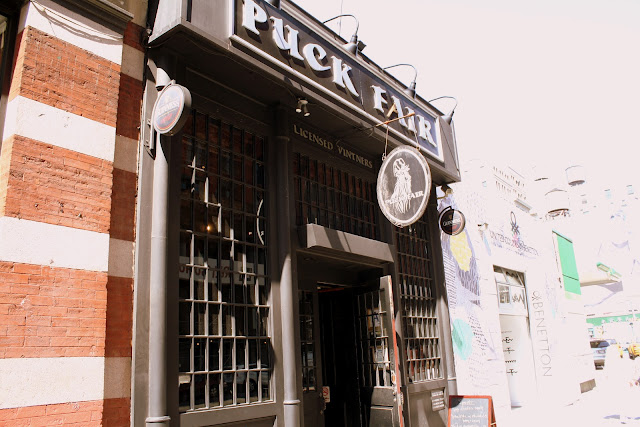 I was meeting up with Elizabeth for lunch; she told me to pick a place. I gave her three options: burgers, sandwiches, or pub food. She told me any of them were fine.

"Well, then, let's go to the pub," I said. Puck Fair is only four blocks from her office in SoHo. (It's on Lafayette, the border street of SoHo and NoLita, if you care about such things.) 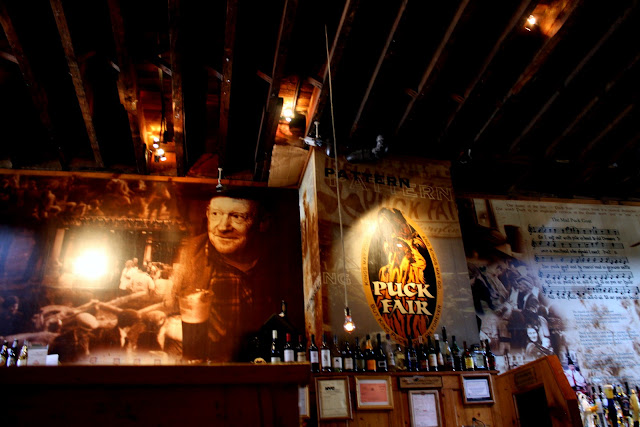 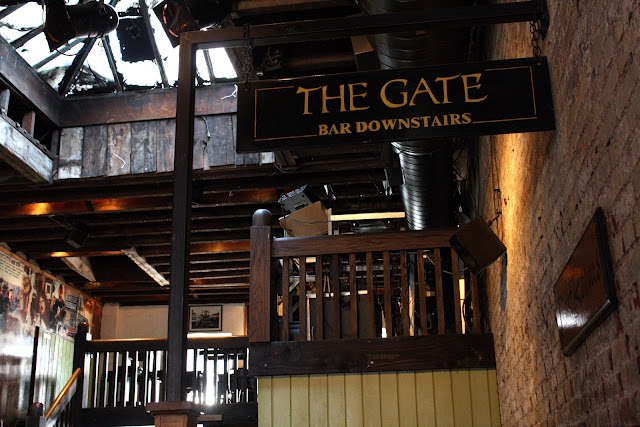 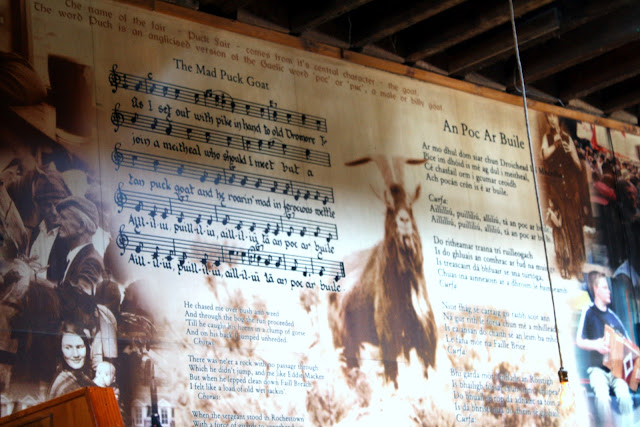 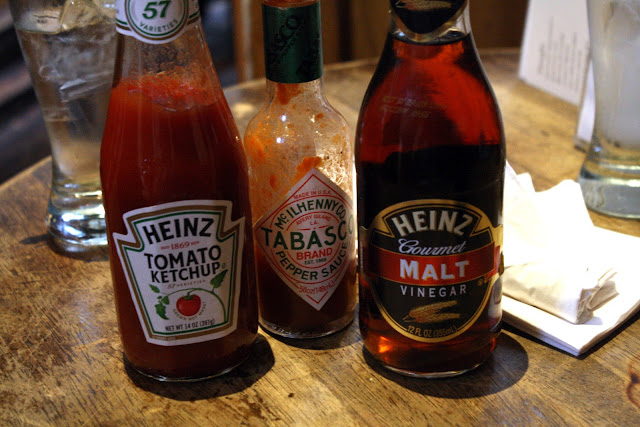 I liked it immediately inside - it was just dark enough, with murals and song lyrics painted on the walls, a long bar, an upstairs balcony and, apparently, another bar downstairs. 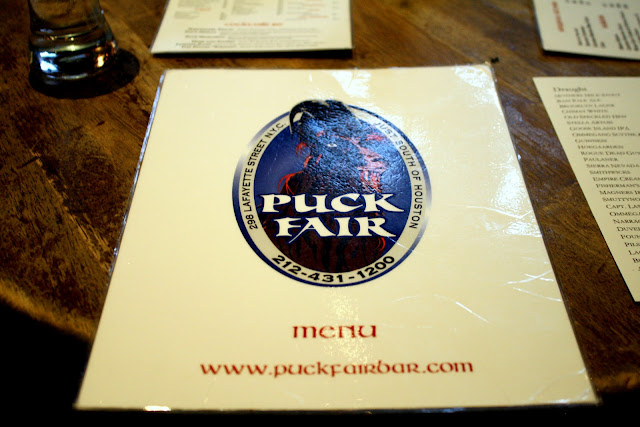 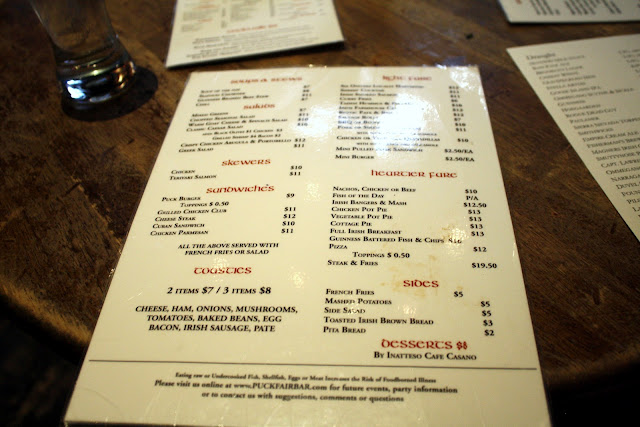 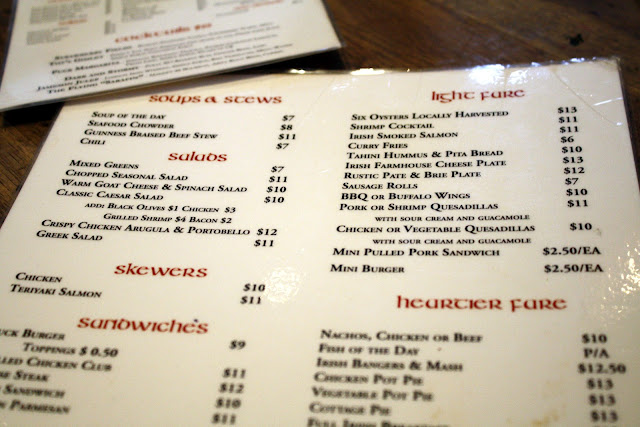 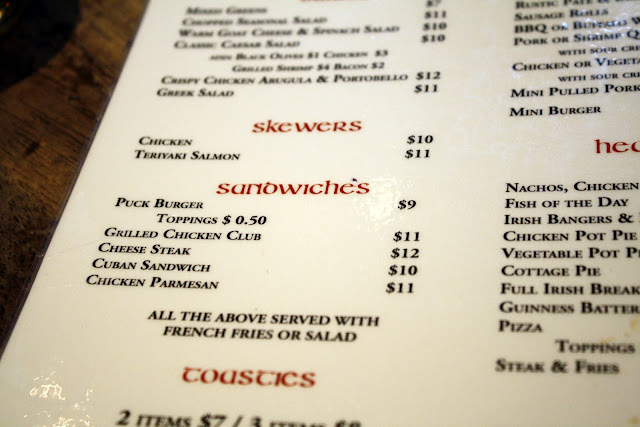 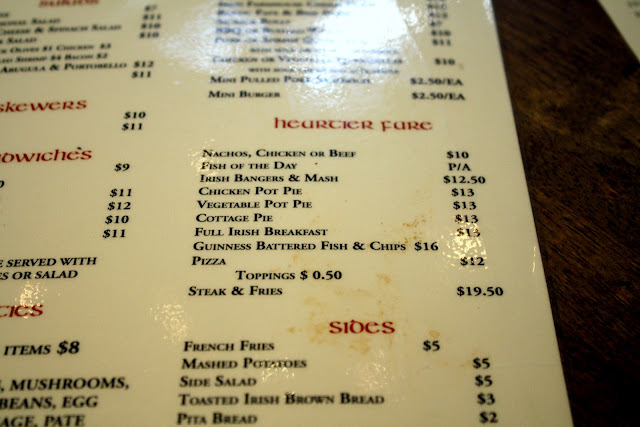 The menu had everything I want to see in a good pub menu: sandwiches, Guinness stew, and sections divided into "light fare" and "heartier fare." (In pubs like this, "light" usually refers to the portion size, not the calorie count, which is why you see things like curry fries and buffalo wings listed.)

Can you guess what I ordered? It's one of the heartier items. 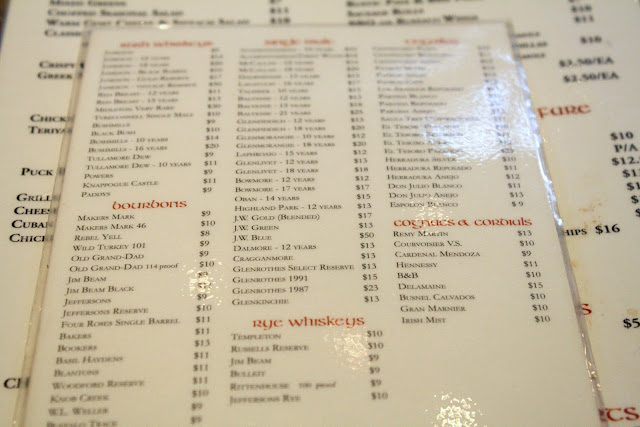 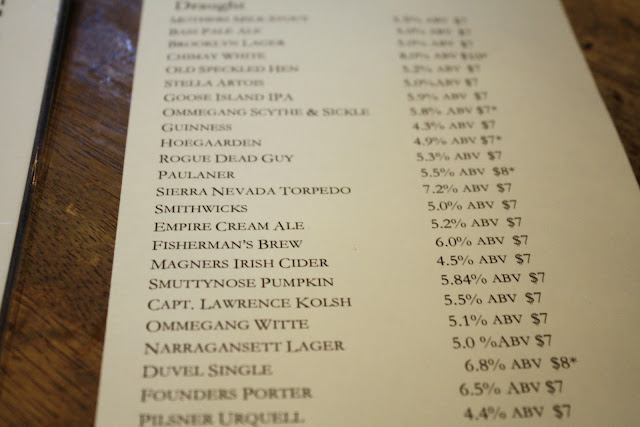 There is an extensive whiskey list and a nice beer list. I have not ordered a whiskey in more than eight years and I certainly wasn't going to do it for a weekday lunch, but there was no way I could visit a place like this and not try a pint of Guinness. 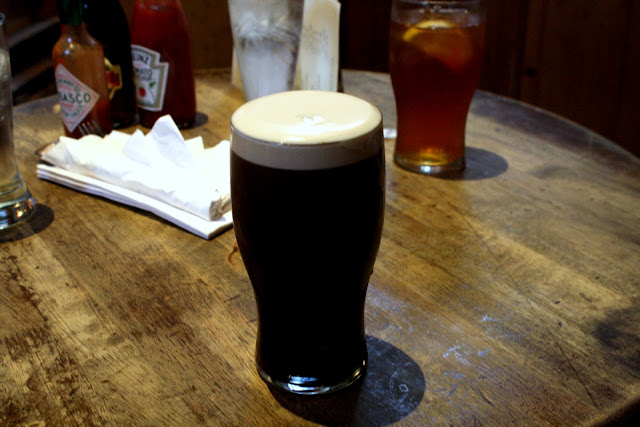 It was a beautiful pint, the best I have had in New York so far (which is not an extensive list, but still). It had a creamy head and a pleasing, light taste. Many people assume that, due to the dark color, Guinness is a heavy, high-calorie beer. It's actually much lower in calories and alcohol content than almost all other stouts.

There was one way to tell its quality for sure:

"Try this," I said to Elizabeth, who had ordered an iced tea. She does not like Guinness, though she is willing to try a sip once every year or so when I tell her I've found a really good one. She took a sip.

Trust me, that is very, very high praise. 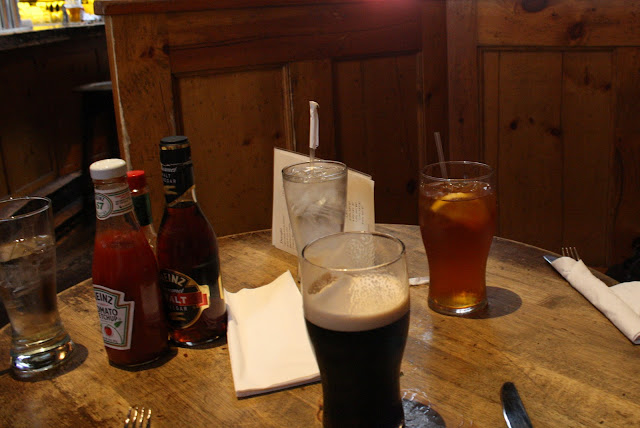 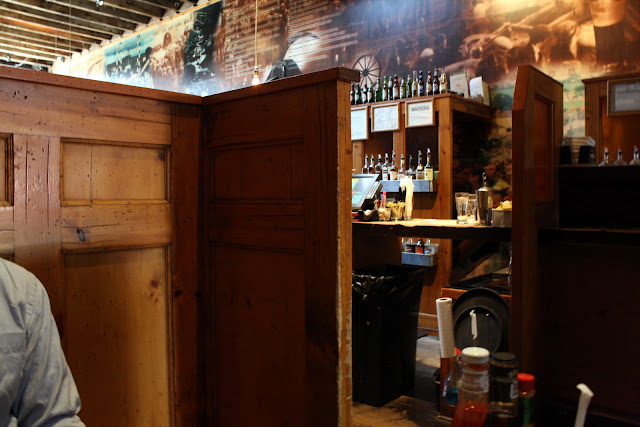 I asked Elizabeth, who was sitting in a better vantage point than I, to take a couple of pictures of the enclosed area in which we were sitting. Maybe not quite a snug, but close enough. 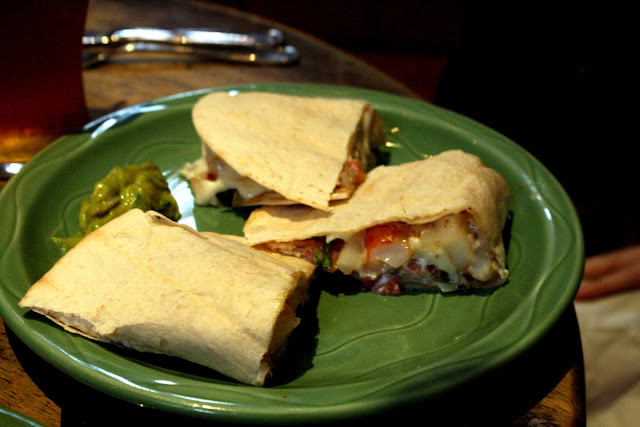 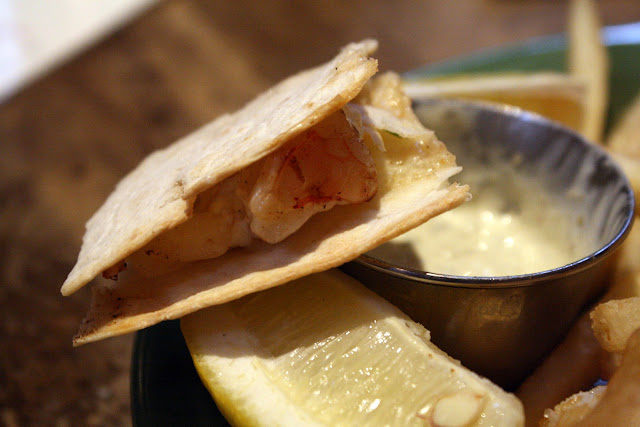 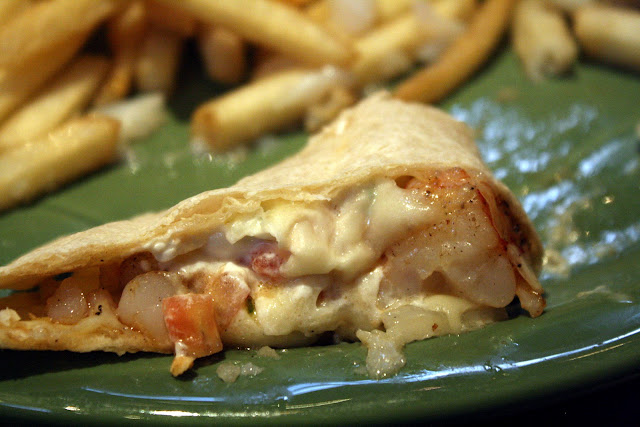 Elizabeth got the shrimp quesadilla. It was a larger portion than we were expecting and she gave me a bite as soon as it arrived. I loved it: the shrimp were huge and meaty and tasted much closer to lobster than shrimp. Almost like those fantastic Argentinian red shrimp from Trader Joe's. Elizabeth couldn't quite finish the thing - she helped me out with my fries - so I got to eat the last two-bite piece of her quesadilla, too.

Normally I stay away from seafood quesadillas in restaurant, and especially bars. There is just too much opportunity to serve inferior pieces of seafood at a big markup, knowing the customer most likely won't be able to notice the difference when the offending protein is mixed with cheese, veggies, and a grilled tortilla. This was the best seafood quesadilla I have ever had in a restaurant. 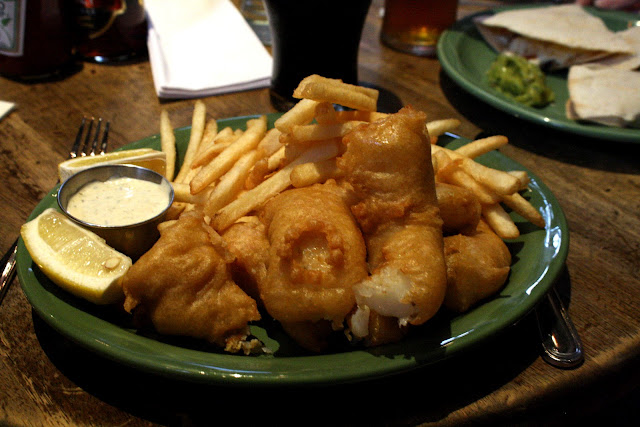 It was the Guinness-battered fish & chips for me. Was there really any doubt?

I don't believe I have ever received more fish as part of a fish & chips order. There were six pieces here, all of them glistening with oil and emitting that wonderful aroma of fish right out of a fryer.

Of course, who cares how many pieces you get or what they look and smell like if that don't taste good, right? 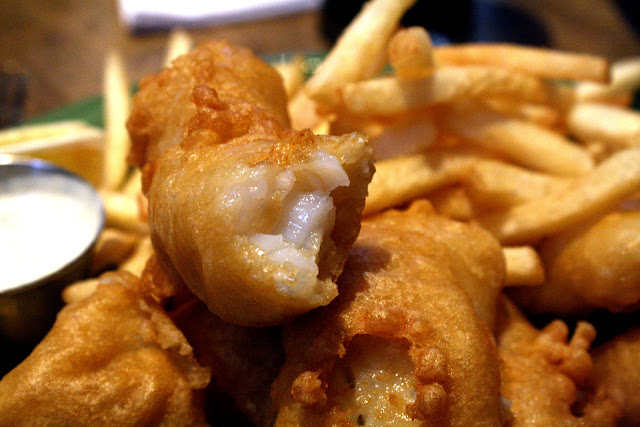 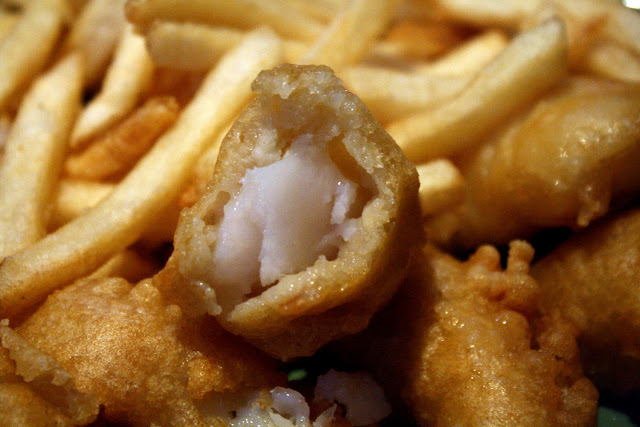 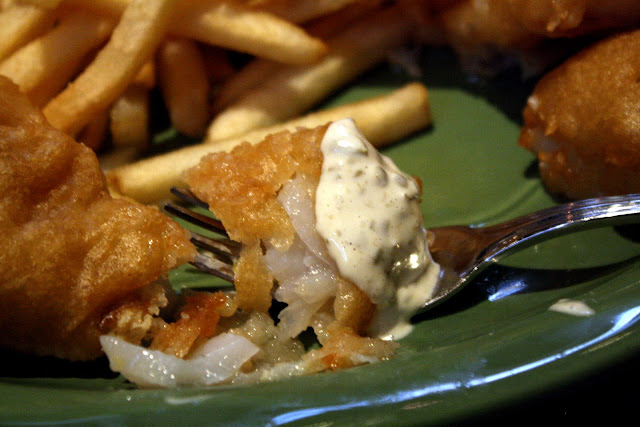 The batter had a nice flavor but it was a touch too soggy for me. The fish was magnificent - fresh, juicy, flaky, with nary a dark spot in all six pieces. (If you took the ultra-crispy batter from Chip Shop and encased this fish with it, you would have the single best fried fish I've had on this side of the Atlantic.)

And yes, I ate all six pieces, minus a couple of bites I gave Elizabeth. I was getting full after three pieces, but I didn't want any of this to go to waste. And I wasn't going to take any home with me; it would never again be as tasty as it was at this moment. 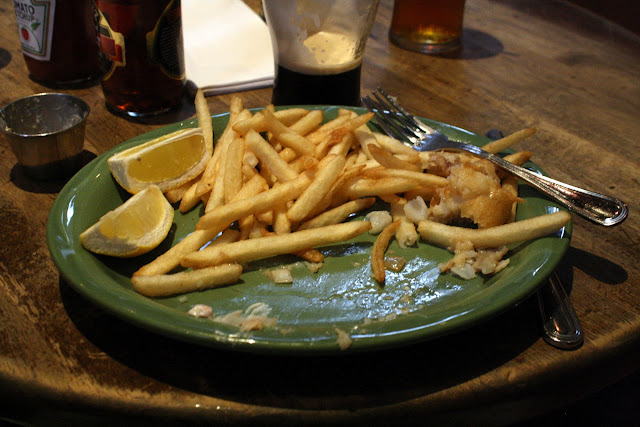 The fries were a disappointment: they were just previously-frozen fries like you buy at the grocery store. Fried fish this good really deserves better, like the fantastic chips from Chip Shop or the hand-cut fries from nearby SoHo Park. But, to be honest, I didn't really care. I filled up on the fish and left myself no room for fries. The above is what my plate looked like when I was finished. (Well, almost - I did eat that one little piece of fish on the right of the plate.)

Normally when I meet Elizabeth for lunch I walk to her office to work up an appetite - it's 3 miles on the dot - and take the subway home. After this lunch I decided to walk back, too. Exercise burns calories (I think) and I consumed a fair amount here, but it was worth it. I really liked my lunch. A wonderful pint of Guinness and great fried fish.

There are still a lot more places I want to eat before I return to Puck Fair for food, but I will stop by the bar and have a pint of Guinness any time.
Posted by JustinM at 10:00 AM

I was amazed at how good the quesadilla was. And the batter on the fish so tasty but definitely needed to be a bit more crisp.