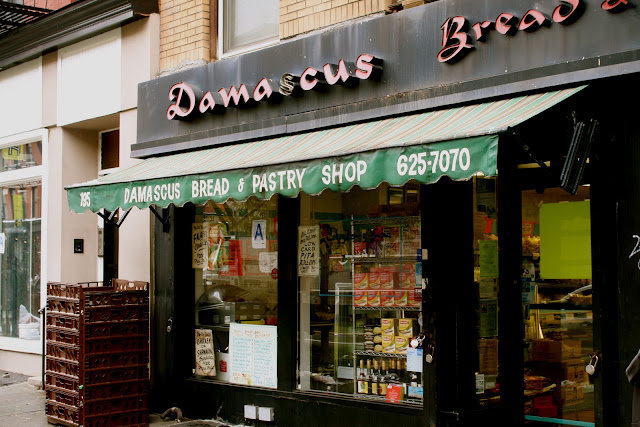 I've mentioned how staid I find most of the food options in Brooklyn Heights, but down on Atlantic Ave, the southern border of the Heights, are a few Middle-Eastern joints that offer some great food. Sahadi's seems to be the most popular, and I certainly like it, but next door is Damascus Bread & Pastry. I'm new here so I'm no expert, but I can't quite figure out why it isn't as beloved: everything I've had is just a little bit better at Damascus. 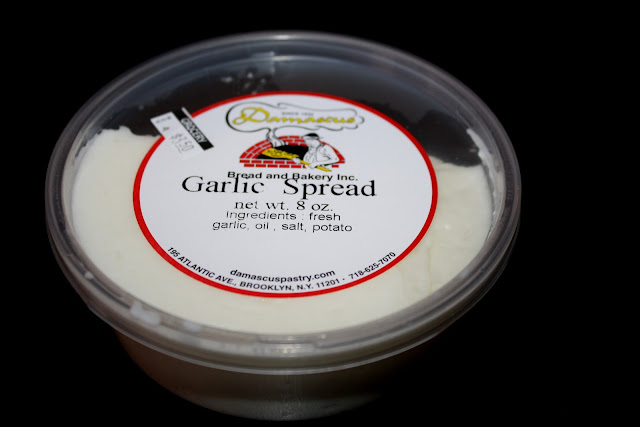 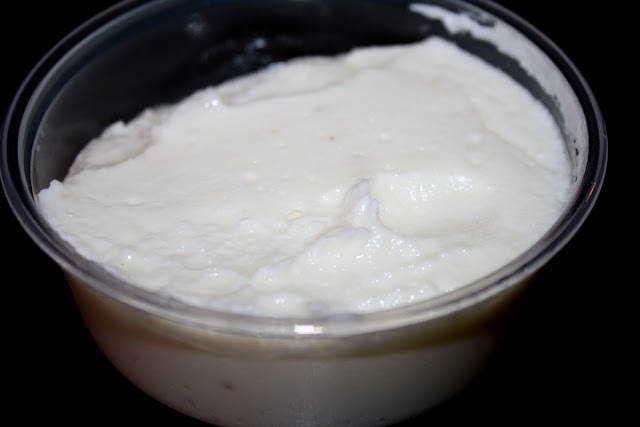 I have to start with the garlic spread. I have never had anything quite like this. The obvious comparison is Zankou Chicken and their garlic sauce. Remember that Justin Bieber/Clash analogy I used a few weeks ago? That doesn't begin to do justice here. I have never, ever tasted something as strongly spiked with garlic as this sauce.

Here come three words I never thought would cross my lips, three words I always assumed I would be even less likely say than "Let's Go Yankees" or "Sweet, Jersey Shore":

Now, don't get me wrong, I finished the first container within two days of buying it - I unleashed a burp after slathering this on a White Castle burger that I am relatively sure Elizabeth will be reminding me of until 2017 - and I've purchased more since then. I like it. But man, it would actually taste better if there was a less pronounced garlic flavor. I've finally found something with too much garlic.

This is getting too weird. Let's move on. 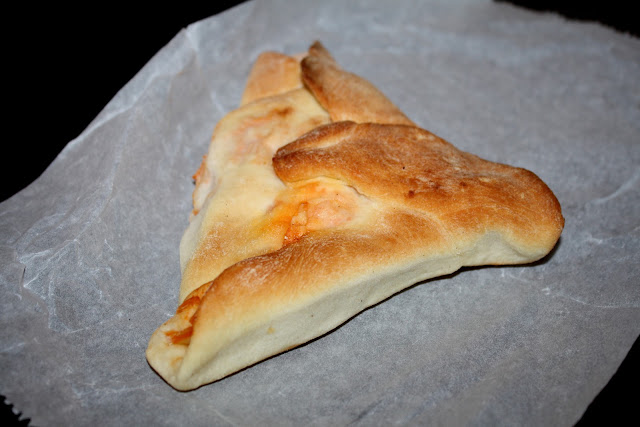 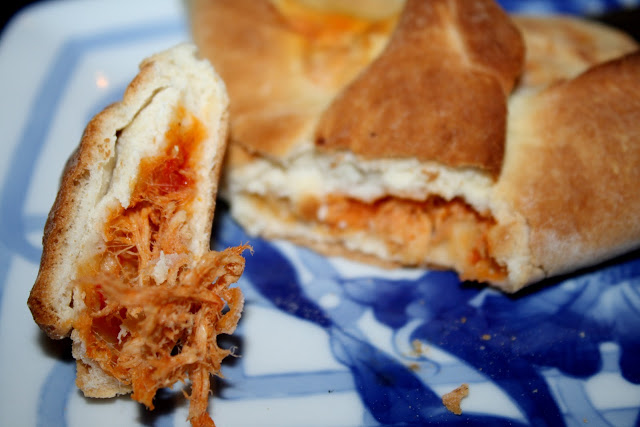 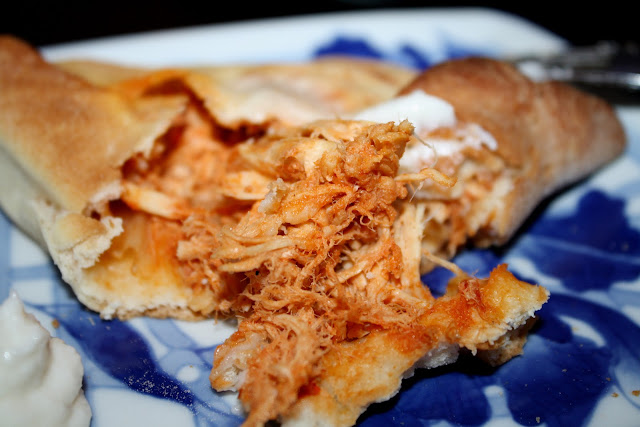 There is a display counter in the front of the shop full of meat/falafel/spinach pies. The first time I visited Damascus, I asked for a spicy chicken pie. The man started to heat it in the microwave for me.

"Or, you're not eating it now, you're taking it home?" he replied. "Then you want to get two pies."

I assured him that if it was good I would be back for more.

It was really good. After heating it a few minutes in the oven, the dough was warm, a touch crisp on the corners and flaky throughout. And the chicken was really tasty. It wasn't spicy, so I slathered a little garlic sauce on a piece, which certainly boosted the flavor but did not really make the pie any better.

And, at $2, it's one of the best deals around. (I paid ten dollars for a pint of beer the other evening, which might have set the new standard for how expensive food and drinks are in this neighborhood.) 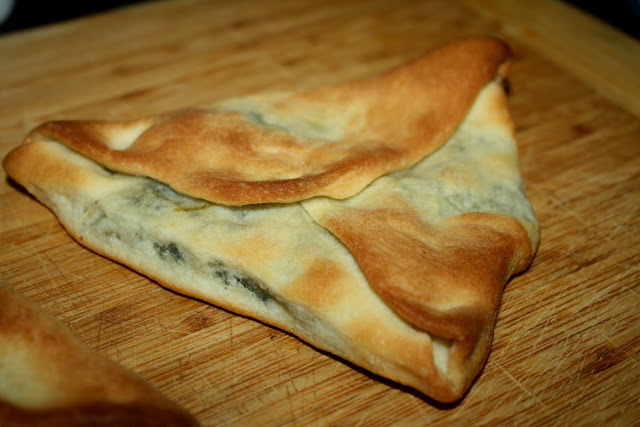 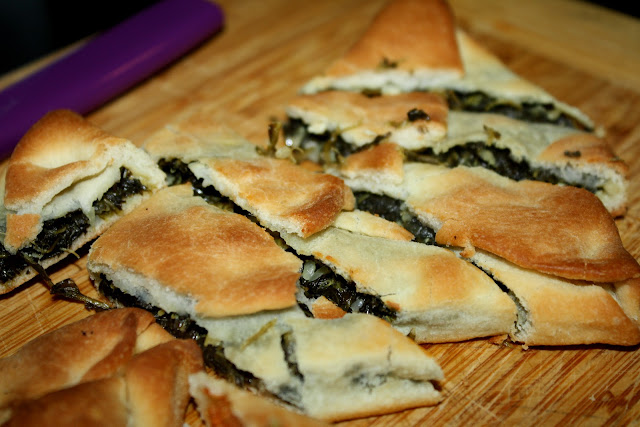 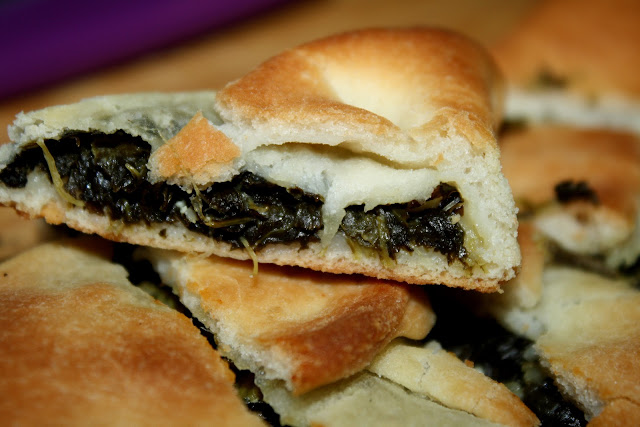 As I told the man I would, I returned (the next day) for a couple more pies, this time selecting the spinach and feta. It was also delicious, though I have to say I liked the chicken a slight bit more. 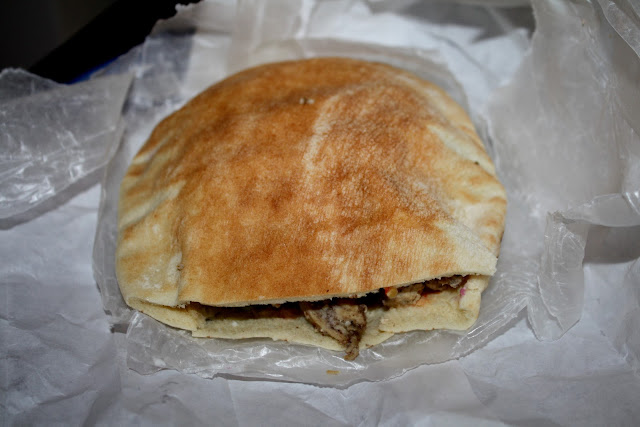 After I had paid for a couple of things on a recent trip and was on the way out the door, I noticed a sign for shawarma. I immediately thought of Ron Swanson: "There is a hot, spinning cone of meat in that Greek restaurant next door. I don't know what it is, but I'd like to eat the whole thing."

Why not, I thought to myself. I was hungry. The sandwich was ready in a minute and I took it home with me. It wasn't until I removed it from the bag that I felt the weight of it; the thing felt close to two pounds. 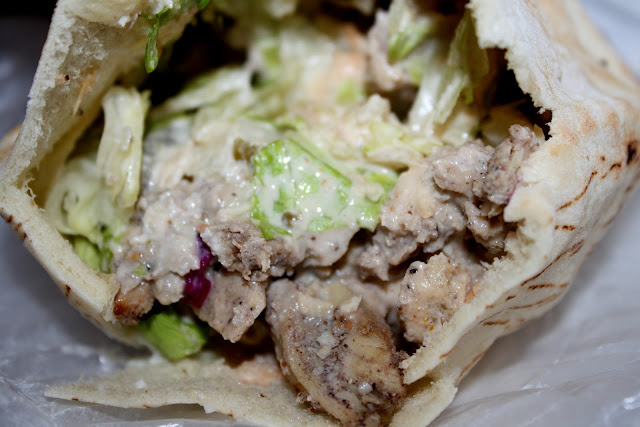 I had asked her to withhold the tomatoes. I had lettuce, cabbage, pickles, white sauce, hot sauce, and chicken, all in a fresh pita. 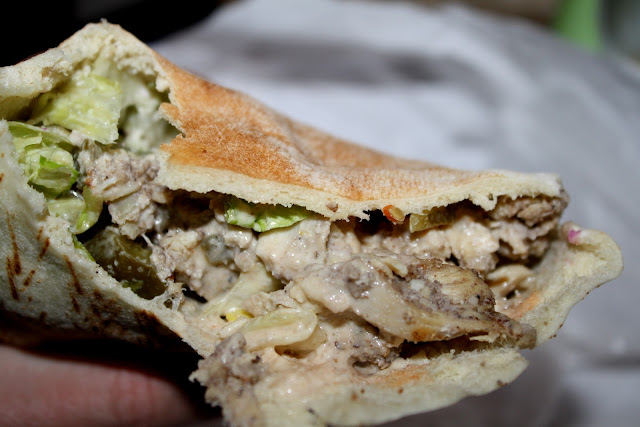 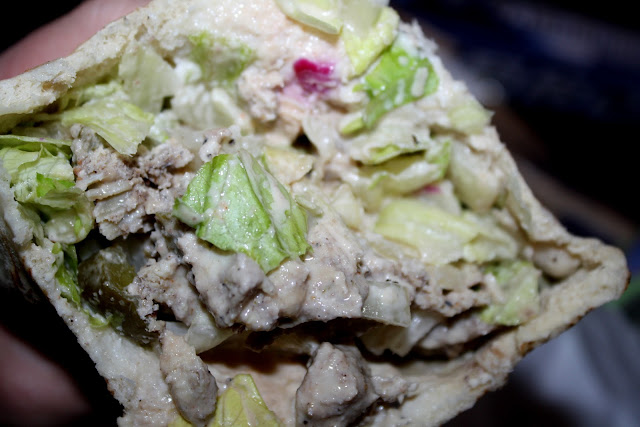 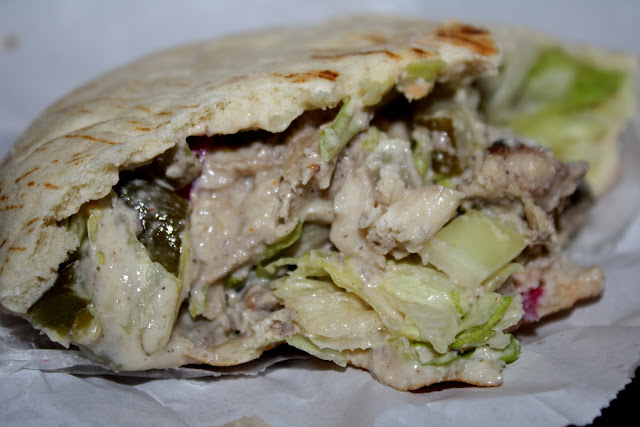 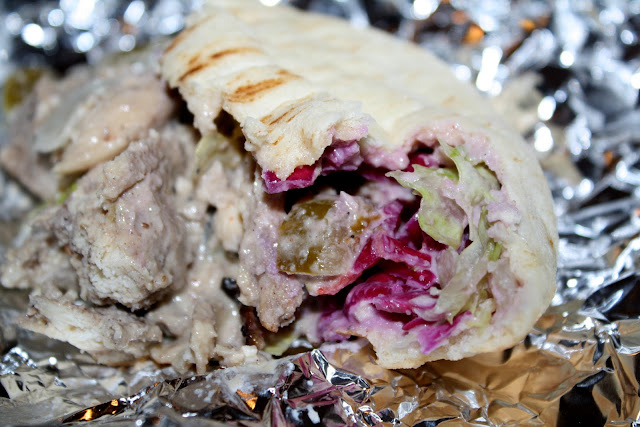 For five bucks, this is an even better deal than the pies. Everything about the sandwich worked together. No, it doesn't replace my beloved chicken tarna from Zankou - what I called probably my favorite sandwich in the world - but it was one of the best things I have eaten in a long time.

Notice how the last photo is surrounded by foil? I hadn't thought I could finish the sandwich so I wrapped it in foil and put it in the fridge. Three minutes later I said "Screw it, I want to eat the rest of it."

I considered going back a few hours later and getting another, but decided to wait. 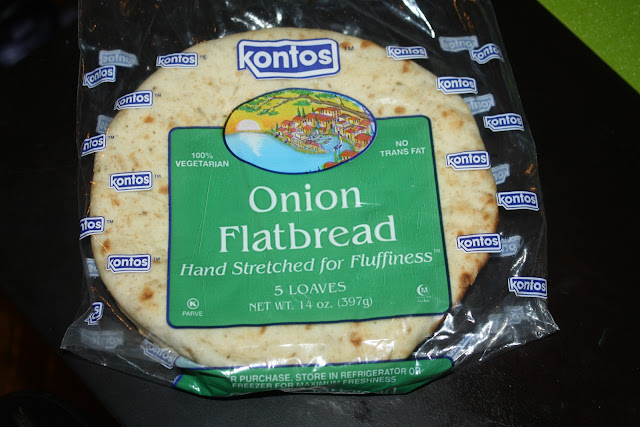 There is also a large selection of flatbreads and pitas. More than one person has called Damascus's pita bread "the best in the world," though I am partial to the onion flatbread, which makes a great base for homemade pizzas, as well as a perfect vehicle for dips when sliced up. 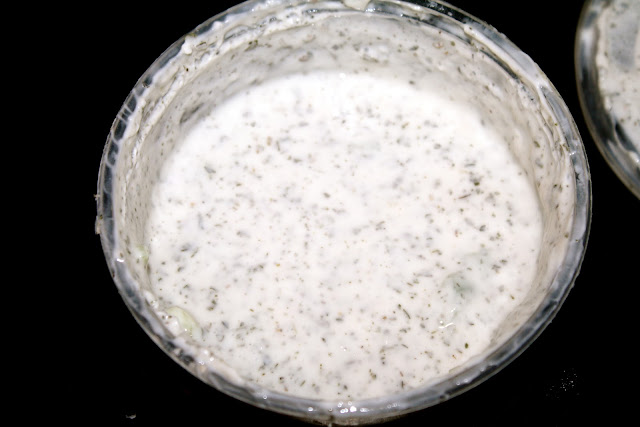 Speaking of dips, Elizabeth loves the yogurt "salad" - yogurt, garlic, salt, cucumber and mint. I think it's fine for a yogurt dip, but those have never been my favorite.

Damascus is definitely a gem and I plan to eat my way through most of what they have to offer over the next few months. They have sujuk and basturma that I have yet to try. In fact, I haven't decided what I am making tomorrow for football-watching. Maybe I should use one of those? We'll see.
Posted by JustinM at 10:00 AM

You could do a recipe taste test. So, I just finished a book & it contained a recipe for Sausage Stuffed Jalapenos (sounds like football eats to me!). It wasn't a recipe book, actually it was a mystery novel. That being said, I'm intrigued as to rather a recipe found in a novel can really be worth anything.

I tell you what: I already bought my ingredients this afternoon so I know what I'm making tomorrow. (And I'm going to California on Monday so I can't just postpone this and make it next week.) But while in CA I will make the sausage-stuffed jalapenos, that sounds good.

Hopefully you'll get some good grill-time while in CA!

I used to live on Pacific Street in Cobble Hill before I moved to Pasadena, CA. I do remember both Damascus and Sahadi's (fondly) though, like you, am a big fan of Zankou's tarna. Now if only I could convince the Zankou people to dump the fluorescent lighting...

First of all - 10 bucks for a pint? Holy crap! I've made the sausage and cheese stuffed jalapeños a couple of times for football games. We can handle the heat, usually, but one time we went to the local Mexican market instead of regular grocery and the peppers left everyone with tears in their eyes. I bake mine ... frying would probably be even better.

You should go to that Mama Maria's/Sal's Pizzeria place that was on Kitchen Nightmares last night!

I went by there a couple of months ago to get a slice of pizza - it looked awful, like the slices had been sitting out for at least a day. I left. When I get back from CA, I'll try it.

The spinach pies look tops! I would go here everyday if I lived nearby. I found a place like this in Little Armenia when I lived in Los Feliz. Looking forward to your future reviews on Damascus!

i just stumbled onto this blog, and love the posts! i'm originally from south pasadena, and moved new york 3 years ago, and brooklyn heights a year and a half ago. what a coincidence! damascus is definitely one of my favorite spots, especially they're homemade pita breads. looking forward to more posts!