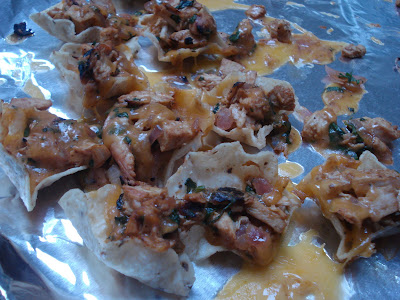 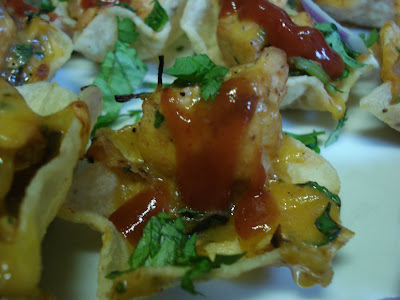 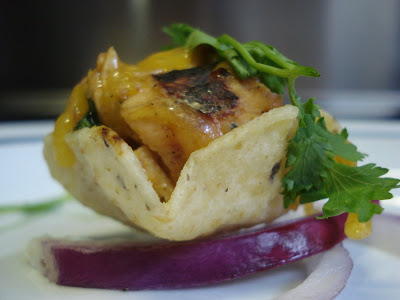 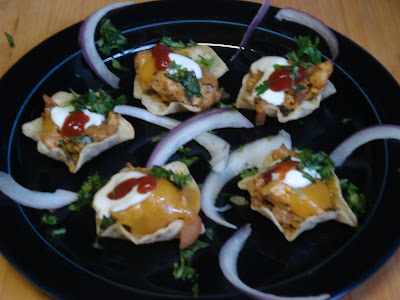 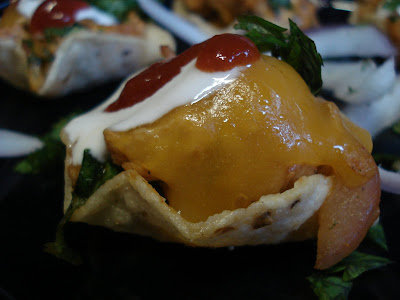 Years ago, in my early 20s, I lived with one of my best friends from high school. I sometimes made dinner for us, and I usually made snacks during sporting events . It wasn't a one-sided relationship, though. He worked for the Ducks - well, the Mighty Ducks then - and he would often get me free tickets to games. I'm not a hockey fan, but watching hockey live is an amazing experience. It's basically a different sport live.

We used to think about what kind of cooking show I would have if I were to get one on Food Network (and, I suppose, if my cooking skills improved 1400%.) But we never could figure it out. It wasn't until years later that I realized what the theme of my cooking show should be: bar food and food to eat while watching sports on TV.

It's much more rare these days that my friends and I get together to watch big games. It's a familiar story: some are married, some have moved away, and most of us just don't get the same thrill from watching sports that we used to. (For the Lakers-Kings Game 7 in 2002, we started drinking beer and watching Hoosiers at 11 AM to get fired up for the game. I don't see any conceivable scenario in which we would do that now.)

Saturday I was over at my parents' house to watch the USC and UCLA football season openers and I decided to make a snack for the game that was a little more than ordinary. I got a couple chicken breasts from Taylor's in a "Polynesian" marinade. I grilled them, then let them cool and chopped them into small bits. I got a bag of Tostitos "Scoops" and placed a little piece of chicken into each chip with some diced, grilled red onion and topped it with some Tillamook cheddar, then baked them in the oven for about ten minutes. When they came out I sprinkled some chopped cilantro on each.

The first round were really good, so I got a little fancy (read: pretentious) with the second round. I threw a few slivers of red onion on a dark plate, arranged a few chips on it, then placed a small dollop of sour cream on each. Then I added I drop of Taco Lita hot sauce to each. Pretentious or not, they were probably the second-best nachos I have ever had. (Years ago in New Orleans my friends David, Dave, Carla, Min and I split an order of pulled pork nachos at Silk O'Sullivans in the French Quarter that were one of the top ten culinary revelations of my life.)

There are a couple more big games this coming Saturday (USC vs. Ohio State and UCLA vs. Tennessee, although I expect both games to have the opposite outcome of what I want) so I might make these again, although I am toying with the idea of making a variation of nachos with pulled pork.
Posted by JustinM at 11:09 AM

HAHA! You would kicked my butt if I had ever wrote anything like this in high school and now look at you! You're getting soft in your old age McDaniel!

Those look extra delicious right now. Salivating at works - thanks!

Yes Silky O'Sullivans Pulled Pork Nachos I remember all of us being amazed that we (you) had not thought of this before. FYI Nola store victim of Katrina, Memphis Silky Sullivans still open (at least it was in 2007 when I was there

The nachos were my second favorite highlight of the day - my favorite was walking into Jimmy Buffett's Margaritaville for the first beer of the day, seeing the crowd of tourists pounding drinks with umbrellas in them, and you and I looking at each and without saying a word walking across the street to Molly's at the Market for some Red Stripe.

(That's highlight 1A; 1B was Min looking aghast because someone was smoking inside the bar. You can always spot the NOLA first-timer.)