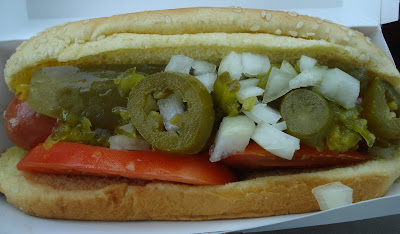 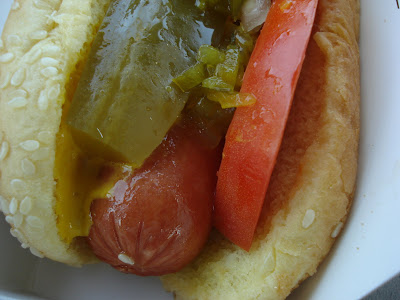 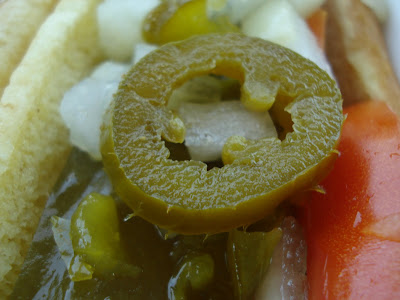 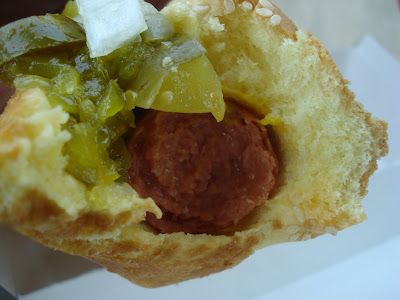 Years ago, my friend and I embarked on a several-week trip around the country. We laid out a few ground rules before the trip, one of which was that we would eat regional cuisines or specialties whenever we could. We came up with a long list of such foods, one of which was the Chicago hot dog. I'd only been to Chicago once, with my dad when I was 19, and we'd eaten at Pizzeria Uno, which was one of the great culinary disappointments I have ever had, comparable only to Corky's BBQ in Memphis. (I've since heard from friends of mine more familiar with Chicago than I am that there are much better places than Pizzeria Uno.) So I was looking forward to trying this other culinary icon of the Second City.

But when we were in Buffalo, planning where to go on the home stretch of our trip, the Chicago plan was set aside because of another rule of our trip: whenever possible, we would visit a lesser-known city, one that we not likely go to again. (For instance, instead of visiting New York, which I have been to twice since that trip, I instead went up and spent the weekend in New Hampshire and Maine.) So instead of driving down to Chicago, we took a car ferry across Lake Michigan and visited Green Bay, Wisconsin, where we ate at a sports bar in the shadow of Lambeau Field, a place that had three different types of fried cheese on the menu.

I thought of this a couple weeks ago when I saw an ad for Wienerschnitzel's Chicago Dog. Of course something would be lost in translation, but what the hell? I haven't been to Chicago in 11 years and I don't have any plans to visit soon, so I might as well take what I can get.

As soon as I opened up the package I realized this was not exactly a Chicago Dog. Wienerschnitzel claims that the dog is served on a poppy seed bun, like true Chicago Dogs. This was a sesame seed bun. A Chicago Dog is topped with sport peppers, which the website Hot Dog Chicago Style refers to as "an essential topping for any Chicago Dog." The peppers on my dog were sliced jalapenos.

And, according to the same website, celery salt is "the defining ingredient of a Chicago Dog." There was none on this dog. (Although Wienershnitzel didn't promise there would be; I can't decide if that makes it better or worse.)

Now, this dog was pretty good, I will admit. I won't ever get one again, but it was not bad. There was tomato, green relish, chopped onions, and a pickle spear. But it was missing three of the essential ingredients. I don't understand why Wienerschnitzel would try to pretend this is a Chicago Dog. If you run out of the ingredients, just take it off the damn menu. I was hoping this trip to Wienerschnitzel in Alhambra would make me feel like I was eating a hot dog under the L on the South Side, and it failed me.

Is there anywhere to get an awesome hotdog around here? Pink's is ok I guess, but nobody I know (including me) wants to haul themselves down to Hollywood to stand in line with busloads of tourists for an hour to fork over five or six bucks for an ok hotdog.

I personally think the best hotdog out there is a Dodger dog.

Actually, I've always thought Pink's is overrated (although admittedly, waiting an hour to get a hot dog late at night is something every Angeleno should do at least once.)

Personally, I would say Skooby's in Hollywood and Carney's in WeHo are my favorites, although I don't remember The Stand in Encino and every time I've tried to visit The Infield something has come up. (The closest I ever came, it was closed and Hatcher and I went to Fatburger instead.)

I have to say, I like Weinerschnitzel's Angus dogs, but the toppings they put on them are not very good.

I have to take my ulcer meds just looking at those pics!

Did you just say Anus dog??