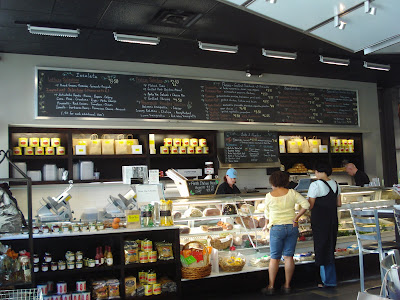 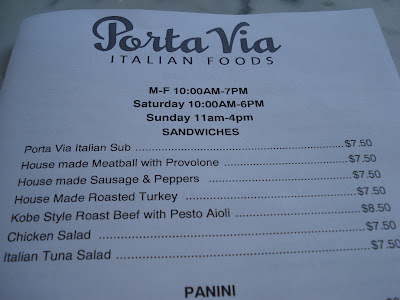 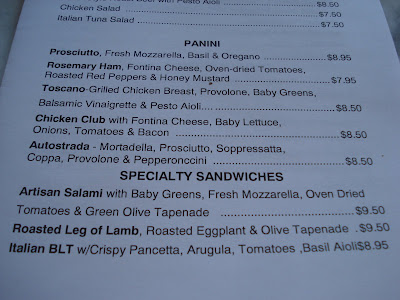 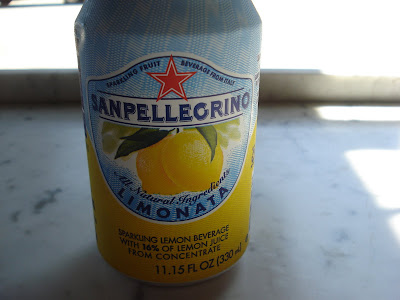 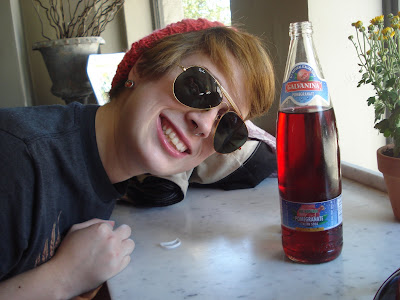 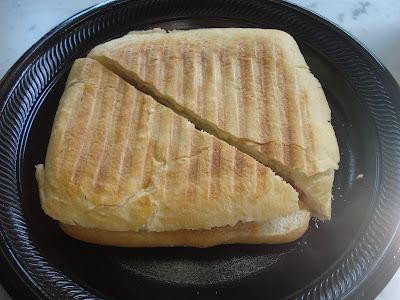 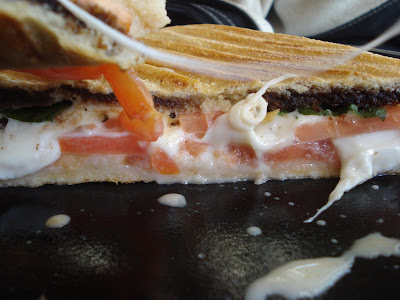 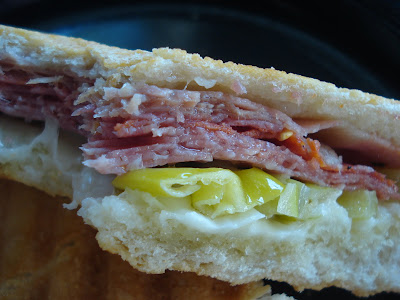 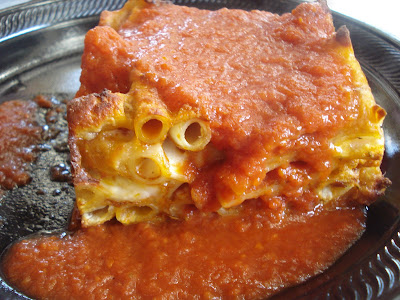 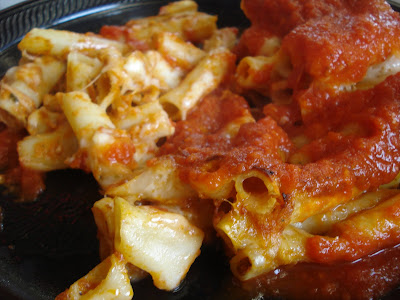 I've written about Porta Via before, about their pre-cooked pizzas. I've gone to Porta Via many times with my friend Tracie for cups of coffee on the patio and when they first opened a couple years ago there were two or three Saturdays when I picked up some food to eat with my dad during UCLA football games. But I've never actually sat there and had a meal. I've always known it would be good - everything I've had to-go has been great and the place is always busy when I'm there - but I've just never done it. (And yet I have no problem driving to Wienerschnitzel to eat mediocre hot dogs. I'm a moron.)

A couple days ago I stopped by with Elizabeth's sisters to have some lunch before I took them on a mini sightseeing tour of Pasadena. ("That's the house I grew up in, that's where I went to high school, that's where Hooters used to be, and, uh, that's about it.") Porta Via has a great selection: in addition to about twenty different kinds of sandwiches, there is an impressive salad bar and dozens of other items available, from pastas to meatballs to my favorite: tri-tip marinated in red wine and rosemary. Kate and I both ordered sandwiches, while Dawn ordered the baked ziti.
It took about fifteen minutes for our food to be ready. We sat by the window and had some cold drinks. I had a San Pelligrino limonata - a sour, sparkling soda. The girls split a pomegranate soda. "Take a picture of me with the soda and put it on your blog," Kate said. I explained that I don't use pictures of people, that I like to keep it just about the food. But she really wanted me to. That seemed like a simple enough request, and besides, it was the day before her 21st birthday, so I told her I would.

My panini was the Autostrada: mortadella, prosciutto, soprasatta, coppa, provolone, and pepperoncini. It was outstanding. Pepperoncinis are one of my favorite condiments on a sandwich, something I think is not used nearly enough. I ate half the sandwich and felt myself getting full, but it was so good I ate the rest of it.
Kate had a panini with roasted vegetables and a balsamic reduction. She liked it very much, although she could only eat half and took the rest home with her. Dawn liked the ziti, but not the crusty pieces of pasta at the top. I did not try either of their items, since I was so full after eating mine, but they both looked good.
I always knew I would enjoy eating at Porta Via, and I did. I've bemoaned the fact that so many non-chain restaurants fail in this town. It's nice to see an independently-owned place succeeding.
Posted by JustinM at 11:00 AM

That sounds better than the store bought Udon noodles I ate for dinner last night!