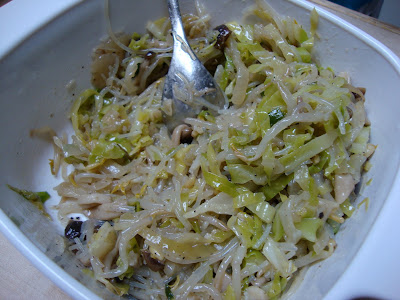 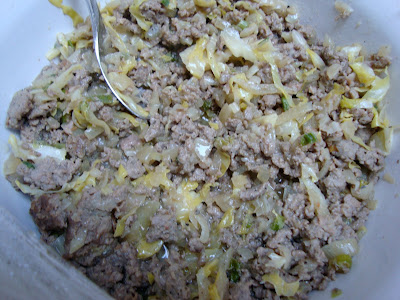 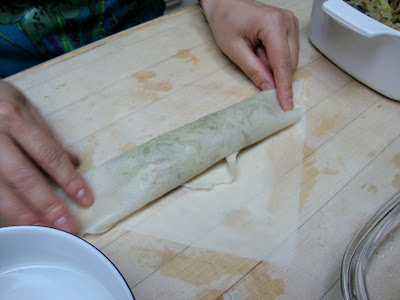 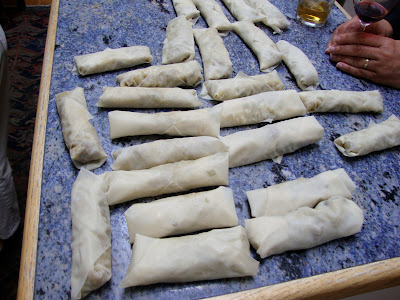 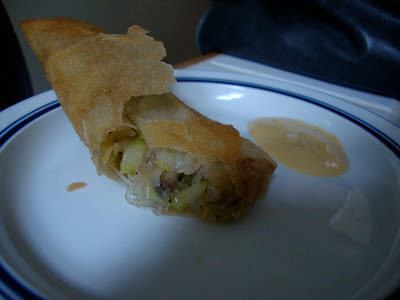 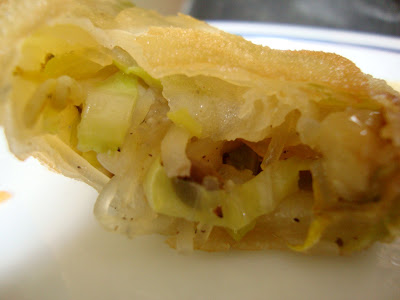 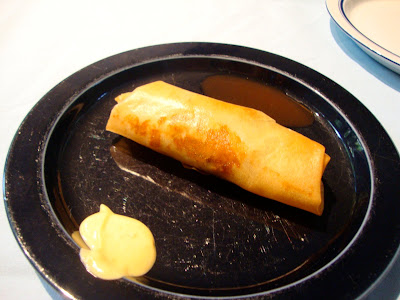 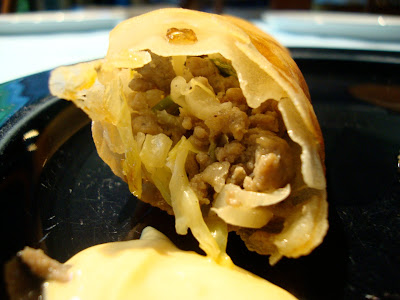 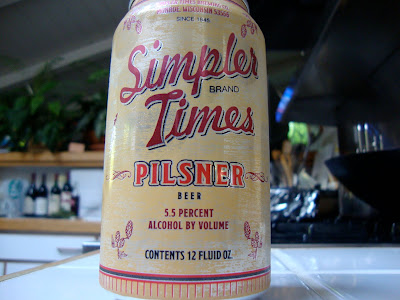 My cousin's wife, June, grew up in China and makes some of the best egg rolls I have ever had - and I've had hundreds. Every time there is a family get-together we ask her to make some, which she always happily does. (I am not exaggerating when I say every time; if she is coming over for a Christmas turkey dinner, we ask her to make egg rolls.)

This weekend, when several of my cousins were staying at my parents' house, June again made egg rolls. (I cooked flank steak, grilled shrimp and roasted potatoes for dinner, but the egg rolls were much more popular.) Since one of my cousins does not eat meat, June made a vegetarian batch as well, consisting of noodles, cabbage and onions. The regular batch had these, but they had pork, too. Very few things in life taste better than pork deep fried in a crispy wrapper.
June assembled all of the egg rolls and fried them in batches. They only take a few minutes to crisp up. The hardest part, of course, is restraining yourself from eating them immediately - they will unquestionably burn the inside of your mouth if you bite into it too soon. (But I'm not saying it's not worth it.) I usually just eat the egg rolls as is, although every few bites I dip them into hot Chinese mustard, a reconstituted powder that makes Philippe's hot mustard seem as sweet as strawberry milk by comparison.
To drink on this occasion, I had a few cans of "Simpler Times" Pilsner. I always get a kick out of this kind of elegiac product branding. When exactly were these "simpler times?" Did they ever really exist? It's like talking longingly about the "Golden Age" of baseball - when, you know, gamblers threw the World Series and only whites were allowed to play the game.
Or is it referring only to beer, and the times when you didn't have the option of drinking beers like Sierra Nevada and Bear Republic? And, if so, is that really a good thing? An older man once saw my friend Jon and me, when we were 22, debating whether or not to buy Sierra Nevada Wheat or Pacifico at the supermarket. He explained to us how lucky we were and that when he was our age he had about three beers to choose from.
Regardless, I had seen the beer at Trader Joe's, $2.99 for a six-pack, and decided to give it a shot. It was better than I expected. I would never order this in a bar or drink it by itself, but the light flavor and carbonation went well with the crispy egg rolls and it extinguished the heat of the mustard nicely. I would buy this again just to have around the house, but if it disappears like most TJ's products do, I won't shed a tear.
The only negative thing about these egg rolls is that it takes at least a week for me to forget just how good they are, and I crave them that whole time.
Posted by JustinM at 9:16 AM

Oooh...will dear June share the recipe? I've been craving me some egg roles...

I can always ask. If she says no it's not like it will be the first time a woman has told me that.

Simpler times when I didn't get to look at pictures of egg rolls at work and drool all over my desk...