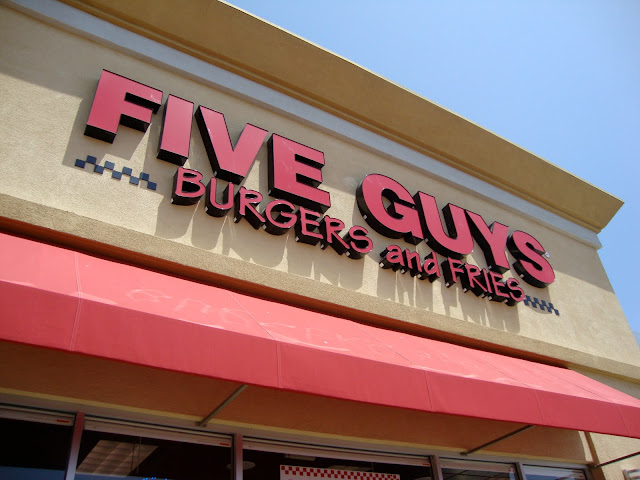 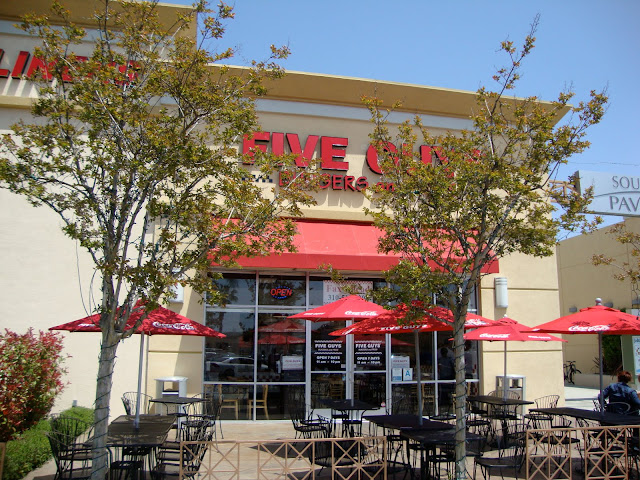 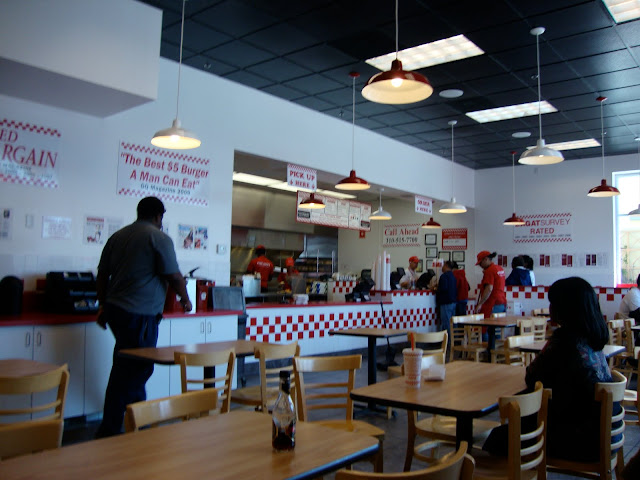 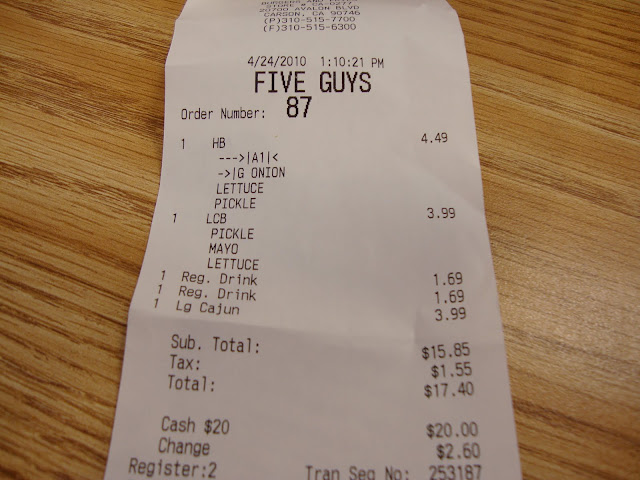 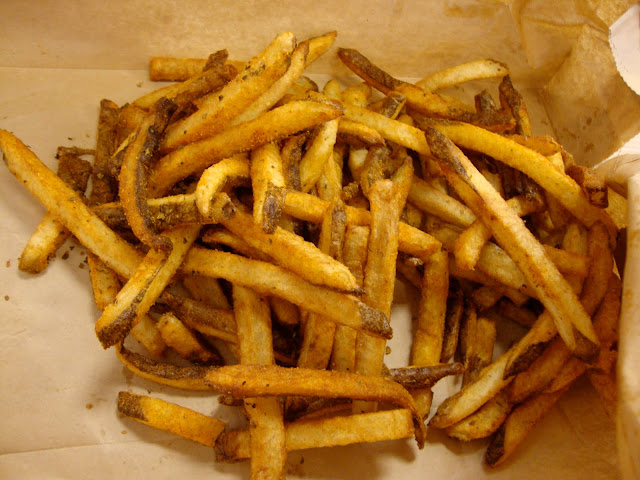 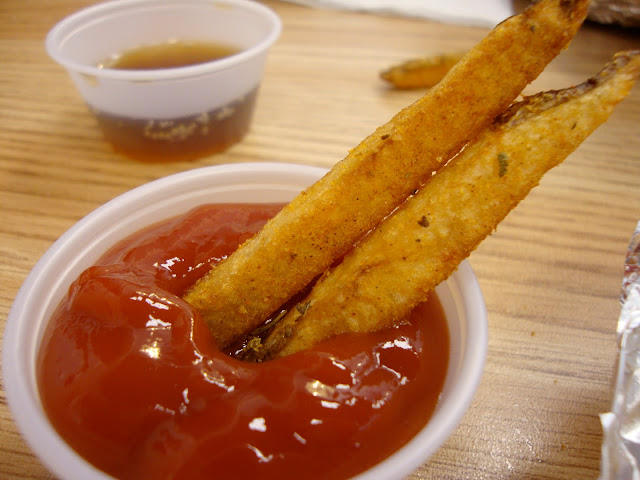 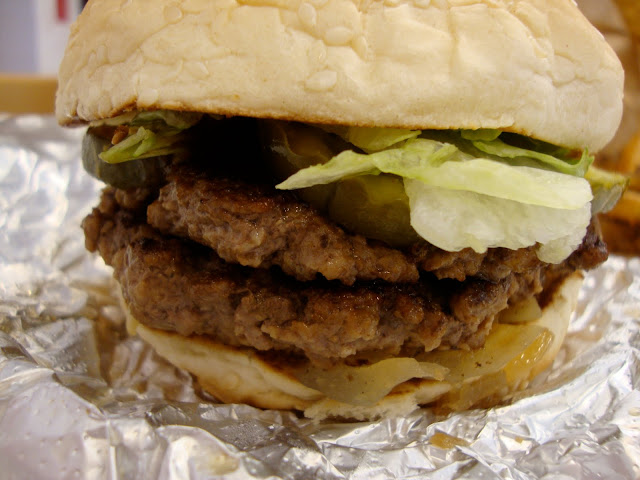 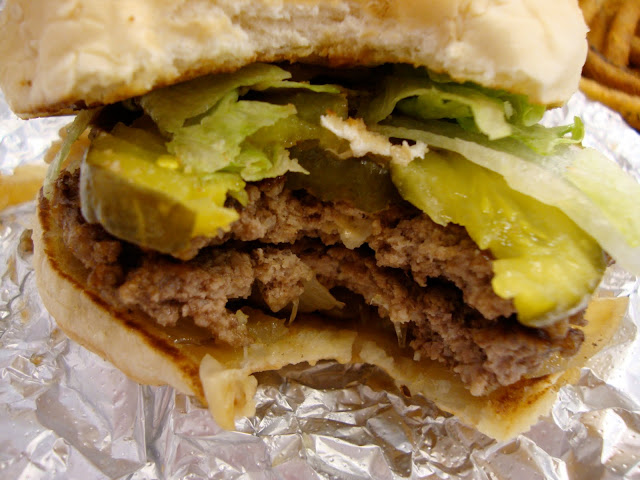 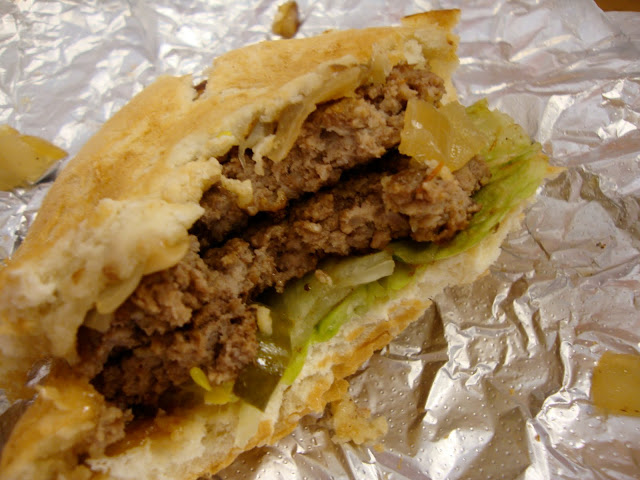 I first heard of Five Guys Burgers and Fries a few years back, descriptions ranging from That's a pretty good burger to This burger is the best in the world. My East Coast friends and relatives inevitably described it to me as "The East Coast In-n-Out," a description guaranteed, if nothing else, to grab my attention. I doubted the veracity of it, though: in a dozen trips to the East Coast, not once did someone say to me "I'm taking you to Five Guys." I cannot count the times I have taken people to In-n-Out when they have been visiting me in California.
With the explosion of food blogging, pictures of Five Guys burgers are ubiquitous on the web. A "Google images" search yields thousands of results. And damn if they don't look pretty delicious. Their fries look much better than In-n-Out's, too. There are two locations in Southern California - Cerritos and Carson - but I never made the trip. It's not so much that I'm lazy, it's more that I only have the time and budget for so many meals. I try to keep things in the Pasadena area as much as possible.
One day not long ago I came across a story about the Five Guys in Brooklyn, New York. Something about the address - 138 Montague Street - seemed very familiar. I looked at an old email and realized why: it is only a couple numbers off from Elizabeth's address before she moved out here.
"You lived next to Five Guys?" I asked.
"Yes," she said. "It's awesome."
That settled it: I needed to try Five Guys soon. On Saturday we had to pick up something downtown and were considering lunch options. Should we take the Gold Line and eat at Philippe's or Spring Street Smokehouse? Should we check out L.A. Live (I still haven't been) and go see the new statue of Chick Hearn outside Staples Center? While debating what to do, I came up with another idea: drive down to Carson, eat at Five Guys, then stop downtown on the way back. This sounded great to Elizabeth.
Although the shopping center - the South Bay Pavilion - was packed, Five Guys was not very busy. There was not a single person in line. This surprised me. (It got much busier; by the time we left there were more than a dozen people in line.) I had read enough about Five Guys to know that their regular burgers come with two patties, so I ordered one of those. You can choose from fifteen toppings for your burger, all free. I selected grilled onions, lettuce, pickles, and A.1. sauce. Elizabeth ordered a "little cheeseburger" (meaning only one patty) with lettuce, mayonnaise and pickles.  She also reminded me of something I had read but forgotten: their orders of fries are massive and we could easily split one. I ordered a large (I wanted to see how big they are).
The food was ready in a few minutes. They aren't the most attractive burgers, but then again in matters like this there is only one thing I care about: the taste. And this burger was awesome. Life changing? No. But a great burger, much better than almost all fast food burgers. It reminded me of the way Fatburger used to be. The fries - I'd ordered them cajun style - were indeed a huge portion. We did not come close to finishing them. A small order probably would have been enough for the two of us.
Elizabeth gave me a bite of her burger so I could see how they taste with cheese. I didn't much care for it. While I love cheese, in my opinion a cheap slice of American cheese does nothing to improve a quality burger. Do I mind it on a McDonald's patty? No, not at all. But a grilled patty of fresh ground beef doesn't deserve anything other than great cheese, and if that's not an option, I prefer it plain. I asked Elizabeth if this was as good as the one in Brooklyn; a complaint about Five Guys is that their locations in the West are not as good as the ones back East. She said that the New York location was better.
Any review of Five Guys inevitably includes an In-n-Out comparison, so I will refrain. A lot of people seem a little too eager to make the comparison, usually not to be informative but to slam one of the two places. It's a different kind of burger than In-n-Out. A more apt comparison would be The Habit - grilled the same way and offering a variety of toppings. If there was a Five Guys in Pasadena I would certainly eat there on occasion. I don't see myself ever driving down to Carson again to eat there, but I am glad I did it Saturday.
Posted by JustinM at 8:45 AM

The Cerritos location is close enough to my office to make a run this Friday. I'll do a complete investigation.

Woah, I had no idea that one was so close! We used to go quite a bit in Virginia, but haven't been since then. I'm not sure I'd elevate them to In-N-Out level, maybe because they are different experiences in my mind.

once again, an awesome review, PP!

$ for $ the In N Out is what a great burger value is all about.

Although, I like Rick's burgers, AND the double-burger at Del Taco! More xpensive of course which is always the case in comparison to the InO.