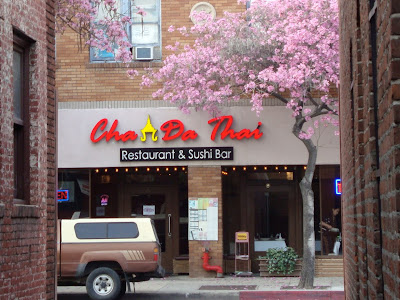 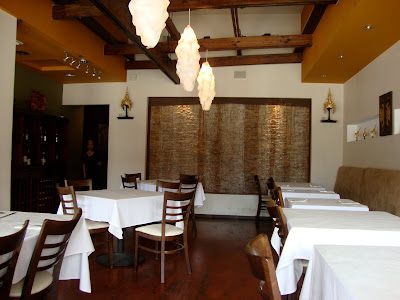 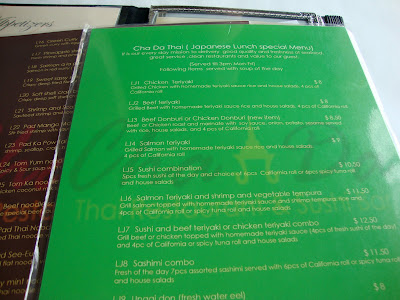 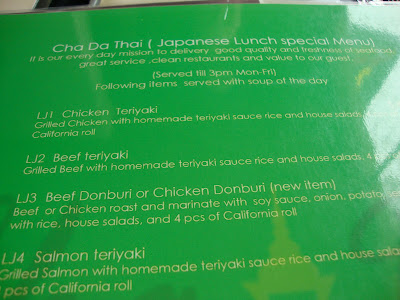 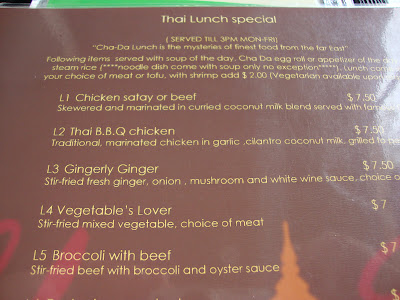 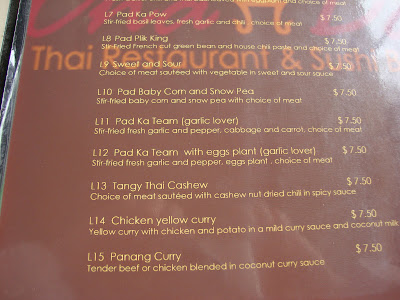 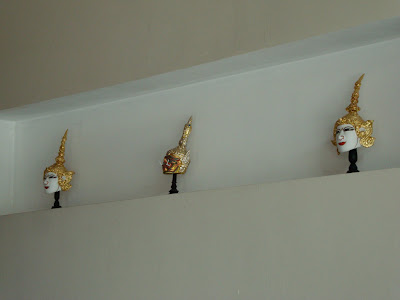 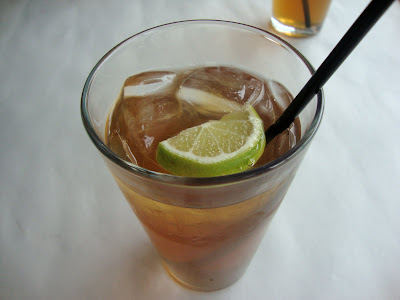 I have a friend who gets fixated on a particular restaurant and eats at it as much as possible, until she decides she doesn't like it anymore and moves on to the next place. Over the years the restaurants have included Kuala Lumpur, Ari-ya, Gus's Barbecue, and even P.F. Chang's. The two of us drove from Los Angeles to Minneapolis together a few years back, and in northwestern Nebraska (we were on our way to Mount Rushmore) she asked me if I thought "there might be a P.F. Chang's around here."

(We got sandwiches from Subway and ate in her car on a small-town street where 75% of the storefronts were deserted, listening to Springsteen's Devils & Dust.)

For the last few months, my friend and her husband have been eating at Cha Da Thai as often as possible. When they first mentioned it to me, I knew nothing about it, other than it being the old location - on Holly Street just east of Fair Oaks - of a previous Thai restaurant, NaNa. I ate at NaNa once after reading a great review, and it was simply one of the biggest restaurant disappointments I have ever had in Pasadena.

Cha Da has a happy hour from 4-7 every day, and I thought about giving it a try a few times, but they also have lunch specials Monday-Friday. Recently, Elizabeth had a half-day and we decided to stop by for lunch. This was about 2:30 in the afternoon and we were the only customers. They gave us two different sets of menus: Thai lunch specials and Japanese lunch specials. We both got Thai iced teas and contemplated what to order. (Normally I am not a fan of Thai iced tea, I find it much too sweet, but this was delicious - the perfect balance of sweetness and strength.) 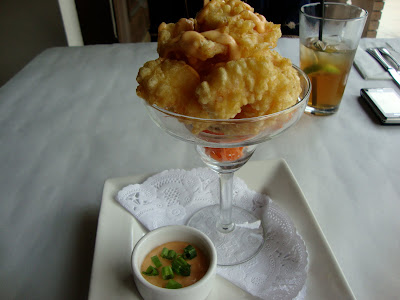 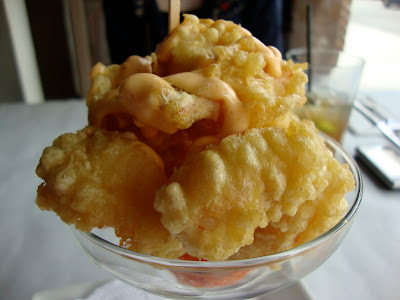 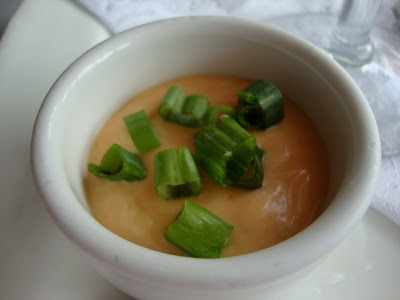 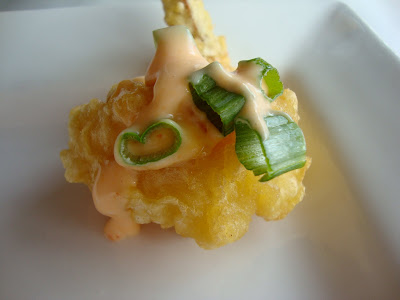 We started with an appetizer of tempura-battered fried rock shrimp with aioli. Charmingly, the menu ordered us to try this: "must try" it read in parentheses, with neither additional punctuation nor capitalization.

Of course, upon getting the dish we were glad that we'd been commanded to; they were delicious. The batter was a little less solid than it should have been - another 30 seconds in the fryer would have been ideal - but the shrimp were tender and juicy and the aioli had a touch of spice to it. 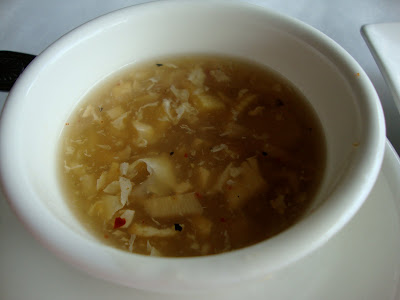 Both of our lunch entrees came with soup, salad, an egg roll, and rice. The soup came out first, concurrent with our appetizer, and it was delicious, the spiciest lunch-special soup I have had in a long time. 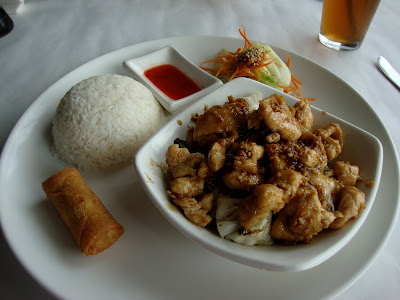 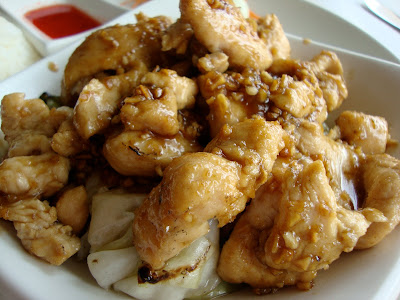 I chose the "Pad Ka Team (Garlic lover)" off of the Thai lunch menu. The flavors promised stir-fried fresh garlic and pepper with cabbage and carrots, with the customer (in this case, me) selecting the protein he or she wants from a choice of beef, chicken, shrimp or tofu.

"What is the most popular choice of protein for this dish?" I had asked the server when ordering.

"Either beef, chicken or shrimp," she replied.

"So everything but the tofu?" I asked with a slight laugh.

"No, the tofu is really popular, too," she added.

I selected the chicken. It was awesome: juicy, spicy and full of flavor. I don't often mention the price of items but I would like to point out that this was $7 for the plate (plus the soup). There may not be a better deal Old Town.

And I can only imagine how much better it would have been if I had eaten it hot. They brought out my entree at least ten minutes before Elizabeth's. After about three minutes I was going to say something, but there was no one to be found. The dining room was deserted. Elizabeth implored me to eat, saying that it was silly to sit there and let my food get cold, but I refused. Finally, after eight minutes a woman appeared and I made eye contact with her. She looked genuinely afraid.

"It's coming, I promise it's coming," she promised, without a word escaping my lips.

(Although I was annoyed, I was not going to say anything other than politely asking "Where is her food?" I once had a Salvadoran friend who, if his food was brought out even 90 seconds before his dining companion's, would demand that they take both dishes back in the kitchen and make them again. Very nice guy... but freaking crazy.) 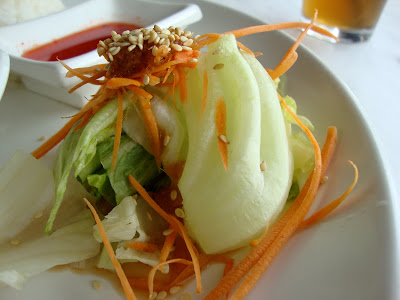 The small salad that came with my entree was also delicious, with a mild sesame dressing that I dipped my egg roll in to as well. 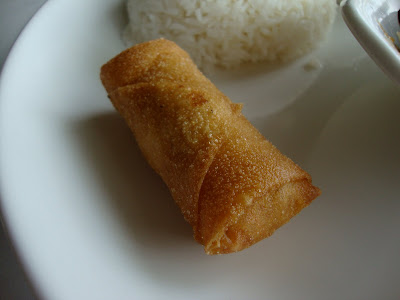 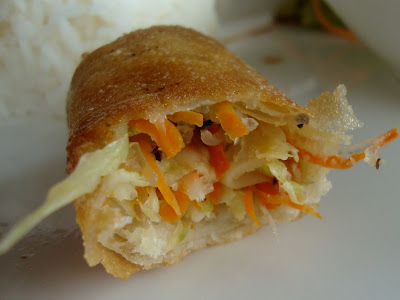 The egg roll was outstanding. Often an egg roll or spring roll that accompanies a lunch special at an Asian restaurant is a flaccid, loosely-packed-with-a-small-amount-of-vegetables disappointment. This one was full of flavor and we agreed that next time we eat at Cha Da we will get an entire order of these. 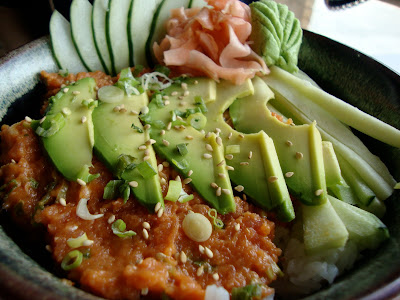 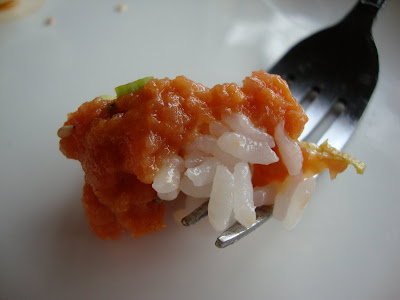 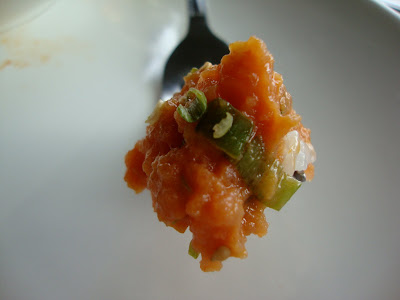 Elizabeth ordered spicy tuna off the Japanese menu, which was served in a bowl over white rice, with several slices of avocado. She gave me a piece (she made sure to fish one out without any avocado on it). It was great. Elizabeth often orders spicy tuna, and too often when I try it I find it to be not the least bit spicy. But this was very spicy and I loved it.

There was not a single thing I did not enjoy. Often when trying a lunch special I find that something - usually the soup or the egg roll - is sub-par. It's not ever a big deal; lunch specials are usually quite reasonable and one little thing is not going to ruin it for me. But Cha Da's lunch special was excellent in every way. I would be glad to return there for lunch any time, or perhaps try their happy hour one of these days.
Posted by JustinM at 9:38 AM

Wednesday evening after the pub I, with genuine curiosty, looked through the window of this restaurant to get a glimpse of what it might hold for the future. It was empty with the exception of a lone diner. It was about 7 PM (not exactly prime time but late enough) so I dismissed it.
Now I have a different perspective. Thank you.
Your Thai Iced Tea doesn't look like the traditional style; condensed milk, etc. I've never seen a Thai Iced Tea without the sweet canned stuff. Interesting...

That is correct, it did not have the condensed milk; it was a dark Thai iced tea, sweetened only with sugar. I much preferred it to the overly-sweet traditional Thai iced tea.

Wow. I can't believe The Two Guys have not heard of this place. Your descriptions and photos make us want to stop what we are doing and go there NOW.

Your blog is the freaking best. You should be world famous. Oh well someday...