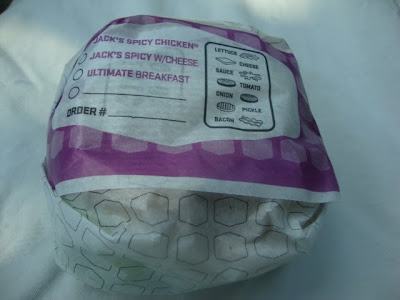 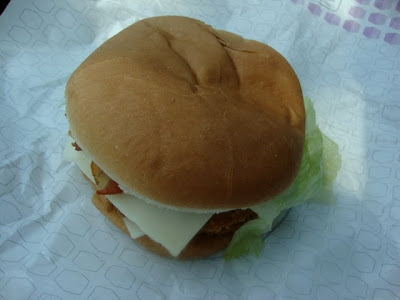 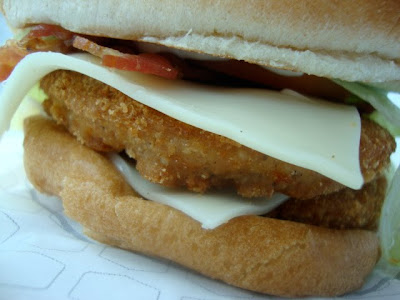 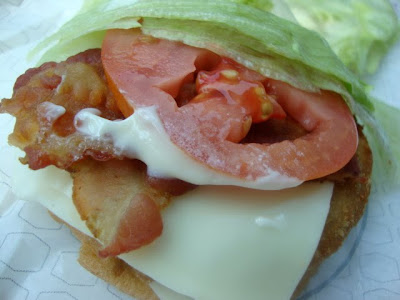 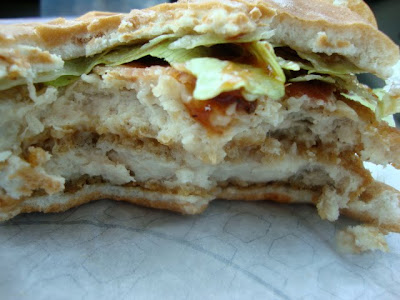 When I first saw the ad for this one, it threw me for a loop. Were people really demanding it? Jack in the Box's pithily named "Really Big Chicken Sandwich," as far as I can tell, is just a regular chicken sandwich with an extra patty. That sounds nice if the chicken is good, but there is a flip side to that coin: what if it's just a regular, crappy fast food chicken patty? Why would anyone want two of those?

But, I have to admit, there are some Jack in the Box chicken items that I like. Their Jack's Spicy Chicken has been a favorite of mine for more than half my life. The ephemeral Spicy Chicken Bites were better than any fast food chicken nuggets I think I have ever had. I even like the Mini Buffalo Ranch Chicken Sandwiches, although the hideous commercial still rings in my ears from time to time.

So I decided to give it a try. (Full disclosure: I had a coupon from a few months ago for one free item at Jack in the Box. I don't think I ever would have spent money - even the $2.99 this costs - on this item.) I stood in line for five minutes while a very large couple ordered 13 items. This is not an exaggeration; I counted as the employee read them all back. I placed my order and waited around for only a couple minutes before another employee thrust the sandwich into my hands. I could tell right away it was not "really big."

I took the sandwich to my car so I could listen to ESPN Radio updates about what LeBron James might possibly perhaps conceivably maybe consider doing. Shockingly, there was nothing definitive to report. I unwrapped the sandwich. It was not the towering sandwich you see in all the ads.

The funny thing about the sandwich, something I never would have anticipated in a million years, is that the bacon was the only good part. I've been served enough fast food bacon to expect a 99% chance that I will discard it immediately. But this was on the crisp side and not terribly fatty (in other words, the exact opposite of what it usually is). The chicken, however, was devoid of almost any flavor. The cheese was that weird kind of inexpensive cheese that won't melt or even deform under any circumstances, including being put under a kitchen torch. The "mayo onion sauce" tasted of neither mayo nor onion. I added some barbecue sauce to the sandwich to make it more palatable. It helped. Sort of.

I can't recommend this sandwich to anyone, but if it actually looks good to you, I'll give you some advice: you might as well get two of Jack's 99 cent chicken sandwiches, remove the patty from one and add it to the other sandwich. You've got the same thing - two flavorless chicken patties on a bun - and you've saved yourself $1.01.

Have a great 4th of July (or, as my English friends call it, Thanksgiving) weekend.
Posted by JustinM at 10:57 AM

Certainly a day's worth of s**tty food.

Crack. Jack in the Box sprinkles their chicken sandwiches with crack. So greasy and wonderful. I am addicted to those darn egg rolls too! And, tacos. God I am pathetic.

They forgot the crack in this one.

But yes, those egg rolls are really, really good. I know a guy who claims to have eaten 20 in one sitting. I am somewhat doubtful of that claim, but I would not be totally shocked if it were true.