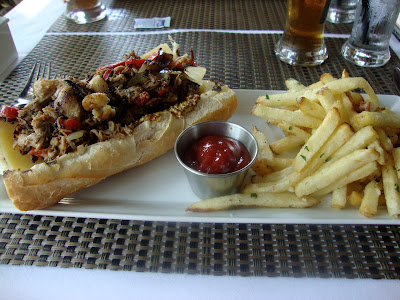 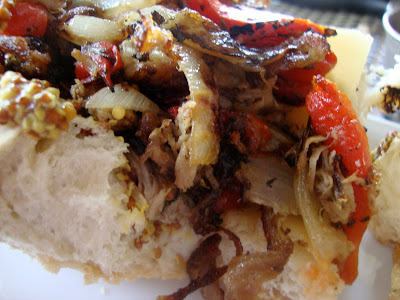 Elizabeth said she would take me anywhere I wanted for lunch on Saturday, which was my birthday, so it wasn't a hard decision: I wanted to sit at a sidewalk table at Green Street Tavern. (The tables are shaded by a big tree so it's never too hot.) I was planning to get my usual order, the wild boar burger, which I have previously written is probably my favorite burger in Pasadena. But there was a special on the menu: a pulled pork sandwich. Obviously, I ordered that.

The pork came on a baguette with roasted peppers and onions and a whole grain mustard. It was very good. The weak link was the bread - it was too hard. I love a hard roll by itself or with cheese, but as a component of a sandwich, I want soft bread that doesn't distract from the main ingredients. 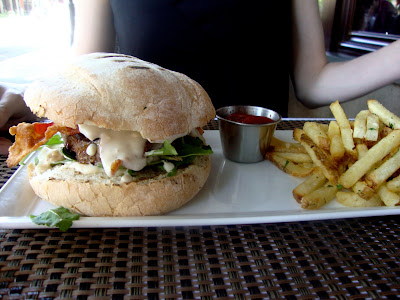 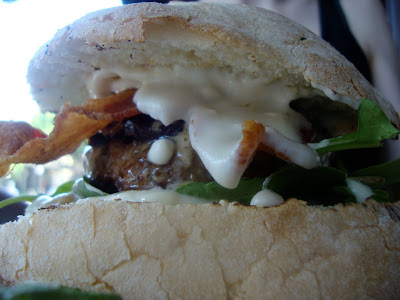 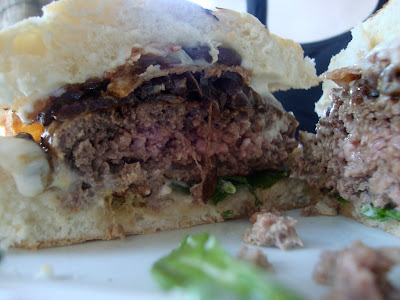 Elizabeth had the "Signature Black Angus Burger." She gave me a couple bites; it was outstanding. (I wish my pork had been served on the same bun as this burger.) This isn't as good as the wild boar burger, in my opinion, but it is still one of the best burgers in town, with excellent bacon and covered with a lake of fondue-like cheese. 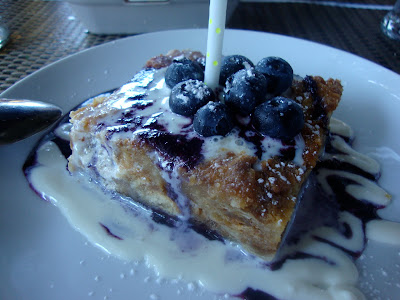 I mentioned to our server, who is also the owner, that it was my birthday. I wasn't angling to get anything from him, just to let him know that of all the places I could have gone for a celebratory lunch, I chose his. He offered us a glass of wine, but this was around noon and I wasn't in the mood for alcohol, so I declined. Instead he brought me a piece of white chocolate bread pudding after I ate. I was was stuffed and could not eat more than a couple bites, but it was fantastic. I have not eaten dessert with lunch in years, but I enjoyed this. 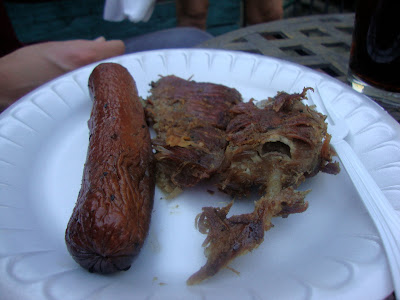 After lunch we did some shopping, then went up to 72 North in the mid-afternoon to listen to some live blues music. There was another birthday party going on and someone had made a bunch of barbecue that we were invited to try. I tried a hot link and a bite of ribs. 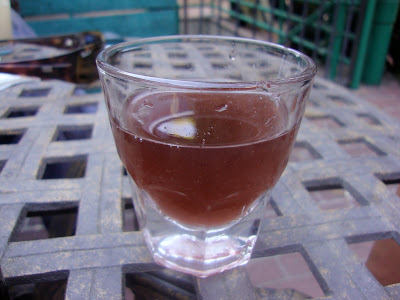 One of the servers knew it was my birthday, although I hadn't said anything. She brought my friends and me some shots. I do not do shots and it's been years since I've had any alcohol other than beer or wine, but I drank this. She called it a "Raspberry Jolly Rancher."

"This tastes just like a raspberry Jolly Rancher!" my friend Murph exclaimed. I'm not sure I've ever had one of those, but I will take his word for it. The drink was as sweet as candy and pretty tasty. But I do not ever want to have one again. 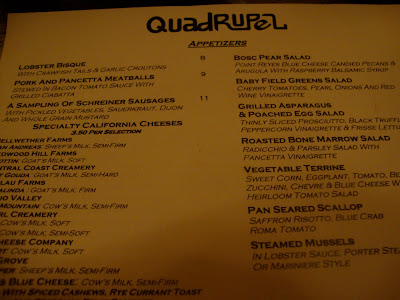 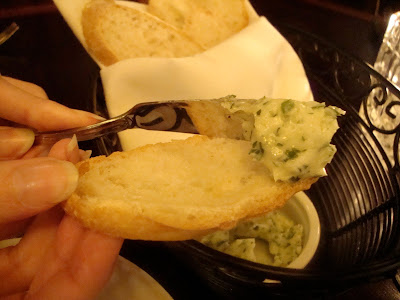 After listening to music and drinking beers with a group of friends for a few hours, Elizabeth and I went over to Quadrupel Brasserie with our friend Carla for some dinner. We had bread and beers and perused the menu; we decided to order a bunch of appetizers. 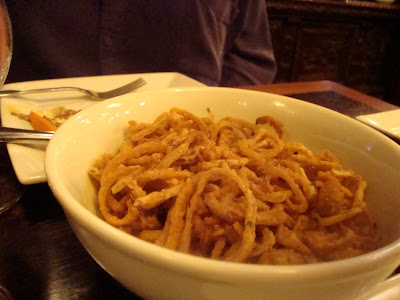 Sweet & sour shallot rings: these were tasty but insubstantial. They came with two dipping sauces, but when dipped, the flavor of the shallots completely disappeared. I do not think I would order these again. 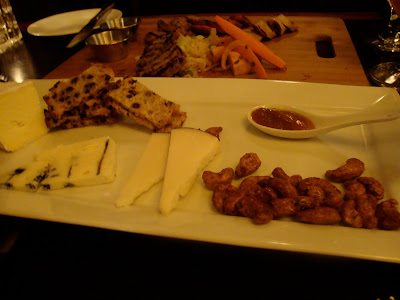 We got three different cheeses. All were excellent. 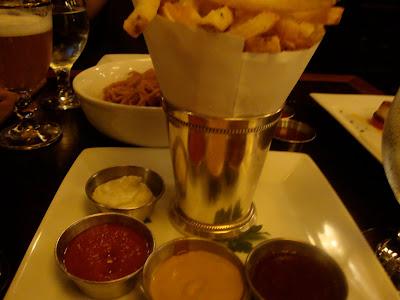 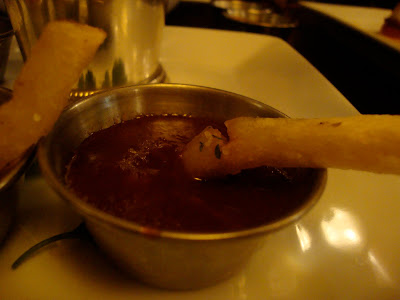 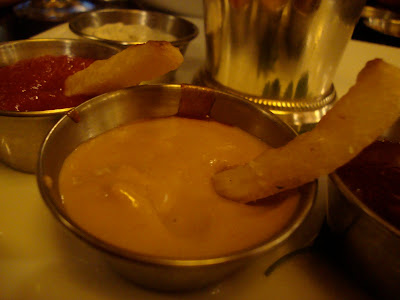 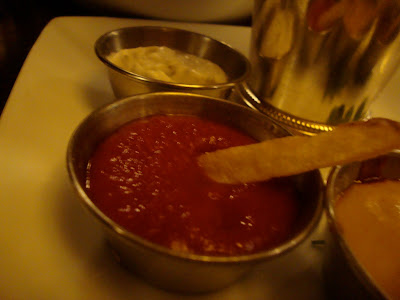 The pommes frites at Quadrupel are served with several dipping sauces. They are my third or fourth favorite in Pasadena, although only the second best I had on Saturday. (Green Street Tavern's fries are my favorite in town.) I could have eaten the entire order myself, which, come to think of it, I probably came close to doing. 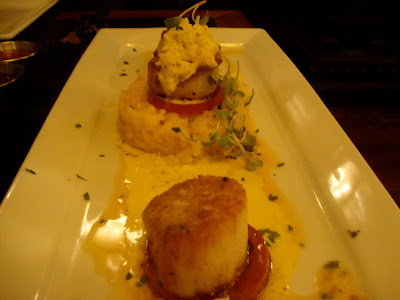 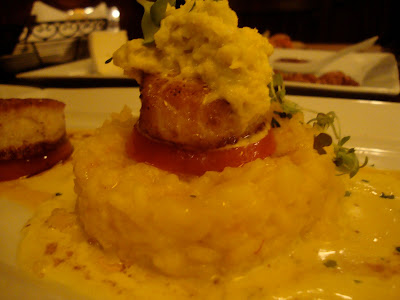 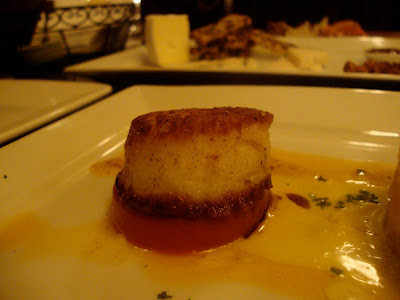 Elizabeth loves scallops so she ordered those. I'm not a huge fan but I was feeling adventurous so I tried two bites. All three scallops were served on a roma tomato; the middle one on the plate had the addition of blue crab and saffron risotto. I liked them and I'm glad I tried them, but it's not something I would ever order myself. 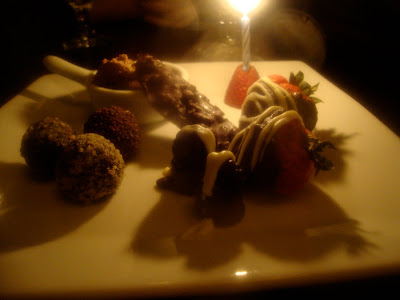 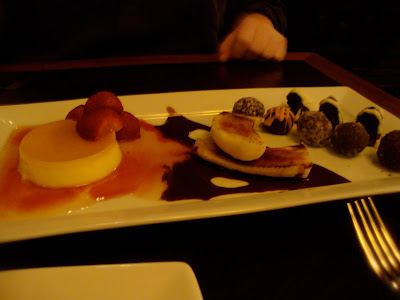 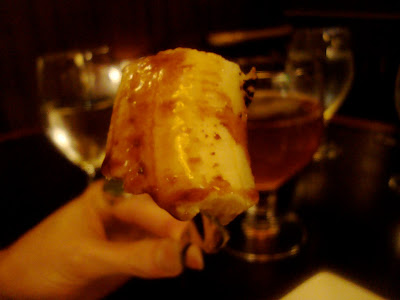 Partly because it was my birthday - but also partly, I suspect, because our waitress dropped an entire glass of beer on me, soaking my clothes - we were given not one but two plates of dessert. The first plate had blackberries, strawberries, truffles, chocolates and pot au creme. In other words, nothing I like. But the ladies liked all of it.

The second plate, though, was right up my alley: creme caramel with raspberry sauce, which was outstanding, and bananas in a chocolate sauce that, for the first time in my life, I actually liked.

Perhaps I ate and drank a bit too much, but it was the best birthday I have had in several years.
Posted by JustinM at 9:33 AM

I can't believe you had chocolate - twice!! - and a fruity shot all in one weekend. Birthdays are miraculous.

Everything was very tasty. And while we did get a little beer soaked, what's a birthday without that?

Happy birthday, lovely. I'm glad you had a weekend full of food and fun!

Super Large: I only had the chocolate at dinner. The dessert at lunch was white chocolate, which doesn't count. Even if it was my nickname when I played basketball in high school, a fact that Elizabeth finds disturbingly funny.

Liz: Yeah, you might have gotten even more beer on you than I did. At least it was the end of the evening. I just felt bad for the server, who seemed a lot more upset than either of us.

Rachel: Thanks. At dinner when it was mentioned it was my birthday, I said I was 19. The server just laughed. You know you're old when the server doesn't ask to see your ID when you tell them you're 19. It's a far cry from the time you carded me when I was 23.

pp- i thought u were going to hutch's?

Well, after the sandwich (and a couple bites of my lady's hamburger) at lunch, I decided I wasn't in a burger mood. Plus, Hutch's closes at 9 and I didn't get around to dinner until after 10.