A rundown of things I ate over my holiday weekend. 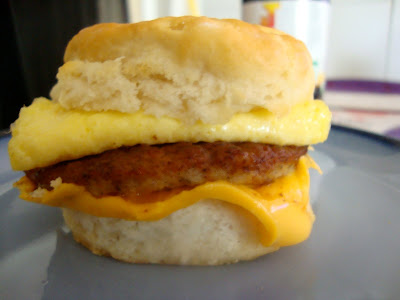 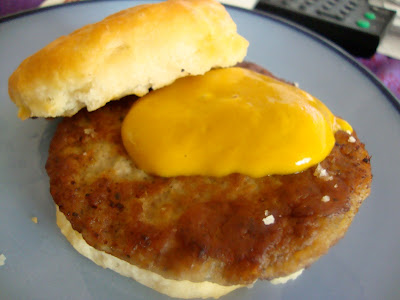 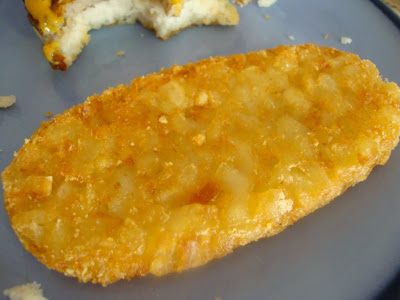 Elizabeth had asked if I would make her pancakes on Friday morning to celebrate her four-day weekend. I said sure. Then Friday morning came and we were watching TV and I said "You know what sounds good? A sausage biscuit." Elizbeth's eyes lit up like I had told her there was a Scrubs marathon about to start. So I got in the car and traveled the four blocks to McDonald's to get breakfast. (Oh well, at least I didn't have to make pancakes.) She had a sausage, egg and cheese biscuit; I had a sausage biscuit with some hot mustard sauce (as I mentioned not long ago, I love that stuff) and we both ate hash browns. 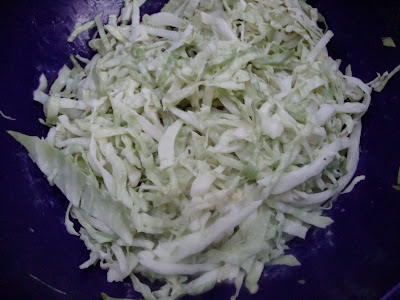 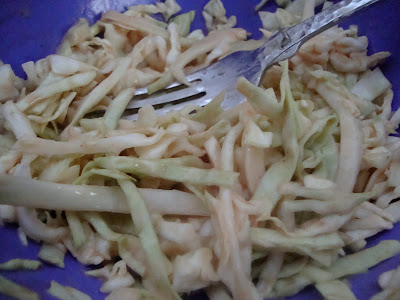 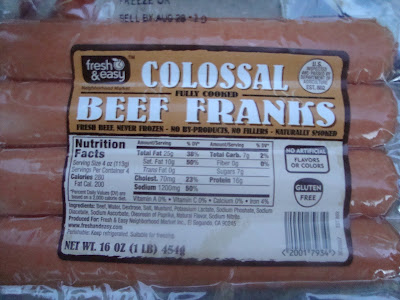 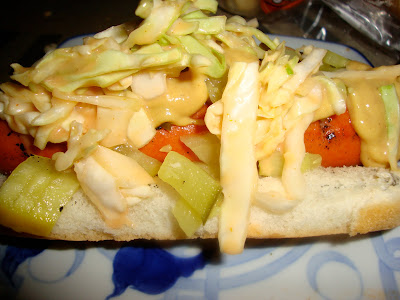 Friday evening, our friend and neighbor Tracie joined us for dinner on our patio. I made two kinds of cole slaw: a traditional, mayo-based slaw and a spicy, Southern-style slaw with vinegar and mustard. I had a package of hot dogs from Fresh & Easy that I'd assumed came eight to a package. When I took it out of the fridge I realized it was only four. But they were big.

"I've got good news and bad news," I told the ladies. "The bad news is there are only four hot dogs. The good news is it's a big weiner I'm about to give you."

And the dogs were delicious. I offered to cut the fourth hot dog into thirds so we could all share it, but I was told not to.

"Your weiner has satisfied me," Elizabeth said.

"This is the best, meatiest weiner I have had in a long time," Tracie said.

Yes, we are all in our 30s and still make these jokes. 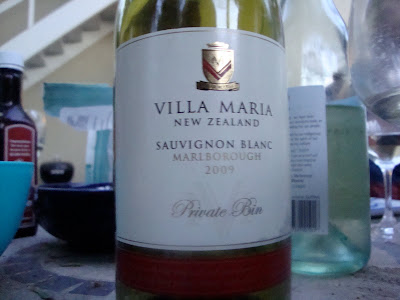 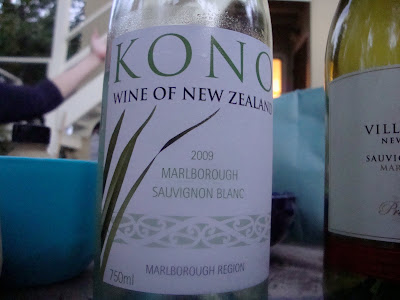 We had a couple of average white wines with dinner. 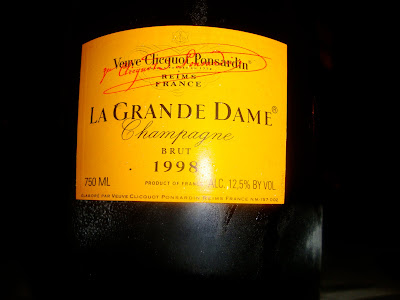 But then we had a bottle of champagne that our friend Tim had given Tracie a few weeks ago: a 1998 Veuve Clicquot "La Grande Dame." It was simply spectacular. I admit I am a champagne novice - I have probably had it less than ten times in my life - but this was certainly the best I have ever had. 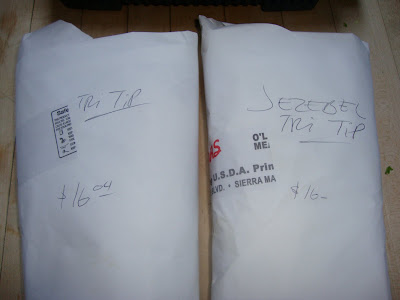 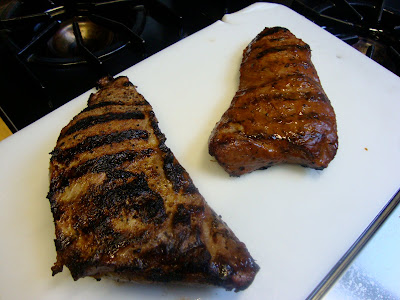 Some friends of mine throw a 4th of July party every year, although sometimes it's on the 3rd, as it was this year. The party is only five blocks from my parents' house, so Elizabeth and I decided to spend Saturday night at my parents' so we could hang out at the party (and drink as much beer as we wanted) without worrying about driving. Before going to the party we got tri tips from Taylor's Ol' Fashioned Meats: a plain tri tip, which I rubbed with some olive oil and Santa Maria seasoning, and an already-marinated cut in a "Spicy Jezebel" barbecue sauce. I grilled both of them. 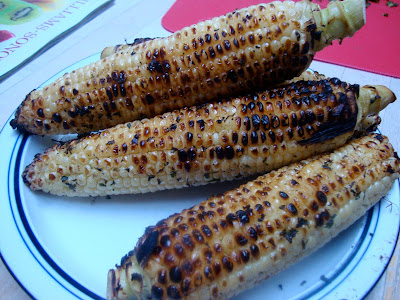 Q: Is there anything better than sweet corn, rubbed with butter and cilantro and grilled? 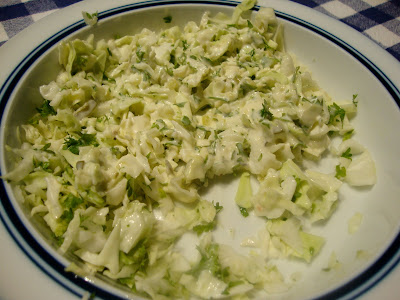 My mom has been obsessed for years with making a clone of the Crab Cooker's cole slaw. This is definitely the closest she has ever come. The secret, apparently, is adding a touch of their tartar sauce to the dressing. She apologized for using too much parsley in the slaw, but I love parsley, so I didn't care. 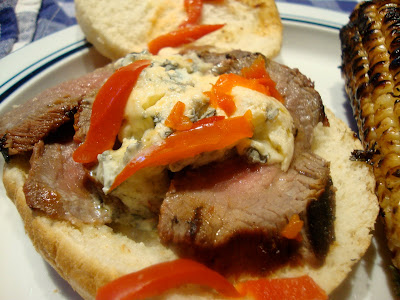 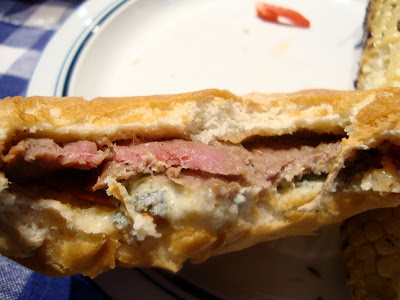 I put some of the sliced, spicy barbecue tri tip in a hamburger bun with blue cheese and spicy red peppers, wrapped it in foil, and baked it in the oven for ten minutes. It was one of the best sandwiches I have had all year. 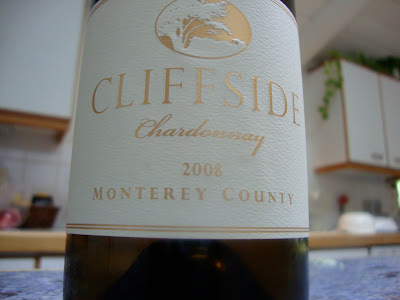 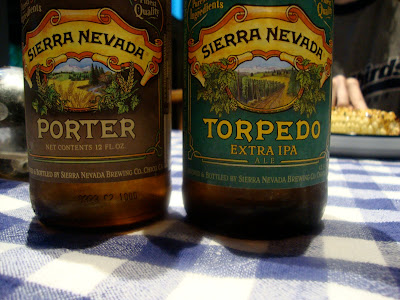 My parents were having some of the white wine and I took a taste. It wasn't for me. So I drank some Sierra Nevada beers. Those are definitely for me. 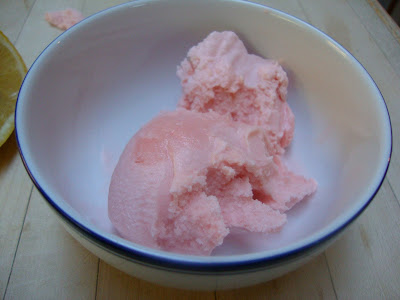 My mom made an attempt at peppermint ice cream. My dad was the first one to taste it.

"This tastes like Pepto-Bismol," he declared. And he was right. 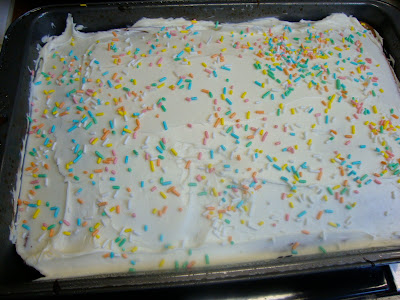 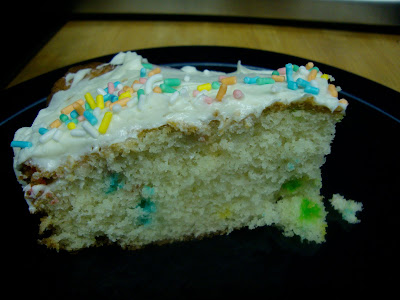 So I made a Funfetti cake. It was delicious. 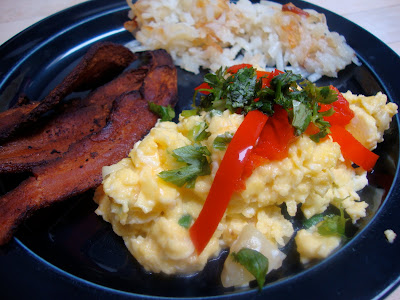 Sunday morning I made breakfast for everyone. This is my plate: thick Amish bacon, scrambled eggs with cheddar cheese, green onion, cilantro and spicy peppers, and the worst hash browns I have ever tasted. They were from a bag I'd seen on sale at Albertson's. Nobody tried them except me. They were the worst thing I have cooked in a long time. But the bacon and eggs were great. 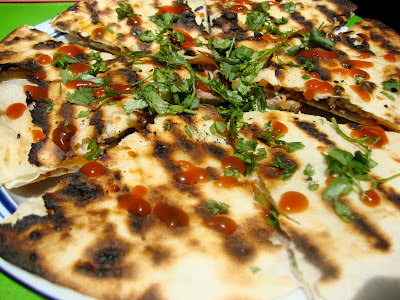 In the afternoon we were watching TV, just relaxing and moving at that slow, holiday-weekend pace that sometimes comes over you. My dad was hungry so I chopped up some of the leftover tri tip from the night before and put it in a tortilla with cheese and onion. I grilled it for a couple minutes on each side and topped it with cilantro and Taco Lita hot sauce. 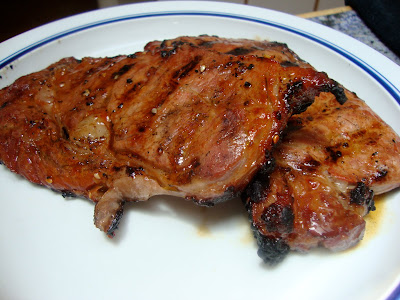 My brother and two of his friends stopped by my parents' house to hang out for a while. They had gone by Whole Foods and purchased two garlic-teriyaki steaks. My brother grilled them and gave me a taste. It wasn't terrible, but it was too fatty and salty for my taste. I've never been a big fan of Whole Foods meats, and this was no exception. (And when contrasting the steaks with Taylor's meats, which are fantastic, Whole Foods seems even worse.) 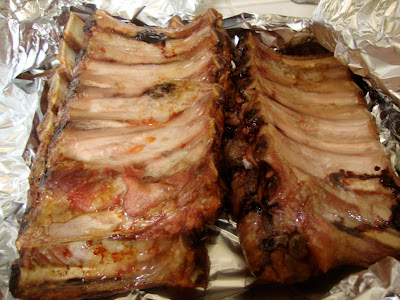 I also cooked some ribs from Taylor's for my parents. I baked them in the oven for a couple hours over a large pan full of beer. The next step is finishing them on the grill for ten minutes to get them charred, but my parents weren't going to eat them until hours later, so I neglected to do this step. I took a bite, though - they were still good. 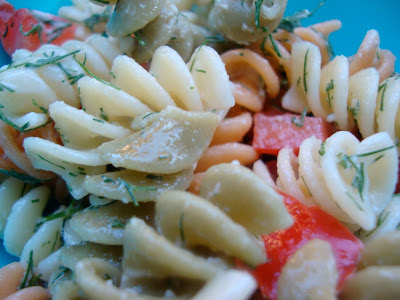 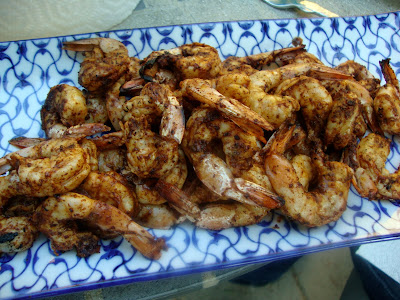 Sunday evening, we made dinner for ourselves and our friends Carla and Anne. Elizabeth made a pasta salad with red pepper and dill. This was great and, even though there was a lot of it, we almost finished the bowl. I marinated some shrimp with olive oil, chili pepper, garlic and lime, then grilled them. They weren't great but they were simple and tasty and perfect for the occasion. We ate them with cold Pacifico and then walked two hundred feet down the street to get a great view of the Rose Bowl fireworks. 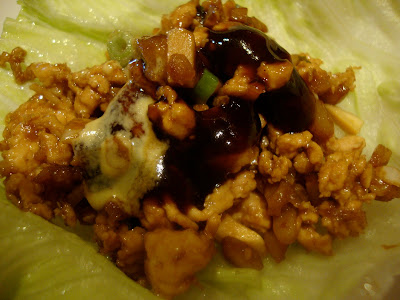 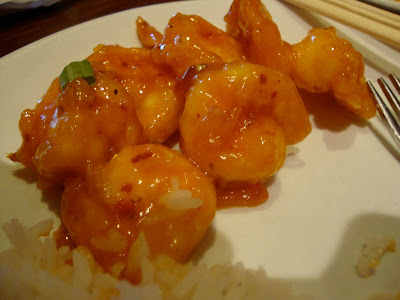 Monday afternoon was the only meal of the weekend that was a disappointment. But it was the biggest restaurant disappointment I have had in years. We went to Panda Inn - a restaurant I used to eat at a lot but hardly ever visit anymore, having eschewed it for Yang Chow whenever I am in that part of Pasadena. We planned to order one of their weekday lunch specials.

"We don't do those on Mondays of holiday weekends," the waiter told us.

(I know that's their right, but I found that disappointing. Golden China does their lunch specials every single day, and I have been there many times on holidays.)

We started with the "minced chicken with lettuce cups." This was a joke. There was maybe an ounce of chicken in the whole dish. The rest of it was comprised of walnuts and sliced almonds. It probably cost them a quarter to prepare. For our entree we had the "sweet and aromatic shrimp." A decade ago I loved a dish at Panda Inn called "sweet and pungent shrimp" and I was hoping this would be the same dish. It was not. It was a pile of salty, not-very-fresh shrimp in a basic sweet & sour sauce.

I have never even had a meal at P.F. Chang's as lousy as this meal was. I used to think Panda Inn was the "fine dining" version of Panda Express, but I honestly see no difference between the two at this point. (Actually, that's not accurate, I do see one difference: we could have eaten twice at Panda Express for the price of this one lunch at Panda Inn.)

For dinner Monday night we just ate leftovers out of the fridge. We had no desire or energy to do anything fancy.
Posted by JustinM at 9:06 AM

Awesome, thanks for the gastronomic tour.

I totally agree about Panda Inn. It's the same as Panda Express. Not as bad as PF Changs though.

I don't really know what was my favorite part of the weekend. It was all so good! A weekend filled with food followed by a Monday off, not many things better than that.

damn PP, u were off the chain this weekend! love the pics and the stories/ editorial that come with it.

Well it was 4th of July weekend! I had to celebrate our independence from... well... Hmm.

I would be honored to learn your mother's recipe for the Crab Cooker's coleslaw. I've moved to the midwest and used to eat at the Crab Cooker religiously when we used to live out there. Along with the coleslaw, I've been trying to make their Romano Potatoes. Thanks!