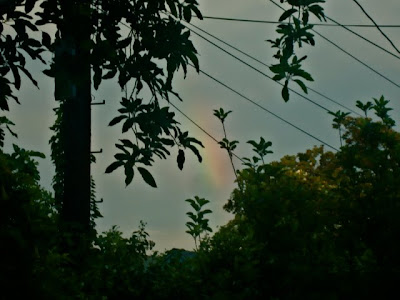 I went swimming once in a pool in the woods in Pennsylvania. It was a pool only by the loosest of definitions; it was a basically a giant hole covered with cement. I was told it was more than 100 years old. The pool was ringed with trees. It was late July. My friend and I swam for an hour and the air got increasingly humid, that thick, sticky, East Coast summer air. Finally it began to rain. It rained hard. We stayed in the pool as long as we could, leaving only when the lightning started. Even then we debated staying. It was one of the ten most beautiful things I have ever seen.

"I love California," my friend said, "but we don't get moments like this." 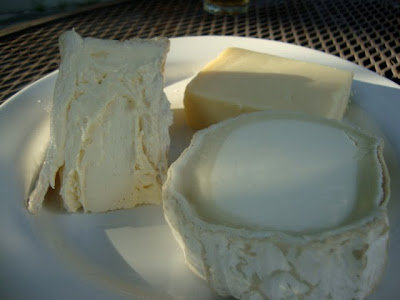 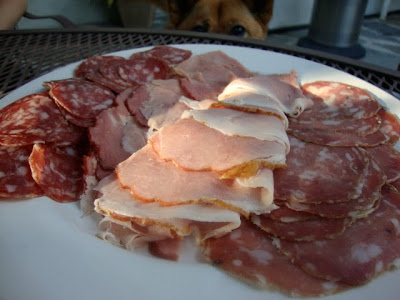 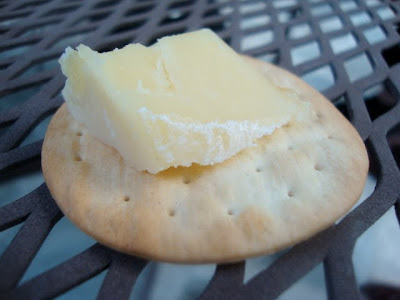 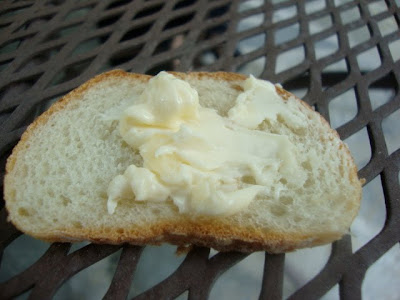 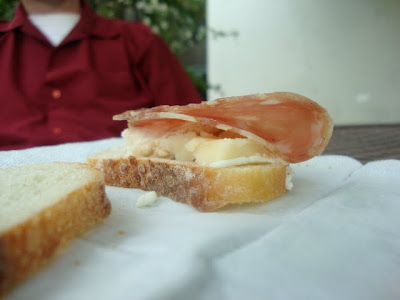 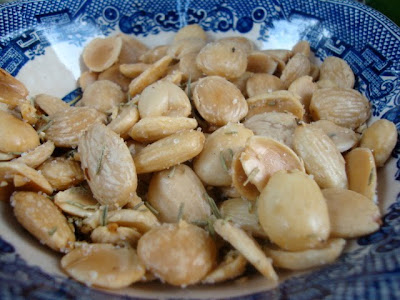 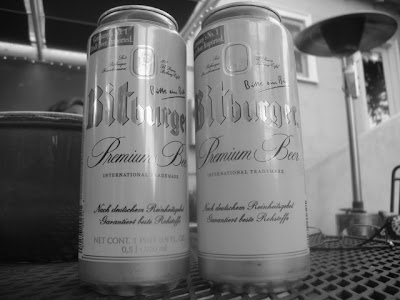 My friend Tim invited some people over for dinner last week; I joined my friends Murph, Tracie and Carla in having a seat around the table in his backyard on the most humid day I can remember in the last few years. We started, as we usually do, with a plate of cheeses: Ford Farm Seaside Cheddar, Seure Belle Boucheron (a goat cheese), and Delice de Bourgogne, a triple cream as gooey as any I can remember.

There was a plate of charcuterie as well: rosemary ham, Toscana salami, and Salmetto salami. I knew there would be several wines later in the evening, but we all needed a cold beer to quench the thirst. We drank cans of Bitburger. 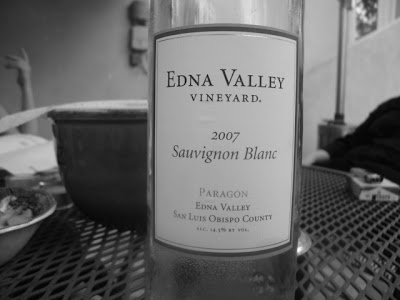 The first wine was a Sauvignon blanc from Edna Valley Vineyard. (A year ago I had a picture at the top of this blog of a few bottles of wine in front of windows looking out across a vineyard. That was a picture I took at Edna Valley a couple years ago.) I have never been a fan of Sauvignon so I only had a small glass of this, but I admit it was one of the better ones I have had in a long time. 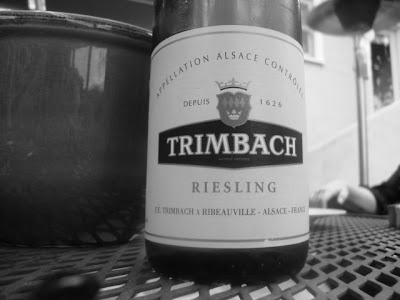 I know I have had Riesling before, but I had no memory of its taste. Tim brought out a nice one: Trimbach. It was crisp but not as dry as I'd expected. I don't know if I would drink this under most circumstances, but considering the heat and humidity of the afternoon, it was a nice treat. 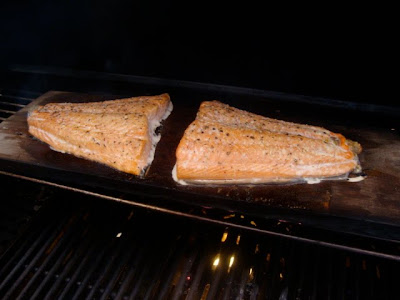 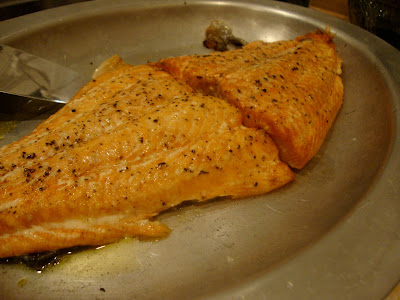 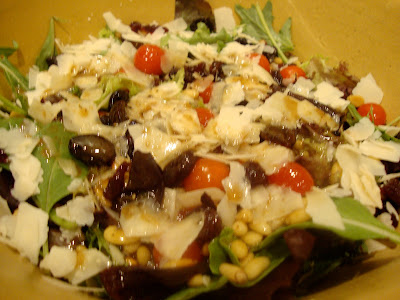 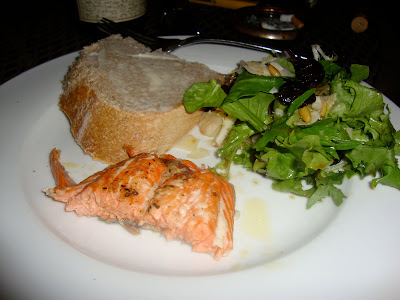 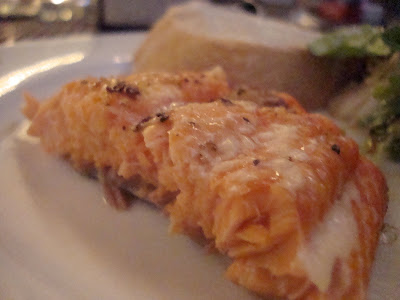 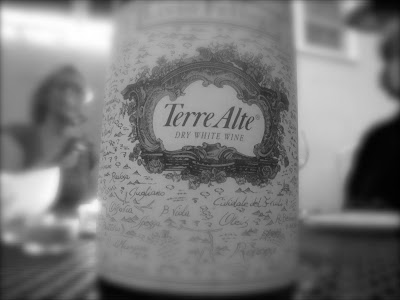 Tim cooked salmon the best way possible: on a plank on the grill, which perfumed the heavy, humid air. The fish was fantastic. Murph had never tried salmon before, never had any desire to, but he was willing to try this. He had three helpings. I warned him not to order it in a restaurant expecting it to be this good.

"Don't worry," he said, "this was the only time I will ever eat salmon in my life."

We paired the salmon with a Livio Felluga Terra Alte, a blended Italian white wine with a whiff of pine and hint of citrus. Perhaps I need to rethink how I feel about white wines. This was very good. 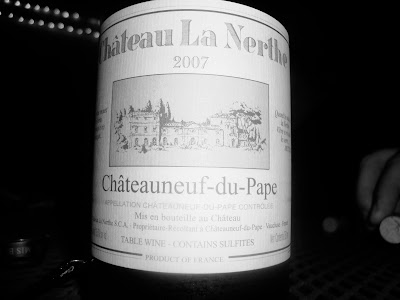 Next we had a Chateau La Nerthe "Chateauneuf-du-Pape," also fantastic. 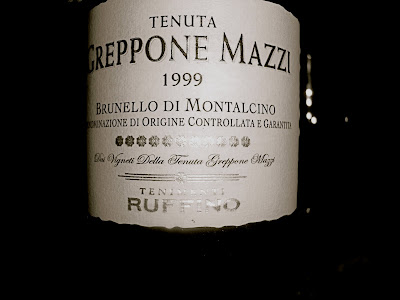 Tracie made a comment about Brunellos, so Tim decided that sounded good and went down to his cellar and brought up two bottles of Brunello di Montalcino. The first was spectacular, one of the best Brunellos I have ever had. The second (from the same vintage) was not quite as good, and a little off at first sip, but eventually smoothed out.

It was an outstanding dinner with amazing libations. Sure enough, before the evening was over a rainbow came out, the sky grew dark, and it started to rain, a warm summer drizzle like I have not felt in Southern California in years. The ladies danced in the rain.
Posted by JustinM at 9:01 AM