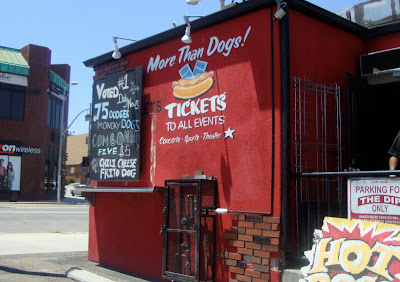 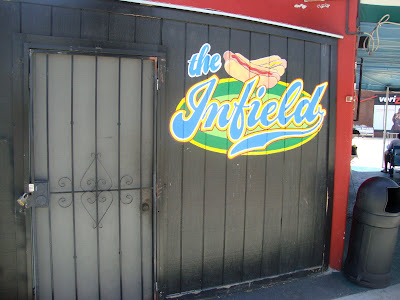 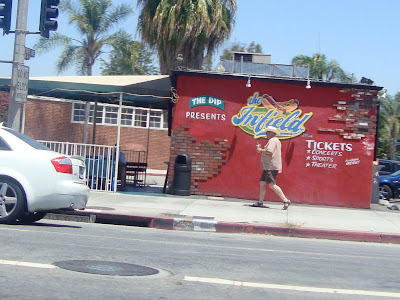 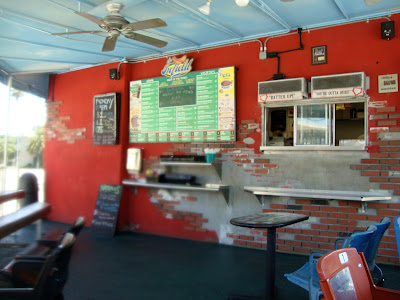 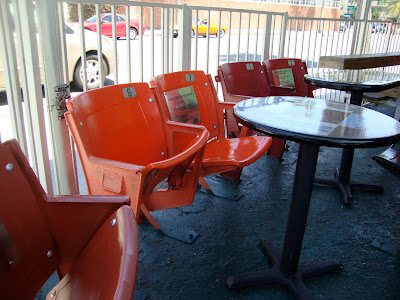 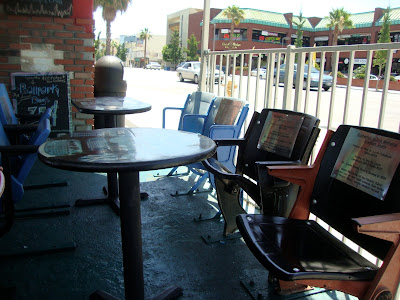 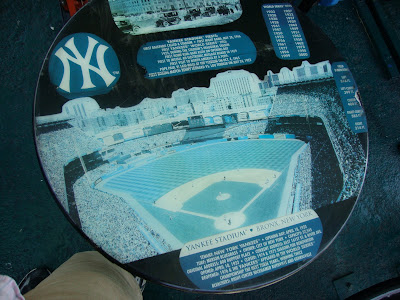 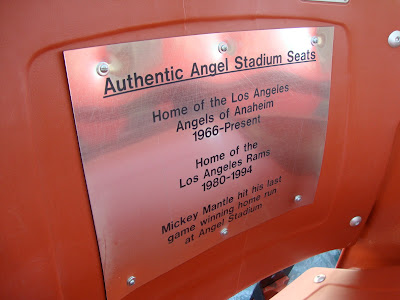 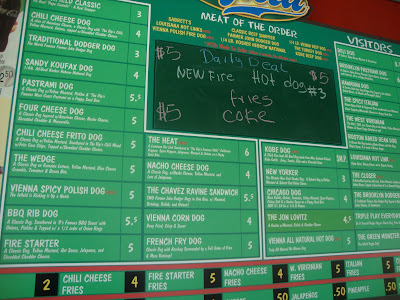 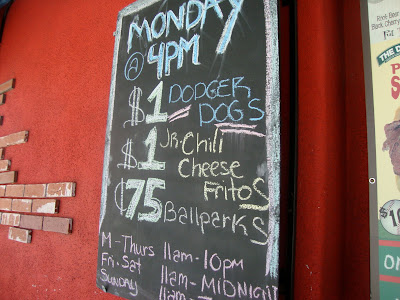 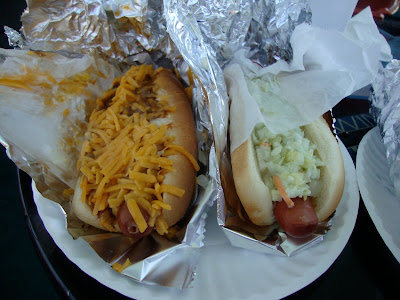 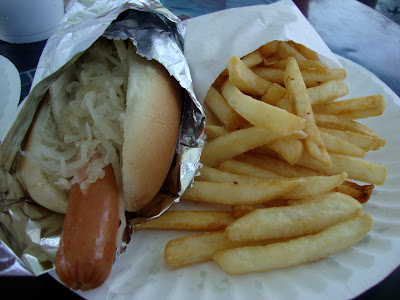 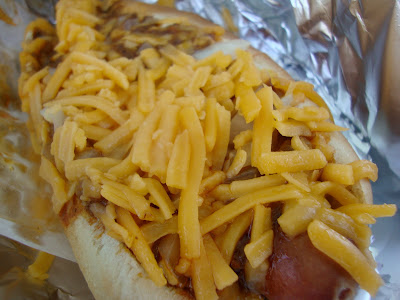 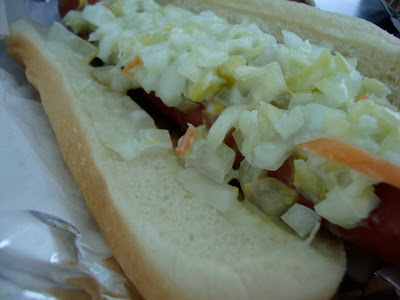 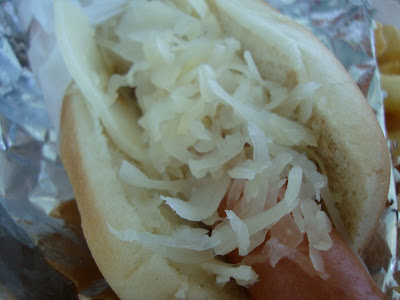 There are only a small handful of things that I have loved as long as I can remember. Hot dogs and baseball are two of them. I remember my first baseball game: Angels vs. Orioles, 1986, with my dad and brother. I do not remember my first hot dog. (The only dog from my early years that I remember well was a corn dog at the old May Co. where my tooth came out. I refused to eat another corn dog for years.)

So a couple years ago, when I first heard rumor of the Infield - a baseball-themed hot dog stand - coming to Sherman Oaks, I was excited. My friend Hatcher (my partner in my original extravagant food adventure, the Memphis in May World Championship Barbecue Cooking Contest) and I made plans to check it out on opening day. I picked him up and we headed over to Ventura Blvd only to find a homemade sign postponing the opening. We ate at Fatburger, which was good, but "not anything we really needed to make a special trip for," as he put it.

Then I mostly lived vicariously through other reviews of the Infield. The setup of the place certainly looked cool, but the food didn't look like anything special. The "Twinkie Dog" - a hot dog with fried Twinkies as buns, powdered sugar and Cheez Wiz - just seemed ridiculous. The enthusiasm of driving out to the Valley - one of my least favorite places on Earth - to eat at the Infield slowly faded away.

The other day Elizabeth and I found ourselves out that way, hungry for lunch. It was a hot summer day and the Angels game was on the radio and hot dogs sounded tasty. I suggested we try the Infield.

The patio of the hot dog stand is scattered with tables featuring pictures of MLB stadiums and several actual stadium seats, from places like Angel Stadium, Dodger Stadium, Busch Stadium in St. Louis, and Tiger Stadium in Detroit. Obviously, the table with the Yankee Stadium picture made Elizabeth happy and she wanted to sit at that one. I refused.

There are more than 30 hot dogs on the menu. It took me a couple minutes to decide. Elizabeth wanted a chili cheese dog. I felt like something a little more complicated. I ordered a "West Virginian," with chili, mustard, onions and cole slaw, and a "Brooklyn Dodger," with Swiss cheese, spicy mustard and sauerkraut.

The wait was only a few minutes. The guy working behind the window was very friendly and gladly offered me a refill on my Diet Coke while I was waiting. All three of the dogs were good, but, as usual, Elizabeth made the best call: the chili cheese dog was my favorite. It was the only of the three dogs on which I felt the toppings were adequate. The chili was delicious. The West Virginian was very good, I really liked the cole slaw, but there was hardly any chili on it. The Brooklyn Dodger could have used more of all three toppings.

The fries were the exact fries you would expect at a place like this, but they were cooked long enough to be crispy, which makes them better than average.

Overall, I liked the Infield, but I doubt I will ever go there again. The price for two drinks, three dogs and one order of fries was eighteen bucks and change, which is a pretty nice deal for lunch for two. (The Slaw Dogs would almost certainly cost twice that much.) But, although I liked the quality of most of the toppings, there just weren't enough of them. The wieners themselves were average. The Infield is a cute novelty and if you're a baseball fan, you should definitely check it out. But if it's just quality hot dogs you're after, I can think of quite a few places you'd be better off going.
Posted by JustinM at 10:49 AM

That's disappointing. It looks like it could be a really cool place.

"Obviously, the table with the Yankee Stadium picture made Eliaabeth happy and she wanted to sit at that one. I refused."

It is a cool place, especially if you love baseball. But the food is not anything you can't do at home if you have basic hot dogs and $5 worth of condiments in your fridge.

Where would you go for better hot dogs?

I like Carney's if I'm in that area. If I'm in Pasadena, I check out the special at Slaw Dogs, or get a dog from The Hat or Jake's.

Well, i won't be bringing any of my dates there. no girl I know wants to settle for an average wiener.

Nobody ever really outgrows wiener jokes.

Hi, This is Robert Davitian, Owner of The Infield. First I wanted thank you because you actually took the time to visit and you also said some really nice things.

I am taking in what you said about the lack of condiments. That's totally my fault. I was always so worried that the Chili in the West Virginian overpowered the dog. I will have to reconsider then amount for sure. As far as the Brooklyn Dodger I will take a look at the amount of toppings. I have some concerns with the tartness of the kraut. However I think that dog may be due for an extra slice of Swiss cheese.

As far as the dog quality, I myself am not a huge fan of Dodger Dogs, they are more for nostalgia I think. However we have some other robust meats that might knock your socks off.

If I made some changes would you be willing to come back and give us another shot. My Treat!

Let me know...and for anyone reading this email me for a free dog. rdavitian@gmail.com

Hello, Robert. I would certainly be willing to come back and give it another try, even without the comp. (Be careful offering free dogs to my readers, they be a motley crew.)

As I wrote, I do like the Infield. A great setup and a very good group of employees you have. I just don't like the Valley. If you were in Pasadena I would visit more frequently.

Your prices are very reasonable. There aren't many places these days where two people can have an enjoyable lunch for $19. But the opinion I formed from the dogs is that the toppings are used to grab your attention and sell the dogs, but then simply spooned on as an afterthought.

I am speaking only for myself (but then again this is my blog, so who else would I be speaking for?), but when I order a hot dog with chili, or kraut, or mustard, or bacon, or whatever have you, I want to taste a lot of that. These aren't filet mignons we're talking about; these are hot dogs. The toppings are every bit as important as the wieners, especially when there are 30+ different kinds.

At any rate, since you took the time to write, I will be glad to make a return visit.

If there's free wiener involved, I'd love to tag along.

I'm running a summer camp for a couple of weeks. It would be great if I could bring the kids(35 total) along for some free grub and baseball fun! Let me know when.

This is the place that JGold rounded up for his Chicago dog piece? Sure looks novel! But $18 for dog lunch for 2 borders inane, which makes Slaw Dogs absolutely off limits for my food budget. Seriously, it's hot dogs, not Voltaggio.

Yes, I'm pretty sure he mentioned the Twinkie Dog in that piece, although in my memory his son ate it. (I may be wrong, though, maybe it WAS him.)

I guess I'm way too conditioned to Slaw Dogs prices; I thought $18 for two at the Infield was very reasonable. There has only been one time I have ever gotten out of Slaw Dogs paying less than $20, and that was because the two of us were only having a snack (and the bill was still $19.75).

Mr. Anonymous, I would love to help out. email me at rdavitian@gmail.com. I would be happy to have the kids come buy for some free dogs!

I miss baseball. It looks like a cool little stand for late night eats.