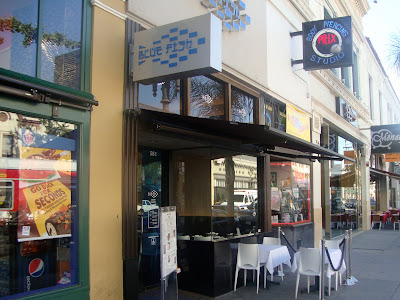 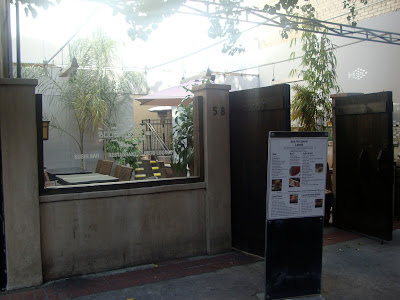 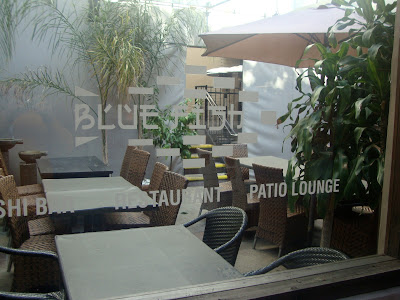 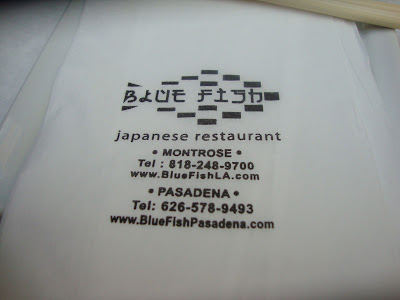 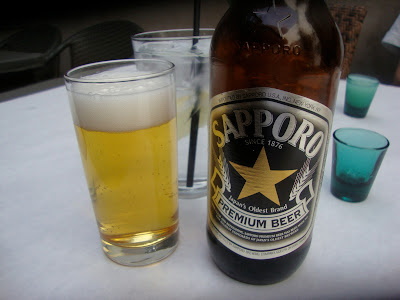 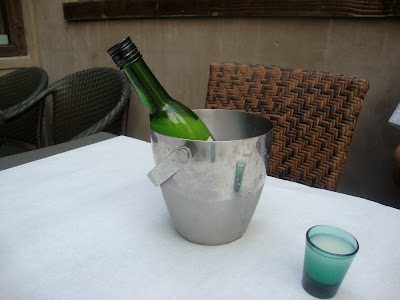 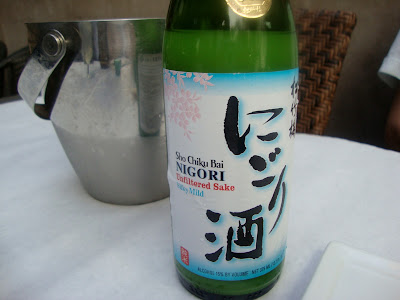 When I was a teenager this was a place called The Rack Shack, an unremarkable but tasty barbecue joint serving decent barbecue sandwiches, mediocre fries drenched with hot sauce, and cheap pitchers of beer. Nobody ever asked for ID. By the time I was 21, The Rack Shack was a frequent stop for me: an appetizer, two sandwiches and a pitcher of beer cost less than twenty bucks.

Then it became Ari-Ya, a sushi restaurant beloved by a friend of mine who worked nearby. I would often meet her at the sushi bar, where she ate dinner and I drank beer. One night there was something on the plate called a "fire roll," drenched in a sauce that I instantly recognized as sriracha. I took a bite. It was amazing, a sweat-inducing burst of flavors both new and familiar. I was in love with sushi.

(A few weeks later my mom saw me eating sushi and asked what I was doing. I said "Oh, yeah... I love sushi now." She just shook her head and said "I wish your grandmother were alive to see this.")

After a few years Ari-Ya closed. The ending saddened everyone but surprised no one. The service was the worst in Pasadena. One of my final nights eating there, my brother and I waited more than an hour for our food. Finally I asked where it was.

"Oh, was that yours?" a particularly air-headed waitress responded. "We couldn't remember who ordered it so we threw it away."

I took the bottle of soy sauce off the table and said "I am keeping this because you wasted my time." I do not know why that made me feel better but it did. My brother and I ducked next door to Lucky Baldwin's and had fish & chips. I kept the soy sauce on the table next to my food. ("When did we start putting soy sauce on the tables?" a confused waitress asked.)

Ari-Ya gave way to Tani, a restaurant which, without exaggeration, took months of constant construction to open. This became even more amusing on my first visit to the new restaurant: it looked almost exactly the same as the old. Tani's prices were much higher but there was no denying that their food was great. Elizabeth and I ate there on our first anniversary of being a couple. My friend Tracie bought me dinner there on my 30th birthday. Even my parents loved the place, and my dad is someone who literally just said to me the other day "I don't really like any restaurant food."

But, in what you've probably noticed is a constant pattern for this location, Tani closed, too. In came Blue Fish, a similar restaurant with a location in Montrose that I had heard about for years but never visited. I decided I would get around to eating at this new Old Town location one day, but was not in any hurry.

More than a month ago I gave my friend Murph a ride to the airport one morning, and he insisted he take me to lunch for the ride. We had talked about going to Green Street Tavern, and indeed I met him at his house the other morning with the intention of going there, but it was a very nice day out and I suggested we try Blue Fish. (I knew he loved the place.)

We took seats on the back patio - we were the only people sitting there - and ordered some drinks. It was a Friday and we both had the afternoon off. I ordered a Sapporo and Murph ordered a Nigori saki. 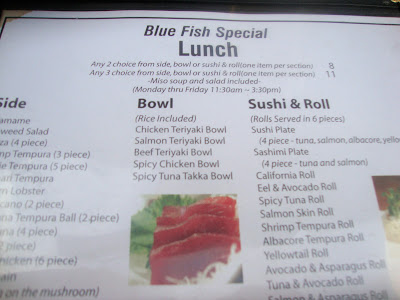 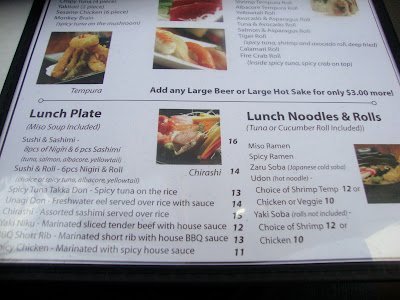 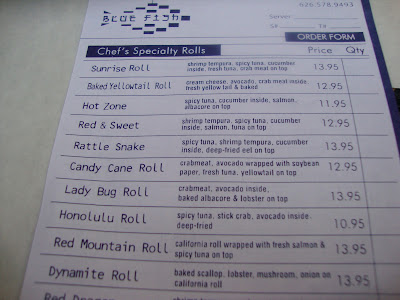 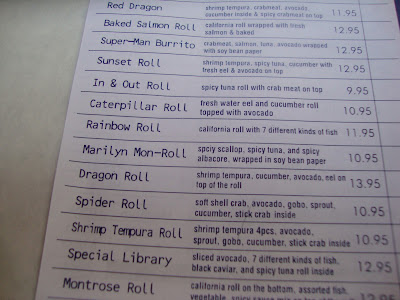 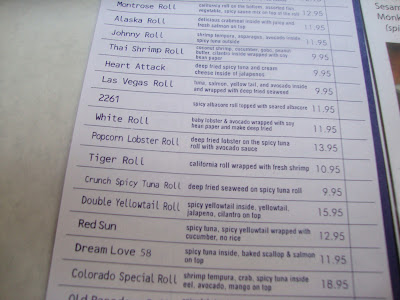 Like Tani before it, Blue Fish is not an inexpensive restaurant, however they have an outstanding lunch special. For 8 dollars you can choose two items - or 11 dollars for three items - from a list separated into three categories: side, bowl, and sushi & roll. (The only stipulation is that you can only choose one item from each category; I would certainly have preferred two of the "sides.") I opted for the two-item lunch: popcorn lobster and a spicy tuna roll. All lunches are accompanied by soup and a salad. 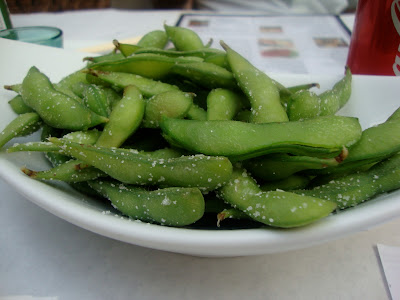 The ubiquitous edamame, a dish I've never much cared for. I don't hate them, I just think they taste like cardboard. Okay, maybe I do hate them. 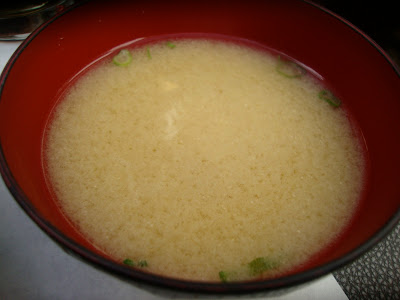 Tani had the best miso soup I have ever had. Blue Fish's soup is pretty damn good, though. 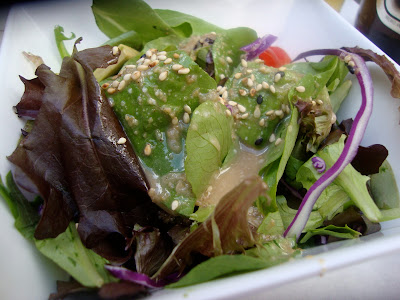 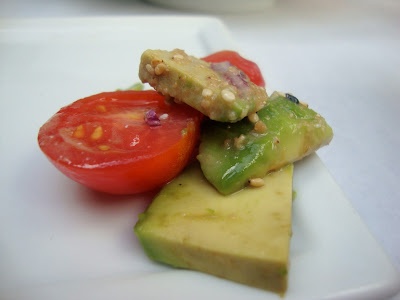 The salad was excellent, if a little heavy on the dressing (there was a pool of it gathered at the bottom). I picked off the tomatoes and avocados. I may love sushi now, but I don't see a time when I will ever like those two things. 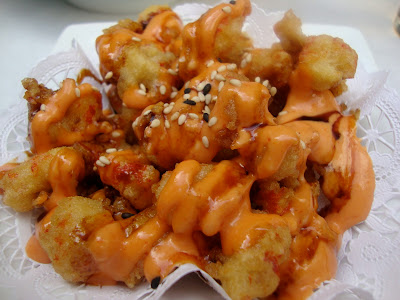 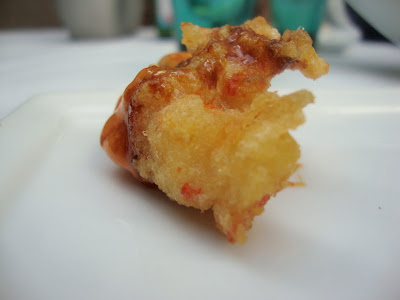 The popcorn lobster was outstanding, one of the best things I have eaten in quite a while. On the dinner menu this goes for $13, and I would have no problem paying that. As one-half of an $8 lunch special, it is a phenomenal deal. 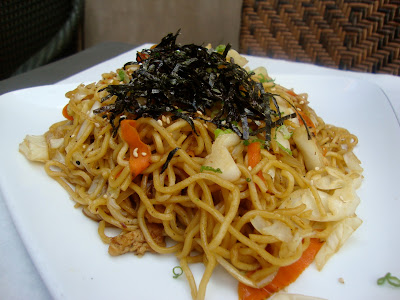 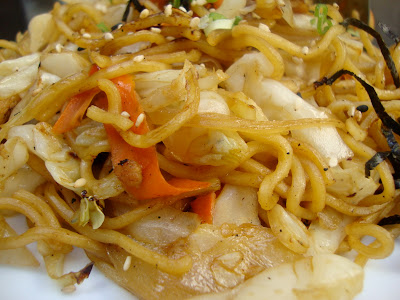 Murph ordered the chicken yakisoba, a dish of fried noodles, vegetables, and chicken. I did not try any, despite his repeated offers, but he loved it. 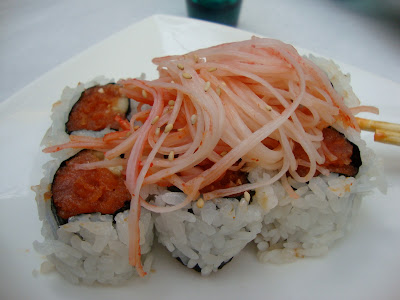 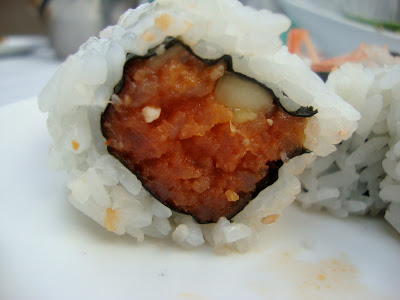 My spicy tuna roll was good, not great. I love a spicy tuna roll full of flavor and actual spiciness. This had the former but not the latter. It was still well worth making up the other half of the lunch menu. 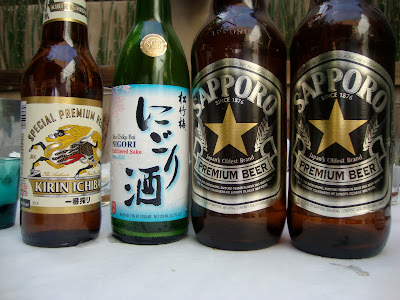 What the hell - it was Friday, right?

While I do not like Blue Fish as much as I liked Tani - I imagine there will be precious few Japanese places I will ever like as much as I did Tani, for a variety of reasons - I still thought it was very good, and the lunch special was a great bargain. I am sure I will return.
Posted by JustinM at 10:33 AM

Ooh, an "In & Out" roll! Oh, it's not ground beef and cheese with grilled onions?!?
The remaining connotations aren't quite as appetizing.
The lobster thingy looks really tasty, especially with some really good junmai ginjo sake!
I wish that I would have tried Tani, but have always been off-put by a location which only spawned businesses with 6 month life spans.

Never had lunch here, seems like a good deal, but had dinner. The sushi isnt good enough for those prices. Roku prices at discount sushi quality.

Nosh: Tani was fun, in my opinion a perfect balance between quick sushi and high-end stuff. And that miso soup... oh man.

Anon: I have not eaten dinner there, but I am not at all surprised to hear that. It's really quite a disparity: the $8 lunch combo was one of the best deals I have ever had in OT, but the "chef's specialty rolls" on the dinner menu are all priced between eleven and nineteen dollars. They would have to be a HELL of a lot better than my spicy tuna roll to justify those prices.

I have spicy tuna from Blue Fish for lunch at least twice a week, often three times, and have found that the spiciness of the spicy tuna varies depending on who the chef is that day.

Murph had to go deal with some things, so he left me before lunch was done - and with almost a full bottle of beer - so he didn't finish lunch. Otherwise there probably would have been mochi for that beautiful bastard.

Is it possible the Ari-Ya you refer to has reopened in West Hollywood? They have the same Fire Roll you describe and the service is pretty good.

Funnily enough, I drove through West Hollywood the other day for the first time in at least a year, and I noticed that restaurant. The logo is the same as the Pasadena restaurant was, so I'd say it's very possible. I'm too tired tonight to look up the ABC's license query, but maybe I'll do that tomorrow.

Okay, once I saw the Lakers won I got renewed energy. I looked at the ABC - the person listed as the owner for the WeHo location was also listed on the license for the Pasadena location, so I would say they are most certainly related. Good catch, man.

Cool. The Ari-Ya in WeHo is great. All the fish is really fresh and the rolls are really unique. They also have some great daily special rolls that are worth trying. Definitely worth checking out if you're in this area.