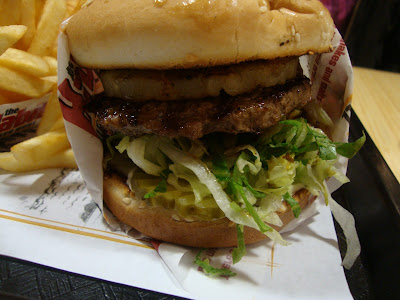 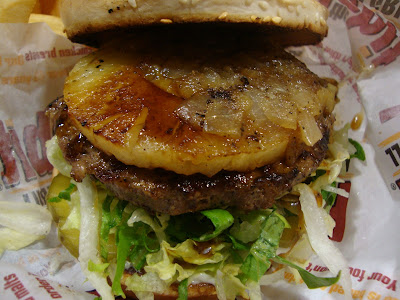 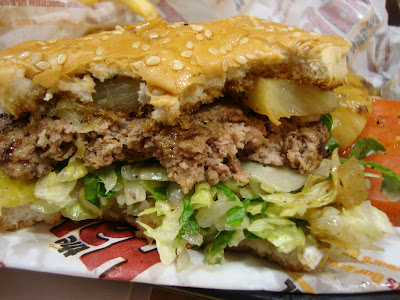 Elizabeth and I picked up her mom at the airport last night; she's in town on vacation. We'd come up with a plan the day before - do some shopping, get Popeyes Crawfish for dinner (Elizabeth hasn't tried them yet) and be at the airport in plenty of time.

It didn't quite work out as planned. Elizabeth had to stay at work an hour late. Her mom's flight, which I was following online, was scheduled to get in 45 minutes early. So we effectively found ourselves an hour and 45 minutes behind schedule. No worries, I said, we'll do the shopping later. And we headed down to Popeyes.

The last time I had been to this Popeyes at night, it was a madhouse. I described it a week ago: cars double parking, people wandering around. I had assumed it was people wanting to try the crawfish that had just come out that day. But last night it was even worse. There was a line out the door. I was lucky enough to grab a parking spot - two different guys, not paying any attention to their driving, almost hit me - and we went to wait in line. After standing around for several minutes I said "let's just go somewhere else."

I got back to my car, and there was employee from the neighboring Pizza Hut standing against the wall having a smoke.

"Is this parking lot always this much of a zoo?" I asked.

"Only on Tuesday night," she replied. "Popeyes has 99 cent chicken."

Ah, I thought, remembering that the night we went last week was also a Tuesday. I will never make that mistake again.

So now we only had about an hour before the flight got in, and I suggested we just head straight to LAX to see how traffic was. If it was good, we could just grab something near the airport. Luckily it was smooth sailing and we made it down there in about 30 minutes. I headed down Sepulveda, hoping I wouldn't have to resort to eating at McDonald's, when I saw the neon sign of The Habit. I've only eaten there two or three times, but loved it each time. I pulled into the parking lot.

I wanted to try something different - and no way was I going to order the pastrami - and I don't know why my eye was drawn to the Teriyaki Charburger. Teriyaki is not one of my favorite flavors; it's always salty and sometimes it's also sweet, a flavor combination I loathe. But I ordered one anyway.

Five minutes later I had my burger, with grilled pineapple and caramelized onions. I took a picture then took a bite. It was very good. The teriyaki flavor was subtle, not bad at all. I only ate half the burger with the pineapple - I wasn't a big fan of it - but I scooped up all the stray pieces of onion and put them back in the burger. I wish I had ordered extra of the onion.

This burger, like every other one I have had from The Habit, had that charred taste from being grilled over an open flame. Some people I know hate that taste, but I love it. I don't think I will ever get the teriyaki version again, it'll be back to the regular char burger, but I'm glad I tried it once.

Now that we have a Fatburger in Pasadena, it would be nice to have The Habit, too.
Posted by JustinM at 1:04 PM

Hey friend. Sorry if I haven't blogged in awhile but I have been totally lazy - beachin' it up in Ventura. The Giants won, can you believe it? OMG!

Yep, I believe it. That starting pitching was amazing, and it didn't hurt that Vlad had one of those classic Vlad playoff series that us Angels fans know all too well.

My burger was delicious. I didn't think I was going to enjoy all the onions on there, but it was fantastic.

Drove past a Habit Burger today in DT Ventura... Thought of you guys!!