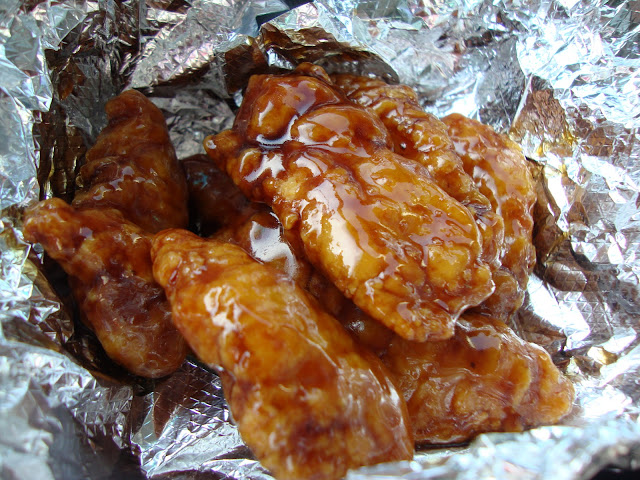 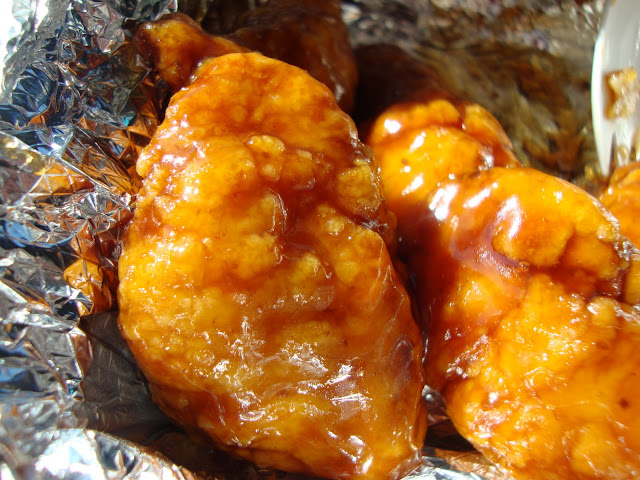 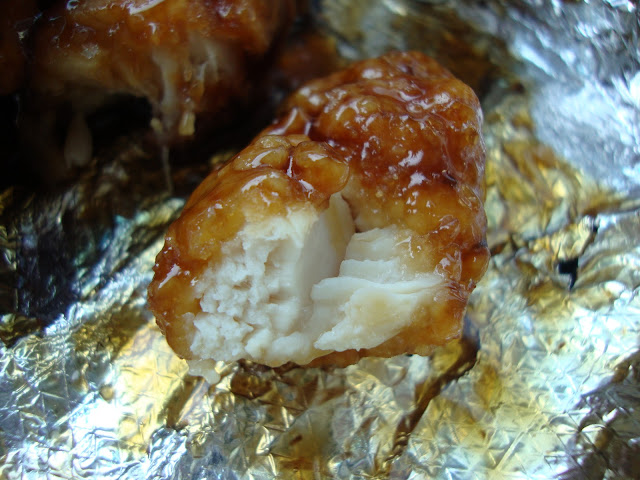 I've written of both Church's boneless wings and Carl's Jr.'s new hand-battered chicken tenders. The former are very good, as good as any restaurant's boneless wings and far better than Wendy's, Wing Street, Wingstop, or any other fast food chain (who advertise their wings for 50 cents each on certain days of the week, which is the same price Church's wings always are.) The latter were pretty good, better than most fast food chicken tenders.

A couple days ago I saw two new ads: Church's has replaced their "chili lime sauce" (which I thought was great but an employee confessed to me was the least popular of their flavors) with teriyaki, and Carl's Jr. has added a new dipping sauce: "Kickin' Asian Sweet & Spicy." (Presumably a tie-in with the upcoming Green Hornet movie - if it's not, the name and logo are confusing and more than a touch offensive.)

I decided I needed to try them both in the same afternoon.

First I went to Church's, entering the restaurant. Every person in line ahead of me ordered their food and received it on a tray to dine-in. Except me. I was handed my food in a to-go container in a plastic bag. I considered asking why I was given my food to-go (this was the one day of the month I showered, so I couldn't have smelled that bad) but then it occured to me I didn't care so I took my food and ate it in the car.

The boneless wings were great, the same crispy, meaty, high-quality chicken I have always received at Church's when I've ordered boneless wings. The sauce wasn't very good. It was extremely sweet. Teriyaki has never been one of my favorite flavors - it's usually too sweet, too salty, or both. This wasn't terrible, but it was certainly my least favorite of any of the sauces I have tried at Church's. The now-gone chili lime sauce was much better. 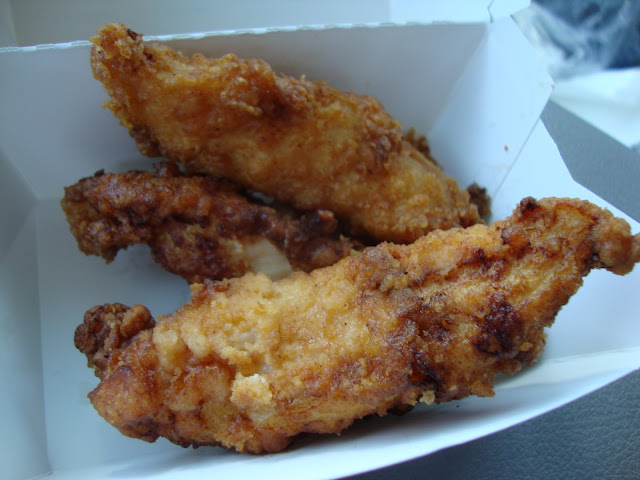 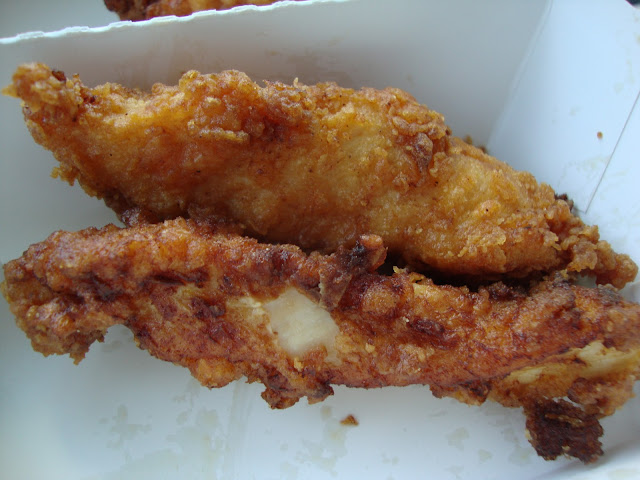 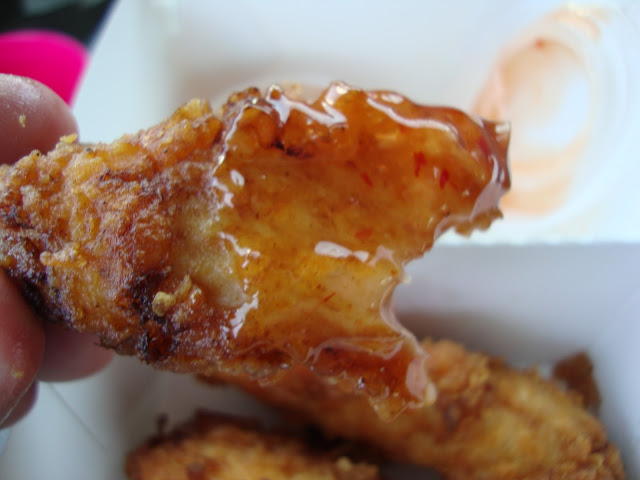 I then went to Carl's Jr. Oh boy. Where to begin? I sat in line in the drive-through for about five minutes while the woman in the car ahead of me kept saying "Hold on. One second. One second." Finally she said "Okay, I'm ready. Y'all still got the crawfish?"

"Yeah-huh," the customer answered back. "You alls had the crawfish, I just had it the other day."

"No ma'am, that's Popeyes. Right across the street."

The woman sat there for another two minutes before saying "Okay, nevermind," and driving off.

The girl on the speaker asked me how I was doing. "Fine thanks," I said, "I'd like the three-piece chicken tenders with sweet & spicy sauce."

"Okay, how many pieces do you want?"

"What kind of sauce would you like with that?"

After all that, taking several minutes to order my food, I was handed my order at the window in a ridiculous amount of time, perhaps ten seconds. I parked and opened the box. What a disappointment.

Last time the chicken pieces were large, too hot to handle, and crispy and juicy. They weren't great, but they were better than any fast food chicken tenders I could remember having. These sucked. They were shriveled, barely warm, and the breading was burnt in some places and missing in others. I still took a bite. Even worse, it was rubbery, dried-out chicken.

I dipped my second bite in the sauce. I don't know how the hell they can call it sweet and spicy. There was nothing spicy about it at all: it tasted like jam. (The previous time I had tried their "sweet & bold" barbecue sauce and it was exactly the same as their regular sauce. Carl's Jr. is not particularly honest about their sauces, although the fact that I care about such things might be somewhat pathetic.) I took the two remaining tenders and set the box on top of the the trash can in the parking lot. Hopefully somebody found them and wanted them. I sure didn't.

Church's chicken with the teriyaki sauce may not have been great, but it is the clear winner here. The chicken was at least tasty, whereas Carl's Jr.'s chicken was lousy and carelessly served.
Posted by JustinM at 9:56 AM