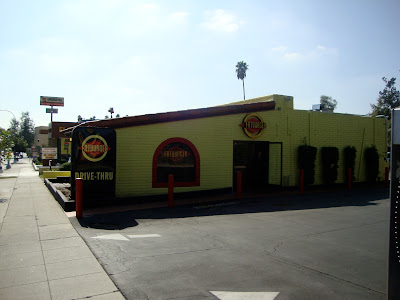 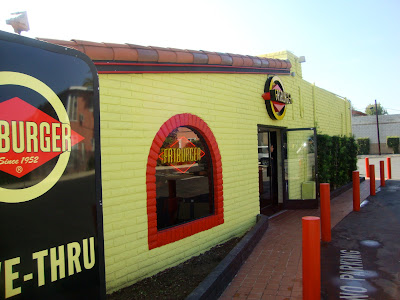 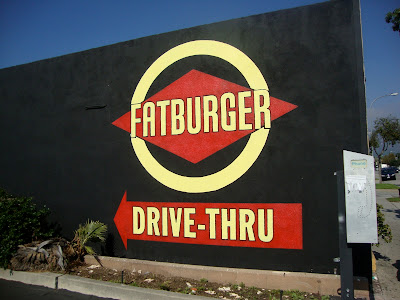 The first few blocks of Lake Avenue as it crosses over the 210 freeway and heads up towards the mountains are as densely packed with restaurants as any area I have ever seen. There are the fast food chains - I could stand in the middle of the street and hit McDonald's, Burger King, Carl's Jr and KFC with a thrown baseball. There are the local institutions like Roscoe's and The Hat and newcomers that seem destined for legend status like The Slaw Dogs. There are the hole-in-the-wall taco joints like Lake Taco, La Chona and El Taquito Mexicano, where you can still get lunch for two and change from a ten. There is the coffee shop where you used to be able to order mediocre omelets or world-class pho (though I've heard the Vietnamese chef left and it's back to just being a coffee shop). There is a even a seafood joint, the stink of which you can smell from one hundreds yards if the wind is blowing just right.

And now, thankfully, there is a Fatburger. As I wrote a couple weeks ago, Fatburger has returned to Pasadena - there was one on Arroyo about a decade ago - in a location that used to be a Taco Bell a few years back. I think it opens today but the owner works with my brother on another business venture so I was able to get an invitation to the "friends and family" event yesterday.

My relationship with Fatburger has ebbed and flowed over the years like no place else. Some of the locations I have been to - say, the now-gone West Covina and Monrovia locations - have just not been good and I've let Fatburger slip from my mind for a few months. There was a time when Fatburger vs. In-N-Out was a legitimate debate among my friends. I have not heard the argument made in almost a decade. News of a Fatburger closing these days is less surprising than a video rental store going out of business.

But then there are other times when Fatburger comes up and you remember why you fell in love with the joint in the first place. Burgers at the location on Vermont before a show at the Greek; a Sunday drive when a Fatburger you'd forgotten about long ago comes into view just as you can't take your hunger anymore and are genuinely considering eating at Burger King. A burger cooked on one of those older, seasoned grills, some onions rings and a cup of chili and all is right with the world. You have Ice Cube's "It Was a Good Day" stuck in your head the rest of the day. ("No helicopter looking for a murder/ Two in the morning got the Fatburger.") 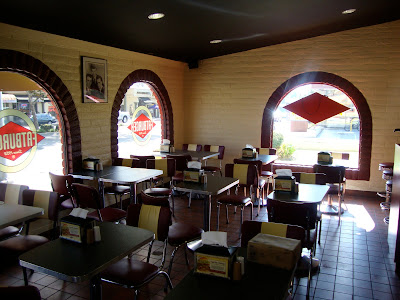 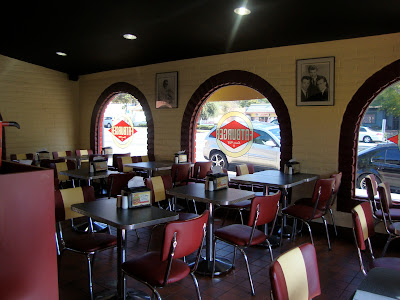 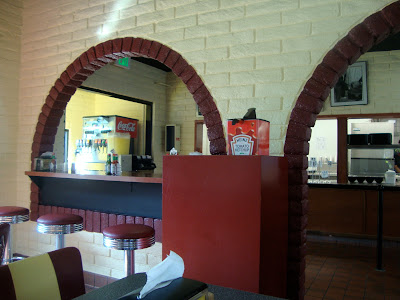 It's not terribly hard to guess that once upon a time this was a Taco Bell, is it? In my teenage years it was a frequent stop for cheap tacos with friends before heading down to Dodger Stadium. I only went there once as an adult - my friend Bryce and I were watching the NLCS one year, a Taco Bell commercial came on and he said whatever the particular promotion was (I don't remember) looked good. I said I would take him to Taco Bell if he shot some pool with me at the Rancho. 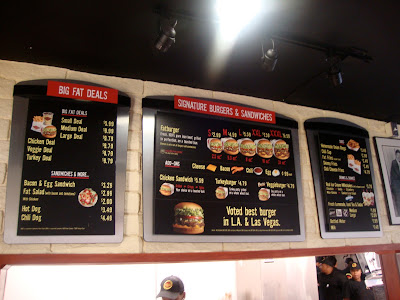 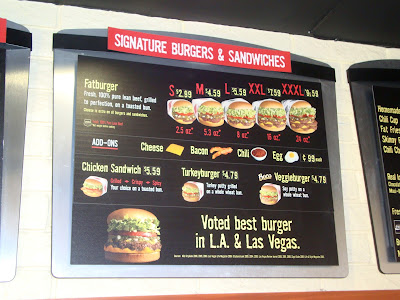 Usually we just get the "medium" 5.3 oz burgers and they are more than adequate, but I figured this time I'd order us the half-pound burgers. With an order of skinny fries to share and a couple medium sodas. I reached for my wallet after my order was rung up; it turns out the food was on the house. I left a couple bucks in the tip jar, upon which everyone in the kitchen shouted "Tip, tip, hooray!" (Later, when the owner asked my opinion of the place, this was the one thing I said needed to be fixed. I cannot believe anyone enjoyed that interaction.) 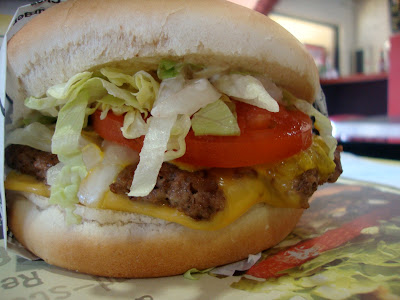 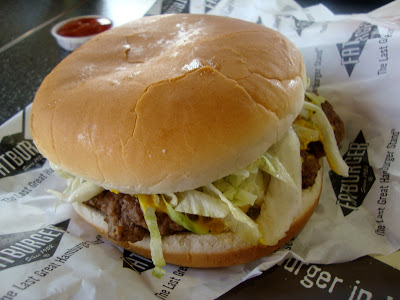 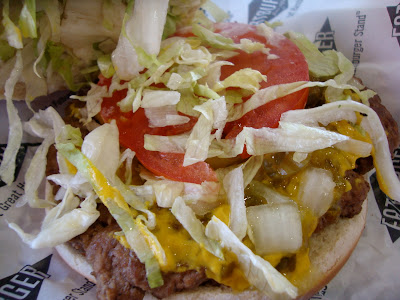 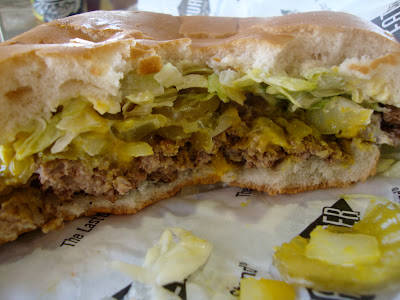 Elizabeth's burger with cheese and mine without. It was the most enjoyable burger I have had in weeks. I have missed having you in town, Fatburger. Welcome back. We'll meet again someday on the avenue. 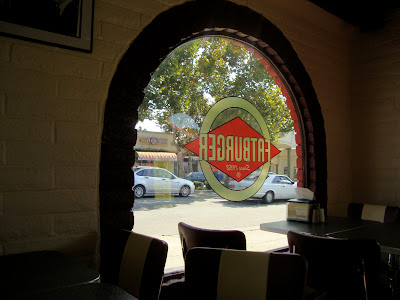 The Slaw Dogs across the street, partially eclipsed by the Fatburger logo - a picture so blatantly symbolic even Steven Spielberg would be ashamed.

awesome one the house burger! Happy Halloween to you. I've never actually had a fatburger burger despite passing the joint everyday back when i lived in Los Feliz. I'd only ever order the fat chili cheese fries, which.are.amazing. :)

That's funny. I know people who haven't had a Fatburger before because they don't eat meat or they've just never been to a FB... but I've never met anyone who has been to Fatburger, eaten the chili, but never had a burger.

Glad to hear it was good AND a little jealous that you got to go early and get your food for free!

i wonder why they didnt gut the place or at least redesign it? like you said, it screams mexican.

My guess would be to save money. Personally, I don't care. As long as the food is good I would eat in a restaurant decorated with Celtics memorabilia.

I can't agree enough with you about the excruciatingly unpleasant tip acknowledgment process. I'm so glad Buy Pink Stuff for Boobies Month (aka corporate pink-washing) is over so I can go back to Vons. I refuse to patronize places that pull that crap.

For those who may not be familiar with what SuperLarge is talking about:

The month of October at Vons, the checkers asked every customer if they would give a dollar for breast cancer research. Every time someone said yes, they announced it over the loudspeaker and every single employee stopped what they were doing and applauded.

There may be a better example of the proverbial wrong execution of a right idea, but I can't think of one.

I was in a line 6 deep at Vons - no doubt deeper than it should have been because of the constant interruptions - and decided right then that there was no way I was giving money. Would I normally? Absolutely. But the idea of being applauded in front of everyone for giving a dollar to charity disgusted me, as did the idea that people had to interrupt their jobs to do it.

Yeah, what he said.

Mmmmm Fatburger. That is all.

Beware the drive-thru during lunch. Ordered a medium cheese burger and skinny fries. Cashier said it would be just a minute--and it was...maybe shorter. I said, "Wow. That was quick. Don't you make your burgers to order any more?" He said they pre-make some of the more 'popular' burgers during lunch to ease the rush.

To be fair, he did offer to take it back and have a fresh one made in just a few minutes. With feisty baby-on-board, I opted for the quick and easy route, so I really have no reason to complain. Burger was still good, but the fries were sad little spuds.

Just one of many reasons why I never go through the drive-through. But then again I don't have a feisty baby.