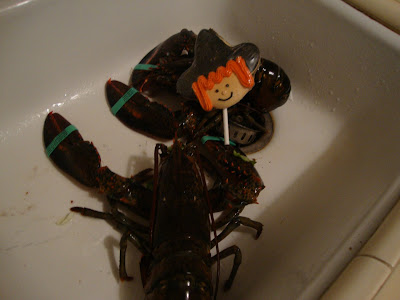 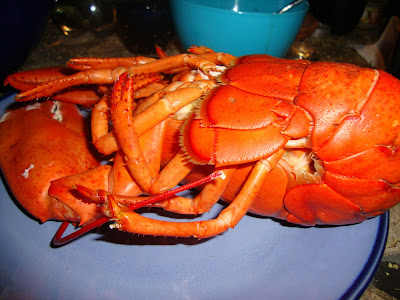 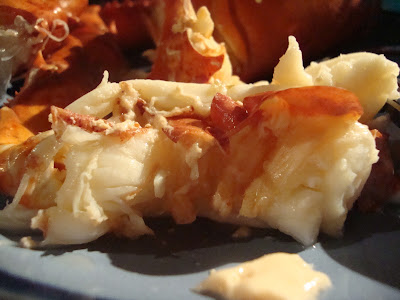 Bristol Farms had lobster at half price, for only $8.49 a pound, so I got three of them. My buddy Phil told me I should put Halloween candy in the claw of one of them and call it Lamar Odom. But I didn't have any candy. I did, however, have a Halloween cookie that I gave Elizabeth in 2008. She didn't want it so it just sat in a drawer, something that I intended to keep as a souvenir for the rest of our lives. Unless I came up with a better idea for it. And putting it in the claw of a lobster so I could name the lobster Lamar Odom was definitely a better idea.

Elizabeth's mom cooked the lobsters and they were excellent. 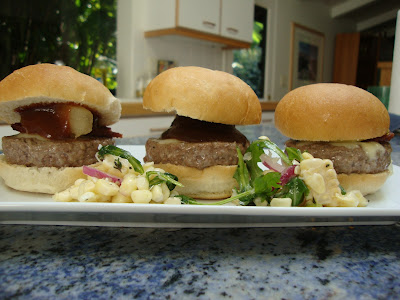 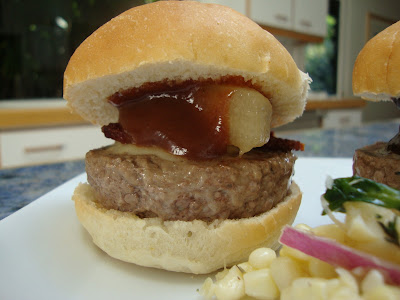 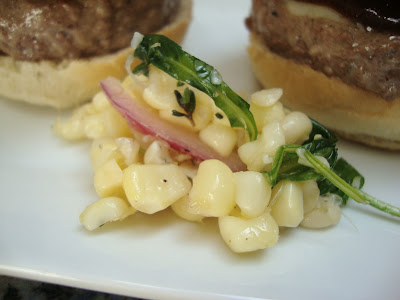 Saturday I was watching college football with my dad so I made some sliders. I used Fresh & Easy's patties and buns but added some thick bacon from the butcher shop, sharp English cheddar and mustard pickles. I added a couple dollops of corn salad to the plate to make it look pretty. If you think I went to Cost Plus and bought an appetizer plate just to make the photos look better, well then you know me too well.

The sliders were good. Nothing special, but perfect for eating in front of the TV while watching football. 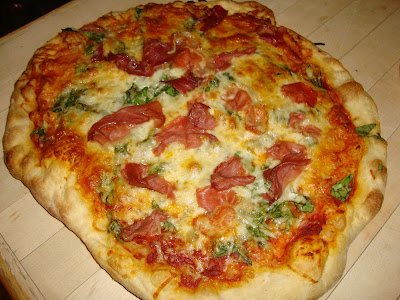 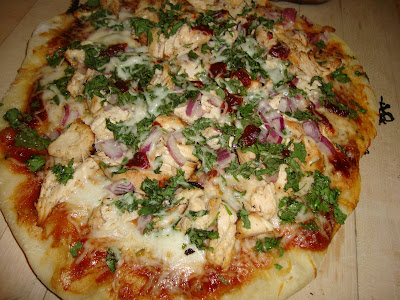 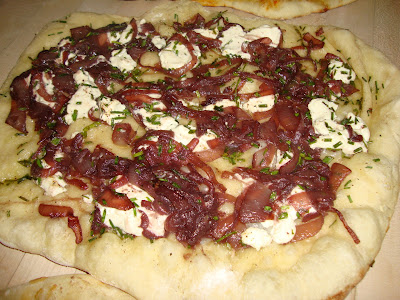 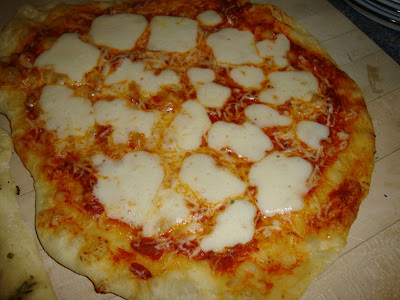 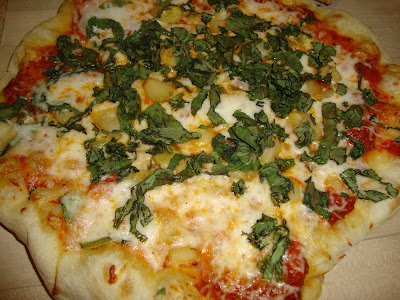 Saturday night, Elizabeth, her mom and I had dinner at my parents' house. Elizabeth's mom wanted to try my pizzas cooked on the grill, as she had never tried that before. The first pizza is prosciutto and spinach. I had some fresh spinach I'd purchased at the farmers market on Thursday and when I'd asked Elizabeth what else I should add, she said prosciutto. Later, she realized she'd meant to say pancetta, which would have been better. This was my least favorite pizza that I made.

The second pizza was barbecue chicken: a grilled chicken breast from Taylor's, some barbecue sauce, mozzarella, red onion and cilantro. This was my favorite pizza of the evening.

The third pizza was caramelized onions, goat cheese and chives. Originally I had planned to make balsamic onions, but my parents didn't have enough balsamic vinegar. One thing they do have plenty of, however, is wine. So I added some pinot noir to the pan and reduced it until the onions were covered in red wine. This was good, although I wish I'd added some jalapenos to it to give a little kick.

The fourth pizza was a cheese pie: mozzarella and Drunken Goat. Very good but nothing too special about it.

The final pizza was my usual roasted garlic and basil. This was the first pizza to disappear. My dad had several slices of it. While 6 of us were sitting at the dining room table, my dad stayed on the couch and watched the UCLA football game. I could tell my mom was getting annoyed but I understood his motivation: that was UCLA's fourth and most likely final victory of the season, another losing season almost guaranteed. 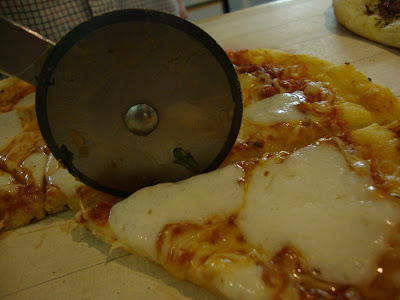 My brother wanted to take an "action shot" of me cutting the pizza. This was unnecessary but he is my brother so I said I would use it. 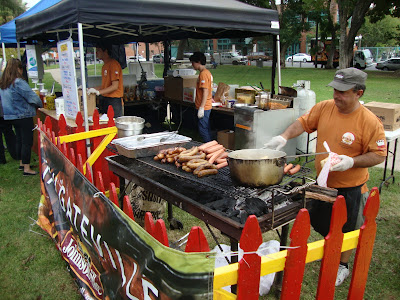 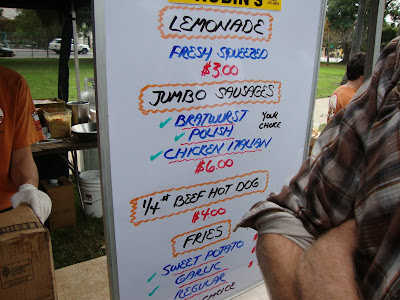 Sunday, I volunteered at a "walk-a-thon" in Central Park. Robin's BBQ had a stand there. 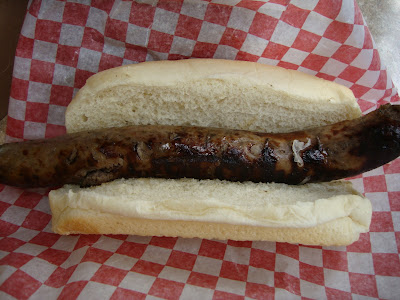 My dad got a bratwurst, devoid of toppings as usual. 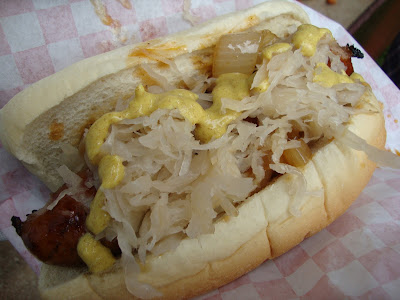 A Polish sausage with onions, sauerkraut and mustard. 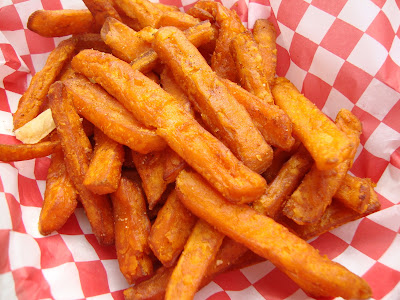 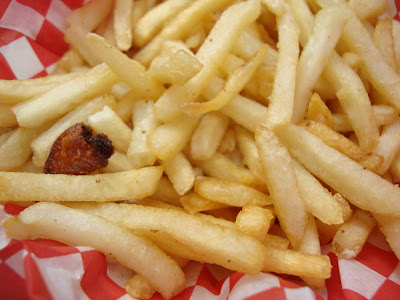 My brother got the garlic fries and I had a few. The aroma of garlic was strong from 30 feet away - up close it was overpowering. If you dipped these fries in Zankou's garlic sauce, it would be so strong even I wouldn't try it... and I'm the idiot who once put Zankou sauce on a donut. 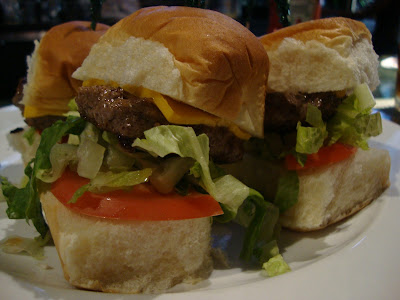 After volunteering for a few hours, I ducked into 72 North to quench my thirst with some cold pints of Guinness and watch football. My friend Carla was there and she got a plate of sliders. I took a tiny nibble of one, but I'm still adding a photo of the whole plate. 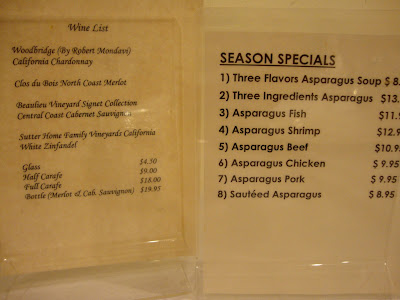 For dinner I met up with Elizabeth and we went to Golden China. The seasonal specials of asparagus items are still there, just as they were back in January. Perhaps "season specials" isn't a direct translation. 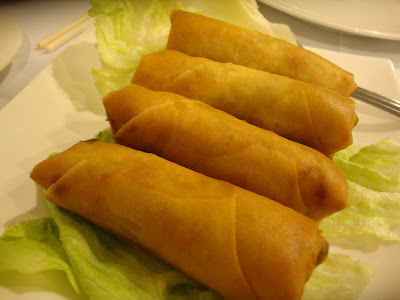 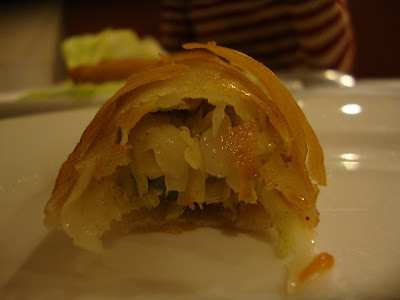 There are some evenings - cool fall evenings when you can feel a little bit of rain coming - when I could eat two dozen egg rolls. This was one of those evenings, although I limited myself to two, not two dozen. 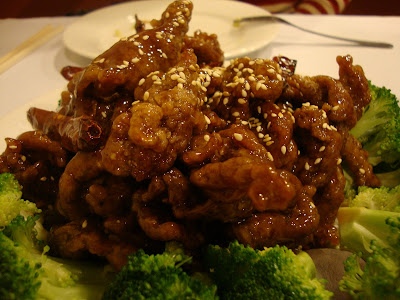 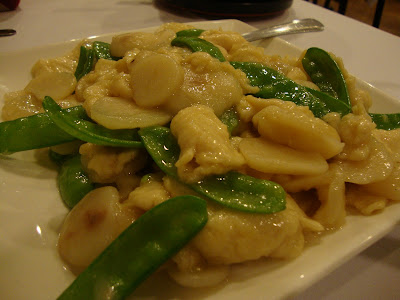 I got the house special beef and Elizabeth got the chicken with snow peas. Both were great and there was plenty left to take home, just like always.
Posted by JustinM at 1:44 PM

The lobster was delicious but I wish I hadn't cut my finger. Totally worth it though. And you know I love Golden China. My mom enjoyed it too!

You shouldn't have tried to take away Lamar's cookie. Who knew Lamar Odom would put up such a fight?