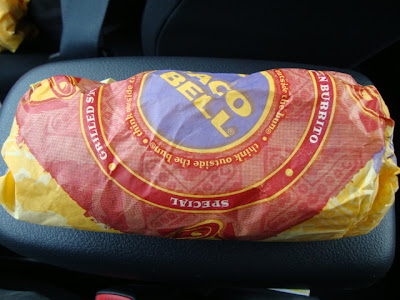 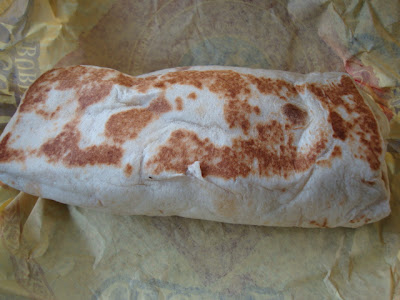 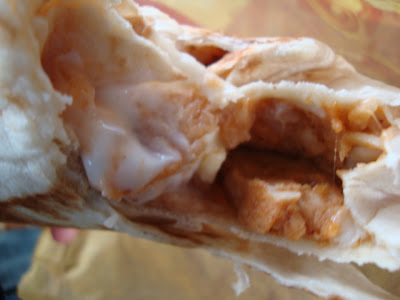 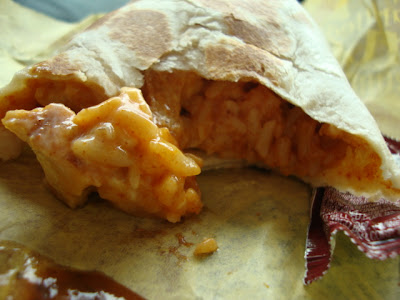 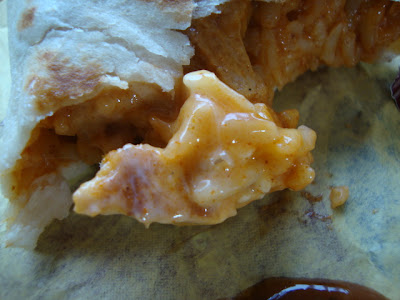 You learn something new every day. I was looking at the Taco Bell website to find out the correct order in which to put all the words in the title of this product, and I realized that Taco Bell spells the word "stuft." I had assumed it was "stuffed." I don't know what could have possibly given me that idea.

The first real dish I ever made myself was enchiladas. I was 11 years old and some friends and I were doing a school project where we were pretending to host a cruise ship for our classmates. I made enchiladas. (Don't try to make too much sense of those last two sentences... I was there and I still don't understand.)

I'm not a big fan of Taco Bell, but every once in a while they come out with a promotion that I like. So when I was driving around Saturday, without having eaten lunch, and found myself right by a Taco Bell with a sign in the window for their newest creation, I decided to give it a try. I stood around at the counter for several minutes without seeing anyone working. Finally a guy came around the corner - acting as if I shouldn't be there - and begrudgingly took my order.

A few minutes later I received my stuffed stuft burrito with a grumbled "Sorry for the wait." I took it to the car to eat so I could listen to football on the radio. The burrito was big, no question about that. I bit into it - a giant mouthful of sour cream. I inspected a little more. As has happened before at Taco Bell, the components of the burrito were all separated into different areas. The sour cream was bundled up in a corner of the burrito, the chicken in another quadrant, the rice in yet another. I'm not sure how this happens. Does Taco Bell instruct their employees to assemble items this way?

The burrito wasn't terrible but it wasn't anything very good, either. The one adjective I would use to describe it is "bland." The sauce, the chicken, the rice... none of it had much flavor (although the sauce was extremely salty, which I suppose is a flavor). There was cheese in there but it was flavorless. Those enchiladas I made when I was 11 were certainly better.  Of course, Taco Bell recently added their two new kinds of hot sauce, both of which I really like, so I added a few squirts of the fire roasted sauce, which helped a lot.

This wasn't a terrible product, but it's not something I'll ever try again. If you have a tortilla and some cheese at home, I guarantee you can make something tastier and much healthier.
Posted by JustinM at 9:44 AM

Wow, the outside looks promising - nice and toasty.
The inside, not so good. Stuft with baby barf.
Sorry ------()

Yeah, I don't know why I keep trying these Taco Bell things. (Well, I guess I do know - they're always popular posts when I write about them.) The only thing I would actually say I "like" at Taco Bell is the volcano taco.