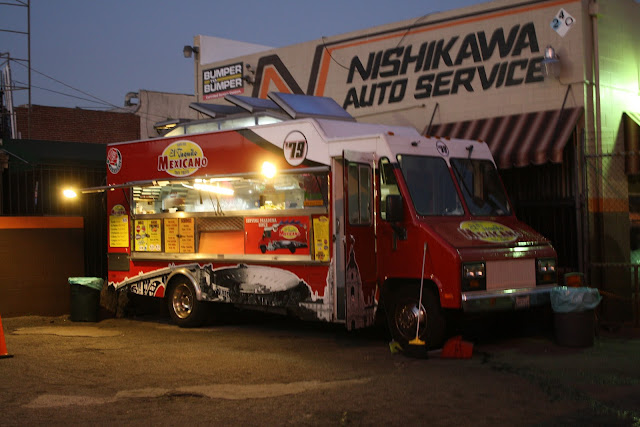 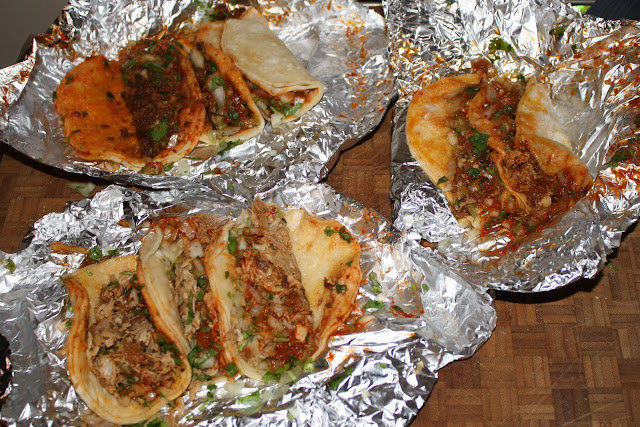 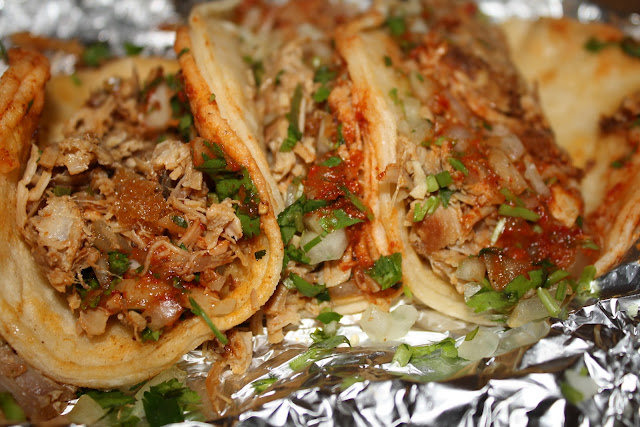 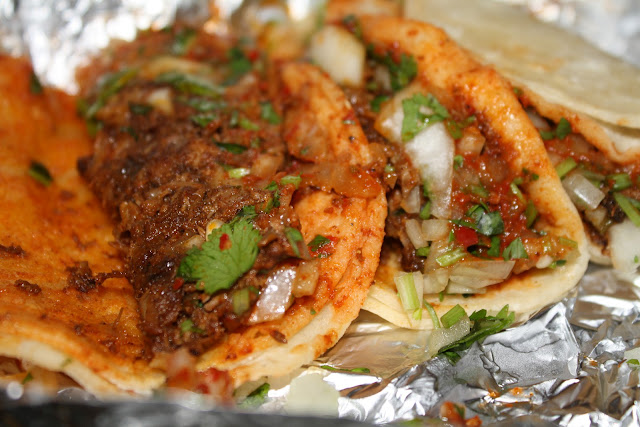 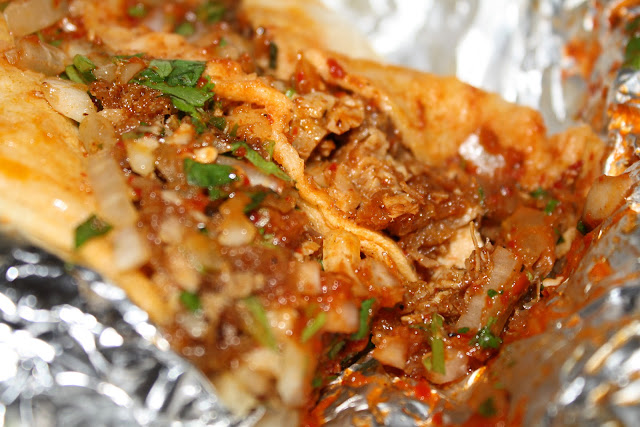 I only go out a tiny fraction of the amount that I used to, but every once in a while there is a game I want to watch with friends, or to throw back a few happy hour beers with a buddy I haven't seen in a long time, and I head up to Old Town. (It's just under two miles from where I live, so I walk.)

On the way back, if I haven't eaten, I send Elizabeth a text. It usually goes exactly like this:

Me: Want me to pick up some tacos?"
Elizabeth: Yes!

Most every time I stop by the El Taquito truck in the Nishikawa Auto Service parking lot. (Arturo's truck is just a couple of blocks north, and it's fine, but I like everything about El Taquito just a little bit better.) My standard order on such occasions is this: three carnitas, three chicharron, three al pastor.

Back home fifteen minutes later the routine is just as immutable: Elizabeth eats two carnitas, I eat two chicharron and one al pastor. (The next morning the leftovers are available for her to take for lunch, but if she forgets - which is more often than not - I have eaten them before my first cup of coffee is poured.)

I haven't said anything about the tacos and I'm not going to say much. The photos are self-explanatory. If you think these look disgusting you won't be coming here, but then again you're probably not the type to consider lining up at a taco truck in the first place. Nothing wrong with that. But if you think these tacos look great, you can probably imagine how they're going to taste and you don't need my description.

The El Taquito truck is open until 1 most nights of the week and 3 AM on Friday and Saturday. Those of you reading that in places like New York or even some parts of Los Angeles may shrug and say "So?" But I promise you in Pasadena that's not very common. I have heard several people call these the best tacos in Los Angeles. I would not go that far, but they are indeed delicious and I feel lucky to have this truck just a mile south of Old Town.
Posted by JustinM at 11:40 AM

Yes, yes, yes... the Nishikawa Truck! Many moons ago (when I too used to go out a bit more often) I remember going and placing an order for 78 (yes 78... group order) tacos at this lovely rig. Problem was, it was a summer eve and the Dodger game had let out and such, and there was a line of about 40 fine inebriated folks that formed behind me almost magically as I neared the front of the line... Let's just say no one should ever be subjected to the "taco-deprevation death stares" I had endure that evening... great tacos though

Anon: You have chosen wisely.

Anon: Are you sure there weren't just 20 people behind you and you were seeing double? Either way, ballsy move ordering 78 tacos under any circumstances.

Those look freaking delicious. I recently moved from Phoenix to St. Louis (suburbs) and I have not found a decent taco yet. I know they're out there, most likely hidden in the city, but the suburbs have nothing.

You must be excited! Just saw crispy shrimp tacos coming back to Del Taco! :D I'm looking forward to trying them based on your reviews alone ;)

Ali: I would love some St. Louis tips. There are only two big cities in America that I have been to more than once that I did not like, and that is one of them.

Anon: For sure. February 15th. Did I ask Elizabeth if we could put off Valentine's Day for one day so that I could take her to Del Taco instead? You know it.

Having moved from western Mass to St. Louis, I can understand not liking it... And you won't find a food truck open at 3 AM here, or even 3 PM for that matter; they mostly just serve lunch.

Ali: Yup, good tacos are hidden two places in STL: on Cherokee Street on the near south side of the city, and up in Overland (by the airport). Try La Vallesana (2801 Cherokee) or Taqueria Durango (10238 Page Ave) Mmmmmm!

I did love the Budweiser tour.

A classic truck! – it’s location, at least, and probably the same folks that have been operating there since high school (and then some, I imagine… Oh, I just noticed the “’79” on the truck – do you think they’ve been there since then?!)