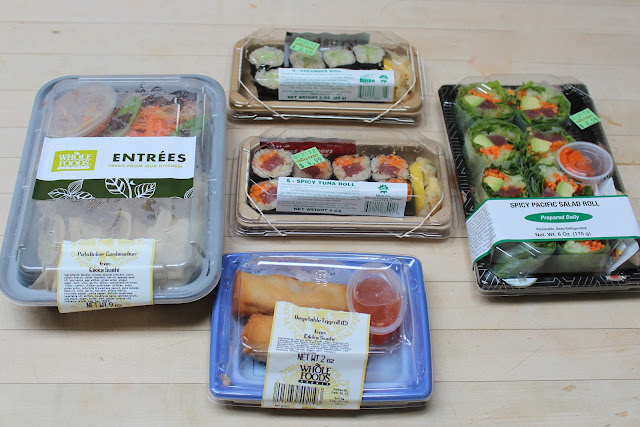 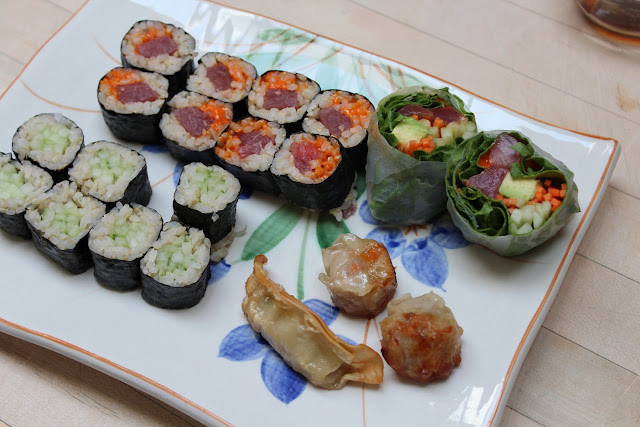 If I told you the search terms that most frequently lead people to this blog, the results would not surprise you: certain fast food promotions, at least a dozen specific Trader Joe's items, and some Pasadena restaurants that I have written about. But something that surprises even me is that every day, quite a few people stumble upon this blog by searching for "Whole Foods Sushi." (I just Googled it myself and was astounded that a post I wrote almost three years ago came up so high. My daily views back then were probably 5% of what they currently are.)

So I thought I'd take some better pictures and write about Whole Foods sushi once again. On Monday, Elizabeth and I had stopped by my parents' house; my mom also had the day off. We ran down to Whole Foods to pick up a few things and decided to get some sushi for lunch. 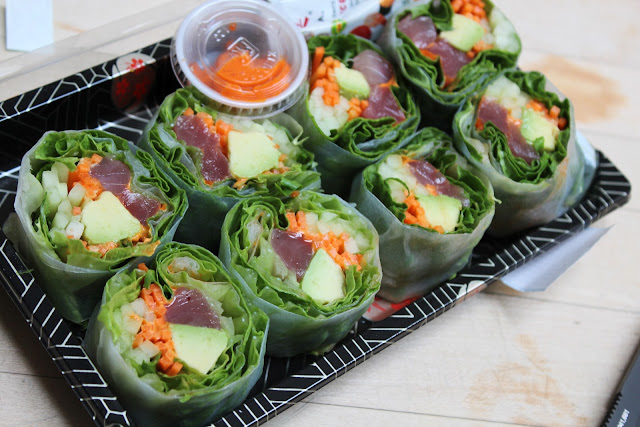 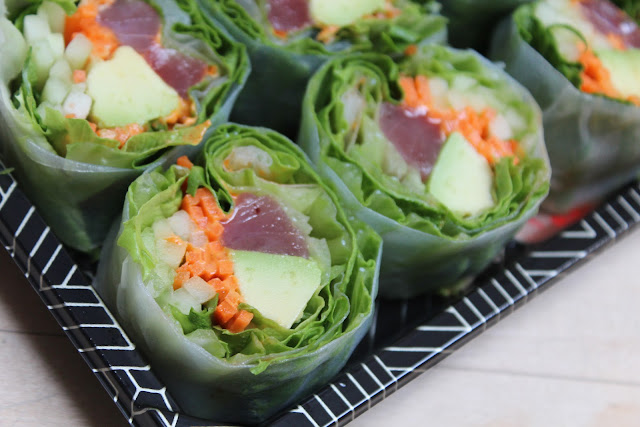 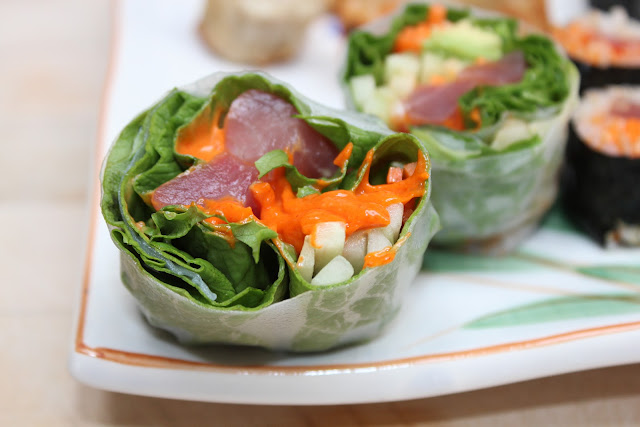 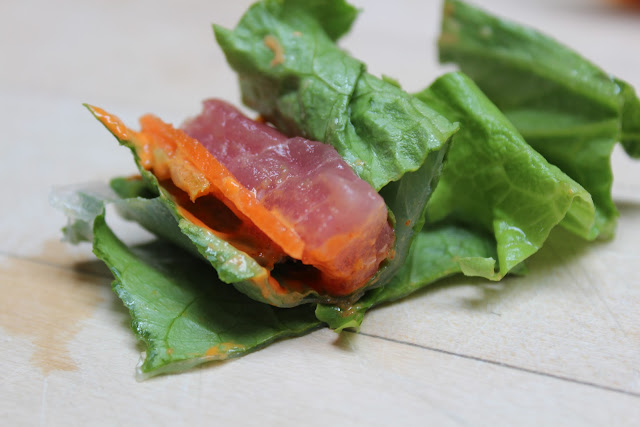 The only one of the dishes I had not had before was the spicy Pacific salad roll, containing tuna, avocado, carrots and cucumber, wrapped in lettuce. In a little cup was an orange paste, a color not of this world, that I think was supposed to provide the spiciness. It did not. The tuna was fresh and overall the dish was pleasant, but extremely bland. If the sauce had contained some kick it would have improved things. The nine dollar price tag seemed much too high as well, but complaining about Whole Foods' prices reminds me of that old fable about the woman and the snake ("Lady, you knew I was a snake when you picked me up"). 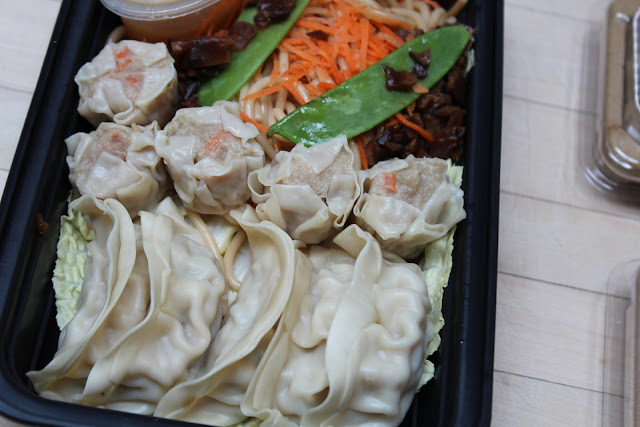 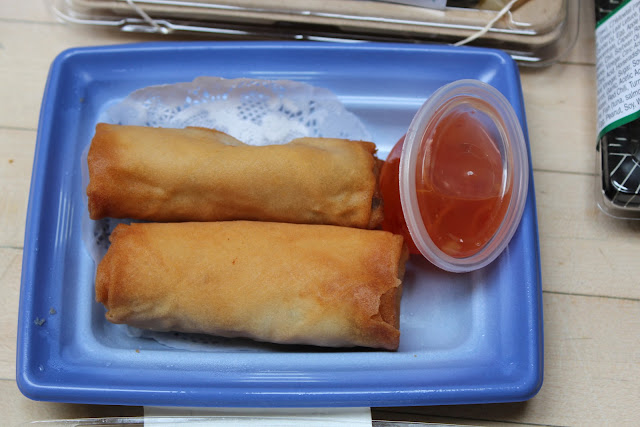 The dim sum and the egg rolls were pretty straightforward. I reheated the former in a skillet of hot oil for about two minutes; the latter for one. They were both tasty but did not have a whole lot going on. (I liked the shu mai the most out of the lot.) 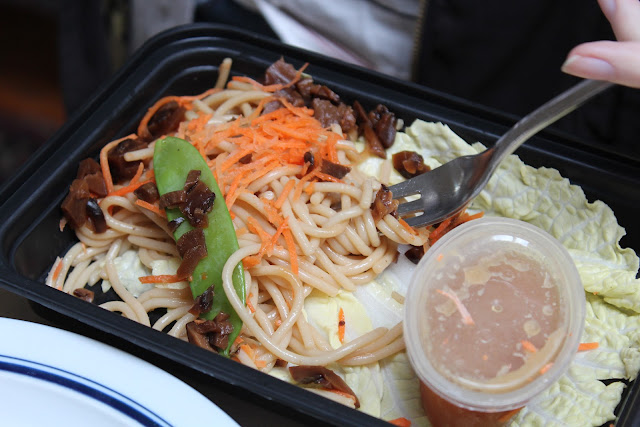 The noodles, mushrooms and peas were actually every bit as good as the dim sum, which I did not expect. 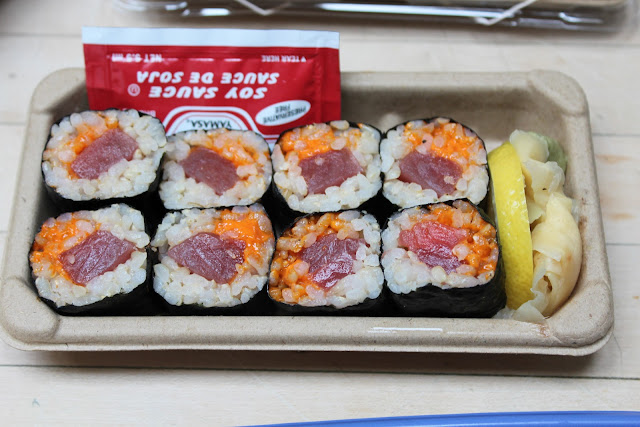 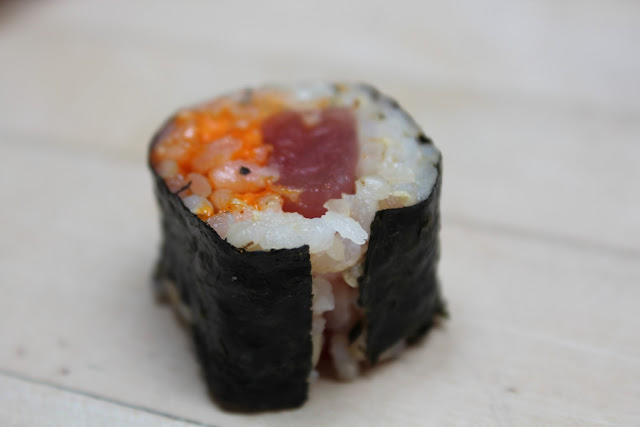 The spicy tuna roll is often good at Whole Foods, as long as it has been prepared recently. This one tasted like it might have been out for a few hours. It was still good, but it could have been better. 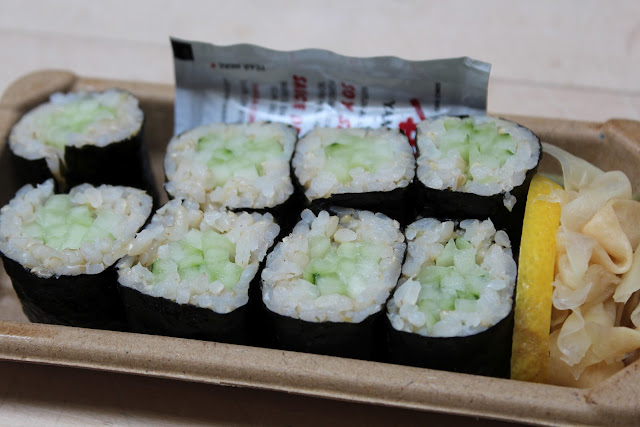 The cucumber roll, on the other hand, was very fresh and I loved it.

All things considered, Whole Foods sushi is reasonably priced for what it is, as long as it's good. The reason Elizabeth and I don't get it nearly as much as we used to is that far too often we were dissatisfied with it. But this lunch was good.

See, you're just boring me now. If you ever want to meet up in person and say these things to my face, just let me know where. (But we both know you never will.)