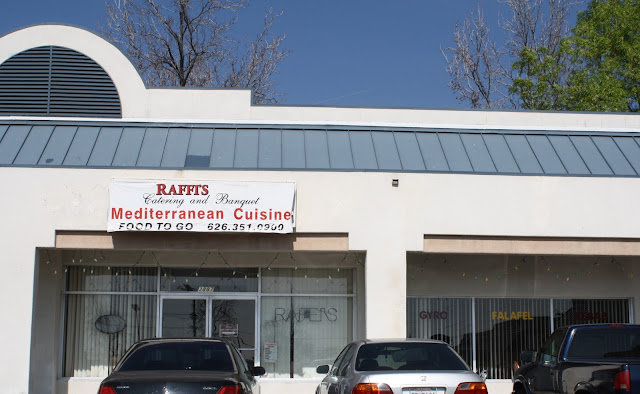 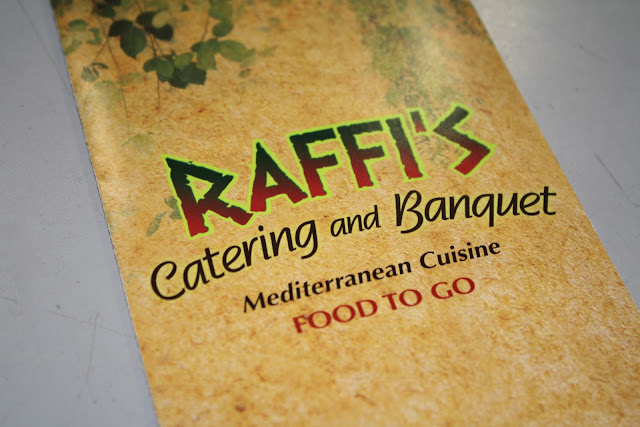 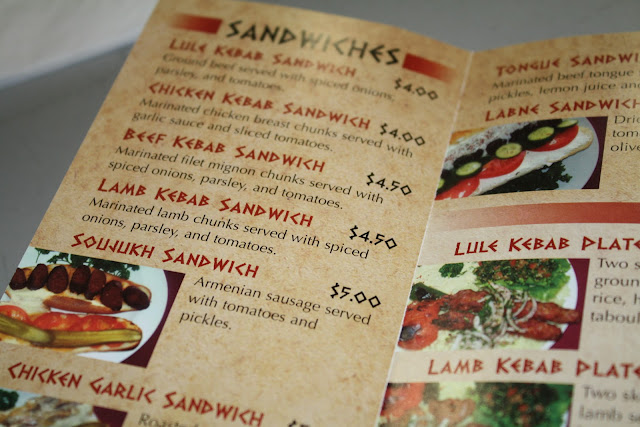 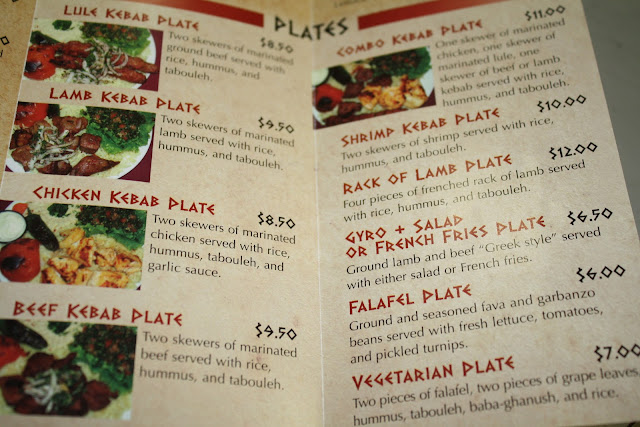 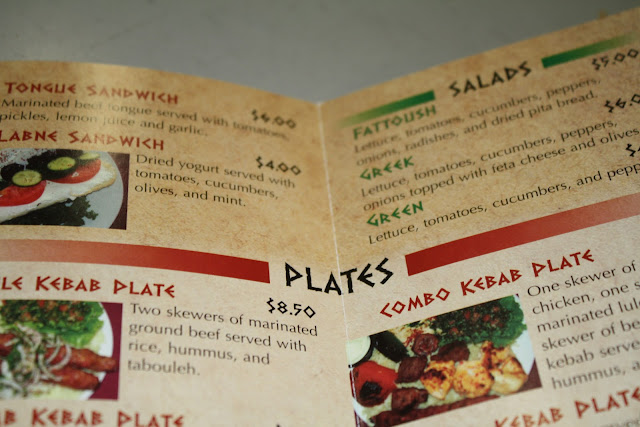 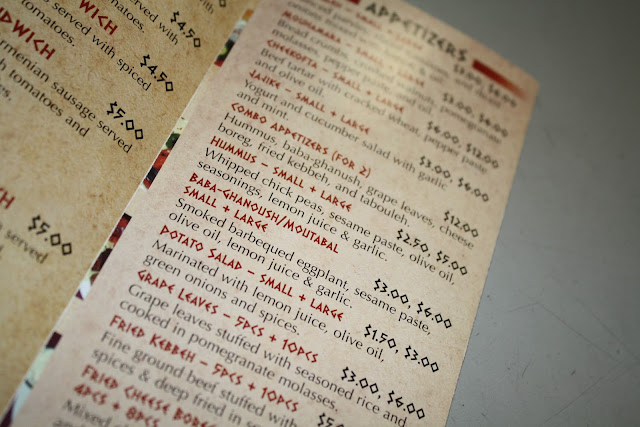 With the exception of Mexican food, there is probably no cuisine that I find I either love or hate with the consistency of Mediterranean. I've had meals of grape leaves, grilled veggies and roasted halibut that left me nearly speechless, muttering something along the lines of "Why don't I eat this food more often?"

I've also had far too many meals of dried-out kabobs, flavorless falafel as firm as a fist, and stale pita bread. Meals that likewise left me saying "Why does anyone eat this food?"

As a consequence, I don't eat Mediterranean all that frequently. (A quick Google search of the 836 previous posts I have written reveals that I have only referred to one restaurant as Mediterranean: Pita Pita, a restaurant I certainly love.) But the other day I was helping out an old coworker of mine with something in Sierra Madre. We talked about what to do for lunch. There are several restaurants in that town at which I do not mind eating, but I have no desire to get food to-go from any of them. (To be fair, I feel that way about most restaurants everywhere.) He suggested Raffi's and I said sure. He ordered the chicken kabob plate and I ordered a sandwich.

Raffi's is in a shopping center in the northeast corner of Pasadena. (It's not possible to go any farther east; it's only possible to go about a mile farther north.) I ordered the food, drove up there (a three minute drive) and waited less than five minutes. 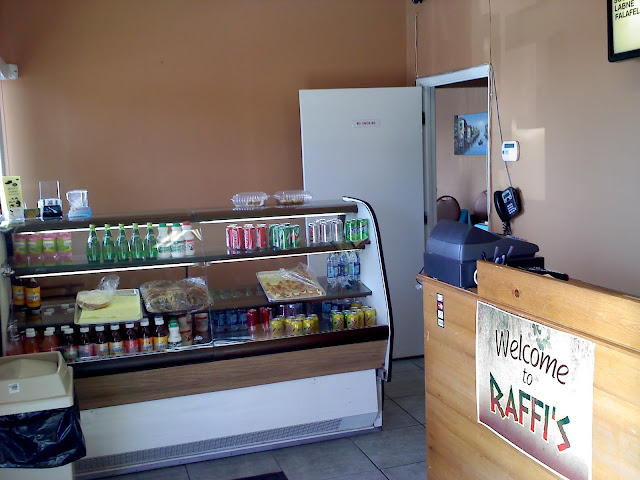 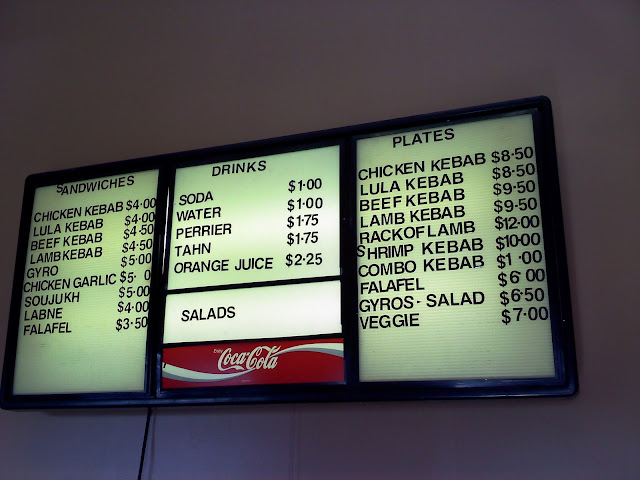 There is plenty of space available for parties and catering events, but the area for ordering and picking up is quite small. After waiting less than five minutes, the lady handed me a heavy plastic bag.

"This is mine?" I asked incredulously. The thing might have weighed five pounds and the total for the two of us was just a little over 14 bucks.

Three minutes later we started taking things out of the bag. 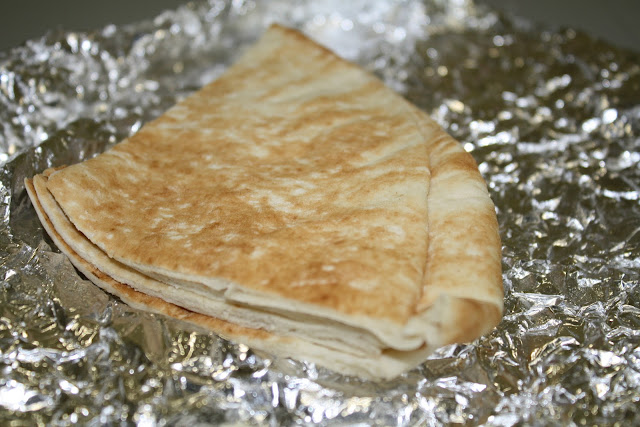 The pita bread was outstanding, fresh and warm. 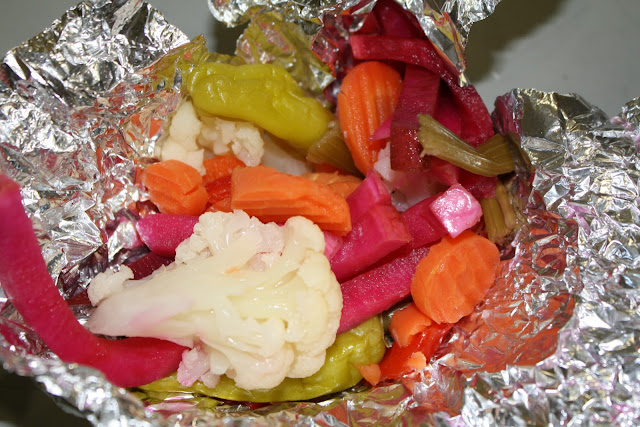 In a ball of foil the size of a softball was an assorted of pickled vegetables. 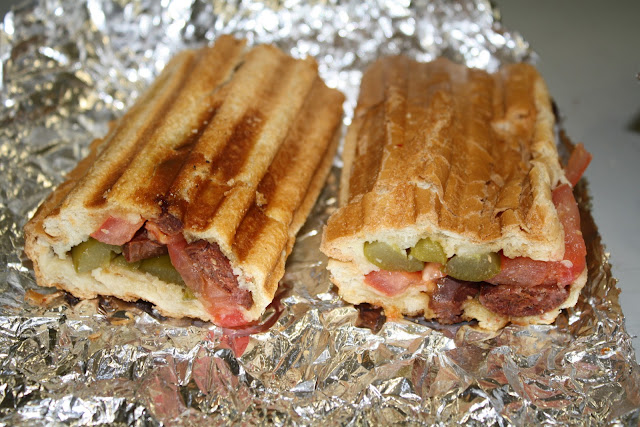 I ordered the soujouk sandwich. Soujouk is a dry sausage spiced with garlic, cumin, red pepper and various other spices. (It's not quite as powerful as basturma, but it can get pretty flavorful.) I've eaten soujouk on pizzas and slicked with olive oil on pita bread, but in a roll with pickled vegetables and garlic sauce has always been my preferred method.

The sandwich came wrapped in two separate foil packages, each containing a half of the sandwich. The sandwich was made up of soujouk, pickles and tomatoes. Of course I removed the tomatoes. 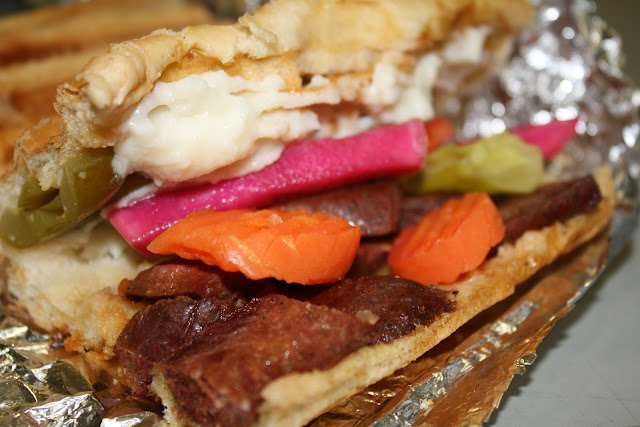 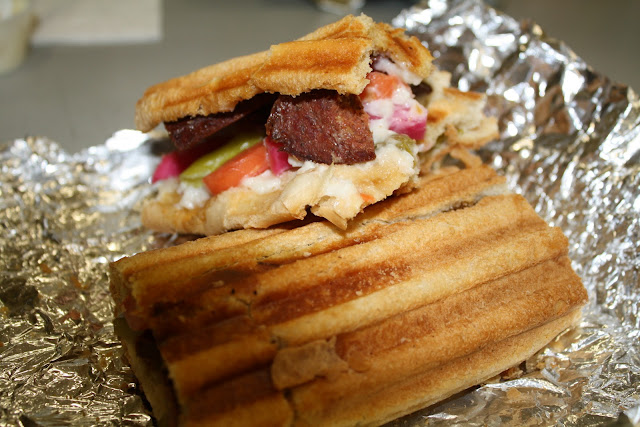 I added pickled turnips, carrots and peppers and a healthy amount of the provided garlic sauce. 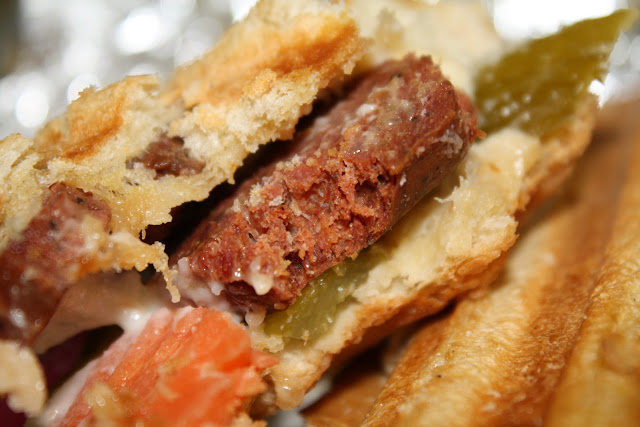 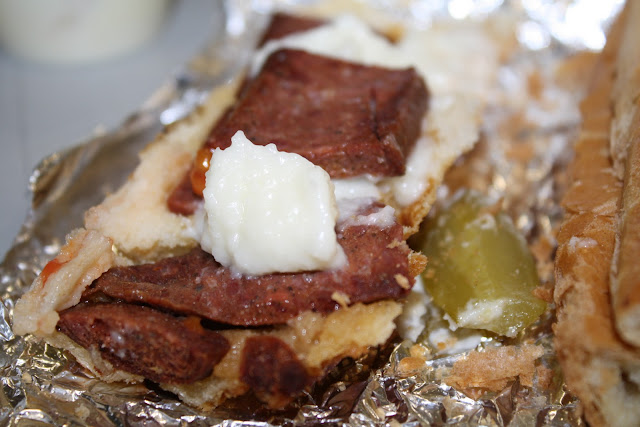 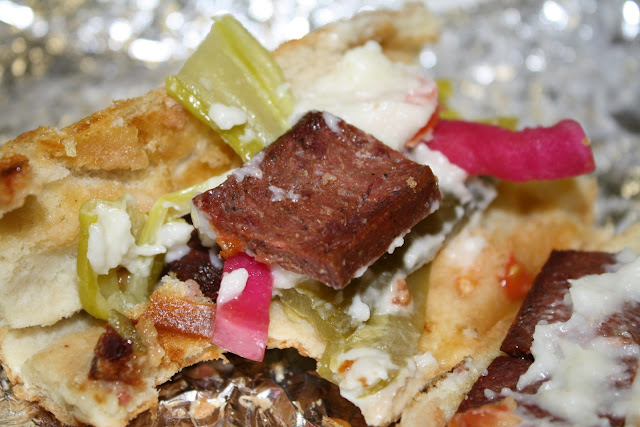 The sandwich was outstanding, one of the best soujouk sandwiches I have ever eaten. The sausage had plenty of spice to it but was not too hot, and the pickled veggies and amazing garlic sauce complemented it wonderfully. For five bucks, this is one of the best deals I have had in a long time. 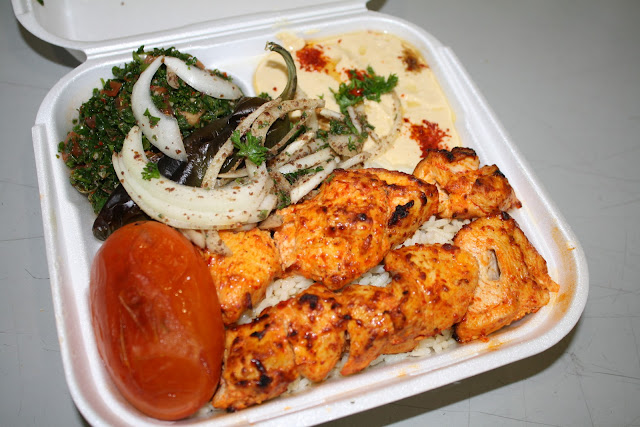 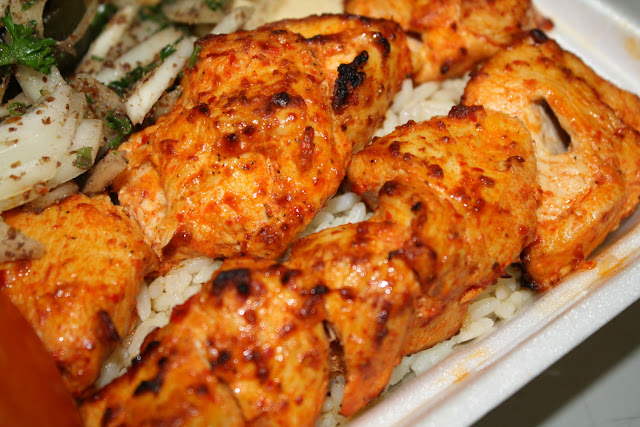 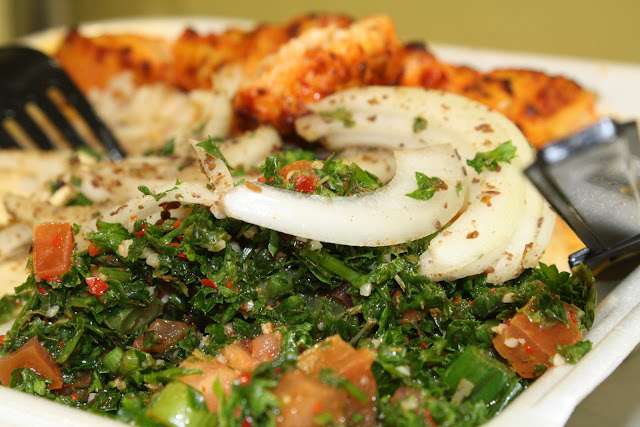 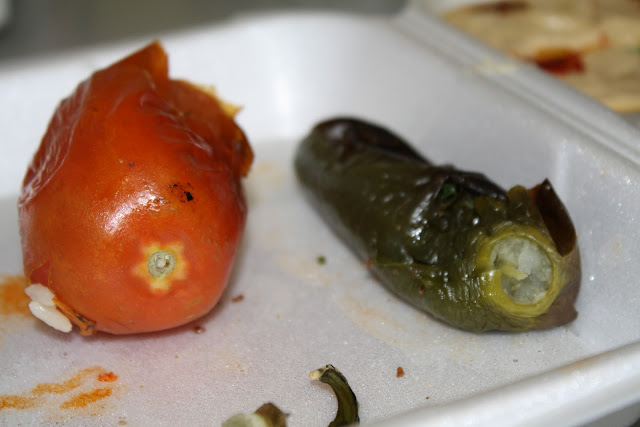 My buddy loved his kabob plate. There was plenty of chicken and it was moist and flavorful. He didn't comment on the rice, tabouleh or hummus, but he ate almost all of it and proclaimed himself "stuffed."

I'm not ready to say that I love Raffi's after just one visit, but I certainly loved this lunch. That's a part of town where I don't really have any favorite restaurants, but I will absolutely return for another sandwich or two. They were fast, friendly, the prices were great, and the food was delicious.
Posted by JustinM at 10:00 AM

I've never had soujouk (or soujukh). But now I want it.

Don't be afraid to try Soumarelo on Allen , a few blocks south of Washington. It was my main spot when I lived in the neighborhood. Not the fastest, but really good!

SuperLarge: I'd like to say that Zankou's has a little bit more garlic flavor, but if I'm being honest, I bet I would have a hard time differentiating in a blind taste test.

Nosh: I was afraid. But now I am not, thanks to you.

I HAD to go get a gyro because of this post. For this, I thank you.

You can keep leaving dirty comments. And I'll keep erasing them. And laughing at you. Because we both know you're a chickenshit.

Bekah, I let people comment anonymously and don't require people to use a word verification to post just because I want to make it as easy as possible for people to leave comments. The downside to that is:

1) I get at least 100 spam posts per day. Blogger is great at catching them and deleting most for me, so that's not really a big deal.

And 2) I get these anonymous internet tough guys who write things that you know they would never say to my face. And this person who leaves dirty comments every day. I used to feel sorry for those people because you know they don't have anything going on in their lives. (Guys with girlfriends or jobs don't go around leaving dirty comments on blogs about food.) But now I just laugh at them.

2. This non-blogger had no idea that there was a "dark side" to the blogosphere & people that would post nasty stuff! The worst I've seen is the comments relating to your balls & Tracie...which I chock up to potty humor...which I tend to enjoy.

Forget the pasturma, I would even take some soujok right about now. We have none of that stuff up here.