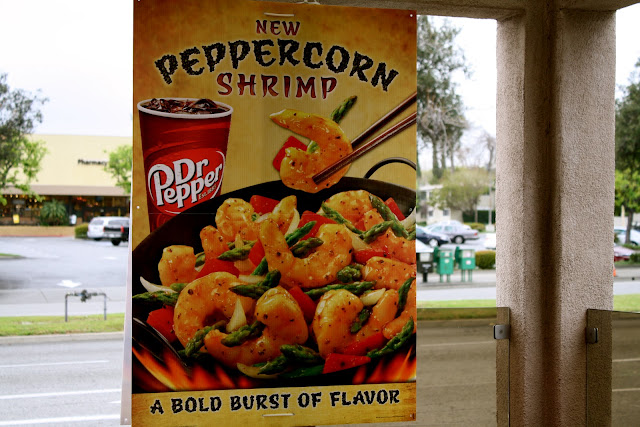 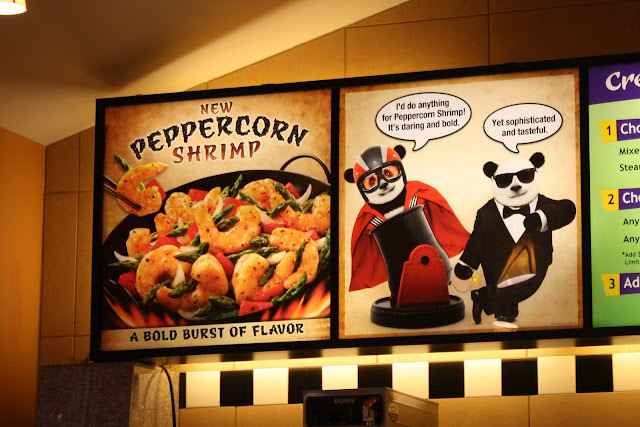 Once more I am drawn back to Panda Express to try a promotion. This time around it's the Peppercorn Shrimp: "marinated shrimp, asparagus, chopped yellow onions and sweet red bell peppers tossed in a signature sauce made from Thai green peppercorns and Asian spices."

There was a time, I have written before, when I ate at Panda Express a lot. I was a teenager, not too inquisitive about cuisine, and only a couple of years removed from high school, when we used to have Panda Express come in a few times a year and serve us orange chicken, which at the time I loved. These days I only make it back to Panda once or twice per year to try a new promotion. (And, with the exception of the Beijing Beef, I am usually disappointed.) 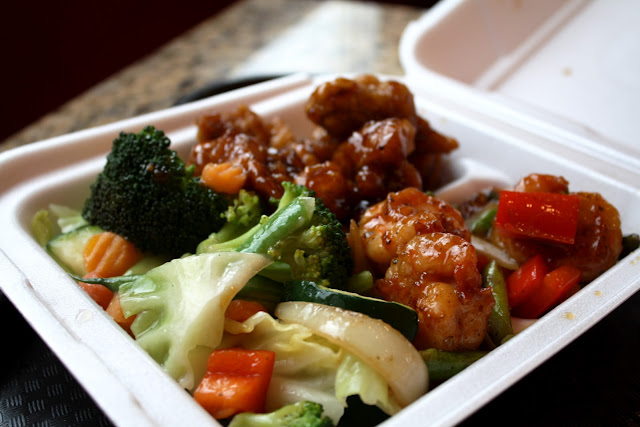 I got a two-item combo: the peppercorn shrimp and orange chicken, with mixed veggies on the side. The orange chicken was possibly the worst I have ever had from Panda. This was only an hour after they had opened, so I thought that it would have been relatively fresh, but it tasted like it had been sitting out in the steam tray for hours. (They don't put out leftover food from the day before, do they? The fact that I can't be sure when food was made when it's just sitting out in a steam tray is the main reason I stopped going to Panda years ago, long before I had a food blog.)

But, whatever. I was here to try the shrimp. 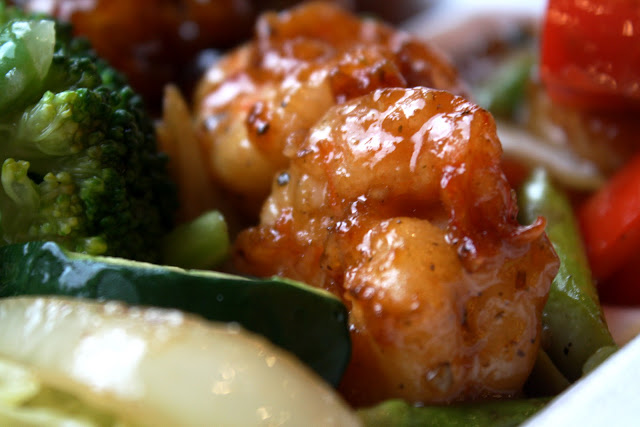 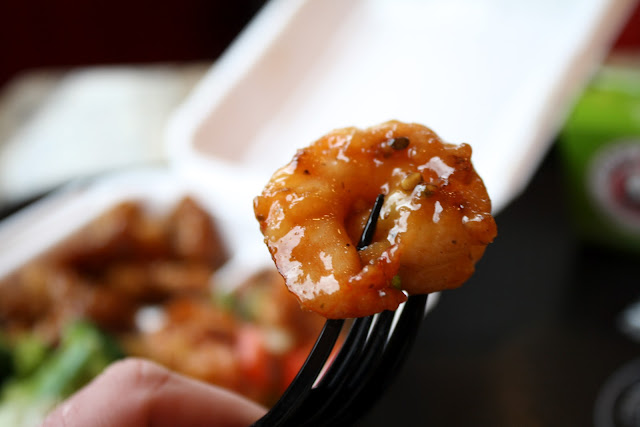 I wished I had received more than the few pieces I did, but what I got was quite tasty. The shrimp were cooked nicely and the sauce had an unmistakable pepper flavor to it. There were other spices, too, though I could not place them. Asparagus is one of my least favorite vegetables, so there is no point in me commenting on it, but the onions and bell peppers were nice in the pepper sauce.

Would I get the peppercorn shrimp again? Yeah, I guess so... but I doubt I will. The total for this combo was $7.94 - not what I would call expensive, but still a buck more than I pay across the street at Golden China for a lunch entree with tea, soup, salad, rice and an egg roll. And the entrees there are much better (and larger portions).

I may continue going to Panda Express to try out their new promotions (or maybe not), but that's the only reason I'll ever return.
Posted by JustinM at 9:30 AM

when i was in high school, one of our friends worked at a panda. she used to fill up the biggest box with orange chicken, then charges us 25 cents for it. 'twas heaven!

I still gots love for Panda after all these years. I think the best approach to guaranteeing fresh food is to request that it be made to order. A little fussy, yes, but so much tastier :)

Anon: Yeah, that sounds pretty sweet. I wouldn't turn that down, even now.

Gastronomer: I just don't think I could bring myself to ask them to make me something fresh. I'd rather just go somewhere where that's the policy.