Back at the end of 2010 - man, time flies - a reader from Scotland named Emily said she would like to see a post about shrimp. (I mean, she called them prawns, but I have enough friends from the UK to know that they talk funny.) I am always happy to please my readers, especially my fanatically-devoted European contingent ("Like, we're huge in Europe right now"), so I set about making a dinner of three shrimp dishes: tempura shrimp, cocktail shrimp, and garlic butter shrimp. They were delicious.

Recently, Emily said she would like to see some more shrimp prawns, so I am doing another round. Here are some shrimp I've been eating lately: 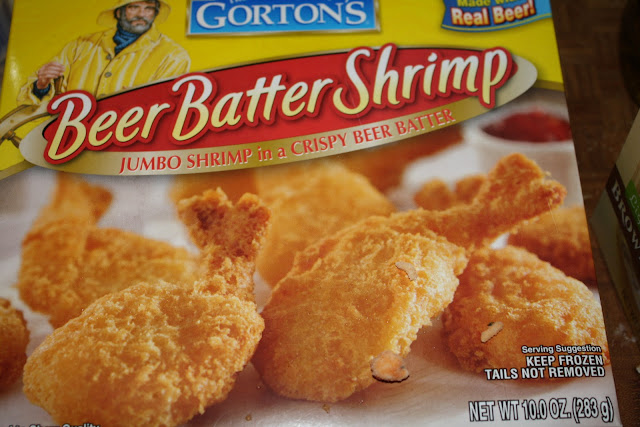 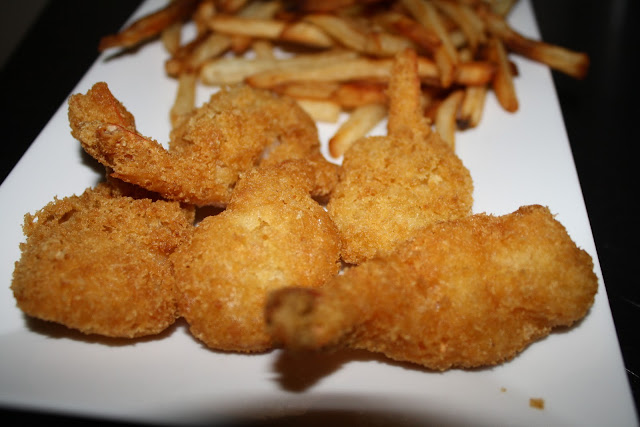 I fried up some Gorton's "beer batter shrimp." The batter was lighter than most fried shrimp, but by no means did it have the light, delicate flavor of a freshly-made beer batter. This is not a surprise; the box was frozen for who knows how long. 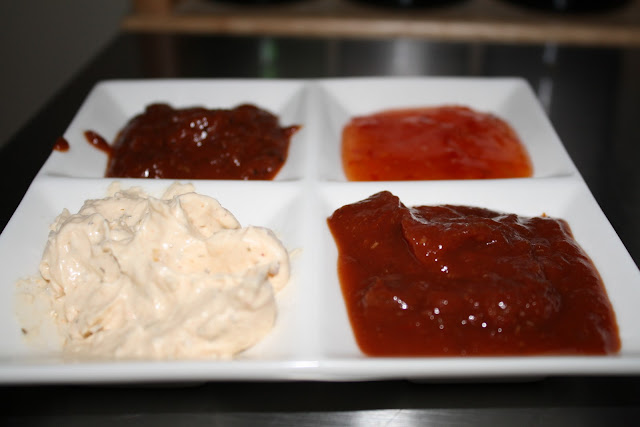 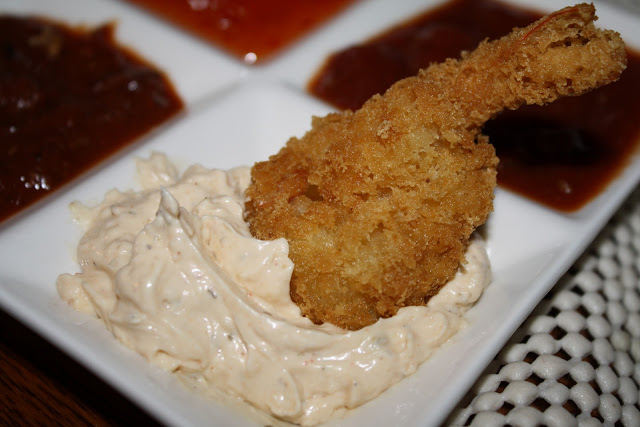 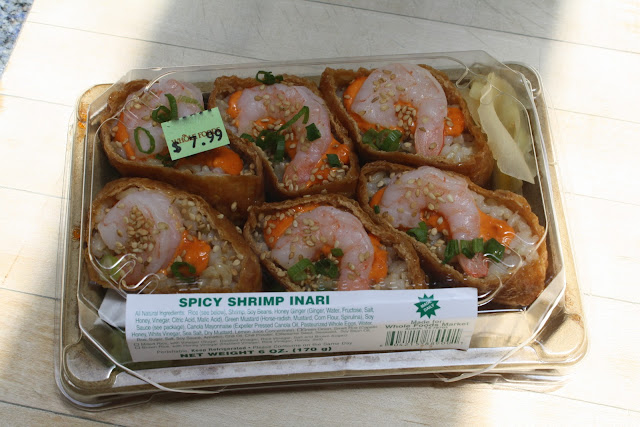 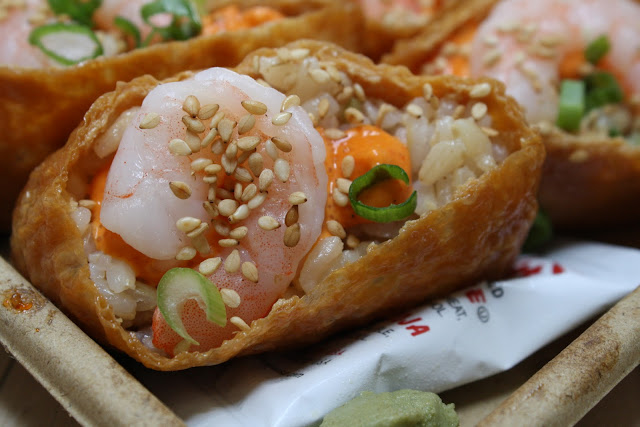 Elizabeth and I used to get Whole Foods sushi a fair amount, but we haven't done it for a long time for several reasons. Well, one mainly: it's just too inconsistent. I suppose the sushi isn't expensive when compared to restaurant prices, but by no means is it cheap. And it had gotten to the point when one out of every three or four dishes was not good. It's just not worth it anymore.

But back when we did get sushi from there, I often got the shrimp inari: a tofu pouch with shrimp, rice, and an orange sauce that I think is supposed to be spicy (but is not). 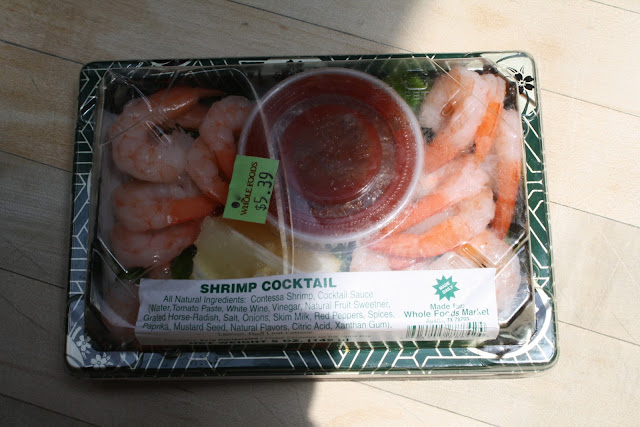 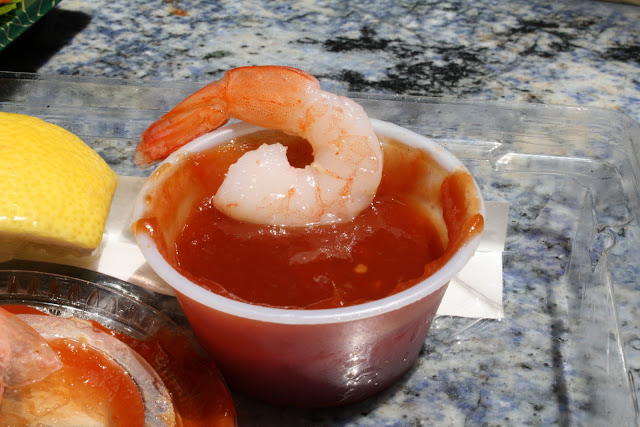 I also got the shrimp cocktail a couple of times. It's fine, just regular shrimp with a delicious, spicy cocktail sauce. For the same price you can get a bag of shrimp from Trader Joe's and defrost them (and have three times as many shrimp), but sometimes I was lazy and just didn't want to do that. 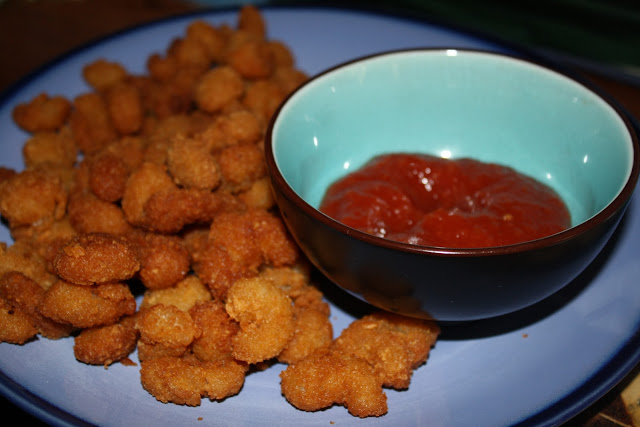 Every once in a while we both get a craving for popcorn shrimp, and one evening I fried these up and we ate them. I don't remember what brand they were, but they were tasty. 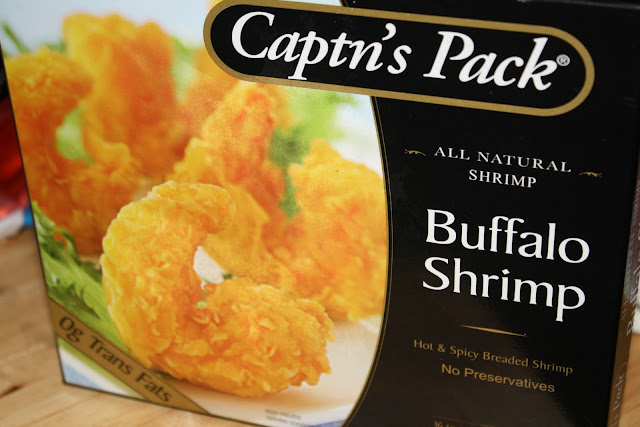 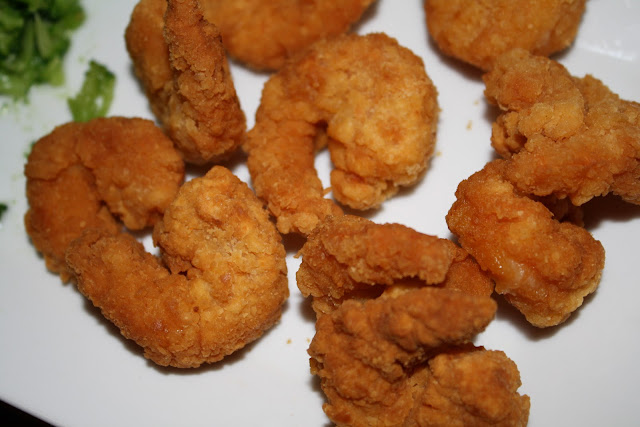 I'd seen these "Captn's Pack" shrimp at Ralph's for a while but something about them turned me off. Something made me think that these were going to be inferior shrimp dressed up in a fancy-looking package. (Maybe I've been shopping at Bristol Farms too much lately.) But on one occasion when we were shopping, we decided to give them a try.

As usual, my assumption was idiotic. These shrimp were fantastic. I pan-fried them in a few minutes and they turned out to have just the right amount of crispiness to them. The breading had a slight amount of heat (by no means "hot & spicy" as the packaged claimed, but that's no surprise) and the shrimp were meaty. 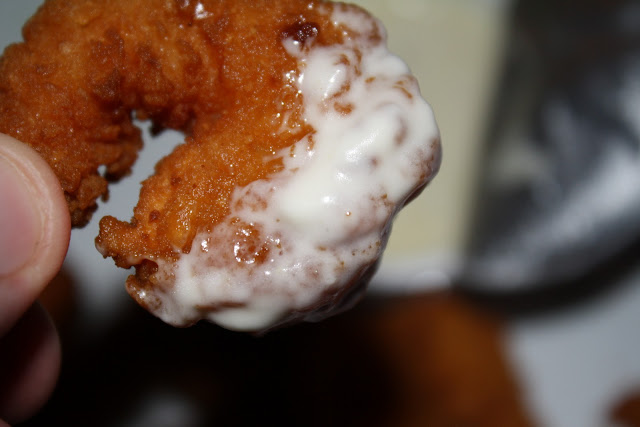 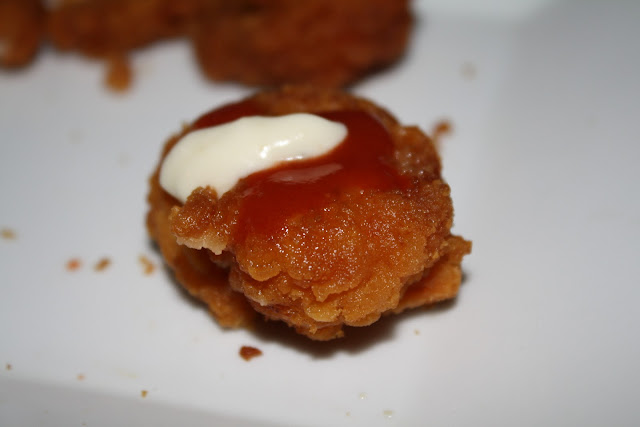 I had a small container of blue cheese sauce I'd picked up at a deli and I decided to open it to eat with these shrimp. It was a nice complement. Then I had another idea: I shook a few drops of Tabasco buffalo sauce onto a shrimp, and then one dollop of the blue cheese. It was great. Next time I get these - and there will be a next time - I will probably eat them all this way. 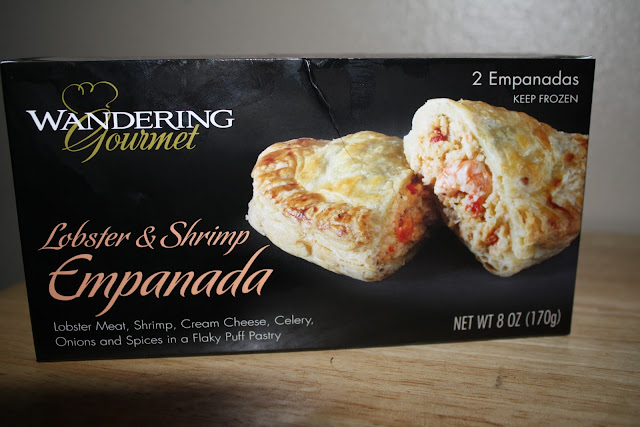 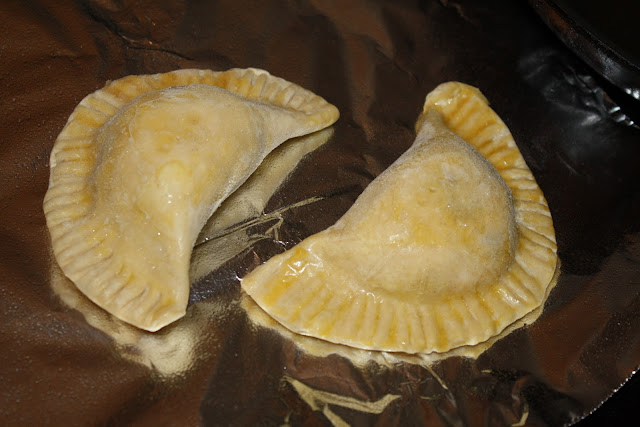 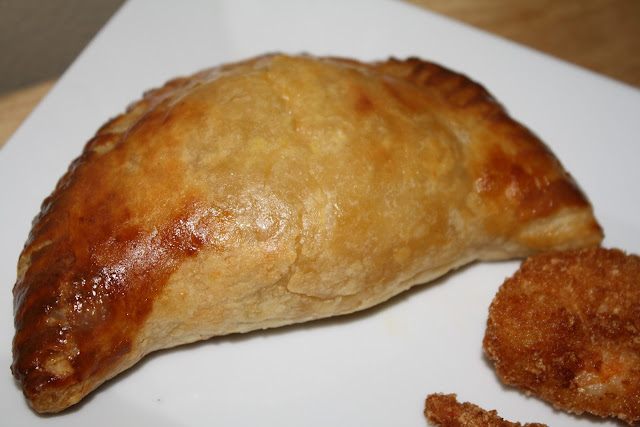 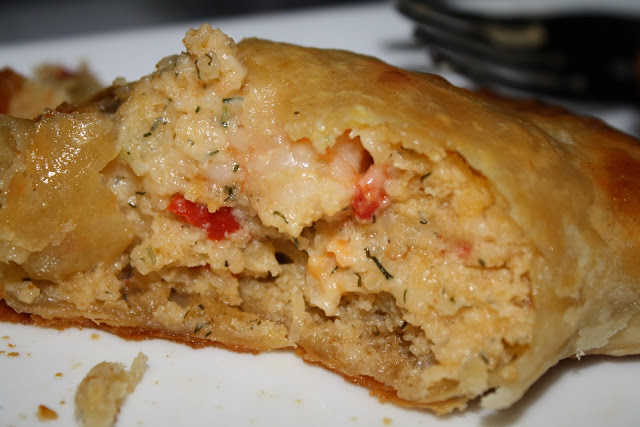 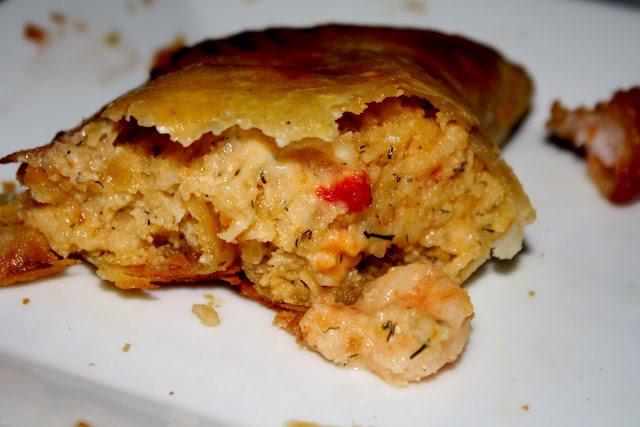 Speaking of Bristol Farms, that's where I found these. I wasn't sure how good they would be - I can't remember ever enjoying a seafood empanada - but if they were good, I figured they'd be really good. As per the instructions, I baked them in the oven for twenty minutes and let them rest for another five.

They weren't very good. The pastry shell wasn't bad, but the interior was disappointing. The package claims lobster meat, shrimp, cream cheese, celery and onions. I did not taste any of those things.

(Just this second I asked Elizabeth for an adjective to describe the insides of the empanadas. "Seafood mush," she replied. ) 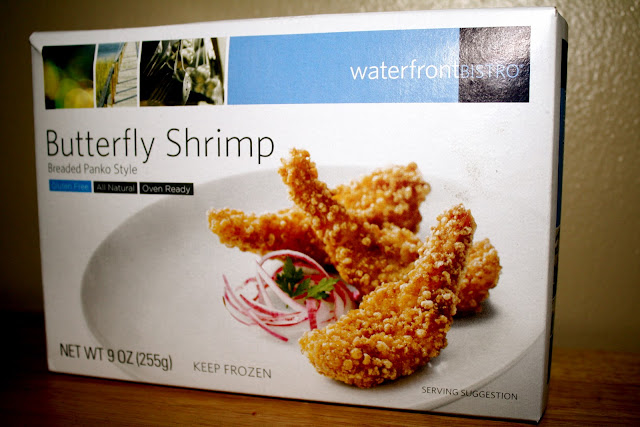 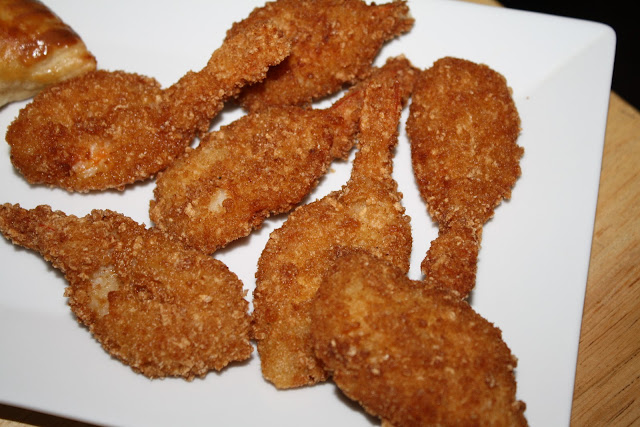 Finally we have these "Waterfront Bistro" shrimp I picked up at Vons. The panko breading looked interesting. They fried up in about three minutes. They were the worst shrimp here. There was very little meat to them and the breading tasted like a stale paste. 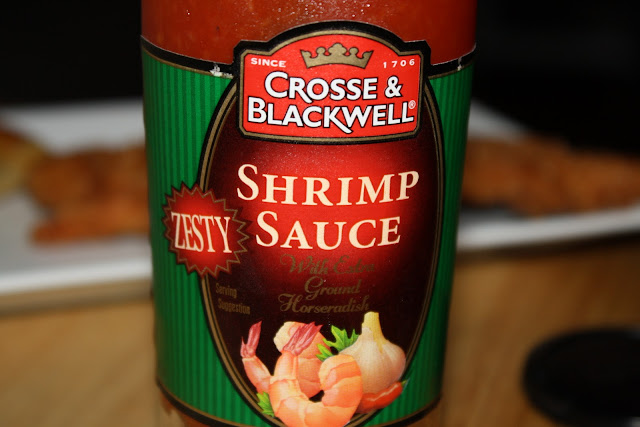 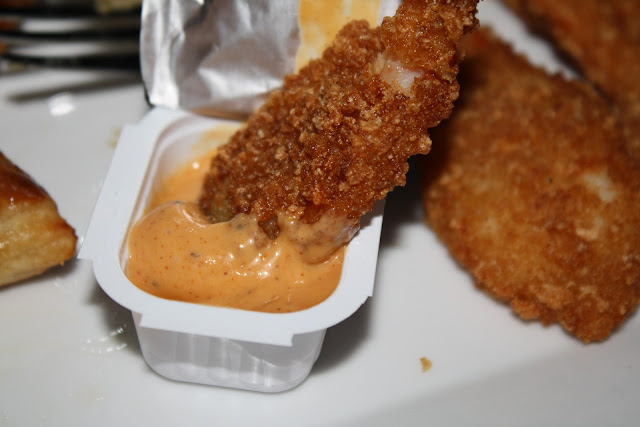 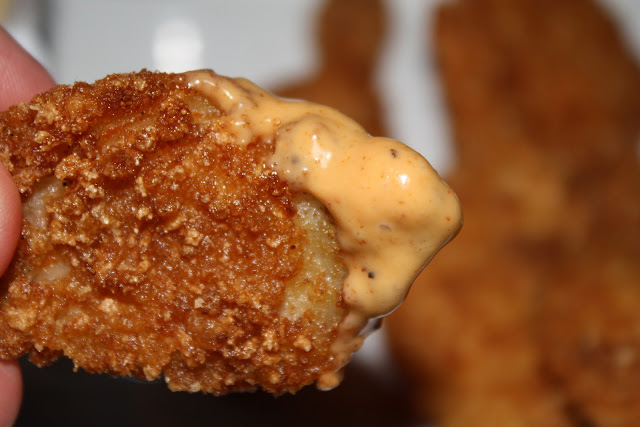 But you know what tasted even better with the shrimp? McDonald's Hot Habanero sauce. No kidding.

One of these days I'll getting around to battering and frying my own shrimp again. It's been years since I've done that, but they were always well-received.
Posted by JustinM at 10:00 AM

You're a braver soul than I. Or perhaps a bigger fan of prawns than I am - I do like them, but not enough to take the risk of eating "seafood mush". Or mayhap you're a big ol' blog whore?

Whore or not, this was such a lovely surprise for a poor tonsillitis-ridden blog reader! Thanks Justin!

PS that sushi looked DELICIOUS. Even if it wasn't.

I am a whore for much more than blogging.

so you trusted the gorton's fisherman?

i love that brand name "waterfront bistro" sounds so pretentious like an overpriced, yuppified restaurant.

My exact thought. I immediately pictured that restaurant in As Good As It Gets. (Which was supposed to be Baltimore but I think was Long Beach.) And the packaging looked sleek. But the shrimp sucked.

I loved the "Singles" reference -- that was the first DVD I ever bought.