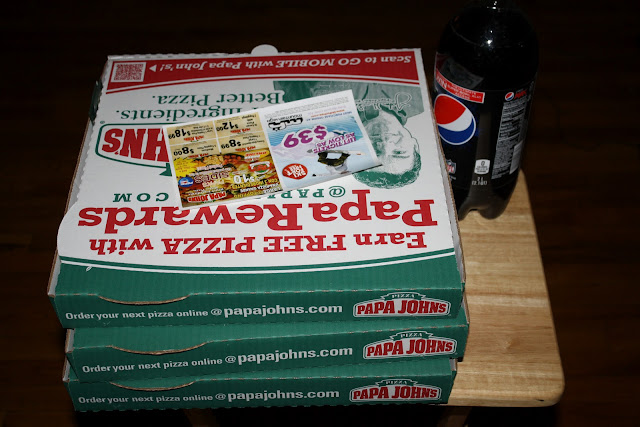 A few months back, Elizabeth and I had just finished shopping at Ralph's. After putting all the groceries in the car, Elizabeth wheeled the shopping cart a few feet away to a designated area. "There's something in this cart," she said, referring to one of the other recently abandoned carts. Long story short, it was someone's portfolio wallet.

I unzipped it to see if the guy lived nearby. (He did not.) There was some cash, several credit cards, and a checkbook. So I took the wallet back inside and gave it to the store manager. "Thank you," he told me. "That's very honest of you. Go buy yourself a lottery ticket, you've got some good karma coming your way."

So I bought several tickets. Twice a week. For months. I did not win a single thing. Not one single dollar. They say the odds of winning a prize are 1 in 40. It's not unreasonable to say I bought at least 200 tickets without winning.

What's the point of this anecdote? Well, karma may not have returned the favor in the form of a cash prize, but I did win the next-best thing*: I won two pizzas in Papa John's "Million Pizza Giveaway," as well as a pizza and a two-liter bottle of soda for a contest that I still am not clear on, something about correctly predicting the outcome of the Super Bowl coin flip. I made no such prediction, but I don't think that's the point.

Although I have only had Papa John's three times in my life,** I consider it vastly superior to Dominos or Pizza Hut. But it's still chain pizza. I just don't have any room in my life for chain pizza. Well, you know, unless it's free. The other evening when Tracie was over at my place and we started to get hungry, I suggested we use some of my pizza coupons. That sounded good to her and Elizabeth. (Murph was over, too, but he had just stopped by to borrow DVDs of The Shield and he took off before we got the pizza.)

I think the coupons were good for a large pizza with one topping, so I ordered one large cheese, one large (thin crust) chicken and banana peppers, and one large pepperoni and green pepper. The pizza was ready in 15 minutes and we drove down to pick it up.

For those two pizzas on which I got a second topping, I had to pay the difference, bringing my total for three pizzas and a bottle of soda to a whopping $2.78. 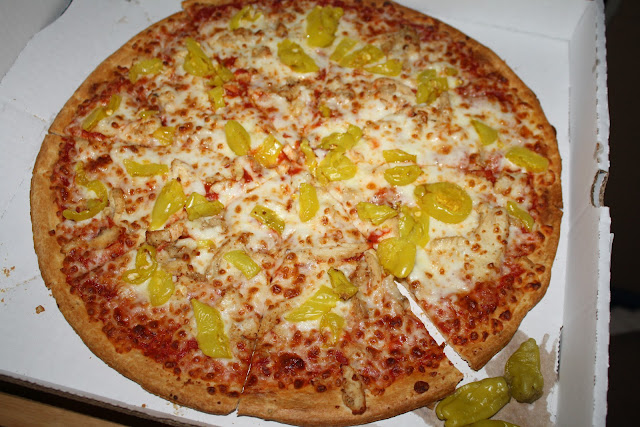 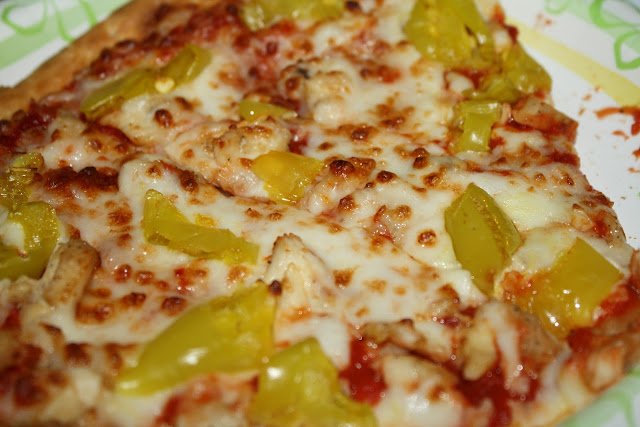 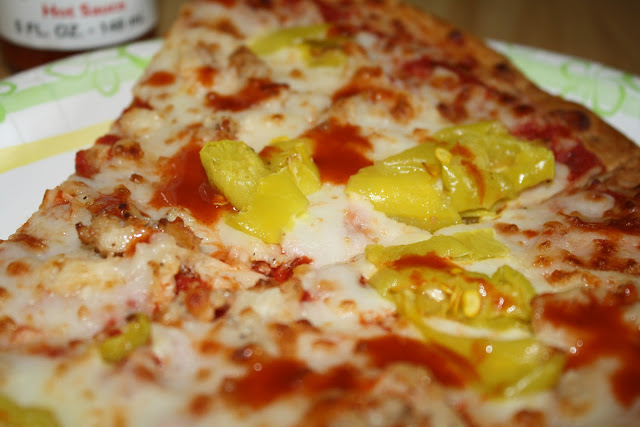 I loved the thin-crust pizza. It was as crispy as any chain pizza I have ever had, a cracker-like crust reminding me of St. Louis-style pizzas I have had in years gone by. But the toppings weren't very good. The chicken was dried-out and the peppers lacked any real flavor. I sluiced the two slices I ate of this pie with Tapatio, which helped a lot. 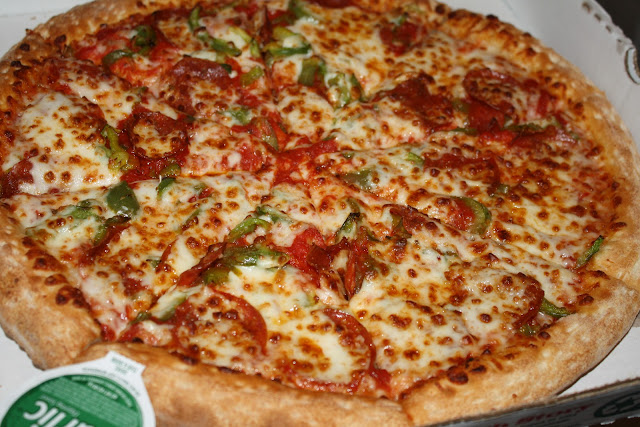 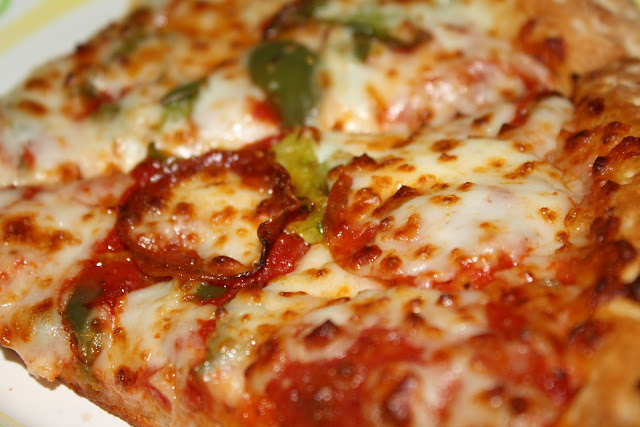 My favorite topping to add to pepperoni is green onion, a delicious flavor combination I discovered many years ago at La Fornaretta,*** which will always remain my favorite pizza I have ever had in Pasadena. But Papa John's does not offer green onion on pizza. My second-favorite pairing with pepperoni is bell pepper. So that's what I ordered on this pizza.

It was good. I mean... it's pizza, of course it's going to be good. Would I ever order one of these if I had to pay for it? I don't think so. 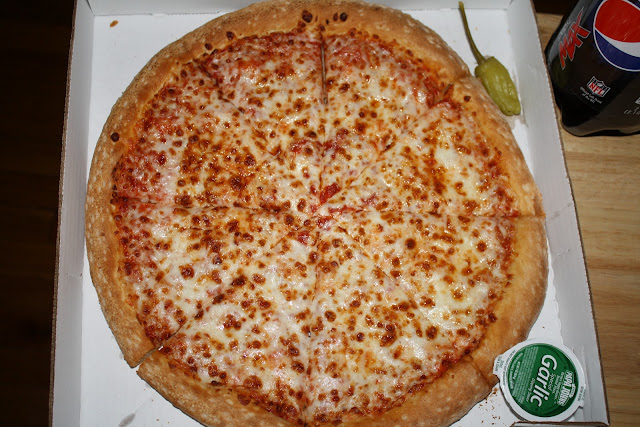 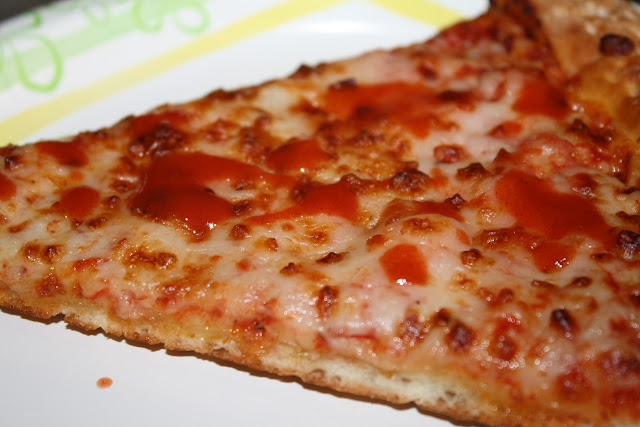 Elizabeth likes plain cheese pizza, so that's what I ordered for her. I didn't eat any of it on this evening, but the next day - there were a lot of leftovers, as you might imagine - I added some Tabasco Buffalo sauce to it. It was fine. Not bad, but my least favorite of the three pizzas. I see why they included garlic sauce**** with this pizza - it needed a lot more flavor.

It's hard to complain about three large pizzas that cost me less than three dollars. So I'm not going to. Like I said, I greatly prefer Papa John's to the other pizza chains. If any of the chains was going to offer me three free pizzas, I'm glad it was this one. But I don't think the pizza is anything special. Being that the South Pasadena Papa John's is half a block from Big Mamma's - probably my favorite pizza in the San Gabriel Valley - I don't ever see myself paying for a Papa John's pizza.

*Now that I think about it, that's probably not actually the next-best thing. The next-best thing would have been a Tuscan villa or a 1957 Corvette or bunch of gold bars or something like that.

**Actually, I've bought Papa John's three times but only eaten it twice. Once in Great Falls, Montana, after a minor league baseball game, I was walking back to the motel and picked up a Papa John's pizza. But I ended up talking on the phone for a while that night and never got around to eating the pizza. I woke up in the morning with the entire pie still on the table.

***The pizza was called the Mt. Etna and it was amazing. La Fornaretta closed many years ago and is now the reading room for the Church of Scientology's Pasadena location. It's disappointing on many levels.

****You may have noticed two containers of garlic dipping sauce in the pizza boxes. Elizabeth loves that stuff and I accidentally threw one of them away. I may have seen her angrier at some point in the last few years, but I don't remember when.

I had enough Papa John's in middle school to last me a lifetime. I do agree that it is one of the better chain pizzas out there, but I think I prefer Papa Murphy's and maybe Davannis.

I actually like the taste of Round Table more than any of them, but Round Table's pizzas have gotten ridiculously expensive over the years. (Their lunch buffet is still a good deal, though.)

I admit I love PJ. I don't think its great but when I'm lazy it hits the spot and they always have tons of coupons.

i heart papa j's over the other chains.

I respect both of those opinions. Michelle, that's why I always have a Trader Joe's frozen pizza in the freezer - they cost less than five bucks and are quite tasty.

Papa John's holds a special place in my heart. During college the local PJ's had a deal -- 5 pizzas for $30. We'd walk up and down the hall trying to find 10 guys who wanted to pay $3 for half a pizza, or 6 for a full. The garlic sauce and free peppers were always fought over, and these two items have remained in my mind as a reward for ordering from Papa John's. It is hard for me to think truly objectively about this chain.

Objectivity in food is overrated. I WANT to hear stories like this.

For example: Shakey's pizza is pretty bad but I will always think fondly of it: going there with my grandmothers and playing videogames, AYSO and YMCA postseason parties, going there with my friends in high school when we had no money but 6 bucks could get you the all-you-can-eat buffet.

WORST PIZZA ON THE PLANET!!!!

That seems like a silly thing to say... but you wrote in all CAPS, so it must be true...

Yoo hoo, Portland OR lurker here. Justin (and Elizabeth!), your musings are entirely engrossing. If you've noticed traffic patterns combing through your archives on successive Saturday afternoons from my neck of the woods, well, that's me. Just wanted to drop in and thank you for all the great writing and thought provoking topics. I love food, I love writing -- so when they come together to delight, I'm in. Thank you again from a very loyal reader :>

Well, thanks for the comments. Glad you enjoy it.

Never, ever, EVER throw away the garlic dipping sauce.