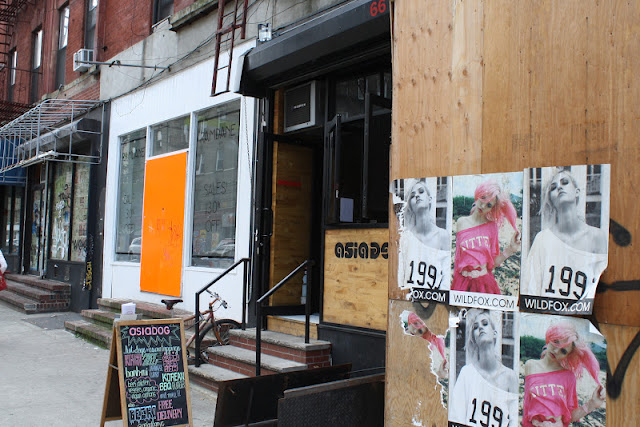 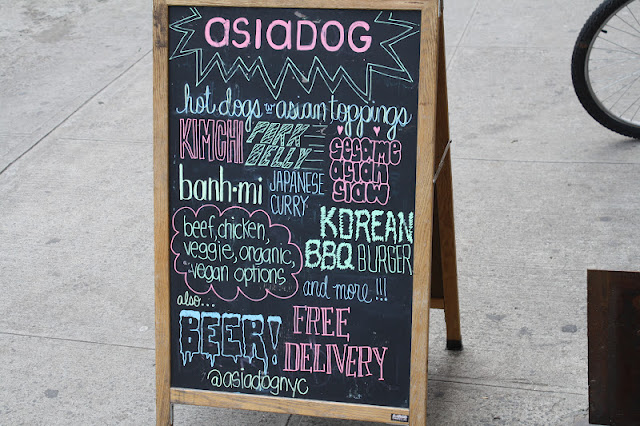 I was meeting Elizabeth at her work for something, it's three miles from us and normally I take the subway, but it was a really nice day so I decided to walk. Every once in a while I do this, always varying my route so that I can see new things. On this particular day I wandered through Chinatown and Little Italy, and stumbled across Asia Dog. The sign on the sidewalk was concise: "hot dogs w/ asian toppings." I can always go for a hot dog, and I definitely wanted a drink, so I popped in.

The room is tiny; I tried to take a couple photos but it was impossible to do without people taking up the majority of the shot. 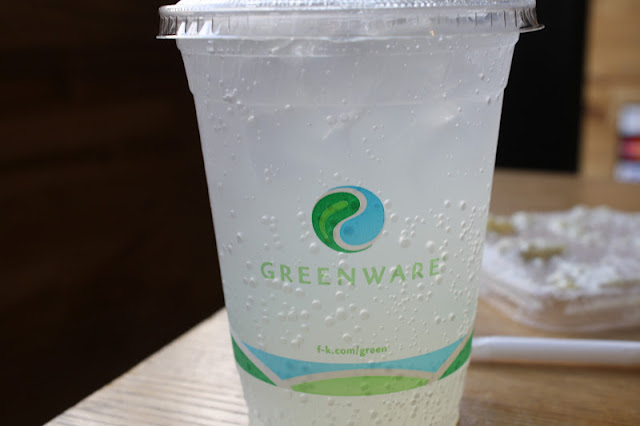 My limeade soda was refreshing, and as tart with lime as any drink I have ever tried. The menu claims it's freshly-squeezed, which is undoubtedly true. 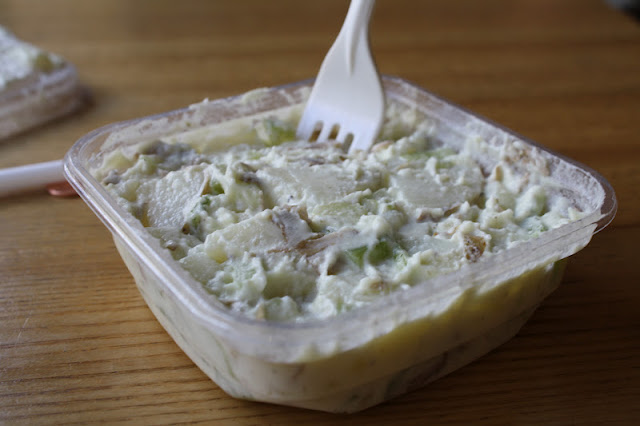 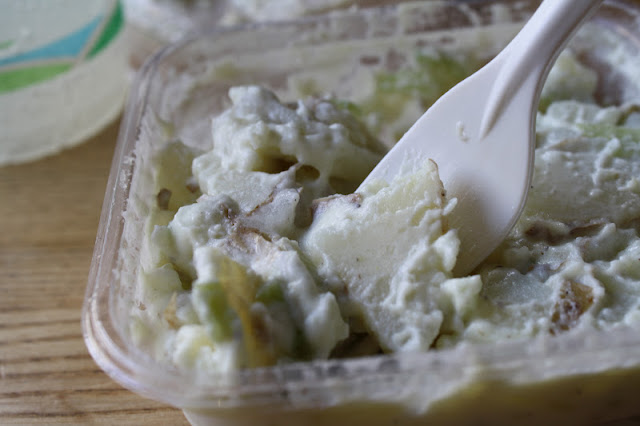 When I see something on the menu called "wasabi potato salad," I purchase it 100% of the time. Okay, this was the first time I have ever seen that; my statement is still true. Cold potato salad, sparingly dressed (as I prefer it) and containing the unmistakable kick of wasabi. I was expecting a cringe-inducing blast of wasabi, but it was much more muted. At first I was disappointed (I kind of wanted to cringe) but with each bite I appreciated the subtlety of the flavors a little more. I couldn't finish the container, but I ate more than I would have if the potato salad had been over-the-top with wasabi flavor. 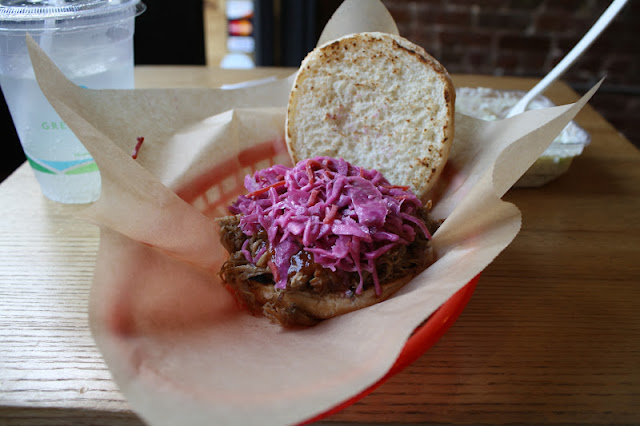 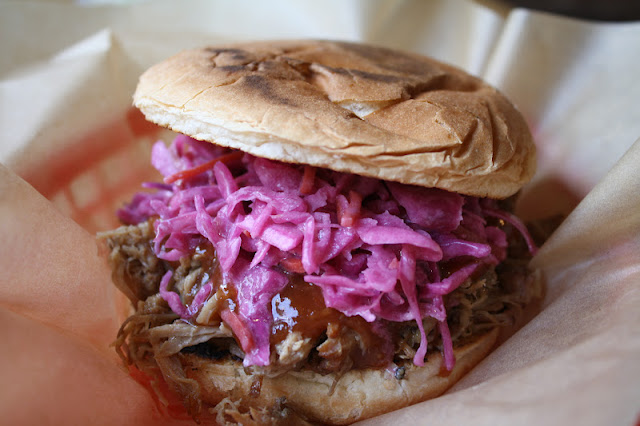 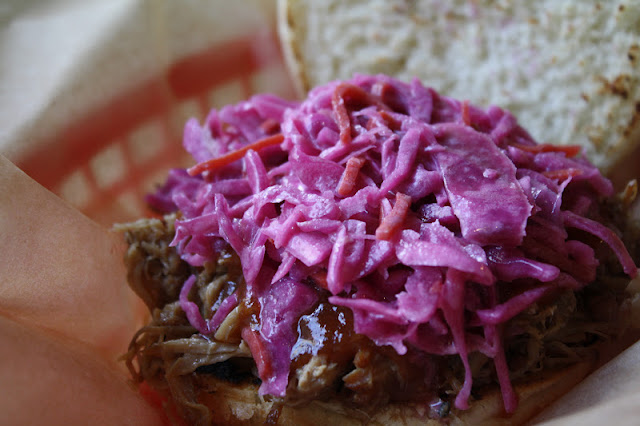 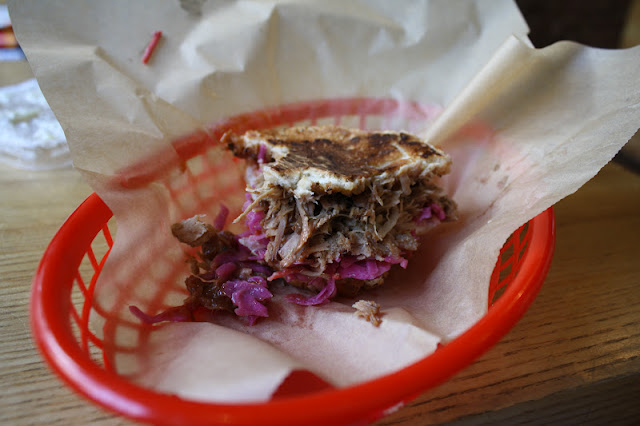 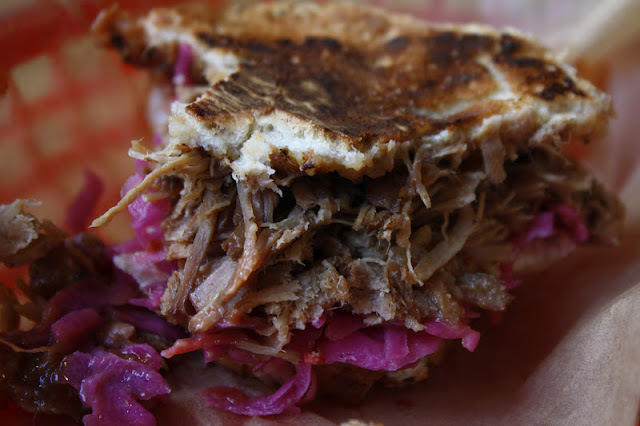 I decided to get the pulled pork sandwich. It's topped with your choice of kimchi or Asian slaw. It was a tough choice for me but I opted for the latter. It was delicious. Really tender and juicy pork, a ginger barbecue sauce that complemented the swine perfectly, and the vinegary red cabbage slaw. (I'm not sure what makes the slaw "Asian," but it was great.)

I'd planned to stop in just for a hot dog and ended up not even ordering one. But that's okay, I will absolutely be back. I want to try the "Vinh" (a banh mi-style hot dog with pork pate and pickles), but I'll probably end up ordering the Wangding (pork belly, cucumber and scallions) simply because it sounds fun to say.
Posted by JustinM at 9:52 AM

I wondered what had happened to the Pulled Porker.

Now i see you left the city, valley, county, state, and nearly the nation - and I find you now eating asian hot dogs!

Look 4ward to your new food finds and hope the move all works out.