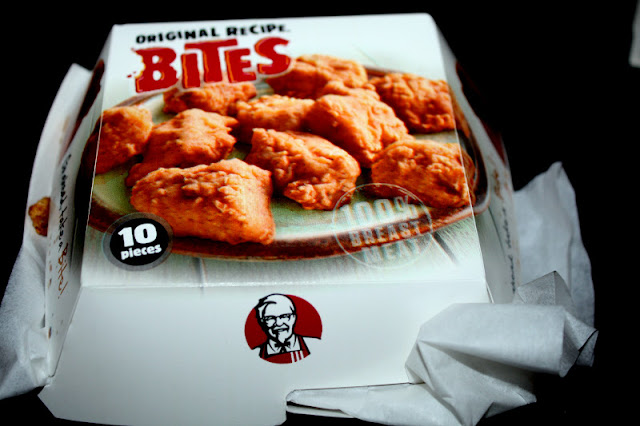 May 24, 2010. It was the birthday of two people I like very much: Bob Dylan and Elizabeth's sister, Dawn. The Angels lost 0-6 to the Blue Jays, becoming the last team in the majors to get shut out. It was the final time I would ever see Jack Bauer do something new.

And it was the last time I ate at KFC.

There was a time when I actually liked KFC - hell, I'd been eating it since it was called Kentucky Fried Chicken. Every day people still stumble upon this blog because of something I wrote about Chicken Littles, and there isn't a month that goes by that I do not receive an email from someone asking, pleading with me to disclose the location where they serve Chicken Littles. (One was in Riverside, the other Arcadia; the former has not had them in years and the latter closed down a year ago.)

But other than those Chicken Littles, there just hasn't been anything I've really liked from KFC. Not their popcorn chicken, nor their sandwiches or wraps or anything else. So after that evening, when I tried KFC's "Extra-Crispy Strips" and found them underwhelming, I never went back. Needs for fast food chicken were always well-served by Popeyes (back when I used to go there) and especially Church's. I didn't really dislike KFC, I just didn't see any need to return.

I went to the closest KFC to me. You've seen the combination KFC/Pizza Huts? Depressing places. This was a triple combination: KFC, Pizza Hut and Nathan's Famous. There were only five people in line ahead of me but it still took 20 minutes to place my order. Would it have been less time if the guy in line ahead of me had not been so preoccupied arranging a drug deal on his cell phone? Yes, I believe it would have.

(The girl working the counter was very sweet, though, and after I placed my order for 10 bites, she included a few extra. "I gave you more since you had to wait so long," she said.)

I had hoped that the bites would be fried to order, but was not surprised when she simply turned around and lifted a bunch of bites off of a warming rack. I asked what kind of sauce they had - I have no idea what sauces KFC is offering these days - and was disappointed to hear that my choices were ranch, barbecue and honey-mustard. I selected the last of those. 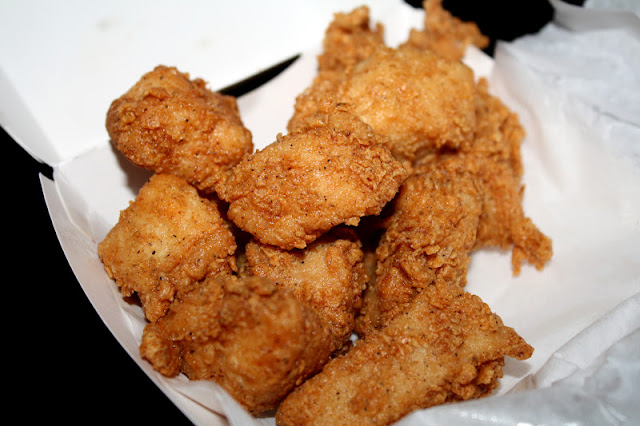 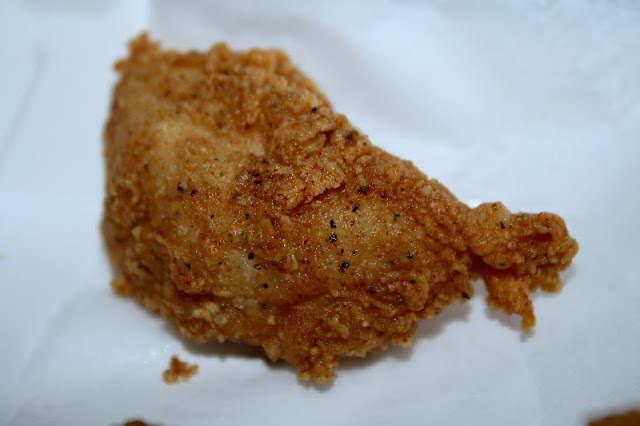 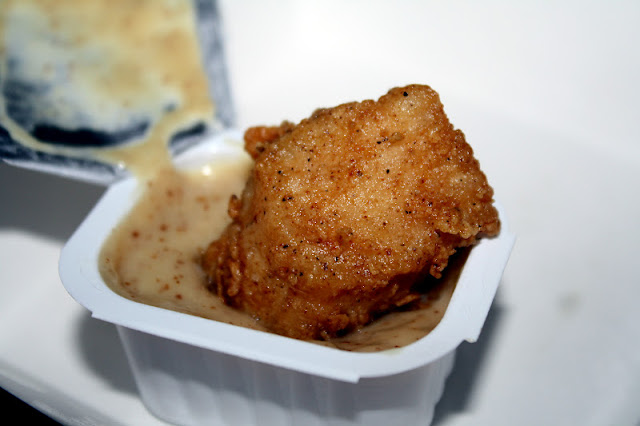 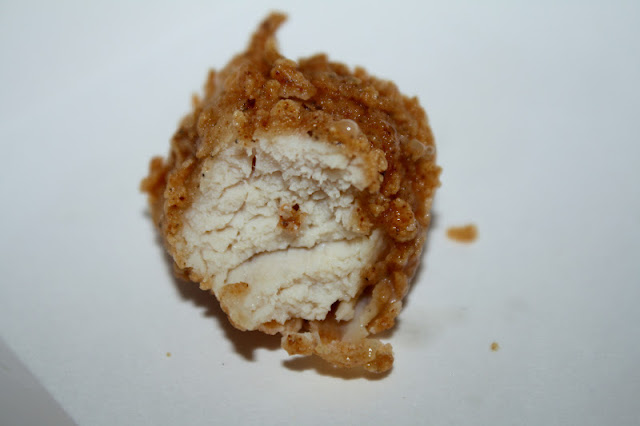 Despite having been sitting on the warming rack, the chicken was still a little moist, it was not completely dried-out. (Would it have been better if KFC had made the effort to cook them to order? Definitely. But making an effort and KFC don't belong in the same sentence.) The breading was the mostly-insipid combination of flavors that I have come to expect from KFC's Original Recipe, but remember what I said earlier and take my opinion with a grain of salt, or 1100 milligrams of sodium. The breast meat was good, though, and reminded me a little of the old Kentucky Fried Chicken nuggets from my childhood.

But overall I did not find anything special about these bites. I like McDonald's McBites more, to say nothing of the great boneless wings at Church's (or the vastly superior nuggets at Chick-fil-A, if I'm ever near one again). And I've had more than one person tell me that I should try the chicken bites at Rally's/Checker's.

It was a better effort than I was expecting from KFC, but not enough to make me return.
Posted by JustinM at 10:00 AM

That looks so greasy. And not in a "Duh - it's fast food of course it's greasy" way.

Our KFC's here are a KFC/Long John Silver combo. So fried chicken, and fried fish. And they both come out tasting the same. Horrid.

Did they change it at all? I remember liking it in the past, but I didn't really care for it this time. I definitely prefer McDonald's.

I agree with the greasy comment but it also looks rubbery.

Your definately not missing anything not going to Long John Silver's -- Captain D's is much better, if that tells you anything.

At the lake I go to (Carlyle Lake, IL) they used to have a combo Taco Bell/KFC that had an all you can eat KFC buffet. KFC's gone way downhill, but I still think I could have gotten into a lot of trouble at that buffet.

Anyway, even though I've pretty much sworn off KFC, I'd still like to try their pot pie sometime (with a side of potato wedges).

My friend Zach and I went to lunch one time down near his place in San Diego and he drove me to KFC afterwards because he wanted me to see what a KFC buffet looks like. It did not look good. Even if I hadn't just had a massive lunch (I believe we had gone to Phil's BBQ but I'm not 100% sure) I wouldn't have eaten there.

I think the chicken bites taste nasty. I purchased some today and they must of been sitting around the store since last Friday because the topping and chicken were rubbery. Also I noticed that the original receipe chicken has not been up to par lately. I think KFC is going down hill