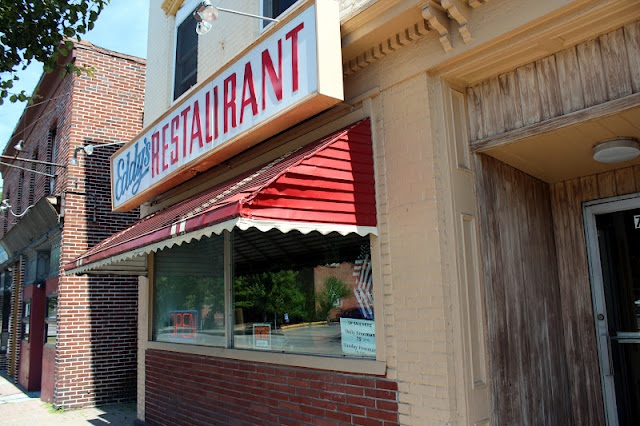 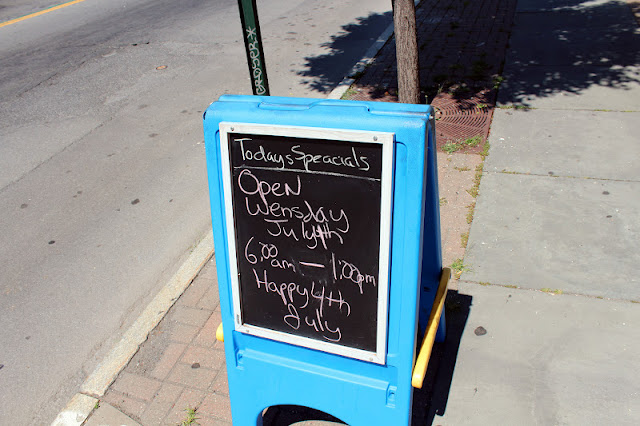 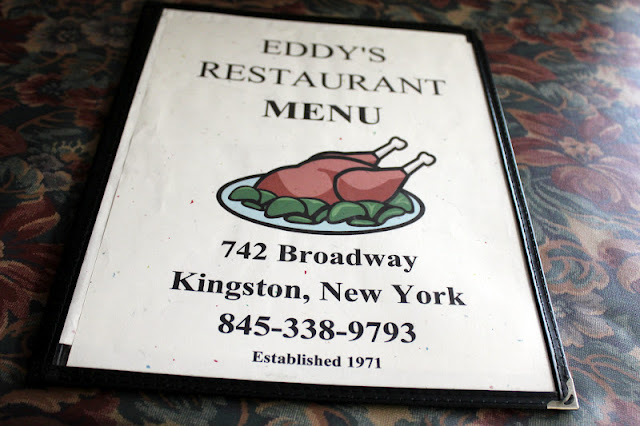 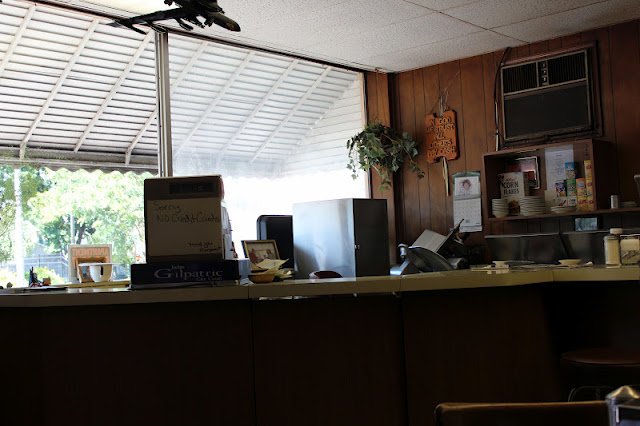 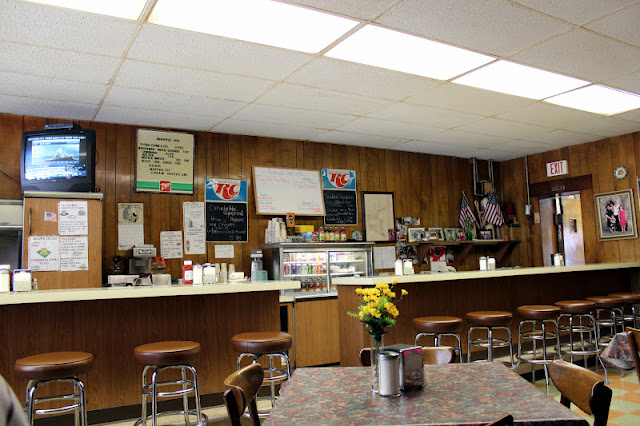 If you were reading two years ago (judging by the numbers, only about one-quarter of you were), you would have read about Eddy's Restaurant in Kingston. It's my favorite diner at which I have ever eaten and, of the 955 posts I have written prior to this one, that write-up is one of my top 10 favorite.

So, one sunny morning a couple of weeks ago when we were in Kingston getting ready to do a bunch of sightseeing during the day, I wanted to get Eddy's for breakfast. Everyone else was just fine with that. We got there after the breakfast rush was over. Eddy's closes in the early afternoon most days, so you can definitely get lunch, but it seems like breakfast is the time when everyone goes.

We took a seat against the wall next to hundreds of photos of Eddy's customers that have been pinned up over the years. A couple of minutes later we noticed my mom was right next to a photo of Elizabeth's late grandmother. As I mentioned two years ago, you cannot buy this kind of atmosphere, not even with an unlimited decorating budget. It is impossible to fake. People have been coming to Eddy's and loving it for decades and even though they may have shuffled off this mortal coil, their memories still exist in places like this. 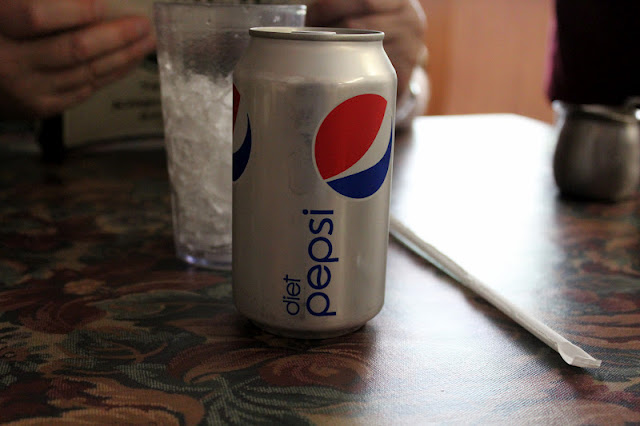 It was already quite hot in the morning so I wasn't in a coffee mood and had myself a Diet Pepsi. 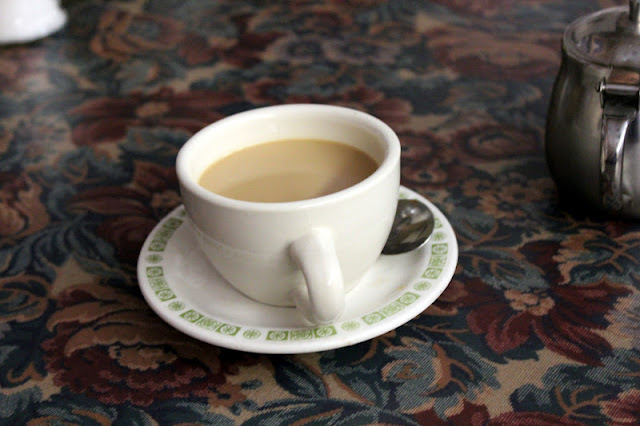 Elizabeth, on the other hand, had coffee. 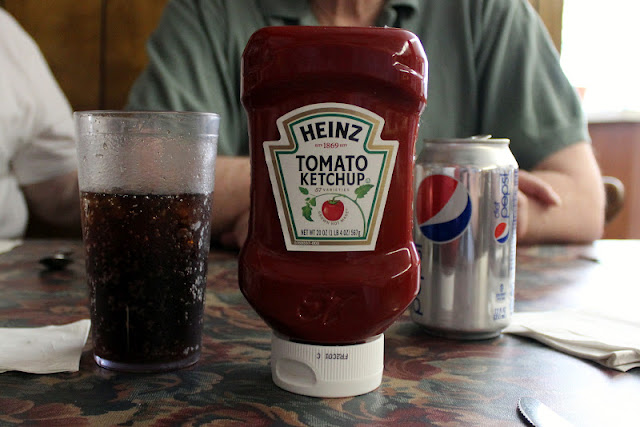 I'm not going to call this a pet peeve, and not even a real annoyance. This is just a service announcement, because most people with whom I dine don't seem aware of the following fact: these Heinz ketchup bottles are supposed to be kept this way, with the cap on the bottom. This way, you don't have to shake the bottle of ketchup and you don't have that watery stuff coming out with each squeeze. Only ketchup comes out the bottom when you squeeze.

Now, maybe I am underestimating how many people are aware of the fact; maybe most people already know this and it just so happens that the circles I travel in are made up of people who are unsophisticated about ketchup packaging. But 9 out of every 10 times I am with someone and one of the "top down" (Heinz's term for it) bottles of ketchup is used, the person sets it down on the table inverted so that the cap is on top and the label is upside down. 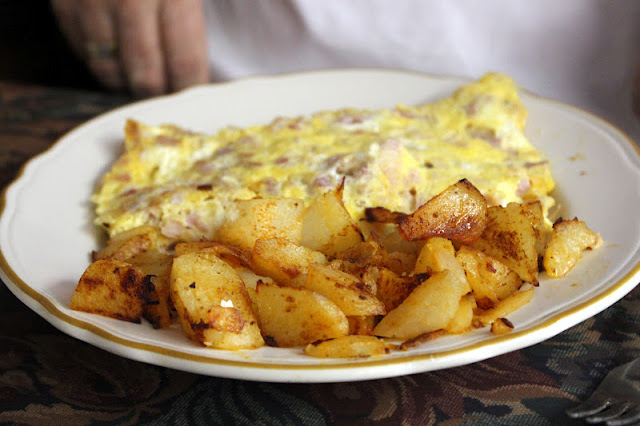 My mom got an omelet with ham and cheese and Eddy's home fries. It looked great and she really liked it. 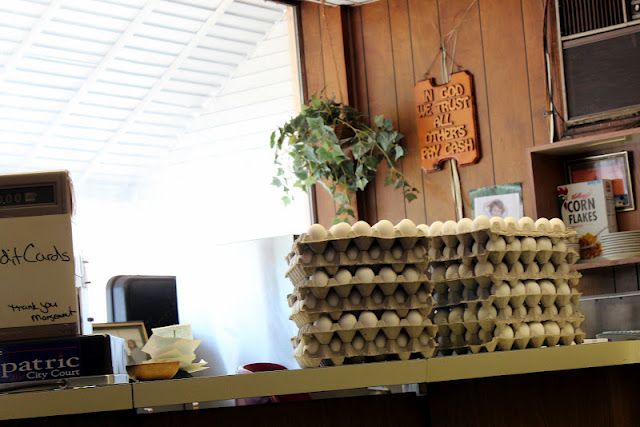 I guess Eddy's needed more eggs, because a guy made a delivery and started piling them on the counter right next to the cash register. My God I love this place. 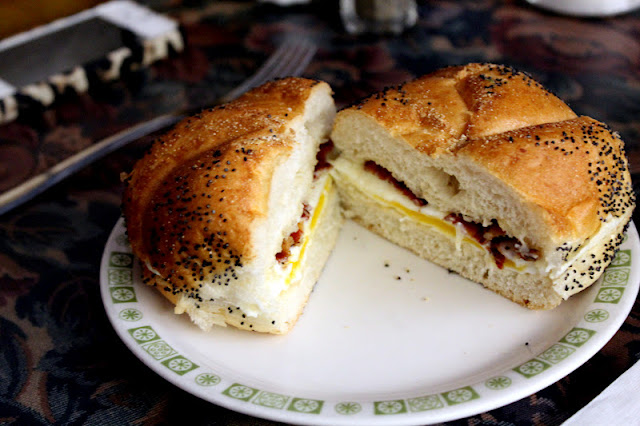 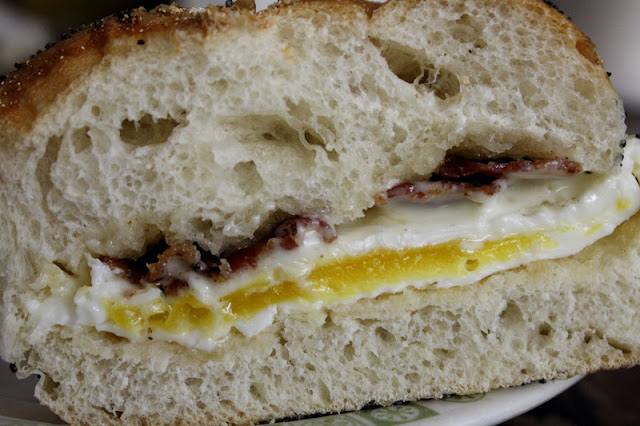 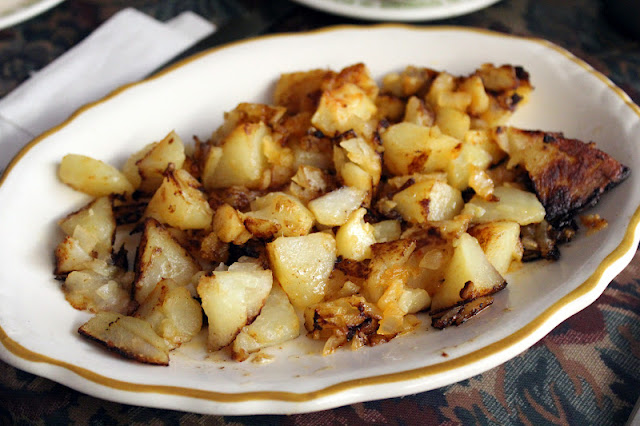 She also got her own plate of home fries, because Eddy's home fries are also awesome. She couldn't finish the plate and even though I was full from my own plate, which you are about to see, I still finished them. It would have been a shame to waste them. 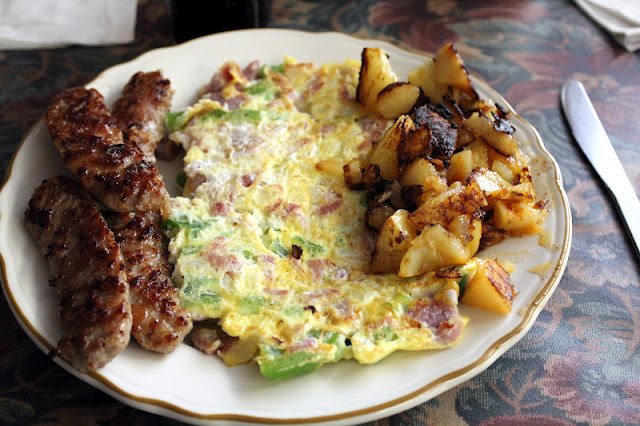 I had myself an omelet with ham (I ordered corned beef but found out a few minutes later that they had run out and was offered ham) and onions and peppers. It was wonderful, just freshly chopped veggies and ham suspended in scrambled eggs. 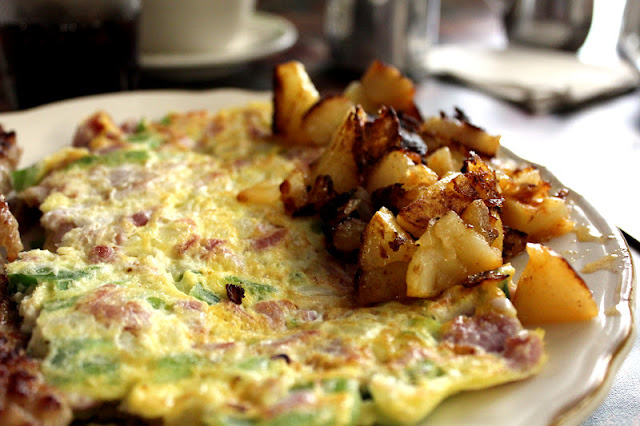 As I have written, the home fries are great. 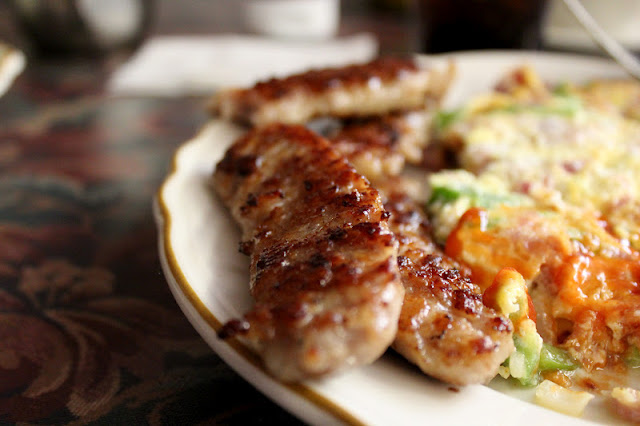 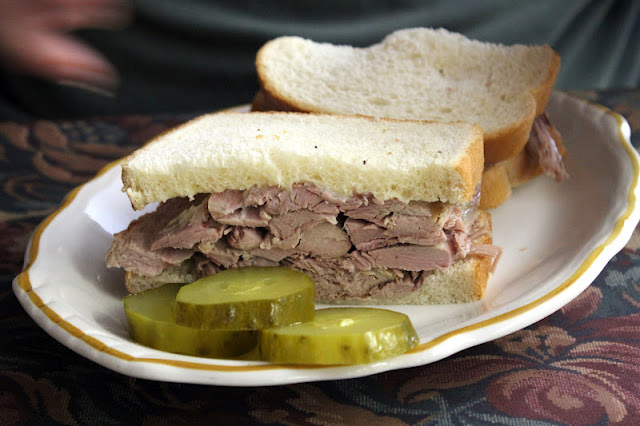 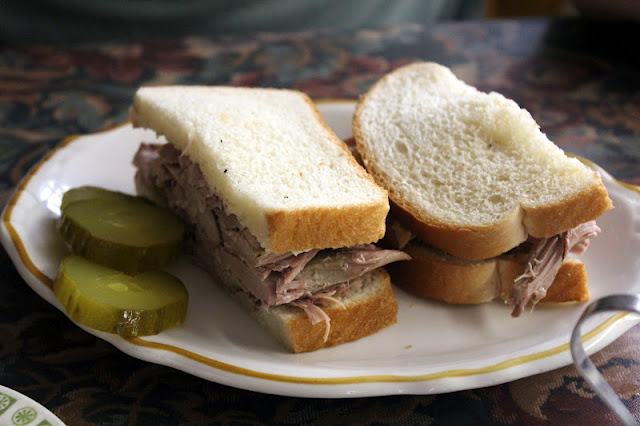 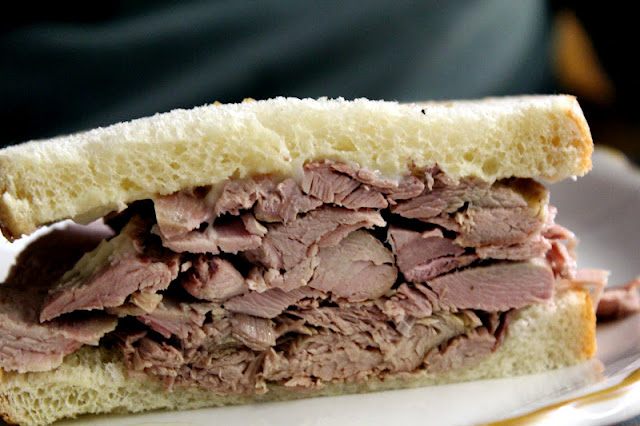 My dad asked for a dark meat turkey sandwich. It wasn't on the menu as such but if you are lucky enough to have an Eddy's of your own, you know it doesn't matter: if they have the ingredients they'll make it for you and then tell you what you owe.

We all had our food while my dad sat without his for quite a while, at least ten minutes. I guess the cook was busy. Just as I was about to get up and say something, I saw the cook lift a giant bird up onto the counter and start carving it. I knew it was going to be fresh and good. 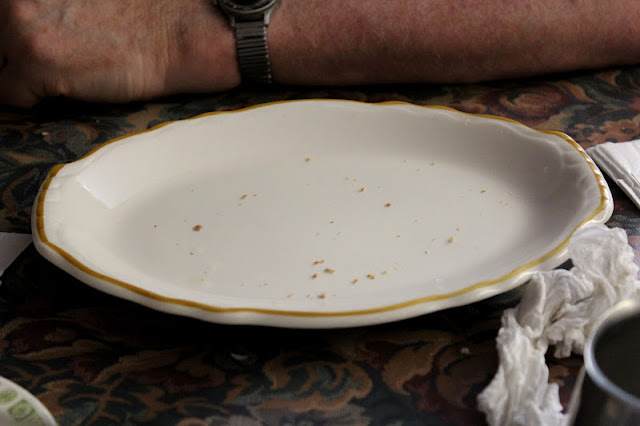 Ha! I understand about the ketchup. That is the way I liked to keep mine until my boyfriend was expecting to shake it and made a terrible ketchup mess... Good diners are hard to find and that one sounds like it has everything!

your dad really does like his food plain, eh?

When it comes to meat, absolutely.

Loving the misspell of "Wensday" on the A-board.
Even the plates are fabulous. Classic diner.

I know that the ketchup bottle is supposed to be cap-down, but I do not trust the cap or myself enough to risk the mess so turn it upside down.

Sorry for the book, but I live in Kingston and have yet to try this place. They always seem to be closed when I want to go, or I don't have cash on me at that particular time. Definitely seems like my kind of place though, and it looks good. Also, I don't know if you've been, but another local place to try is Joe Beez. It's a sub shop that's down the street, right by the high school. The original location is on South Manor Ave. That place is a local favorite and they have literally any kind of sub/wrap whatever that you could want. I definitely recommend that place for you next time you are in the area, and I'm also curious to hear your opinion on it. Cheers!

Hi Jack. No need to apologize. You are welcome to write ten times that much when it's useful information. I have not been to nor even heard of Joe Beez. I'm not sure when my next Kingston trip will be - I want to try and get there and see the fall colors - but I will try to check that place out.