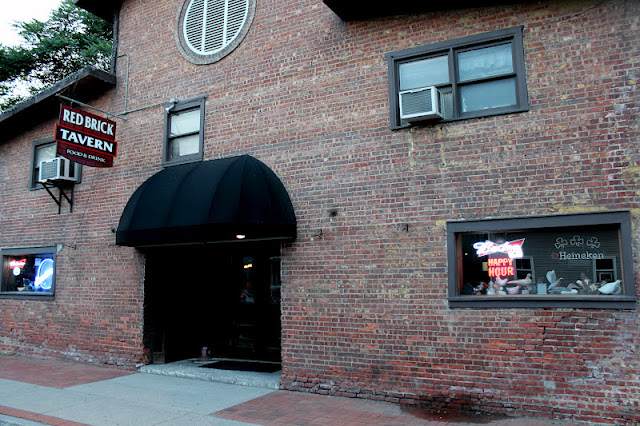 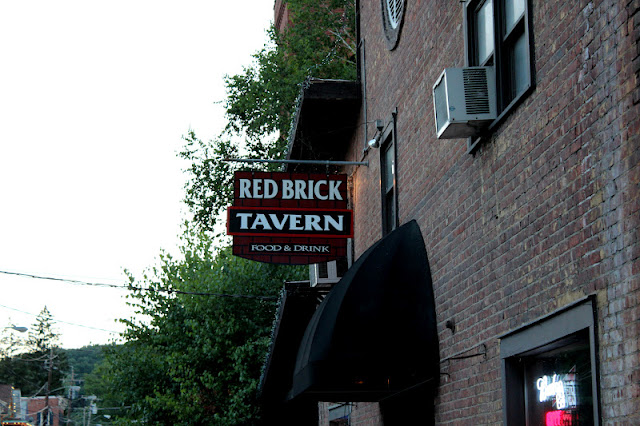 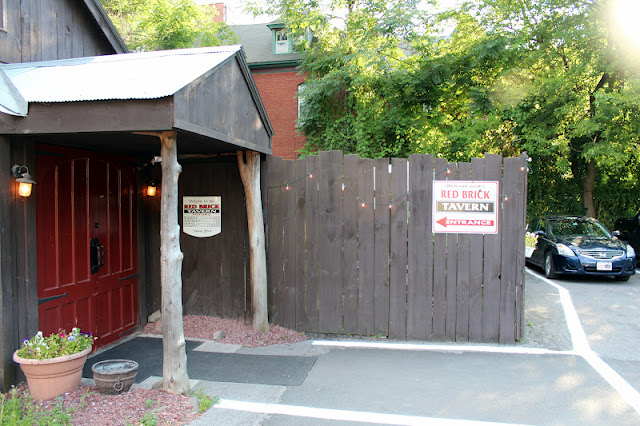 A couple of years ago, when Elizabeth and I were in the Hudson Valley just prior to her sister's wedding, we had one night all to ourselves. There was a dinner to which we were invited, but the bride and groom were not going to be there and our presence was not required. So we thought about going out for dinner just the two of us.

Elizabeth's dad strongly - I'm talking very strongly - recommended we try the Red Brick Tavern in Rosendale. "I'm not a world traveler," he said, "but it's one of my top three restaurants." He went on and on about the dishes he'd tried and seen others try.

In the end we decided not to go anywhere. It was one of those soft summer nights, warm with only a touch of humidity, and it dawned on us that we could just grill hot dogs on the patio, drink cold beer and watch the fireflies before getting in the hot tub. Not surprisingly, I had and still have no regrets about that decision. But Rick told us we'd missed out on a great restaurant.

And over the last two years he has continued to tell us, no fewer than ten times, how great Red Brick Tavern is. It almost became something of a game between me and Elizabeth to see who could bait him into bringing it up. Sometimes he caught on and laughed, sometimes he did not. Regardless, each time he had the same exuberance in describing Red Brick as if he was telling us for the first time.

It was something of perfect storm of circumstances that brought us all to dinner at Red Brick Tavern on a night in early July - though perhaps the word "perfect" is an odd choice, being that the circumstances involved two deaths. Elizabeth's parents have lived in Florida for the last four years, but her maternal grandmother passed away in March and so Elizabeth's mom is in the Hudson Valley preparing to sell the house. Elizabeth's dad, I have mentioned, has been in Broolyn for the last few months tending to his uncle, George, who passed away last month. He is still here finishing up a few things.

So when my parents visited two weeks ago, we were all - me and my parents, Elizabeth and her parents - able to spend a few days together in the Hudson Valley. We cooked outdoors two of the nights we were there but one night we decided to go out to dinner and so there was no question where we would go: the Red Brick Tavern. I certainly wanted to try the place, but there was no way, in my mind, it could possibly live up to the hype Rick had perpetuated over the last two years. No amount of fire or freshness can challenge what a man will store up in his ghostly heart. 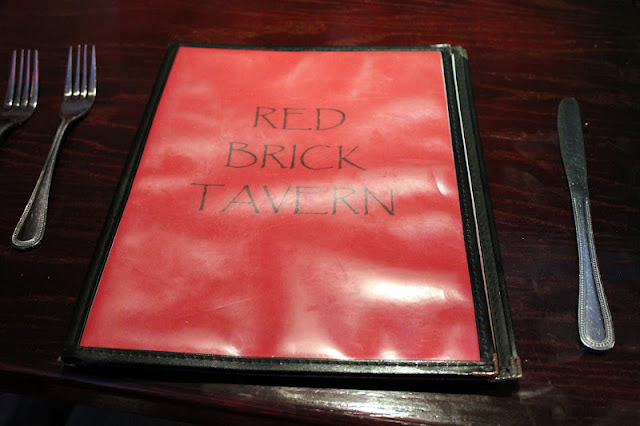 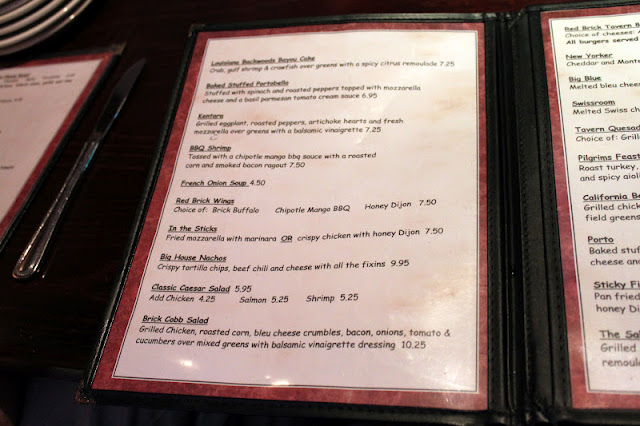 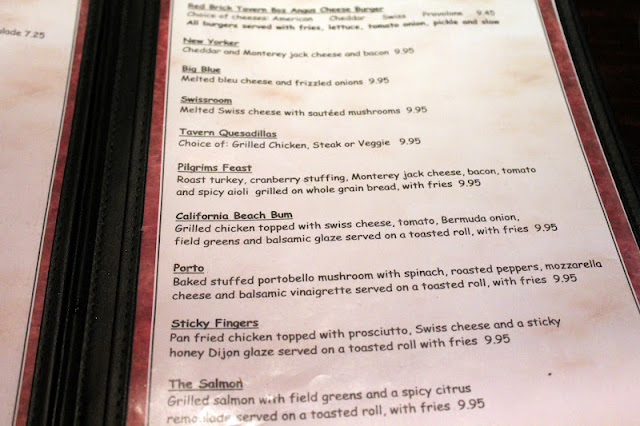 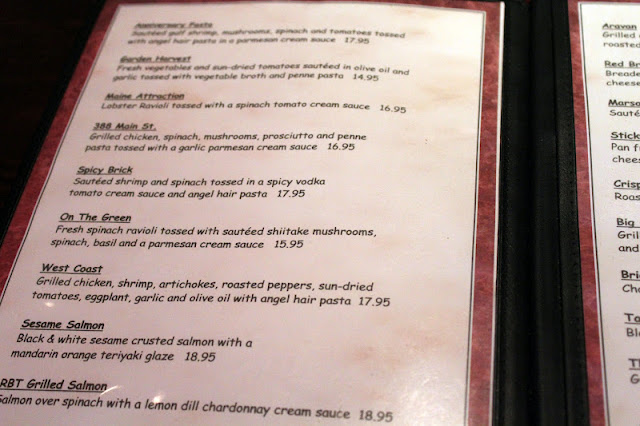 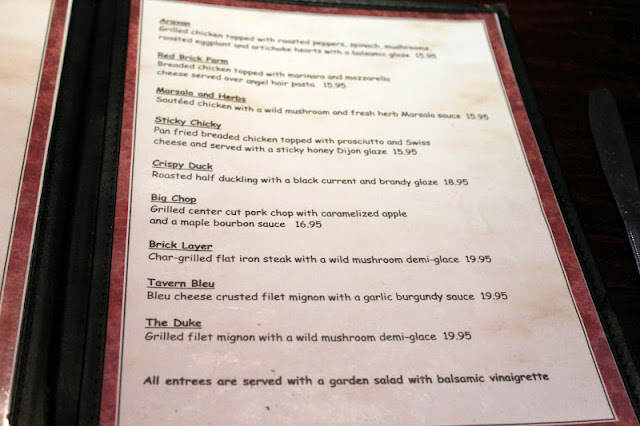 The menu - I had looked at it at least three times over the years - seemed rather pedestrian to me. This is a moronic thing to say, especially given my oft-repeated maxim of my dad's: "Never make assumptions; they're always wrong." But nothing on the menu jumped out at me; for some reason I got the impression that none of the food would be fresh, it would just be jarred sauces and vegetables thrown together like something on Kitchen Nightmares. As I mentioned, I'm moronic sometimes.

Before we went to dinner I figured I'd probably get a burger, and after studying the menu a little further, that's what I decided on. 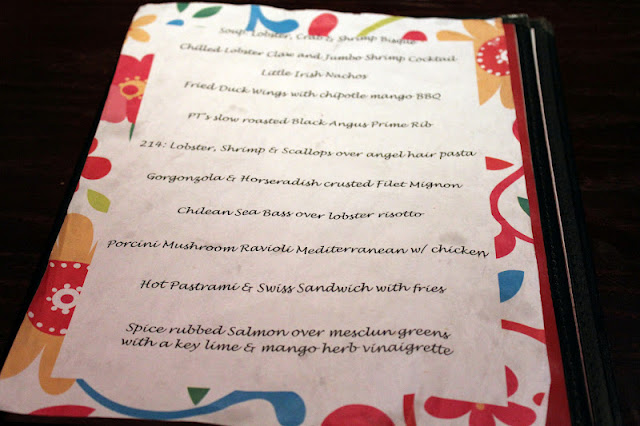 But then I saw the specials and two things jumped out at me: Chilean Sea Bass over lobster risotto, and the Hot Pastrami & Swiss sandwich. (Disparate items? Perhaps. But both sounded good.) When Elizabeth said that she would be getting the fish, I decided to get myself the sandwich. 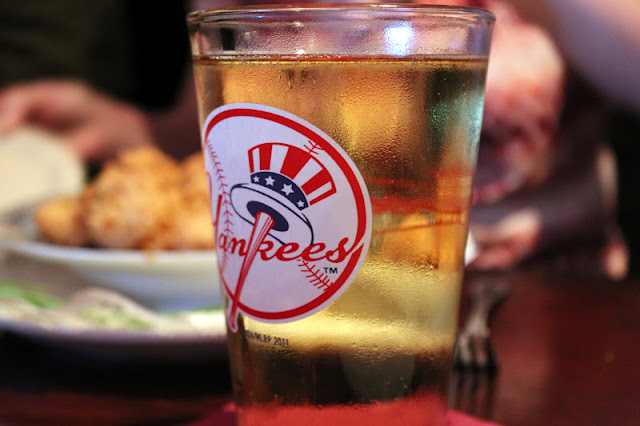 Elizabeth's mom was drinking cold beer and that sounded good to me, but I didn't want to be served a Yankees glass. 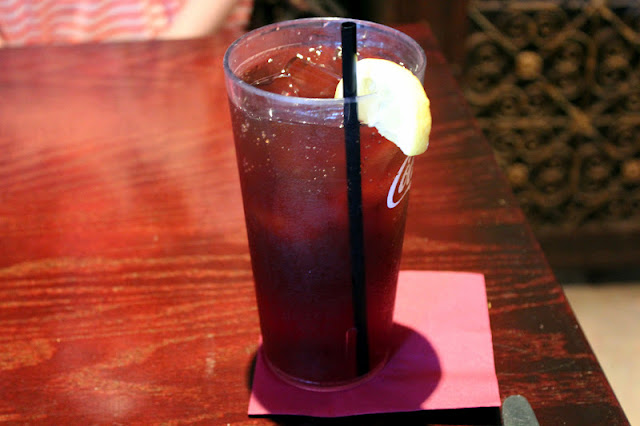 So I had an iced tea. 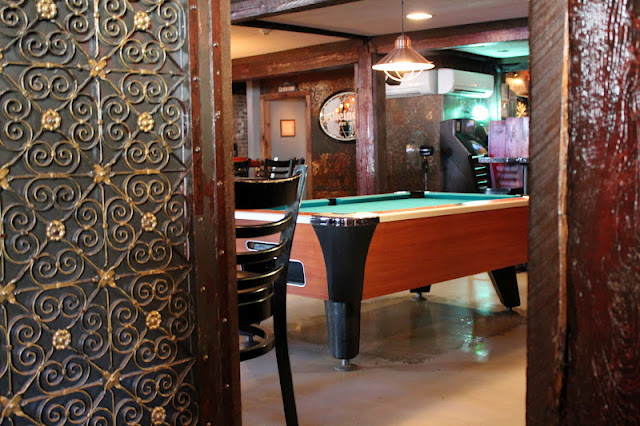 I was curious how Rick had discovered the Red Brick Tavern. When I saw the pool table in the bar area it made a little more sense, and then he revealed that he had come here with his billiards team many years ago. 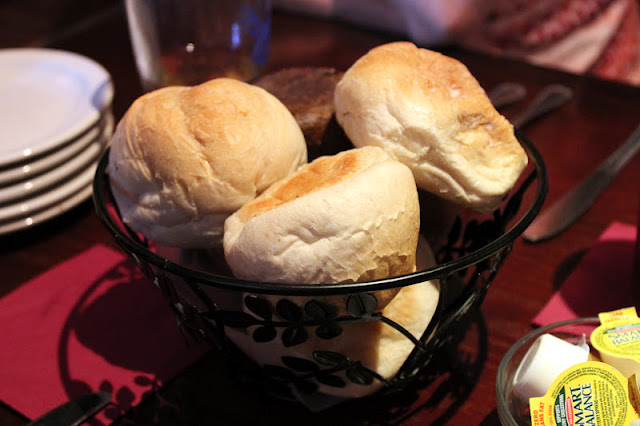 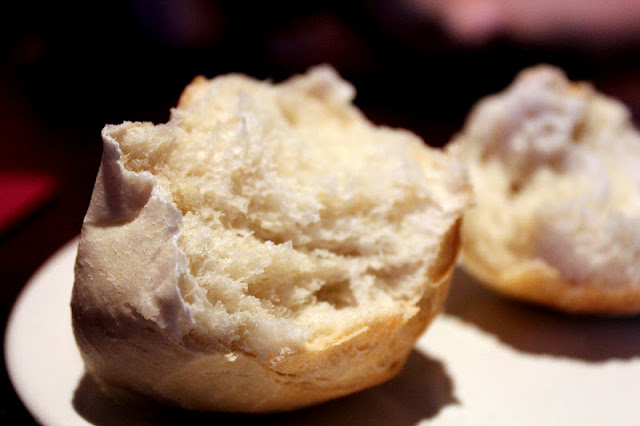 The rolls were good but I only had half of one. I was hungry but I didn't want to fill up before we got to the good stuff. 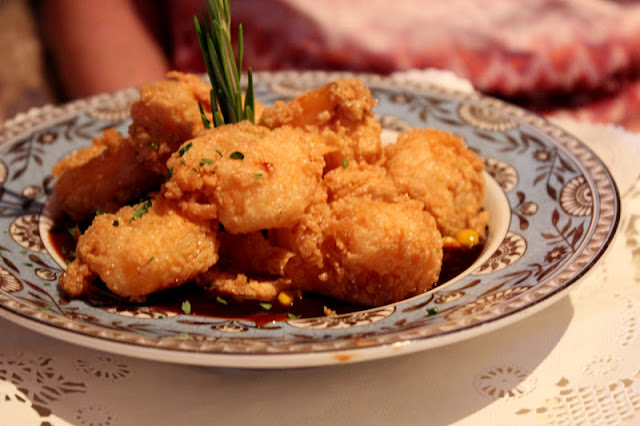 Rick started with the BBQ Shrimp appetizer: fried shrimp with a chipotle-mango salsa, roasted corn and smoked bacon. He encouraged us all to try it. So I did . 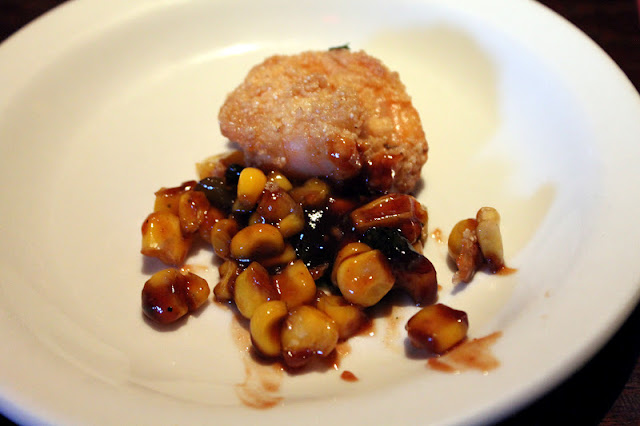 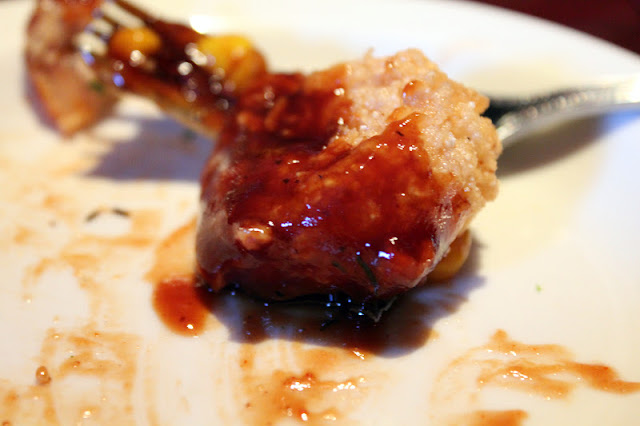 It was wonderful. Some of the better popcorn shrimp I have had this year, and a sauce that was surprisingly spicy. The slight note of bacon was just noticeable. I could have eaten an entire plate of this myself, quite easily. I appreciated the fact that the fried shrimp were served on top of the salsa, not slathered with it, so that each person could control the amount he or she wanted. A simple gesture that required no additional effort. I wish more places did this. (At a Japanese restaurant the other day I had a wonderful tempura langostine that was unfortunately drenched in a sauce that tasted like nothing but mayonnaise. Red Brick Tavern's approach would have been much preferred.) 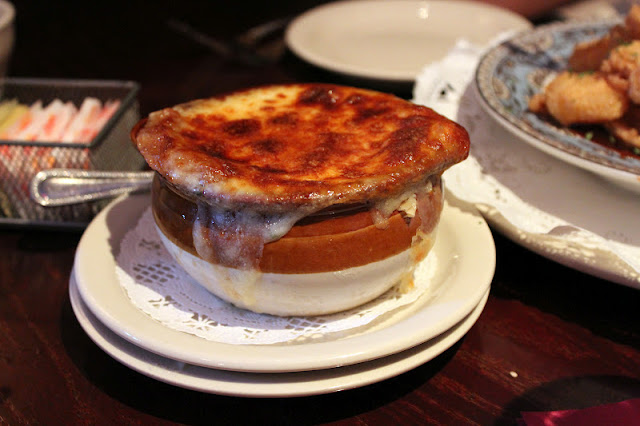 Rick also had the French Onion soup, which he loved as well. He explained that those two appetizers were the only things he needed to order, since he knew he would be able to share food with his wife and daughter. Which was correct. 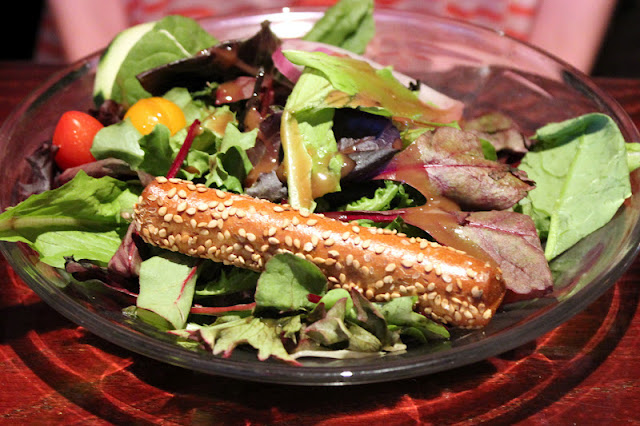 Several people received salads and I took a couple of bites of Elizabeth's. It was very good. 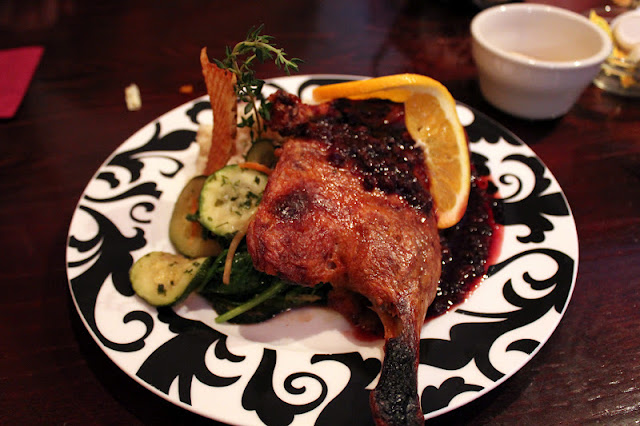 My mom and Elizabeth's mom both ordered the crispy duck, with a black currant and brandy glaze. Both of them enjoyed their plates very much, but I did not try any. 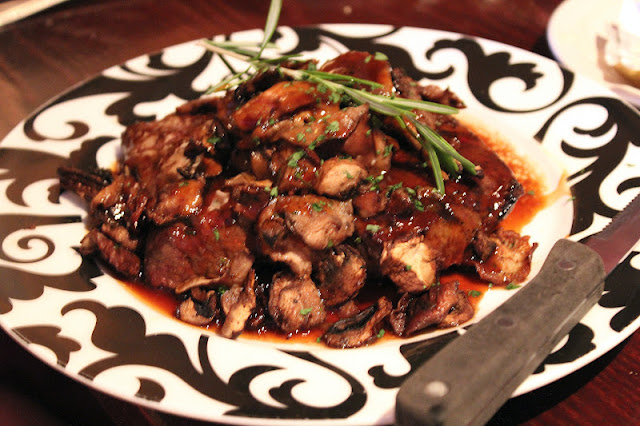 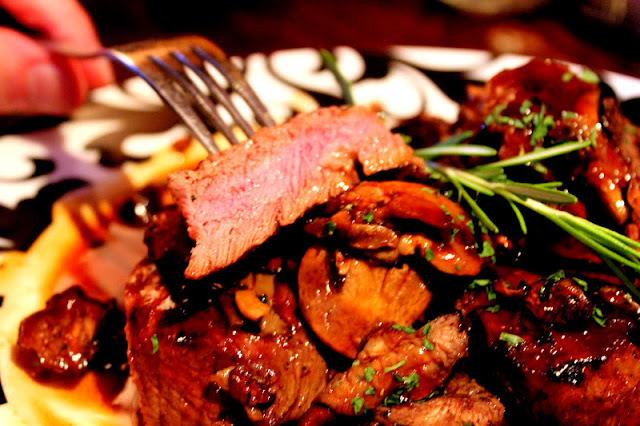 My dad had the flat iron steak with a wild mushroom demi-glace. He was sitting next to me and I took several pictures of his food. I thought they came out well; they did not. And it's a shame that I don't have better pictures here, because this steak was awesome. Perfectly cooked, juicy, tender, and I even liked the wild mushrooms. There was a very generous amount of steak (my dad couldn't finish it) so we all got to try, and everyone loved it. 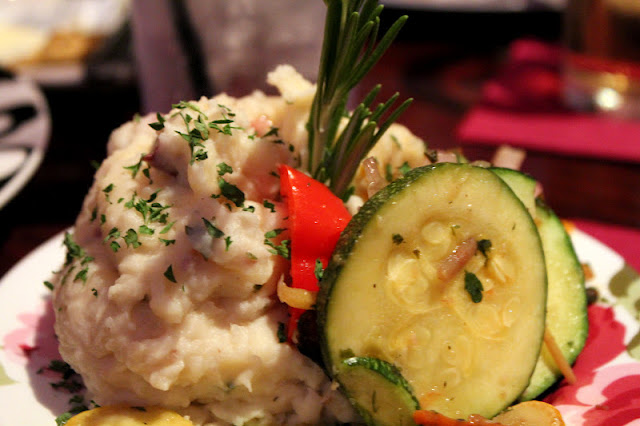 Included with my dad's steak was a towering heap of garlic-herb mashed potatoes. I will keep this simple: I have never enjoyed mashed potatoes more in my entire life. 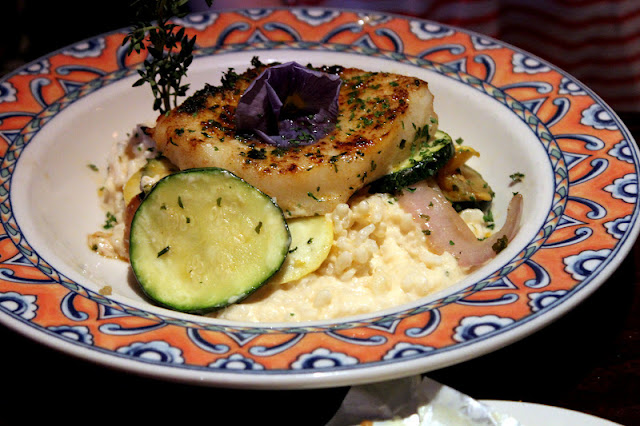 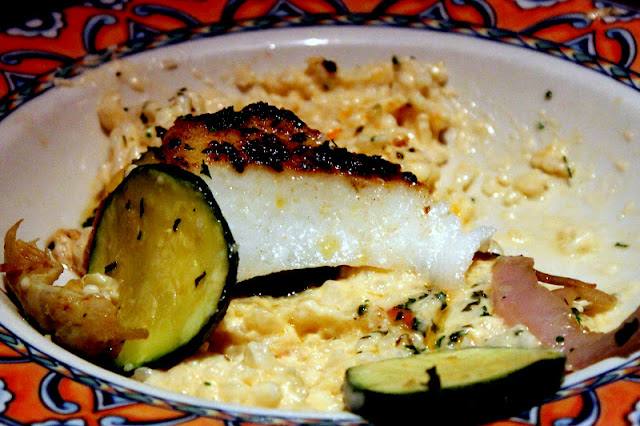 Elizabeth's sea bass. I'm always a little reluctant to describe a dish as perfect. Perfect does not mean "really good" or even "the best I've ever had." It means free of faults, as good as it can possibly be. How many things do we ever eat in life that ever meet those qualifications? But this fish was perfect. I cannot think of a single way that it could be improved.

Not only am I not an expert on risotto, I don't really know much about it. I am not sure what standards one used to judge risotto. That being said, the lobster risotto was the best risotto I have ever had. Nothing else comes close. 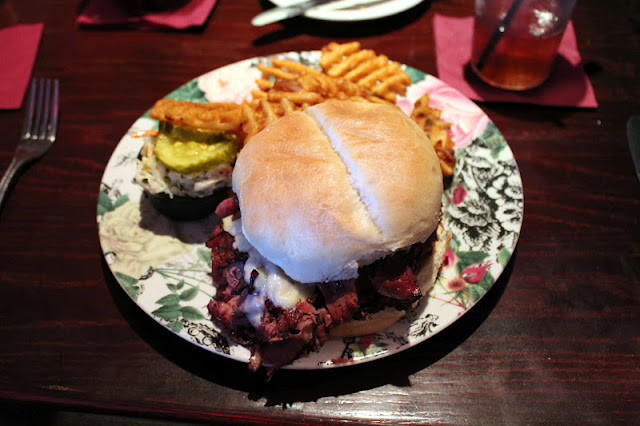 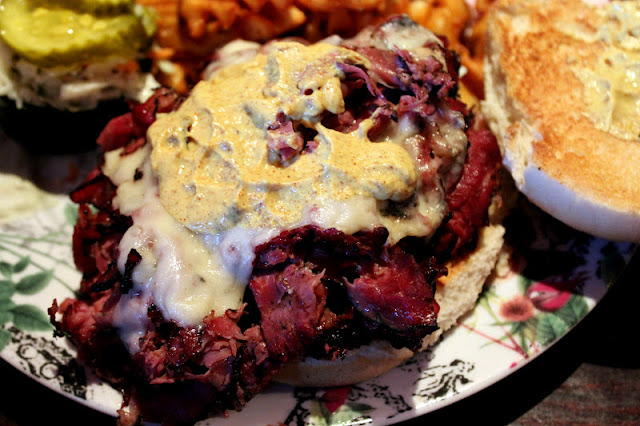 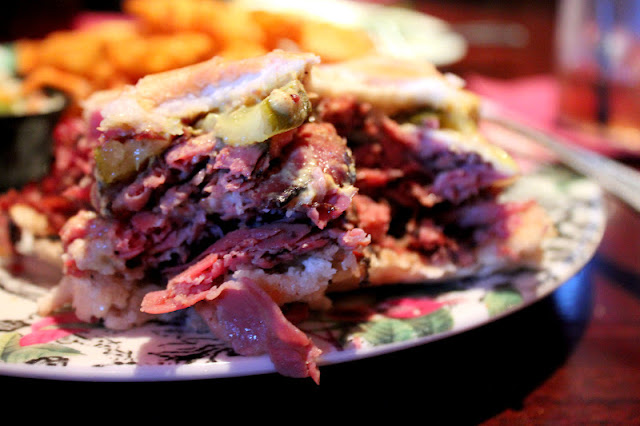 My favorite pastrami sandwich I have ever had was the #19 at Langer's. My second-favorite was a monstrosity I ate at Katz's many years ago, something I wish I had pictures of. (Although, being that I now live less than three miles away, I guess I could replicate the event.) This pastrami sandwich is #3. The meat was tender and smokey, with only the smallest, necessary bits of salt and fat. The bun was wonderfully soft and the pickles fresh; the cheese and mustard were great, too.

The waffle fries looked great, but for the first time in my life I was served fries and did not eat a single one. I was too full from everything else. (Rick was happy to help with the fries.)

So, as you've probably figured out by now, I really liked Red Brick Tavern. It's not one of my three favorite restaurants I have ever been to, but I can understand why someone else would consider it that. The food was fantastic and dinner for six ended up costing a lot less than I was expecting. (The only thing that keeps me from saying I love the place? The service was glacier-slow. Dinner took over two hours and from the time we were done with our food to the time we walked out the door, forty minutes had elapsed, the process of flagging down our server and getting the bill/delivering payment a painful one, especially considering at that point there were more servers than occupied tables in the restaurant.)

At one point, Rick and Kathy were describing the nachos, a hubcap-sized platter of chips and cheese with chili and, apparently, a dozen other things that no one could possibly finish alone. I said it sounded good; Kathy said next time she and I would split an order with a pitcher of beer.

As I was reading the beginning of this entry, most of me was really hoping that it lived up to Rick's praise. The teeny, tiny, devil on my shoulder was hoping it didn't, just to see how you could diplomatically slam the place.