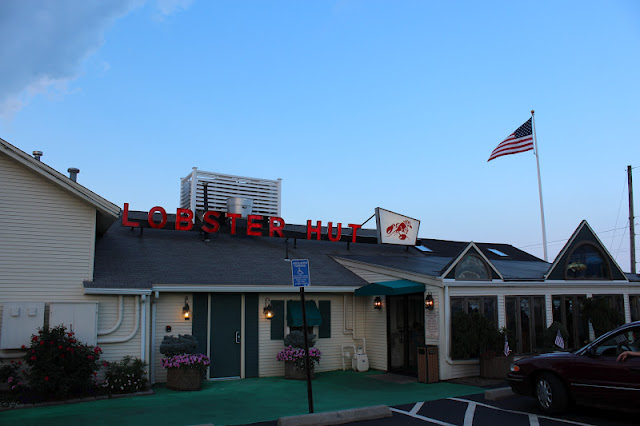 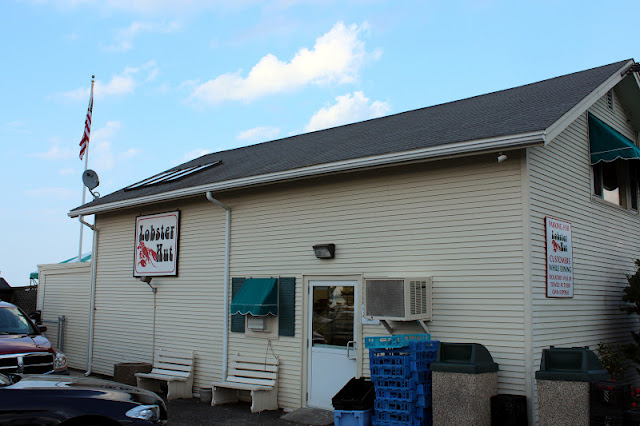 4th of July on the Plymouth, Massachusetts waterfront. Man it was crowded. I had to come to Plymouth with my parents because my dad wanted to spend an entire day doing research in the Mayflower Society library. It just happened that the 5th was the best day for that, so we got into town on the evening of the 4th.

I asked the manager of the hotel for some dining recommendations. He named a few places, though he cautioned that the waterfront was going to be extremely crowded. But he mentioned that Lobster Hut was big and might be our best bet if we wanted to eat with a view of the water. So after settling in to our rooms, we headed down to the water. 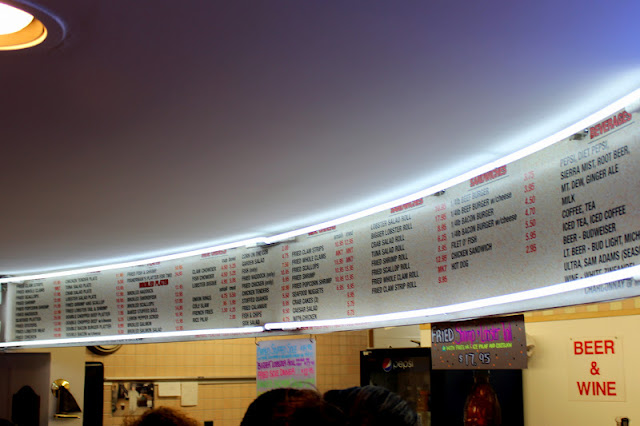 The place was definitely crowded. We only had to wait in line for a minute, but within five minutes of us ordering, the line was out the door. However, it was efficient they did a really good job of taking orders, answering questions, and moving the line along. I ordered the fried lobster tail and shrimp combo, and my parents each placed orders for twin lobsters. 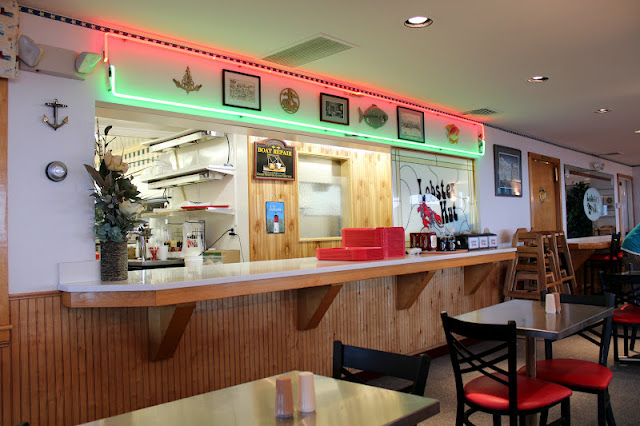 Somehow I managed to take a photo with no one in it. I have no idea how I accomplished this. 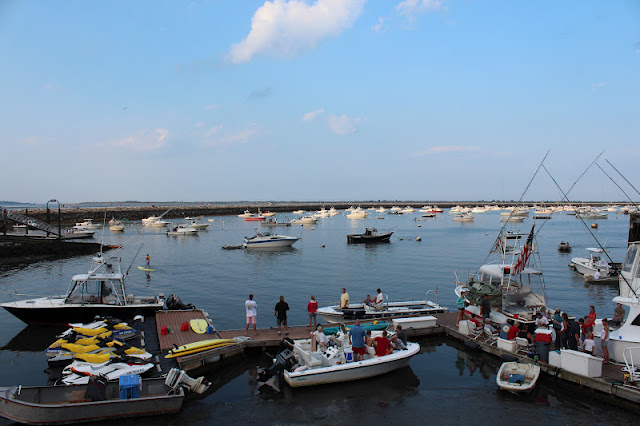 We sat at a table looking out on the patio and, just beyond, the water. The fireworks over the harbor were not starting for at least two hours, but people were already showing up to get good seats. 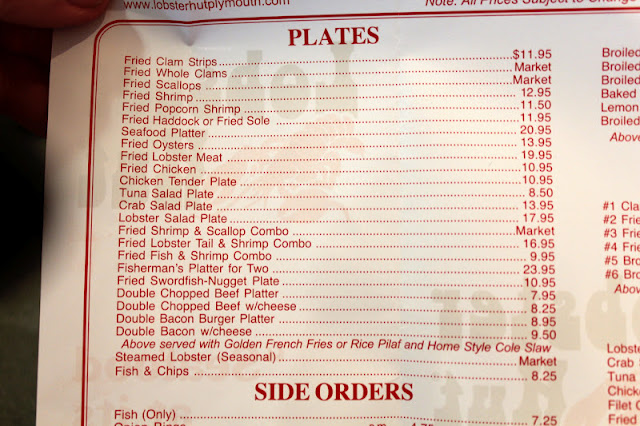 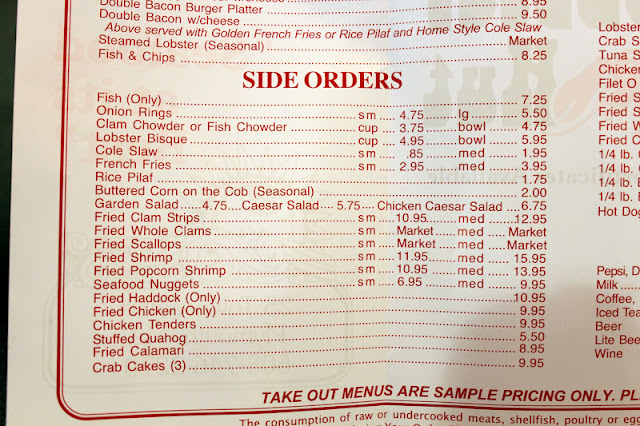 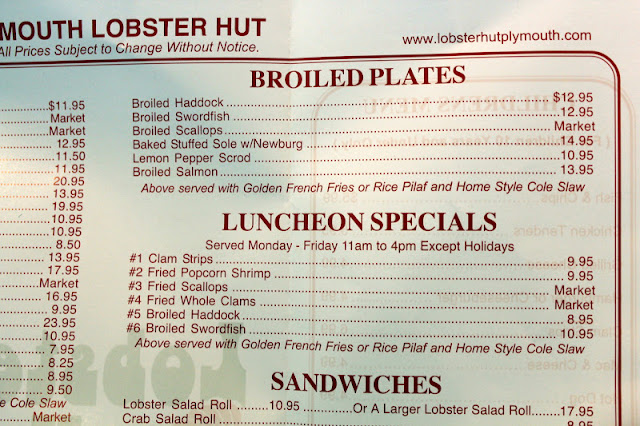 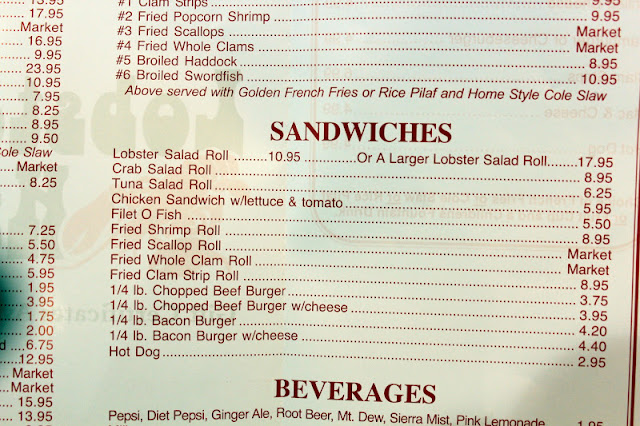 We had to wait fifteen or twenty minutes for our food, but, considering there were more than 100 people in the restaurant, that didn't seem like a bad wait. And it gave me time to take lots of photographs. 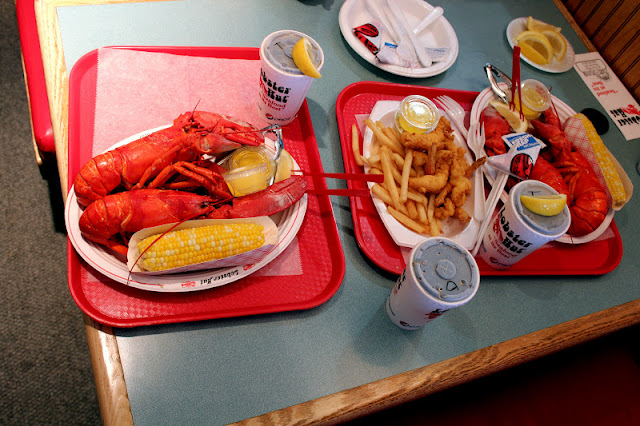 And here's what our food looked like when it hit the table. I've seen uglier spreads in my life. 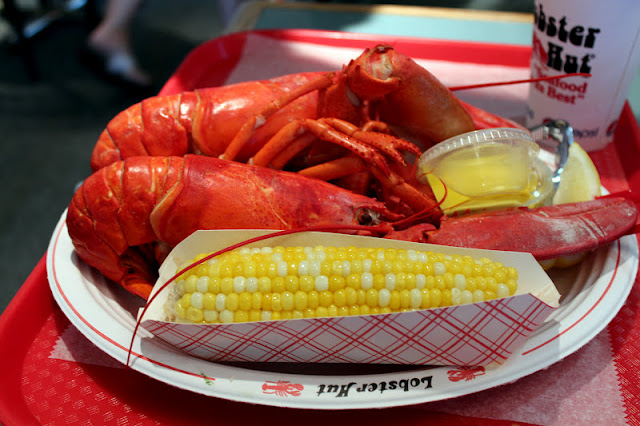 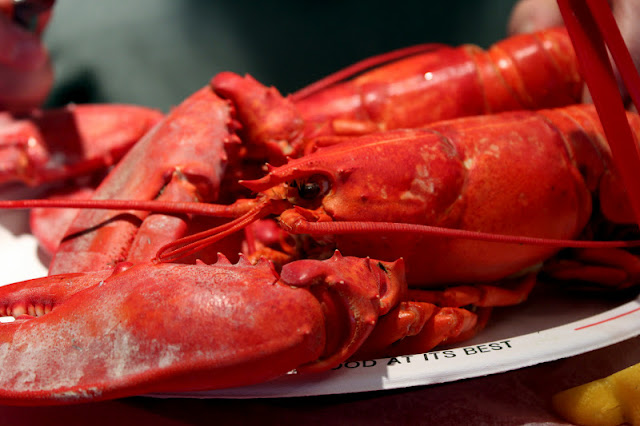 My dad was thinking that the twin lobster dinner was going to consist of two tails - not two whole lobsters. I can seen why he thought that: the dinners were $32.95 each. (In California, that doesn't even buy you one lobster tail at many restaurants.) But I've eaten lobsters in Massachusetts more recently than my parents, so I had a hunch they were going to be getting two of the whole crustacean.

"Are you complaining about receiving too much lobster?" I asked. 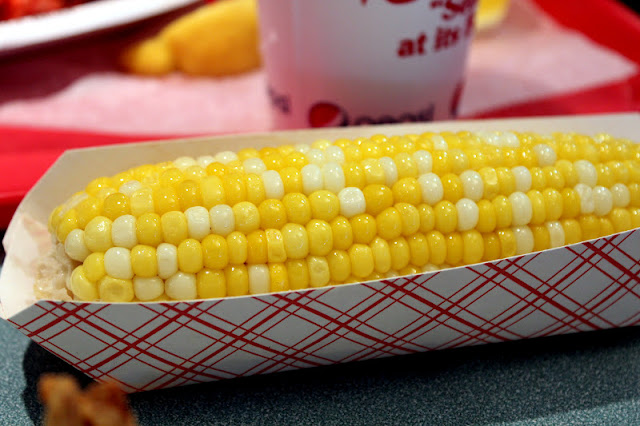 My parents loved their corn. 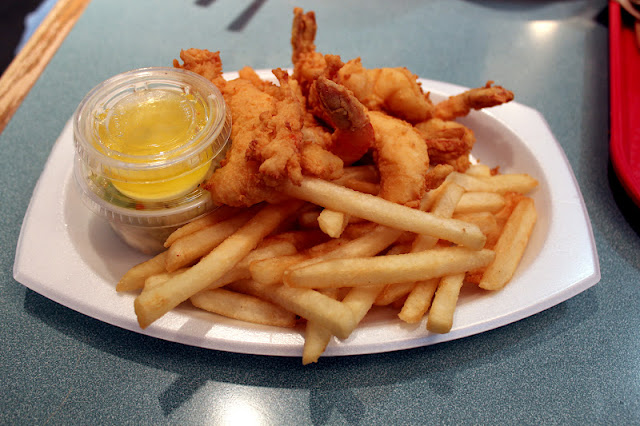 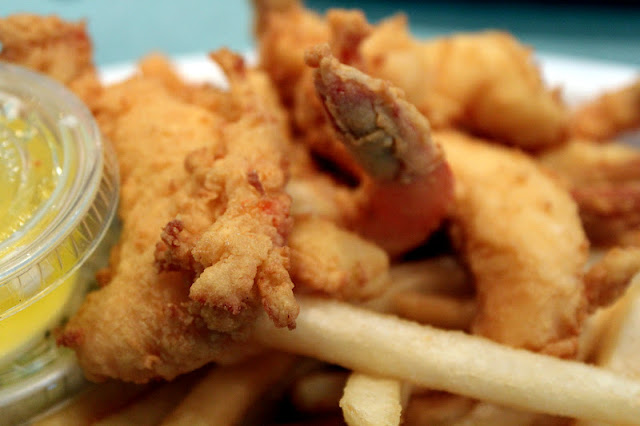 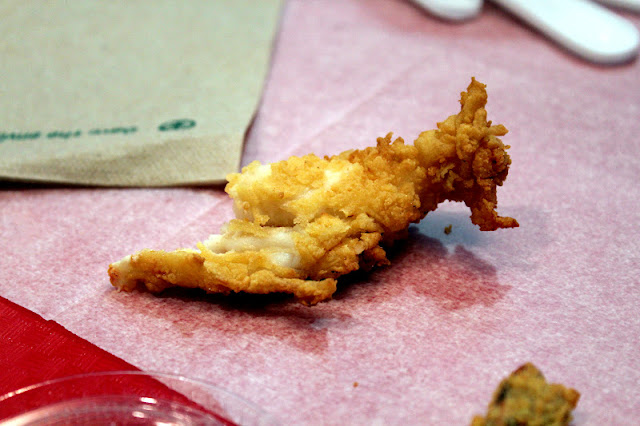 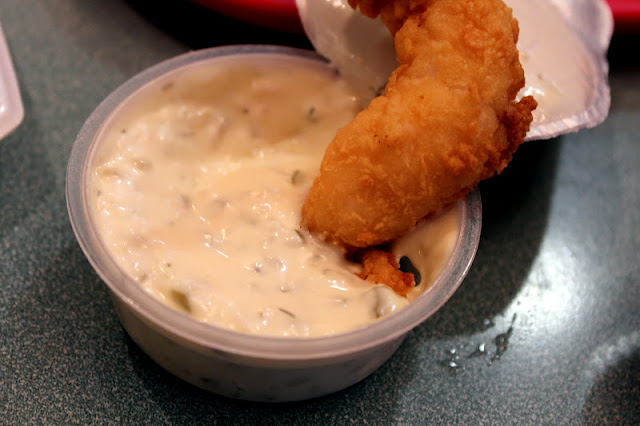 I ordered the fried lobster tail because I'd never had that before. Well, there's a reason why I've never had that before: it's not really all that good. I mean, it wasn't bad, I would have no problem eating it again, but it was gilding the lily. Lobster tail is such a delicious, delicate treat that it really has no business being battered and fried. I think I knew this all along, but I just had to try it. 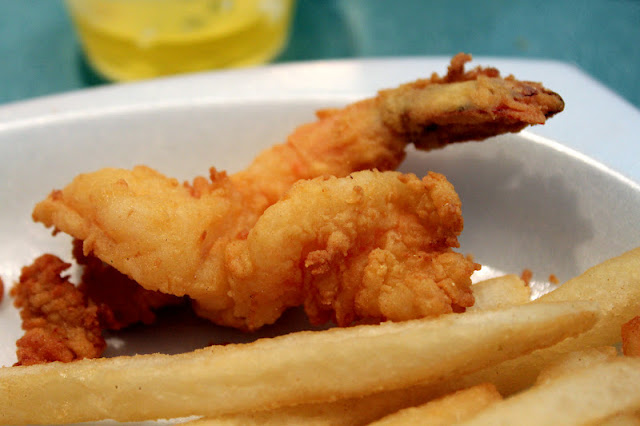 The shrimp, on the other hand, were better served by being fried. I really liked them. 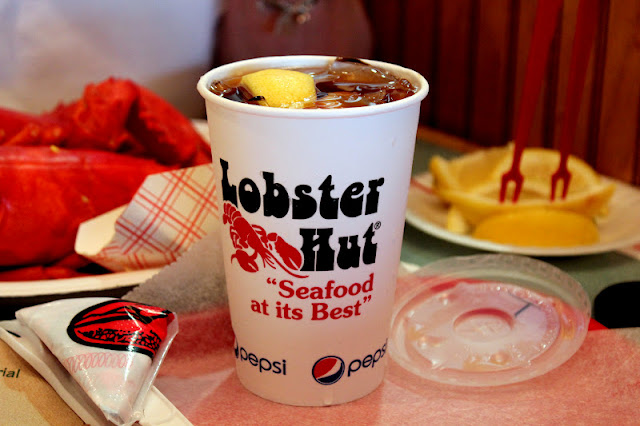 The iced tea was great, too. 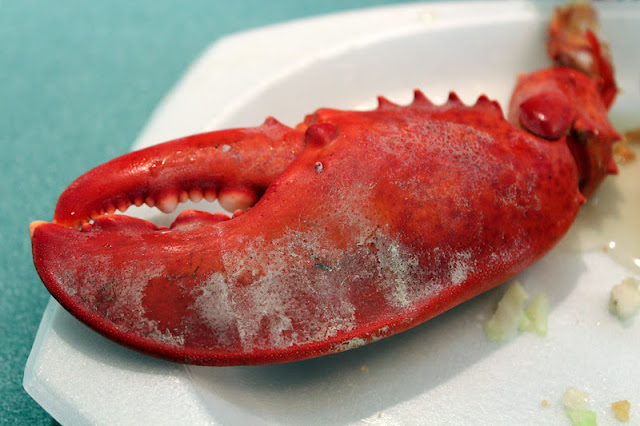 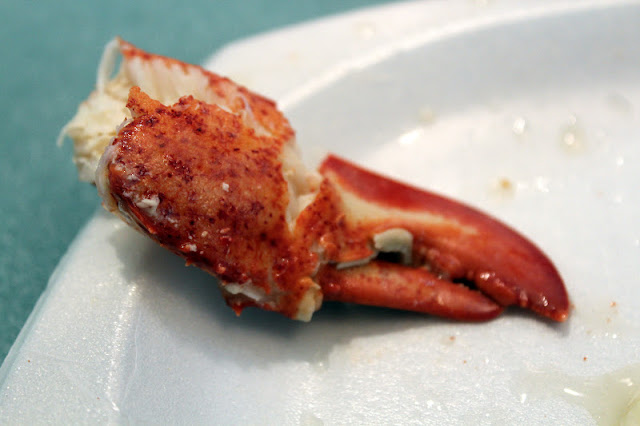 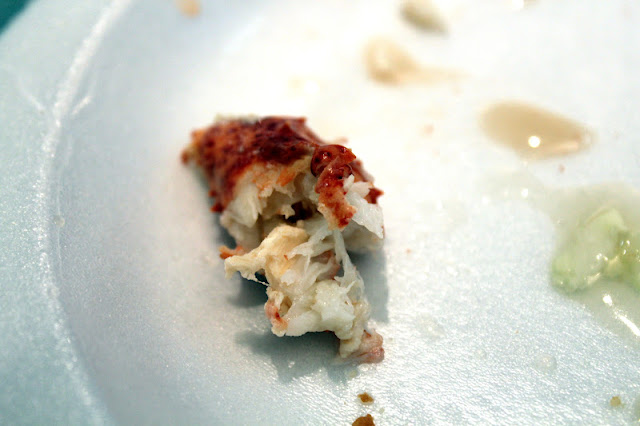 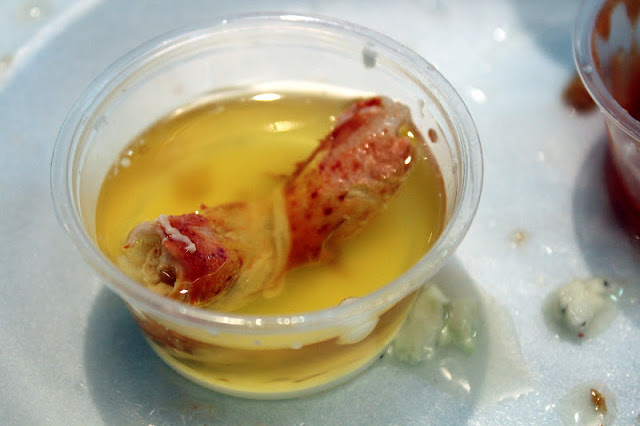 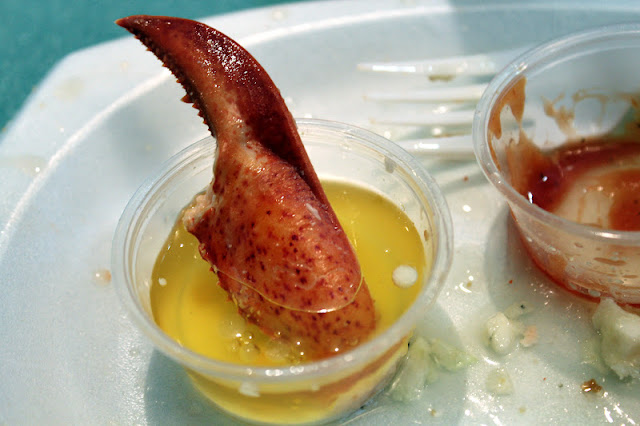 Thankfully, my mom couldn't finish her second lobster, so I got quite a bit of fresh lobster meat. It was really, really good. 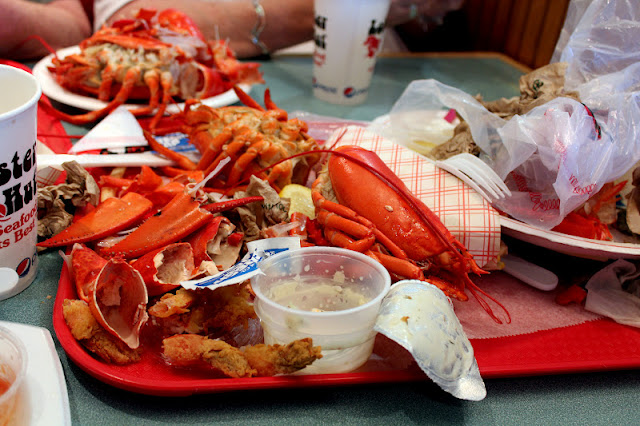 Yes, we made a mess. It was worth it. 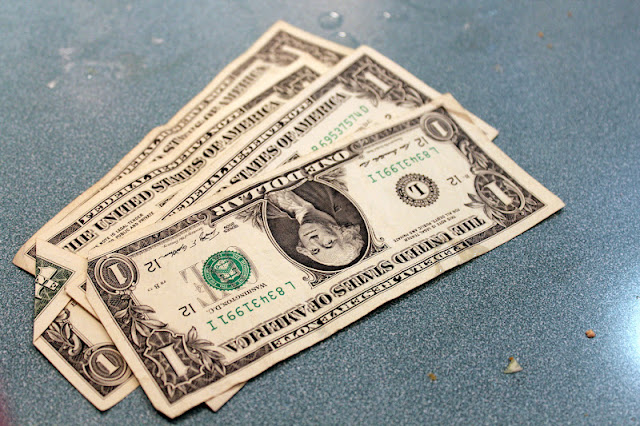 I learned, after ordering and before receiving the food, that if you return the claw crackers, you receive two dollars back for each one. So really those lobster dinners were on $30.95 each, plus a $2 deposit for the crackers.

I would absolutely return to Lobster Hut any time... even on the 4th of July. And for someone who doesn't enjoy crowds, that's saying a lot. But I wouldn't get the fried lobster tail again. The fried shrimp? Sure.... but most likely I'd just get a steamed lobster or two.

I'm not as much of a seafood fan as you are, but I'm sitting here looking at those pics and drooling. Did you get a good place to see the fireworks? Do not tell me you didn't watch the fireworks, please...

pp- just curious- what was your dad researching?

The fried lobster may not have been that good but it still looks cool.

We do a lot of vacationing in the area, and love the Lobster Gut. Even better though....Crabby Shack, right next door. Great food, and the BEST clam chowder you will ever have in your life!

Anon: Genealogy. He is a descendant of a Mayflower Pilgrim. (Which, I guess, would make me one too.)

Michelle: Yeah, it does... but not as good as my parents' fresh lobster, right?

Bob: That place was PACKED. I don't know if we could have eaten there. What about Wood Seafood? That may or may not be coming up soon.

Don't know much about Wood Seafood; LH and CS are the only two I've been to. CS is definitely worth the wait though.

*** Just saw my typo in my original post. Lobster Gut...LMAO!

I actually thought that was intentional - like you were saying you eat so much there you call it the Gut instead of Hut. No worries, funny either way.

Yum! Love that place, was there about 8 years ago. Glad to know it hasn't changed.