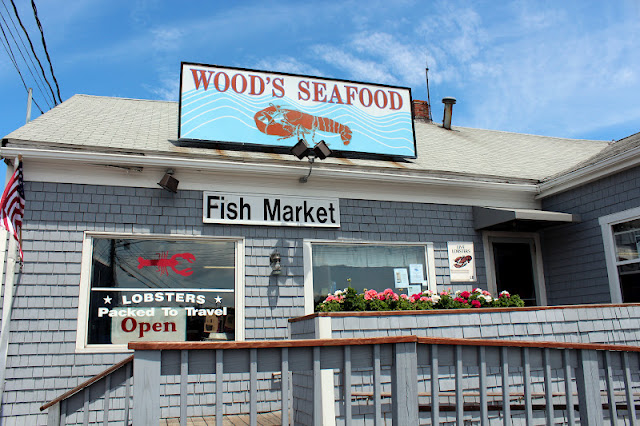 The plan had been this: we dropped my dad off at the Mayflower Society library and we were going to return in a couple of hours and pick him up so we could all go to lunch. But when we returned, he was immersed in studying genealogy and didn't want to leave; he wanted to work straight through until the library closed.

So my mom and I drove back down to the waterfront, where we'd eaten dinner the night before, and went to Wood's Seafood, right across the parking lot from the Lobster Hut. 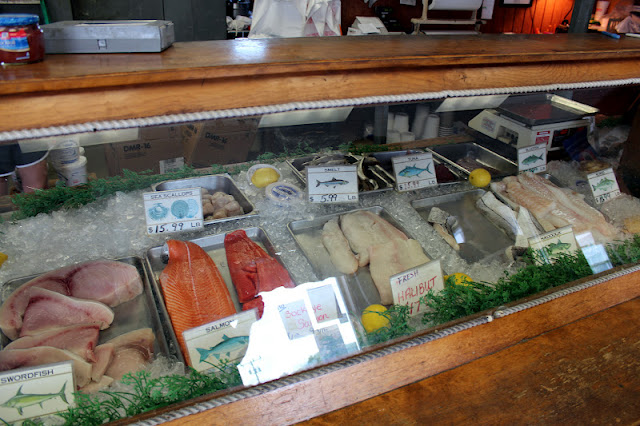 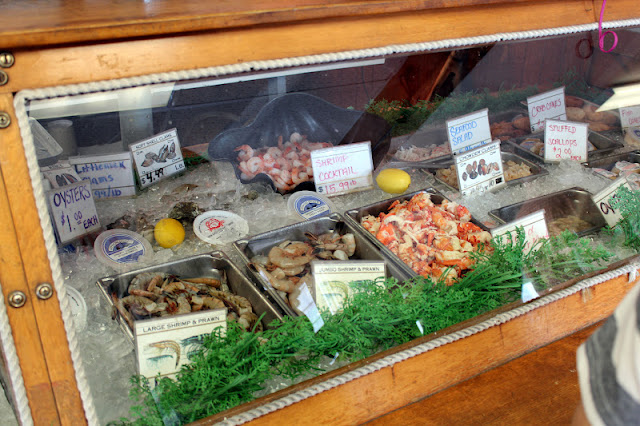 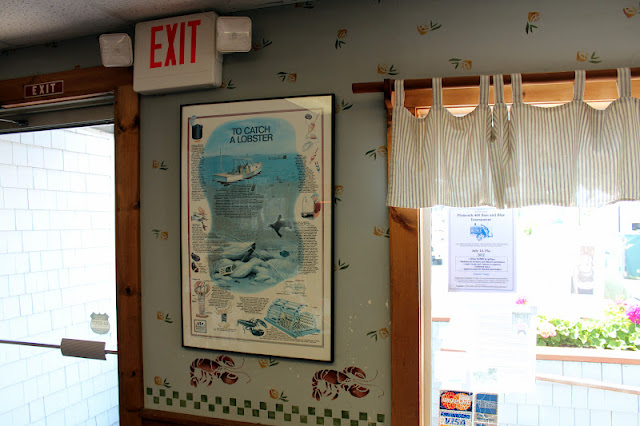 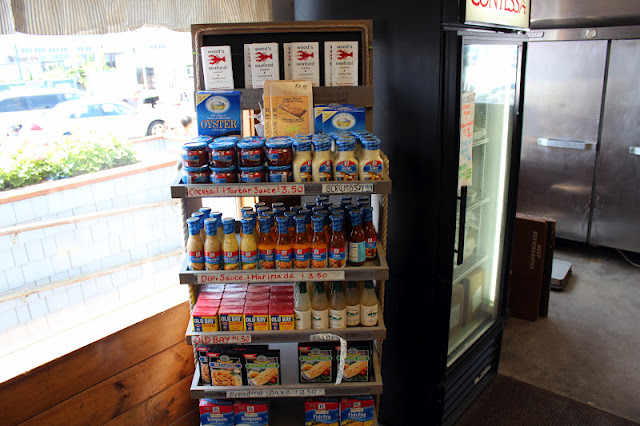 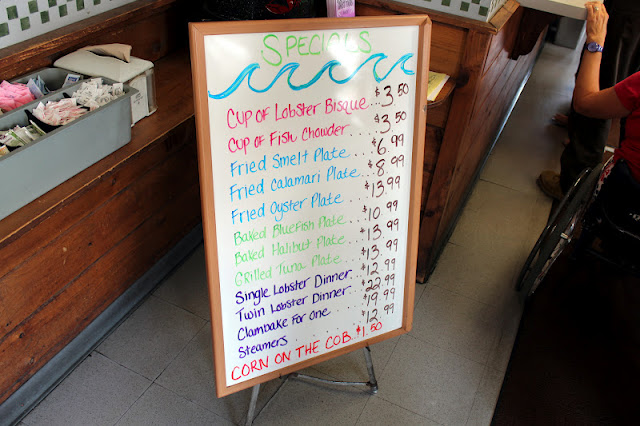 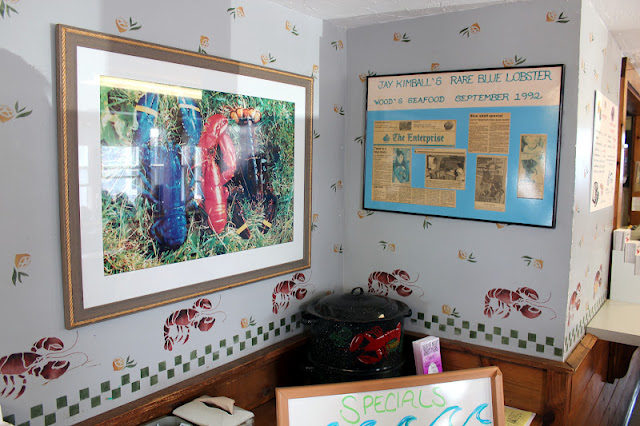 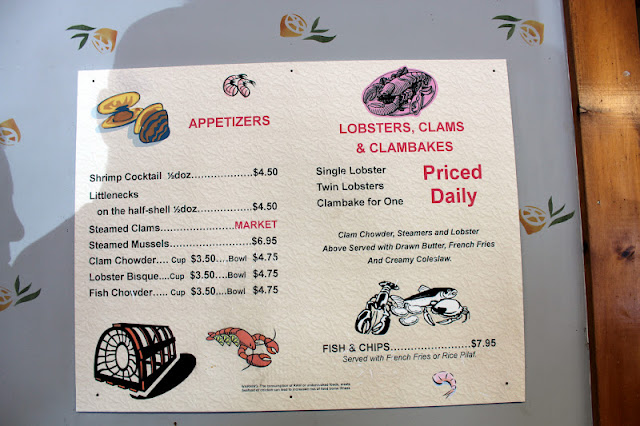 You order at the counter and then take a seat, so we stood in line for fifteen minutes, behind a dozen or so people. It gave us plenty of time to study the menu. 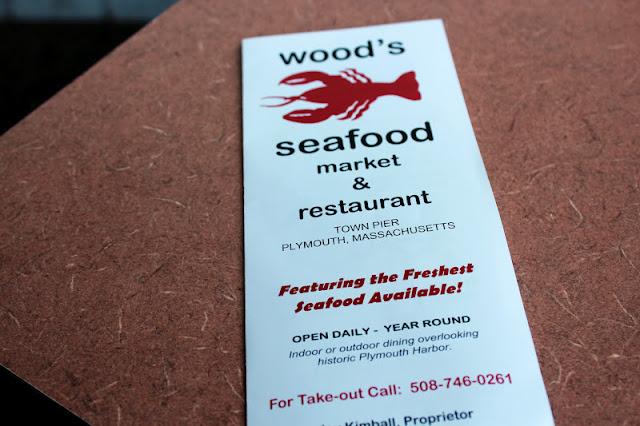 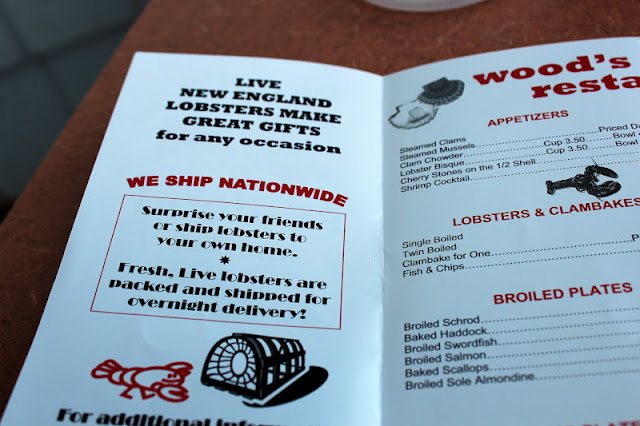 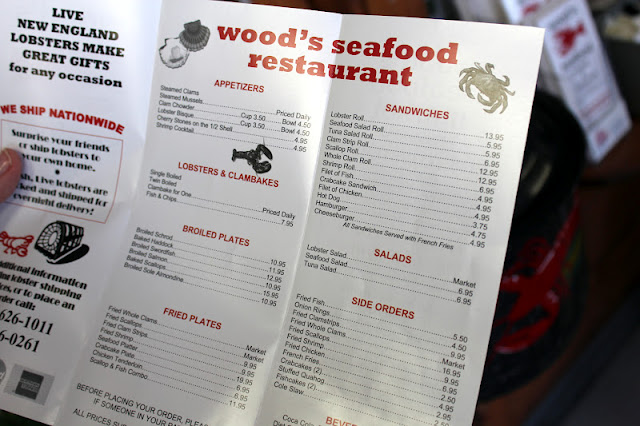 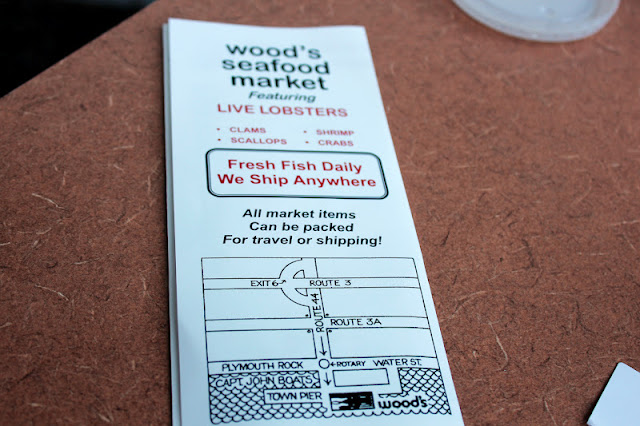 The menu at Wood's Seafood is pretty similar to the Lobster Hut. I ordered a lobster roll and two crab cakes; my mom ordered the clambake for one. 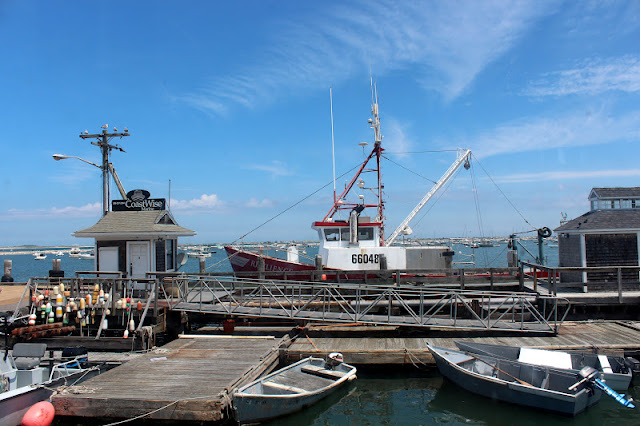 We took a table by the window, looking out onto the harbor. When ordering, the girl had told me that the clambake would take fifteen to twenty minutes, but I didn't really care. It was a nice day. 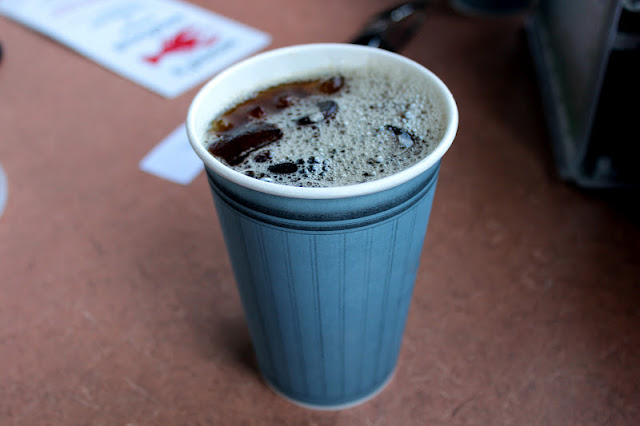 I drank a lot of iced tea over this week of vacation. It was hot. Not the West Coast kind of hot where you say "This sun feels good, what a nice day." I'm talking about the East Coast kind, that muggy heat where you can't seem to quench your thirst and every time you walk into an air-conditioned room you go weak in the knees. 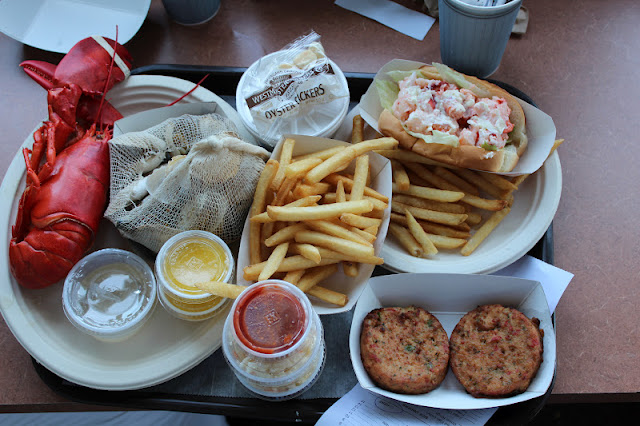 This is what our food looked like when it was ready. Like the Lobster Hut, the fries were pretty worthless, but, obviously, I didn't really care about the fries with all the rest of the food here. 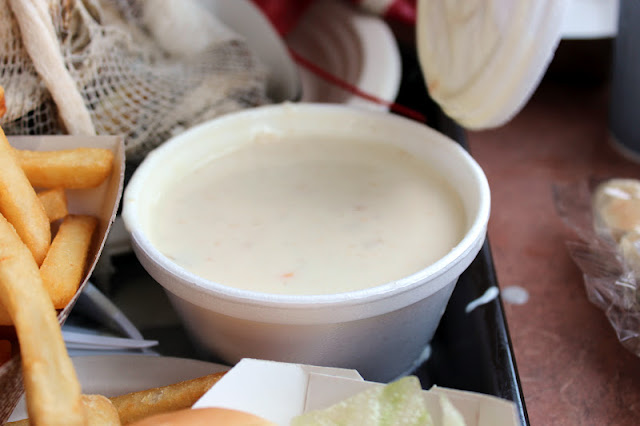 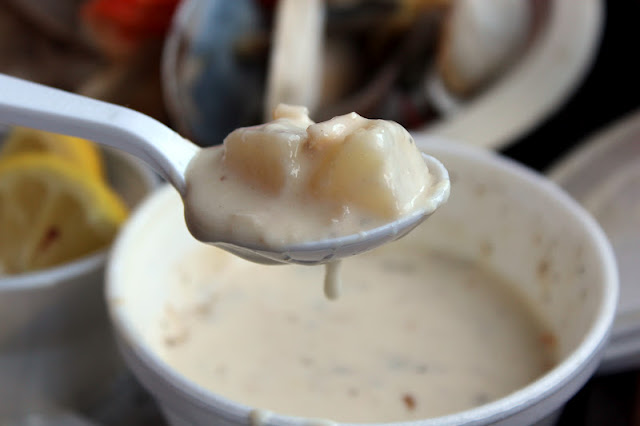 My mom really liked the clam chowder. I've never been a fan but I tried this, and it was pretty damn good. 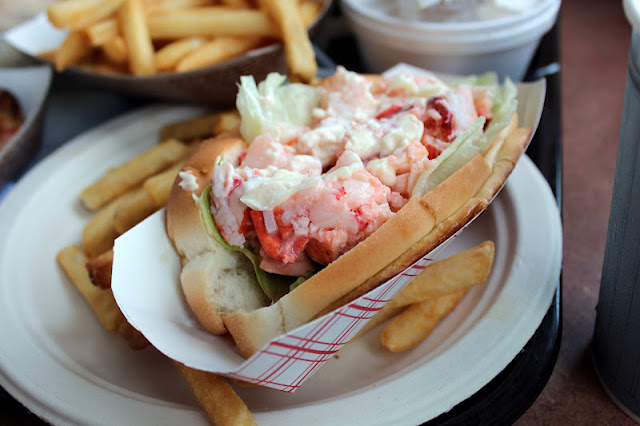 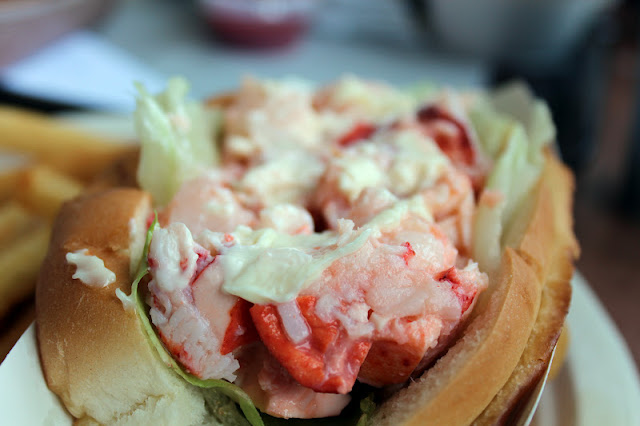 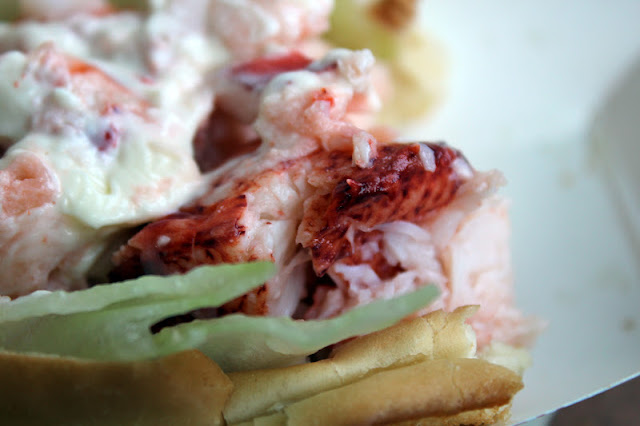 I loved my lobster roll. I wish I'd gotten one of these at the Lobster Hut instead of that fried lobster tail. The meat was cold and fresh, the lettuce crisp and the bread soft. It's not the best lobster roll I've ever had, but it was delicious and, at $13.95, cheaper than any lobster roll I have eaten in the last decade (not counting a ten-dollar roll in a basement bar in Boston a few years back that made me sick to my stomach for 12 hours). 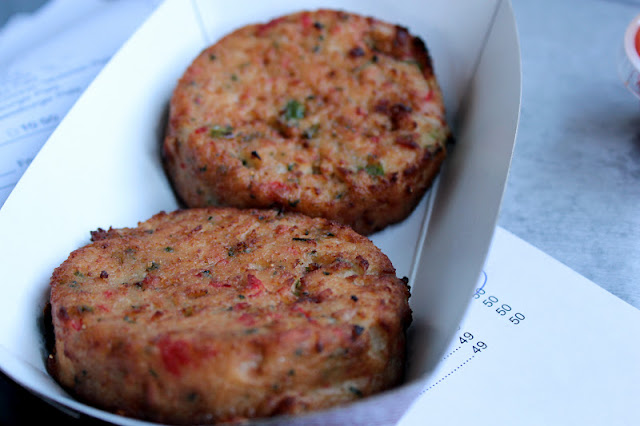 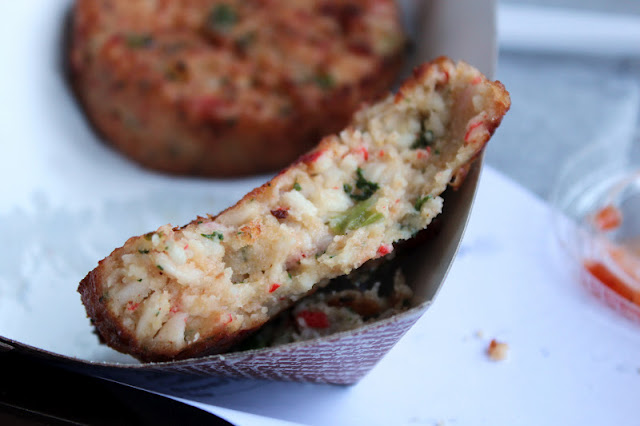 The crab cakes were very good, too. Not great - a little too much filler here to be called great - but enjoyable and, like the lobster roll, very affordable (less than five bucks for a side of two). 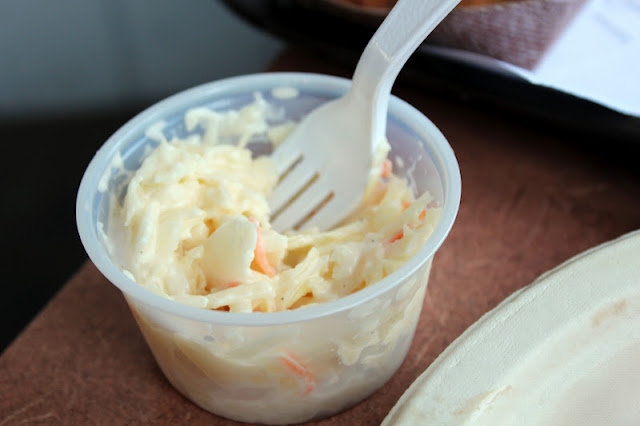 The slaw was good but there was nothing memorable about it, though who cares? You don't come to places like this for the slaw and fries. At least I don't. 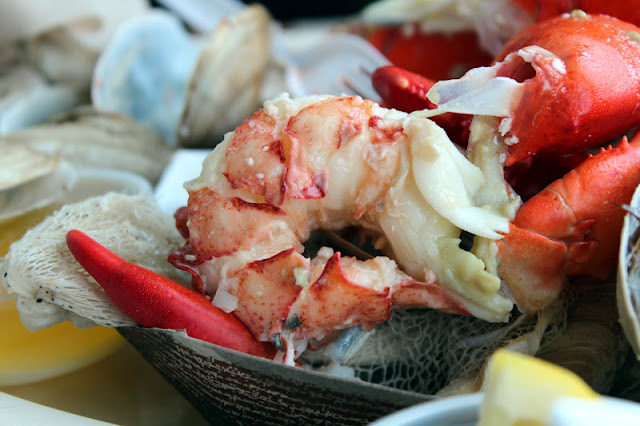 My mom liked her food, no doubt, but she said the lobster was not nearly as good as the one she had at the Lobster Hut. It didn't look like it. She chose wisely the night before; I chose wisely here.

Like the Lobster Hut, I would be glad to return to Wood's Seafood any time. It's not exactly cheap food, but it's delicious and a hell of a lot cheaper than the seafood options I grew up with.

This place looks like my idea of heaven. Actual heaven.

Is this heaven? No, it's Iowa.