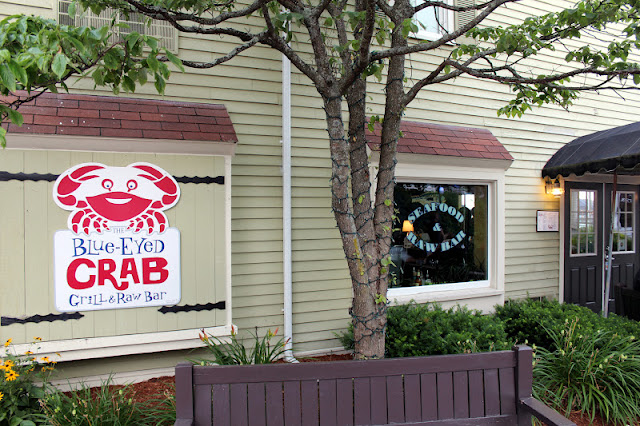 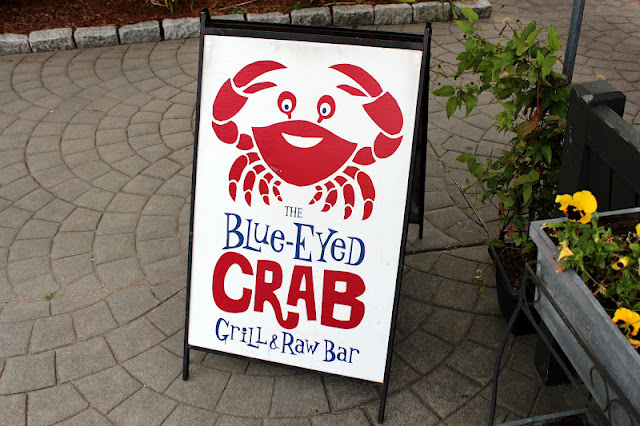 My parents and I had eaten our previous two meals in Plymouth at seafood shacks. Both were really good, but we were in the mood for something a little nicer. Blue Eyed Crab Grille had very good reviews at two websites I checked, so we decided to try it.

It wasn't very crowded when we arrived, so I was more than a little surprised when the hostess informed us that if we wanted to sit on the patio the wait would be an hour. (Before the meal was over, the reason for the lengthy wait would become apparent.) But it was a really nice evening and what's an hour in the grand scheme of things? I said we'd wait. It turned out to take an hour, almost to the minute. 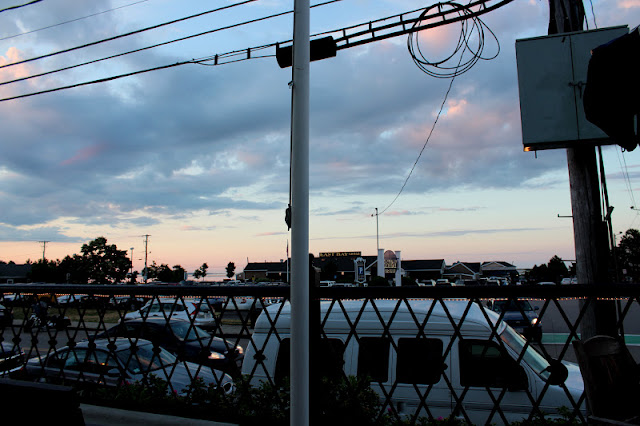 We sat on the patio looking out at the harbor. I am glad we waited. 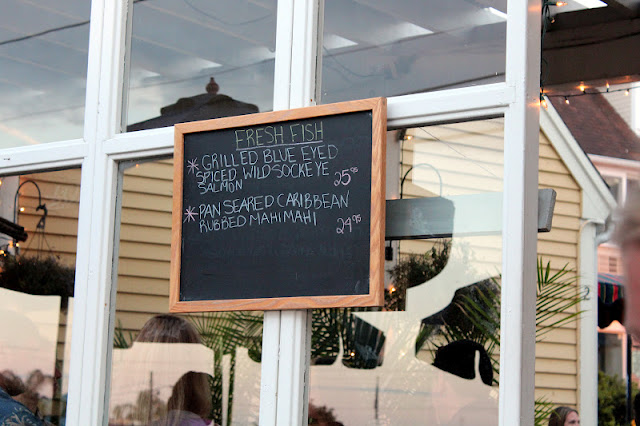 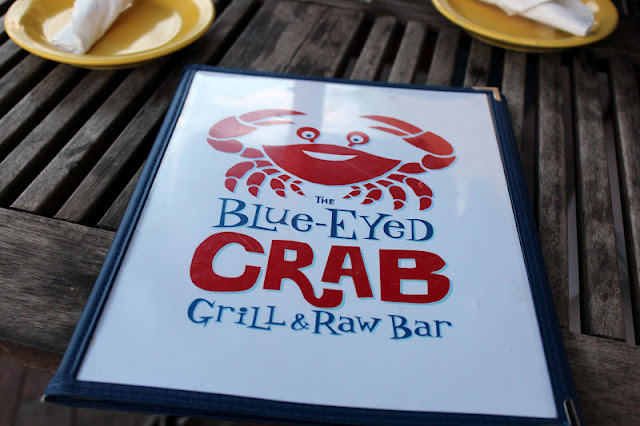 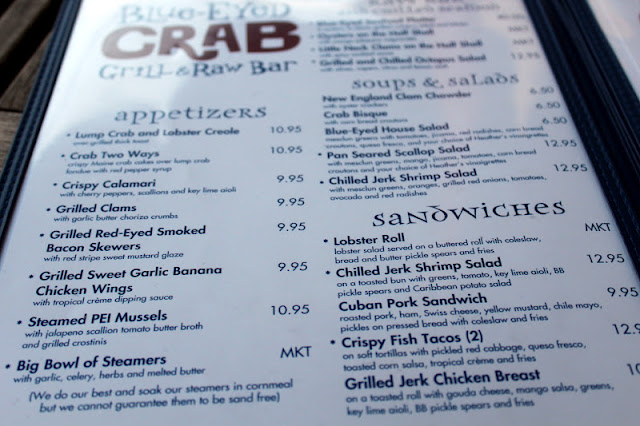 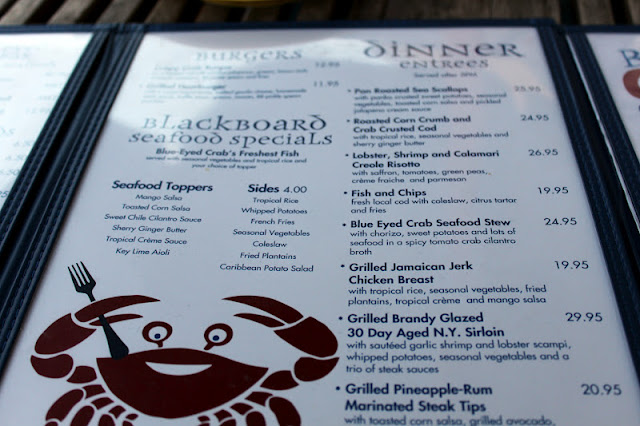 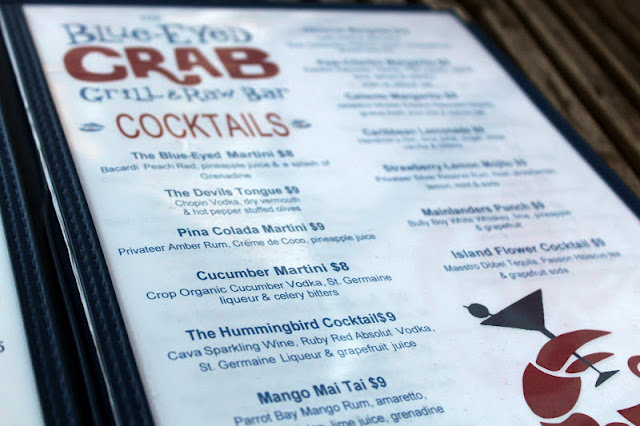 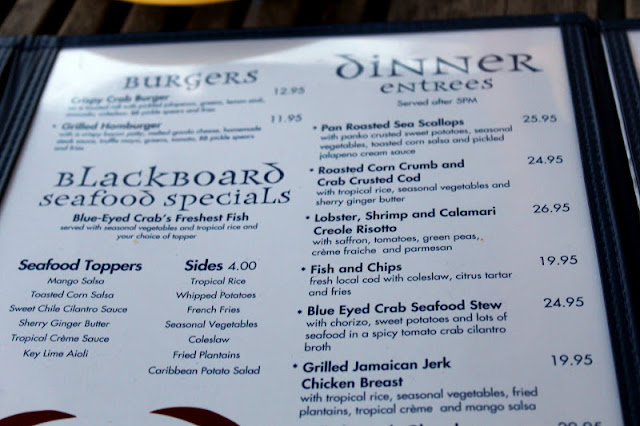 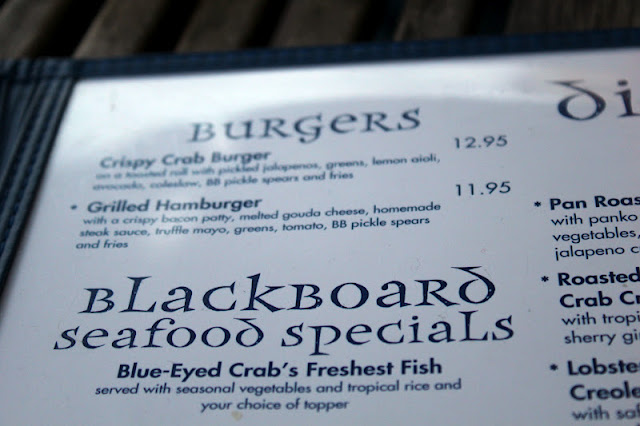 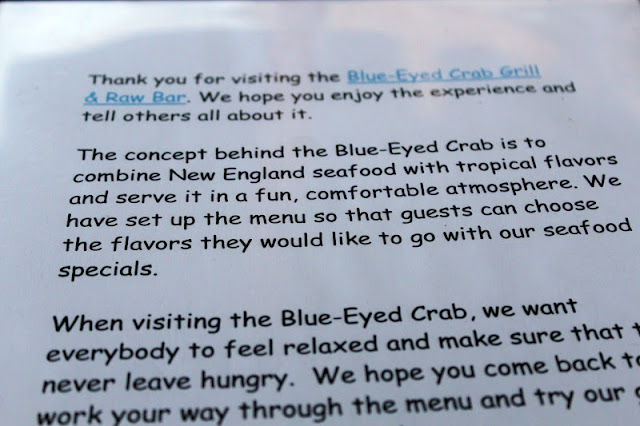 I saw quite a few things on the menu that looked good. 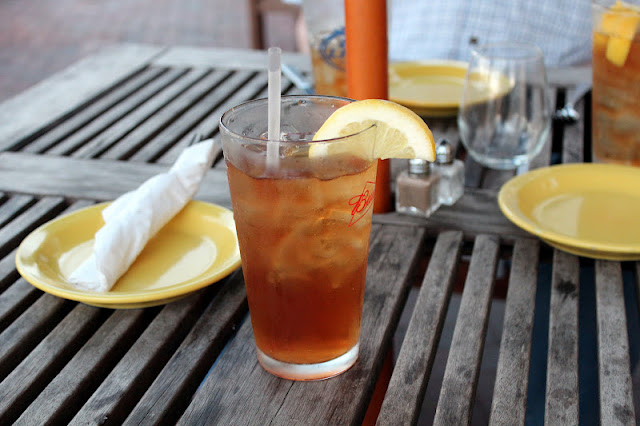 I inquired if they had Pacifico - it goes beautifully with seafood. They did not. So I had an iced tea. After drinking it, the waitress asked if I would like a refill. I said yes please. She returned ten minutes later and announced that the restaurant was out of iced tea.

"Can they make more?" my mom asked. 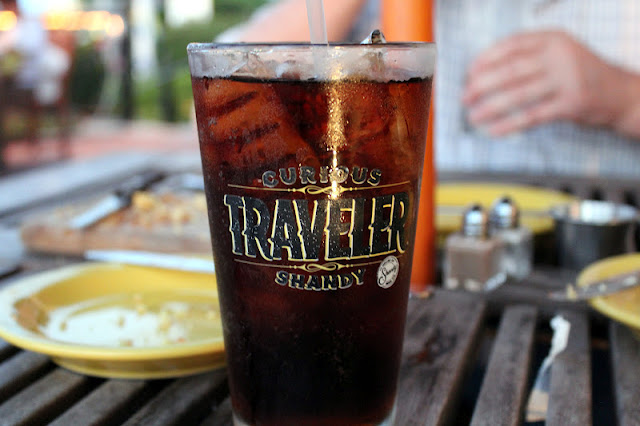 So I asked for a soda, which took another fifteen minutes (and a reminder) to receive. 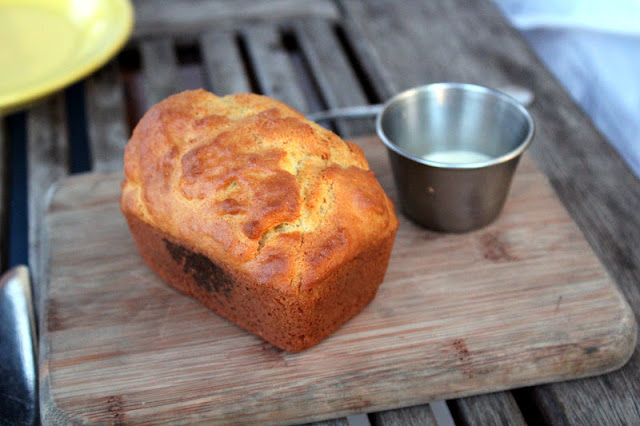 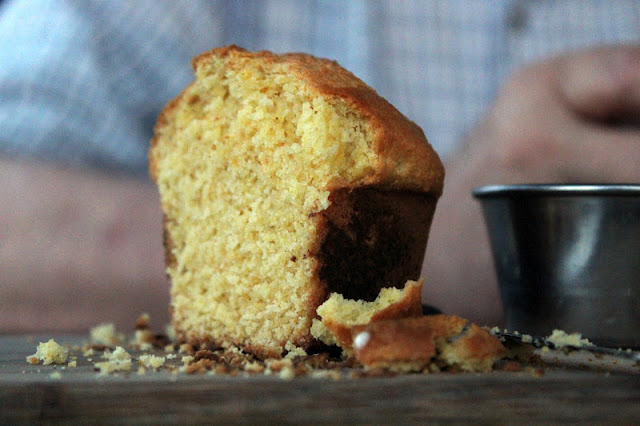 I've never been a big fan of cornbread, but this was really good. 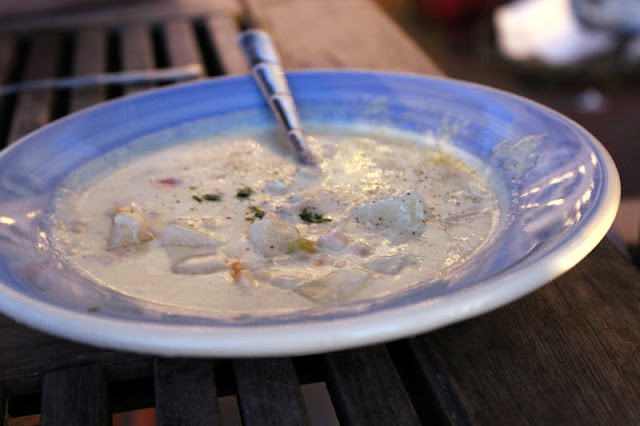 My mom started with a bowl of clam chowder. She said it was excellent.

My dad had ordered fish and chips. A half an hour after he ordered it - yes, thirty minutes - the waitress came to our table to tell us that they were out of fish & chips. So he decided to order himself a bowl of clam chowder as his entree. 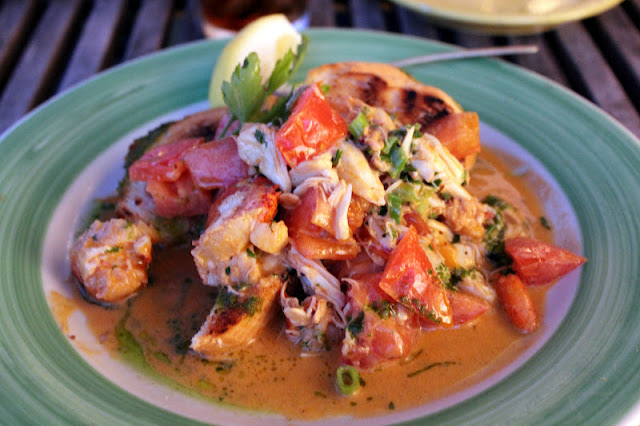 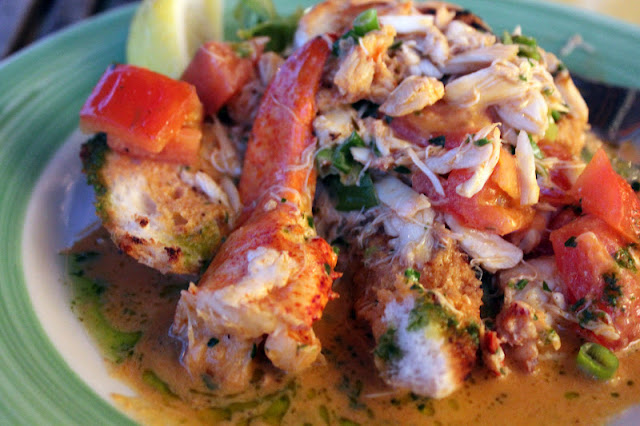 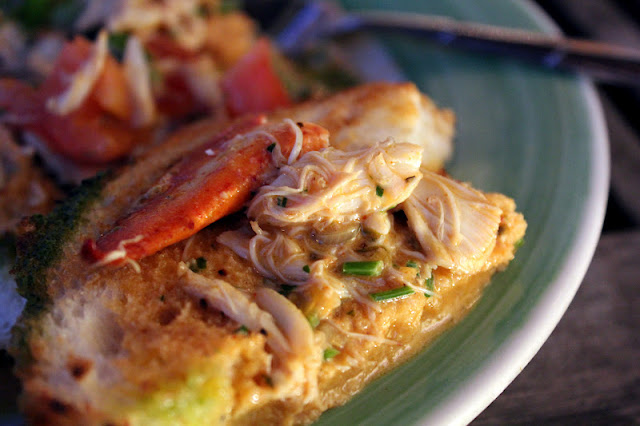 I started with the "Lump Crab and Lobster Creole." The flavors were great: spicy, with grilled bread and tender crab. The lobster meat was on the tough side, but it was still lobster, so I loved it. I thought about offering some to my dad since he'd been screwed over on his fish & chips, but I knew this would have been much too spicy for him. I loved the amount of spice, though. 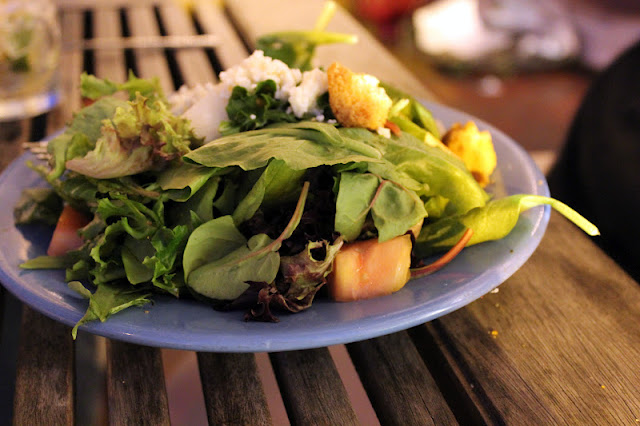 My mom had a salad as her entree and she thought it was very good; I tried the blue cheese vinaigrette and really liked it. 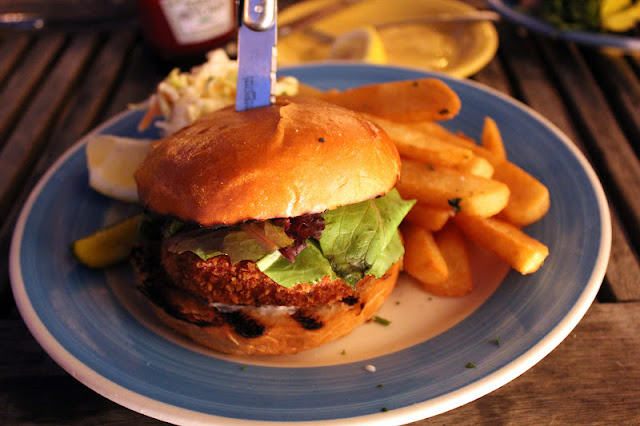 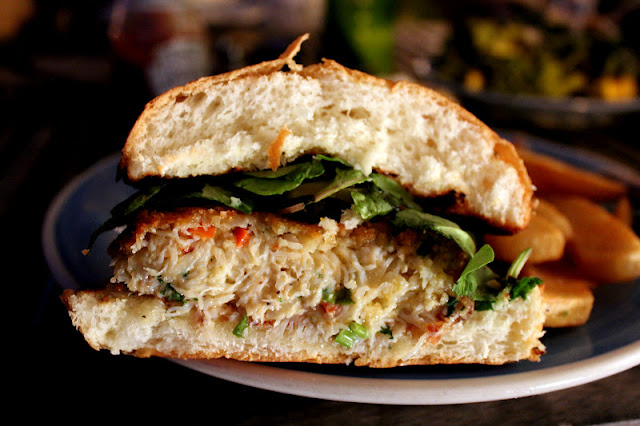 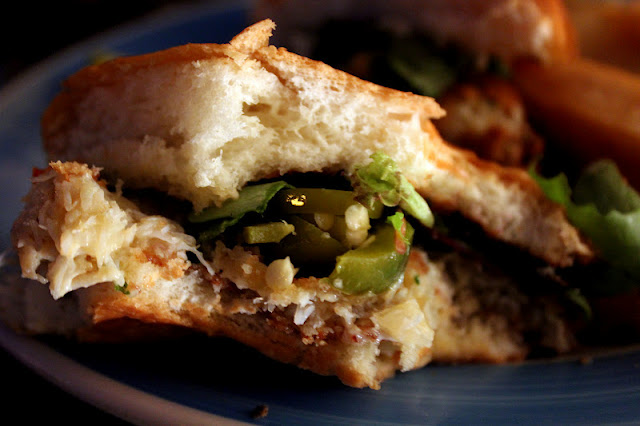 My crispy crab burger was awesome. I have traditionally shied away from crab cake burgers/sandwiches, because I don't enjoy the contrast between bread and crab cake, but this was a spectacular exception. The bun was buttery soft and the crab cake was one of the ten best I have ever had: all crab, very little filler. The greens, lemon aioli and picked jalapenos were wonderfully considered complements. The slaw was great and the steak fries were perfectly cooked: crispy outside, soft inside.

I really enjoyed my food at Blue Eyed Crab.

But I wouldn't go back.


The service, as I mentioned, was nothing short of a joke. An hour wait for a place that isn't crowded. Running out of iced tea (and taking 10 minutes to tell me, then another 15 minutes to get a replacement beverage). 45 minutes to receive appetizers and more than an hour to receive entrees. Telling my dad a half-hour after he placed his order that they were out of it.

And my favorite: while we were waiting to be seated, one of the bus boys (or line cooks) finished his shift and used the phone from the hostess's stand to call his buddy to pick him up, right outside the front door - he was smoking and swearing and he spit on the ground two feet away from my mom. I have had quite a few acquaintances who have owned and managed restaurants and every single one of them would have fired that kid on the spot.

As we were paying our bill, a couple who had also been sitting on the patio came up to the hostess. "We just sat there for 25 minutes," the lady said, angrily thrusting the menus into the hostess's hands, "and not a single server has come by our table."

So maybe my parents and I actually received what is considered good service at Blue Eyed Crab Grill.

The food was delicious, but the food was pretty damn good at the other places at which we ate in Plymouth. And none of them necessitated a two-and-a-half hour commitment (despite being multiple times more crowded than Blue Eyed Crab).
Posted by JustinM at 9:00 AM

I love how you're sitting literally a stone's throw from the cape and yet the two blackboard specials are fish from thousands of miles away.

Your creole dish looks fantastic, shame about the service (and the use of comic sans on the menu).

By the way, did you hear much shark talk while you were up there? I'm from Amherst originally and have been to the coast a zillion times (usually up on Cape Ann or New Hampshire) and never remember a shark scare like they're having now.

No, I didn't hear any. This was the 4th-5th of July, so maybe it hadn't occurred yet?