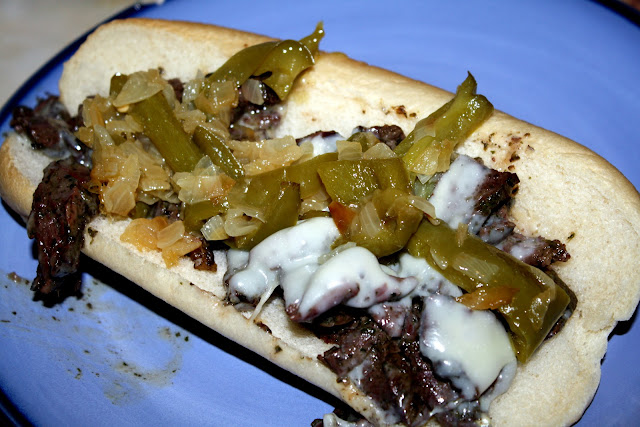 Sometimes nothing in the world sounds better than a cheesesteak sandwich. I'm not going to say it's the perfect food, but there is no food on this planet - including pizza, Belgian fries, lobster tail and Double-Doubles - for which I get a bigger craving. There are times when I simply need a cheesesteak. The other day was one of those times. 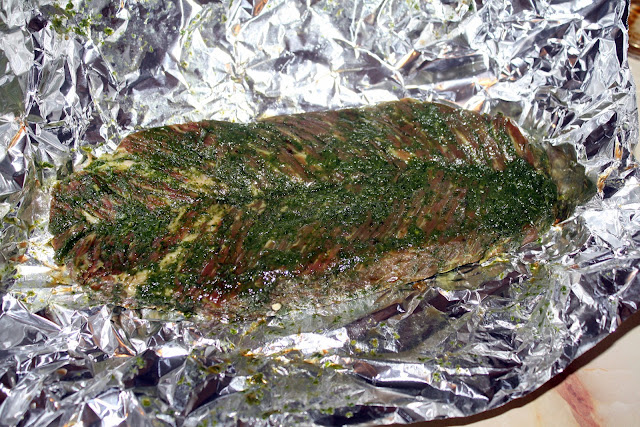 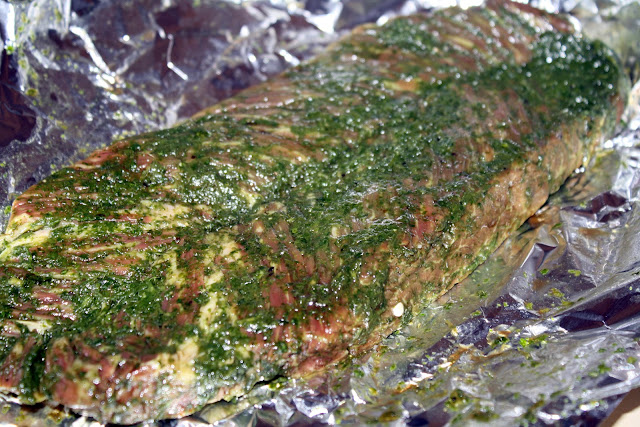 At Paisanos I found a hanger steak marinated in cilantro, parsley, garlic and olive oil. This will certainly do, I thought to myself. 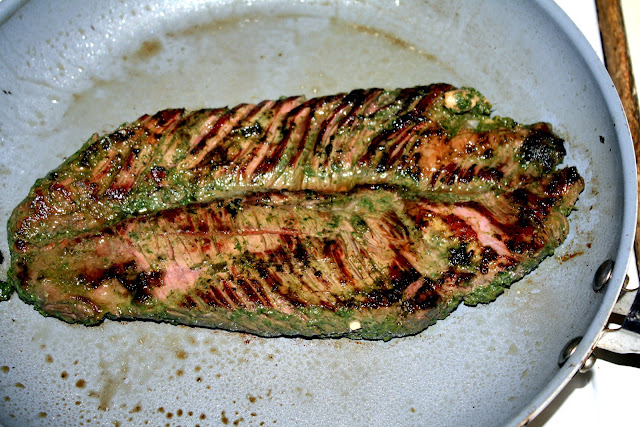 I did not feel like using the indoor grill, as I had just cleaned it a day earlier. So I heated up the Greenpan and slapped the steak down. Two minutes on one side, four minutes on the other. Then I removed it from the pan, wrapped it in foil, and left it alone for ten minutes. 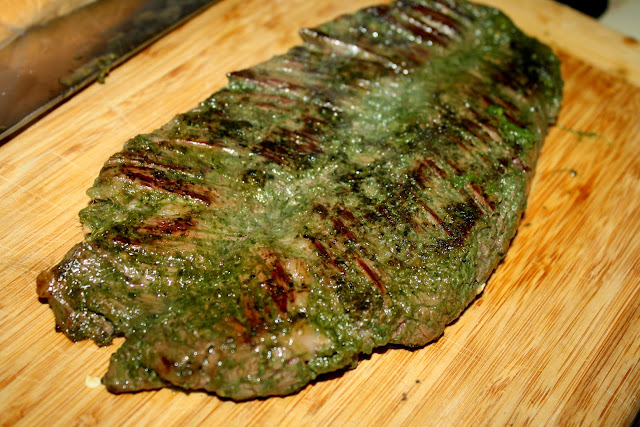 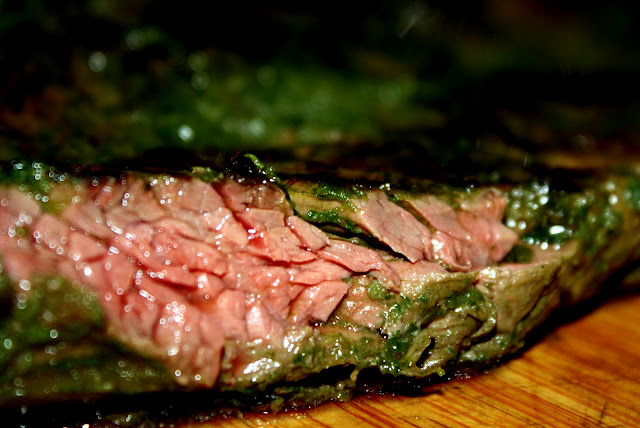 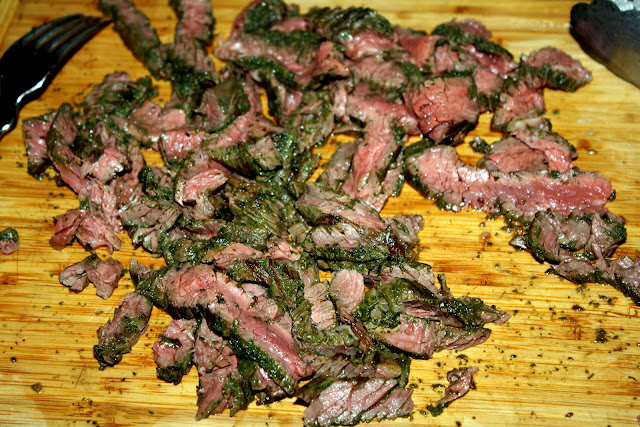 Hanger steaks come from the plate section of the cow; they "hang" down from the diaphragm muscle. Running down the center of the steak is a tough, inedible piece. I cut the meat away from that piece. 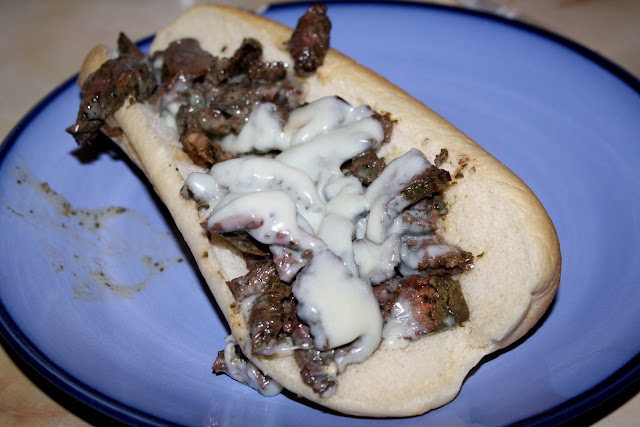 I piled several pieces of meat into a soft, long roll, topped it with a few slices of American cheese, and placed it in the oven for two minutes to melt the cheese.

I topped the meat and cheese with sauteed onions and peppers. 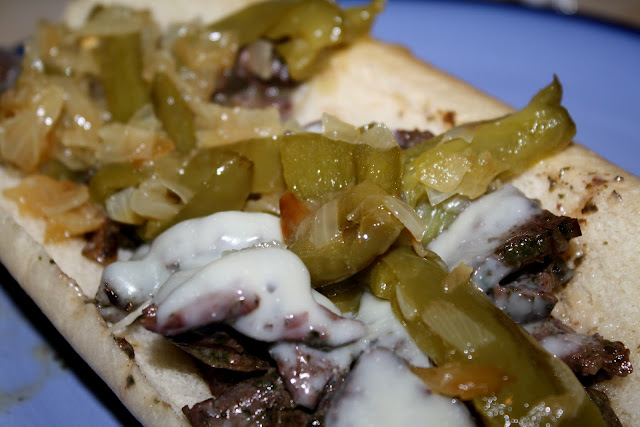 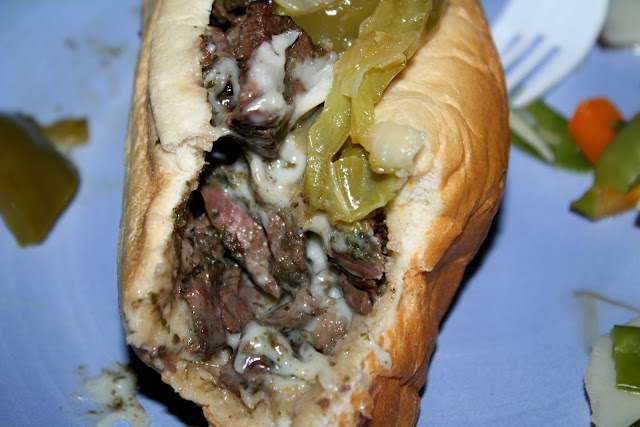 This was one of the best sandwiches I have ever made. The steak was wonderful: buttery with only the slightest hint of the marinade. I probably could have eaten this steak on an old, stale roll and it still would have been a good sandwich. As it was, with the soft roll perfectly containing the insides of the sandwich, it was just awesome. The onions and peppers, which weren't strictly necessary, were nonetheless tasty.

Justin, how do you like the Greenpan? I've been thinking of getting one but I always over think my cookware purchases...

Now, I read a lot of reviews before we purchased them, and a lot of people say that their pans starting wearing down after 6 months. Since I'm not there yet, I can't speak to that.

However, that being said, there are also very specific instructions for how to care for the Greenpans: for prior to using, for heating, and for cleaning. I think it's quite likely that a lot of the people who are complaining that their pans are breaking down did not pay attention to those instructions.

I guess I'll see over the next few months.

im not gay, pp, but i would marry you if u cooked for me every night

If you're Mike Trout, maybe we could work something out. If not, sorry.

That pic of the cross section of the cooked steak... My God.

That looks insanely delicious! I had a cheesesteak craving this past weekend and had to have one - so I get the need. When you do flank steak on the grill do you cook it the same amount of time as on the stovetop? I have my timing down for NY Strip, but I have never made flank steak myself, but am willing to try. (And I apparently like it as rare as you do)

Three things. 1) When I cook steak on my indoor grill, I cook it longer than I do in a pan, because it just doesn't get as hot. On an outdoor grill, I would probably cook it the same brief time as long as the grill was super hot, in other words impossible to hold your hand directly over for one second.

2) I like my steak rare to medium rare as long as I trust the butcher completely and know that it's quality beef. I would never want steaks from Philly's Best so rare, and especially not supermarket steaks.

3) Just to be clear, this was a hanger steak, which is not exactly the same thing as a flank steak. (Not that you claimed it was.) Both should be marinated, though.

That looks phenomenal. I came across your blog about a month ago and have been lurking hard since - I think I've read back to mid-2010 so far.

Random question - is Hawkeye a nod to anything having to do with Iowa?

I'll hang up and listen to your answer. Thanks for such great material.

Hi Sam, welcome. We adopted Hawkeye in June when he was 12 weeks old. He and his brothers were living at a vet's office in Manhattan; one of the girls working at the office named them all after Avengers characters.

I love cheesesteaks and am always looking for the best in NYC. Any come to mind Justin? Never been to Philly so I just care about taste, not really authenticity.

Actually, in the almost 6 months we've been here, I have yet to buy one at a restaurant. I will try to get out for one in the next two weeks.