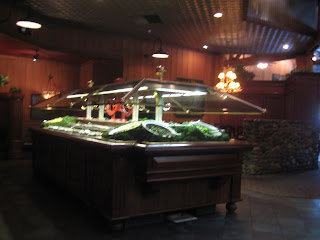 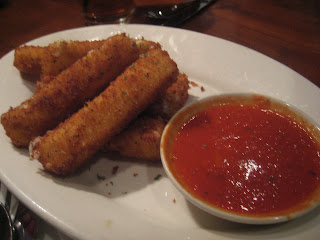 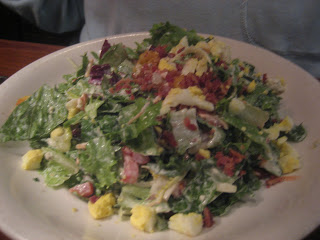 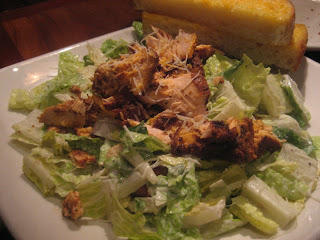 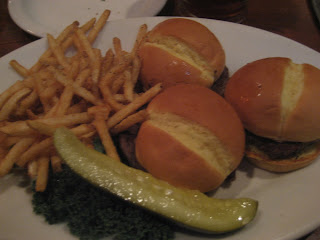 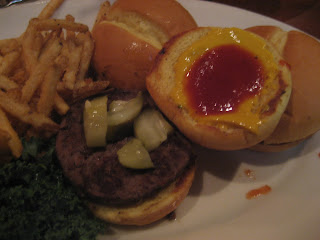 I have always been in love with the history and mythology of the Old West and the California Gold Rush. Several Halloweens as a child I dressed as the Lone Ranger or Billy the Kid. I've spent countless hours in the museums in Old Sacramento, and the Museum of Westward Expansion in St. Louis is my second favorite museum in America (after the Smithsonian National Air and Space Museum.) I am in love with the romance of a mythology developing alongside the actual events that transpired, the idea that not long ago a person was actually, as Fitzgerald put it, "face to face for the last time in history with something commensurate to his capacity for wonder." (Only kidding; I really just like the idea that you could shoot a man for cheating at cards and not get in trouble.)
-
But the restaurants that try to capitalize on that theme are all pretty lame. Clearman's North Woods Inn is okay, I suppose, but that restaurant has a history, at least with me, that is almost the equal of the American West. (Okay, that may be a bit of an exaggeration.) I have been to Tahoe Joe's in Northern California a couple times and thought the food was lousy, although I liked the beer served in a mason jar. I won't even go into the reasons I loathe Cattlemens.
-
But Claim Jumper is probably my least favorite of the bunch. I do not understand the long lines that are almost always present. I cringe when people are served massive portions of mediocre food but still say "Oh, this is so good" simply because it's a massive portion. (This is the same reason I hate eating at Buca di Beppo.) I have been to Claim Jumper several times - it was a favorite of both my grandmother and my old boss - but I have never had a meal there that I would describe as better than average. I used to like their pizzas, but the pizza always take much longer than any other item (a server once told me they come out of a different kitchen and that's why they take longer) so I stopped ordering them because I don't want to make my companions wait.
-
The other day, though, Elizabeth and I were helping my mom run some errands and she was going to take us to lunch. She had a $50 gift card to Claim Jumper (she is a school teacher and sometimes receives gift cards from her students for Christmas) and we were close by, so I figured we might as well go.
-
We just managed to beat the formation of the long line, and we only waited about 5 minutes. They have more selections on their lunch menu than I remember them having before, which is nice to see. (It's been about ten years since I have eaten there for lunch, though, so maybe this isn't a new thing.) We started with an order of fried cheese. This was nothing special but still pretty good; it's hard to mess up fried cheese (although my friend Rebecca and I once split an order at Barney's Beanery that neither of us could eat because it was so terrible.)
-
My mom had the chopped Cobb salad with a cup of soup. The salad was the best thing any of us ordered. I tried a couple bites and it was decent, although the "blue cheese dressing" was much more oily than cheesy. Elizabeth had the blackened salmon Caesar salad. She thought it was okay, although nowhere near as good as the one she usually gets at Gordon Biersch. I tried this as well and agree with her assessment, although again I thought the dressy was much too oily.
-
I had the lunch order of sliders. I love sliders and they are usually a reliable standby. These were the worst I have ever had. The buns were hard and the meat had been frozen. Either they buy small patties already frozen or they make them ahead of time and store them in the freezer. Either way, that's extremely lazy. As a result, the meat had no flavor at all. I added mustard, some barbecue sauce (I had to request this; is it my imagination or didn't they used to have a bottle of sauce on every table?) and some chopped pickle. This did not help at all. I only ate one of my sliders.
-
It was the meal that I was expecting: not bad (other than my sliders) but not good either. We used up all of the gift card and I even had to add a few dollars from my pocket for the tip. (The service was very good, much better than the food.) Unless someone I know gets another gift card, I doubt I will ever return to Claim Jumper.
Posted by JustinM at 3:03 PM