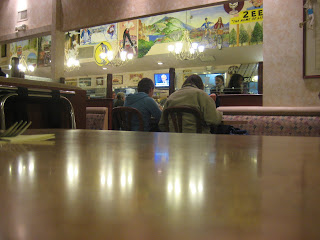 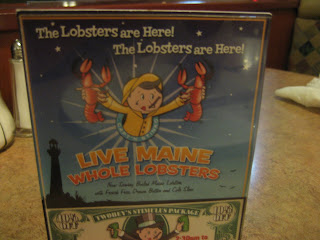 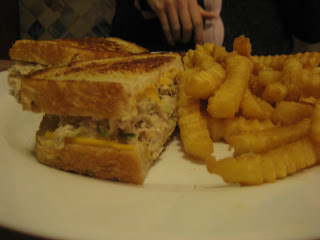 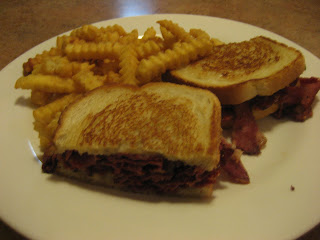 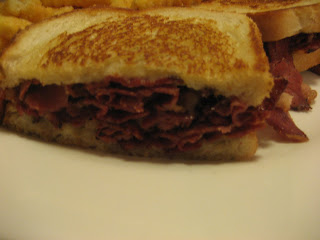 The other rainy night, while driving around trying to decide what to have for dinner, Elizabeth said she felt like mashed potatoes. I started thinking of places we could go. It sounded like she was in the mood for a diner. We drove by Gus's but it was pretty packed, so I suggested Twohey's. I hadn't been there since high school, and I think I only ate there once, but I remembered it as a pretty straightforward place.

After trying to navigate the In-N-Out parking lot - always packed on a Friday night but particularly painful in the rain - we just parked a couple blocks away and walked. As soon as we walked in I was put in a good mood. I don't love diners like Elizabeth does, but there is a definite comfort in the touches a good diner has, and they were all present here: the high school kids in their school football sweatshirts; the old couples who have obviously been coming here for decades and possibly never changed their order; being quoted a "ten minute wait" that really only takes two minutes; the overweight teenager talking in a voice loud enough for half the restaurant to hear (I knew at some point he would start talking about Star Trek, which, of course, he did.) We were in one of the largest metropolitan areas in the entire world but we could have been in the middle of Nebraska and we would have seen an identical scene.

Twohey's was having a "Maine Lobster Special" for $26.95. Ignoring the fact that there was no way the lobster would be as good as the Crab Cooker, there seemed something very wrong about coming to Twohey's to have comfort food and ordering a lobster. Elizabeth ordered the tuna melt and I ordered the pastrami melt. I had a bite of her sandwich; it was probably the first tuna I had tried in 20 years. When I was young I loved it but eventually got sick of it. Her sandwich was pretty good, and I remembered the taste like I had eaten it 20 minutes ago, not 20 years, but I don't think I'm ready to start eating tuna again.

My pastrami melt was just average. It wasn't an expensive sandwich but I still thought it was pretty skimpy on the meat, which was also very dry. I love mustard on a pastrami sandwich, though, so I added more than usual. I had been deciding between this melt and the fried shrimp plate, so I had asked the waitress her opinion. She emphatically recommended the melt, but I certainly wish I had tried the shrimp instead.

The french fries were fantastic. I don't know what kind they used, but probably something bought in huge bags from Restaurant Depot. Elizabeth remarked they were the same fries she had in her high school cafeteria. That was fine by me. When I was in high school, every Friday the cafeteria cooked fries and the junior class cooked burgers on outdoor grills for a Prom fundraiser, and it was always the highlight of the lunch week. (It might even have been the highlight of high school, now that I think about it.)

We both washed our meals down with fountain Cherry Coke. It was a very nice dinner. Not great by any means, but then again if it was, it wouldn't have been the classic diner experience.
Posted by JustinM at 3:36 PM