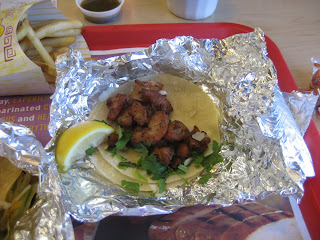 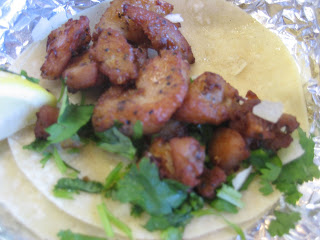 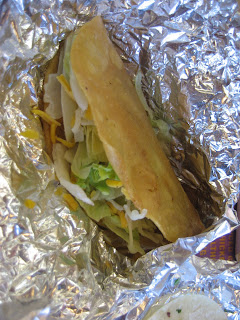 I always enjoy trying new fast food promotions, even though they're usually not very good. El Pollo Loco, however, comes out with pretty decent promotions. Their grilled chicken tortillas rolls were good. Years ago they came out with the "fuego chili orange chicken" burrito that was amazing. Unfortunately, it was only available for a couple months and they haven't brought it back since.

The other day I saw a commercial for "carnitas chicken." I was intrigued, although I had absolutely no idea that carnitas could be chicken - I thought carnitas was always braised pork. Still, it's nowhere near as confusing as Burger King's "chicken fries" or "angry whopper,"and, like I said, I usually enjoy El Pollo Loco's promotions.

Not this time. This was simply one of the worst tacos I have ever had. The small pieces of chicken were full of fat and grease. They were either fried or grilled and then fried. El Pollo Loco claims that these are full of citrus flavor and spices. All I could taste was grease. The website says these tacos only contain 6 grams of fat. I would be willing to bet you get that much in each bite. The filthiest taco truck you will ever find will make you a healthier taco, and probably at half the price.

I also got a crunchy chicken taco, which was nothing special but worlds better than the chicken carnitas. Still, neither is as good as the chicken tortilla roll, and nothing they've ever had was better than the fuego chili orange chicken, which they inexplicably refuse to bring back. I would write them another letter and ask them to bring it back, but my spirit is broken after my failed attempts with McDonald's and the Shanghai McNuggets.
Posted by JustinM at 2:55 PM