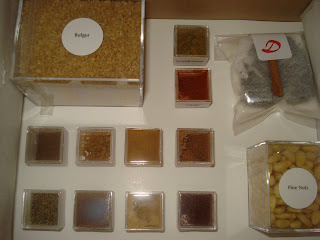 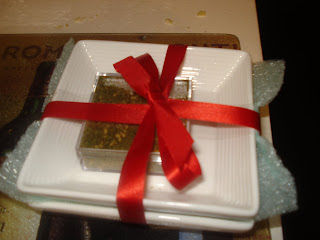 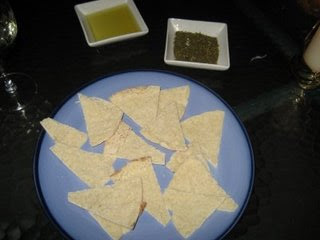 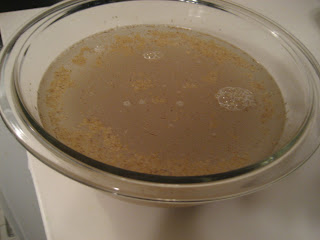 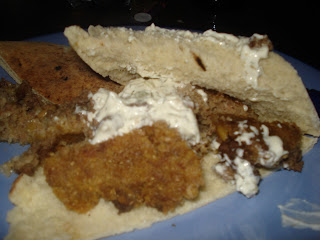 The next in the series of my Destination Dinners was Kibbeh bil-Saneeyeh (baked spiced lamb) from Lebanon. It's been years since I have had Lebanese food. With the exception of Italian, there is not another cuisine with which I have had such a big disparity in the quality of food. I have had shawarma that melted in my mouth and made me almost smack the table with joy. I have also had kebabs that were impossible to bite into and dense, over-fried falafel that would have bounced of the walls like superballs if I had been so inclined to throw them.
My dinner kit included bulgur wheat, pine nuts, and several pre-measured spices, including cumin, fenugreek, cloves, cinnamon, sumac, ginger, and several others. I also received two mezze dishes with a packet of za'atar. I had to buy pita bread and a pound of ground lamb. (It also gave me a shopping list of ingredients and a recipe for tzatziki sauce, but I found it cheaper and easier to just buy a container of garlic tzatziki from Whole Foods.)
I made dinner for my friends Tracie and Elizabeth (although three other friends dropped by when they heard I was making this for dinner.) The traditional adult beverage with Lebanese food is Arak - an aniseed-flavored liquor that often is more than 90% ABV. That sounded like a recipe for disaster - especially when we all had plans for the Super Bowl the next day - so we instead stuck with Trader Joe's wine. (Although my friend Jim brought over a couple six packs of MGD 64, which is surprisingly good.)
First, I cut up some pita bread and put out the mezze dishes with olive oil in one and the za'atar in the other. You dip the bread in the oil and then the za'atar. This was delicious. (You don't have to eat too many Mediterranean meals to understand why Americans are so fat; the night before my appetizer had been fried mozzarella with a mayonnaise sauce.)
I soaked the bulgur wheat in water for about twenty minutes, during which the wheat absorbed a large amount of the water. I mixed about half the lamb with the wheat and cooked the other half with pine nuts in a pan. I layered half the lamb/bulgur mix in a pan, covered it with the lamb/pine nuts, and layered the rest of the lamb/bulger on top. Then I baked it in the oven for about 45 minutes.
We made pita sandwiches with the tzatzki sauce. They were very good, although we all agreed some red onion and lettuce would have made them much better. Overall it was a nice meal, but definitely not as good as the pineapple chicken dinner from Thailand.
Posted by JustinM at 1:50 PM

Hot diggity damn, that was a good meal.

I'm keeping my fingers crossed that the next (and final) one will be the Korean bulgogi or the Jamaican jerk chicken. I'm hoping it's not the jambalaya. I love jambalaya, but it's not exactly as exotic as the others.

You're in luck. The next kit is one of the two you mentioned!

Awesome. I want to try both of those so much that whichever one I do not get I will also buy from you in the future.