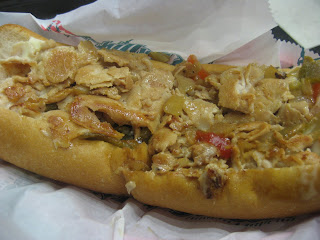 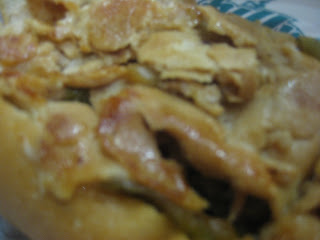 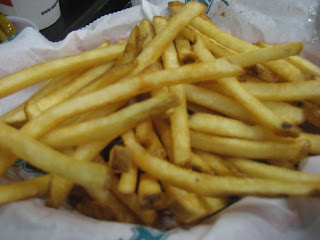 The other night I agreed to continue the search for a bridesmaid dress that I mentioned in the post about Jake's Roadhouse. Before that lunch we had gone to the David's Bridal in Duarte, which was a nightmare. Not a single person there tried to help us and there was not a single dress in my friend's size. So I offered to go with her to the David's Bridal in Burbank. Except it was pouring down that night and traffic was bad, so she did not want to drive home and then have to drive up to Burbank. I volunteered to meet her in Hollywood, where she works, and drive up to Burbank with her.

She offered to buy me dinner anywhere I wanted. I ran through all the options: Mozza? Hungry Cat? Ruth's Chris? But then I realized what I really wanted: a hot cheesesteak, fries, and to watch the Lakers game on the flatscreen TV at Philly's Best. What could be better than that?

Every time I have eaten at Philly's Best - which is getting more and more frequent these days - I have had the same thing: the Philly Pepper Steak with cheese. I had never tried the chicken. If ain't broke, don't fix it, you know? But I was curious.

It was fantastic. I added a few hot peppers, as usual. I gave my friend - who is also a huge fan of the steak - a taste, and she agreed it was great, much better than expected. Of course, it wasn't as good as the steak, but still a nice surprise. My fries were the best I have ever had there.

As usual, I only ate half my sandwich and took the rest with me, either to eat later that night or for breakfast the next day. This time it was the latter. Unfortunately, the chicken does not reheat as well as the steak. The steak sandwich is almost better the next day when toasted in the oven. The chicken is nowhere near as good.

The chicken sandwich was a one-time thing. It was really good and if Philly's Best only offered chicken sandwiches I would still eat there frequently. But that steak is just too damn good to pass up ever again.