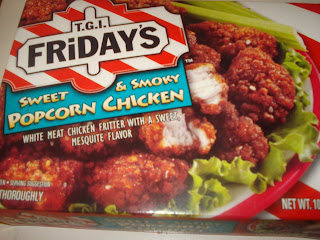 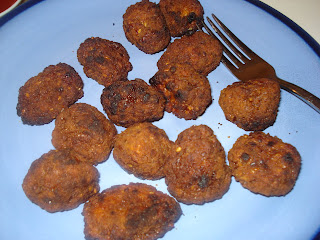 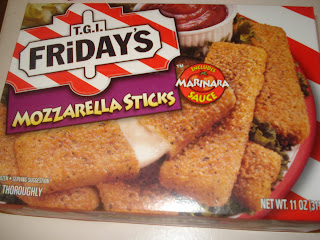 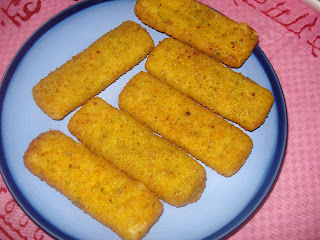 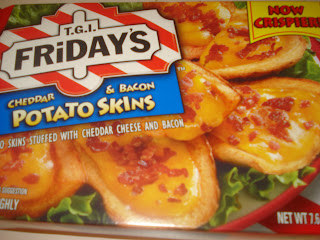 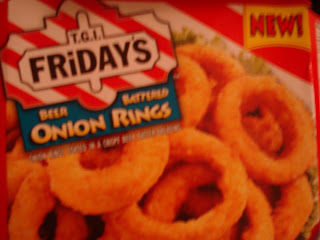 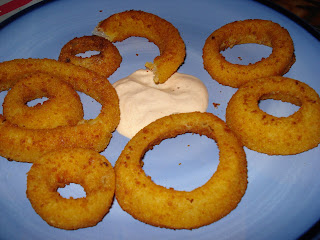 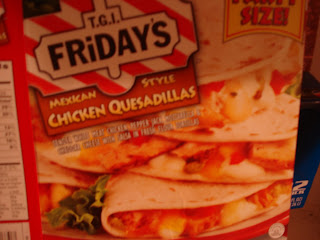 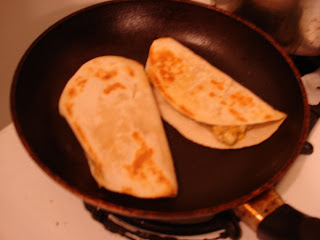 I have been to T.G.I. Friday's restaurants four times. Once I had a very good pulled pork sandwich, but the other three visits were all terrible. Years ago, when I saw they were coming out with a line of frozen snacks, I shuddered and thought 'well, there's some food I will never try.'

My friend Elizabeth loves fried cheese, though. It's not only her favorite food in the world, it's probably her favorite thing in the world (other than her cat, which makes sense, and her framed Don Mattingly poster, which does not.) So one day I decided to get a box of TGIF fried cheese and see how it is. We both thought it was surprisingly good.

Last week Ralph's had most of the TGIF snacks on sale for $1.97 each (the normal price is about $4.99.) I decided at that price I should give several of the items a try and see how they taste.

The "Sweet & Smoky Popcorn Chicken" was my favorite of the bunch. The chicken was white meat, the breading was really tasty, and was actually both sweet and smoky. (I know that's what it's called, but I expected them to be lying; years ago my brother and I ate at TGI Friday's in Boulder, Colorado, and had items with their barbecue sauce that they proclaimed was "the best ever," and we both felt sick after lunch.)

The mozzarella sticks were again good. I like the marinara sauce that comes with it but Elizabeth does not like it at all. Every time we have had these cheese sticks together she uses Ken's Steakhouse honey mustard, which is also great.

The cheddar and bacon potato skins were also very good. Unfortunately I do not have a picture of them. I was making dinner for Elizabeth and my friend Tracie and I made them as a snack while dinner was cooking; I was so preoccupied with making sure I didn't screw up dinner that I didn't stop to take a picture.

The beer battered onion rings were lousy. They were mostly breading and little onion, and even though I fried them, the breading still tasted rubbery and not crispy. I will never eat these again.

The Mexican-style chicken quesadillas were good and bad. The chicken, cheese and salsa was all very tasty. But there was hardly any of it. If I had combined the filling out of both quesadillas into one, it would have been acceptable. But I had to put some barbecue sauce and cilantro in each of them so they weren't so dry and empty. These are definitely not worth the full price.

If Ralph's ever puts these items on sale again for such a low price, I will get more of the popcorn chicken and potato skins. And I will probably always get the fried cheese. But I will not have the onion rings or quesadillas again.