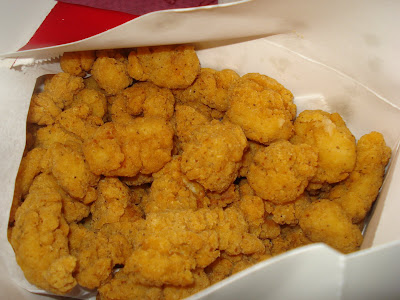 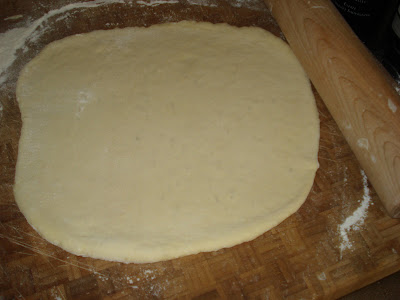 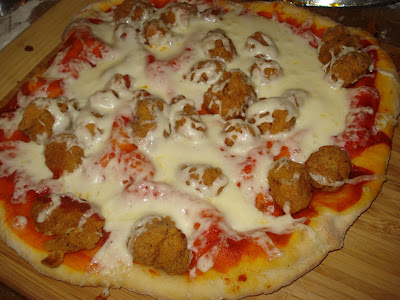 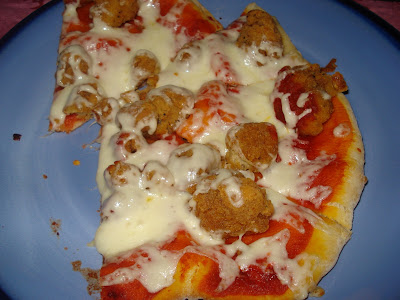 Sunday night I offered to take Elizabeth anywhere she wanted for her birthday dinner. Names thrown about were Parkway Grill, Gale's, Yujean Kang's and the dining room at the Ritz. (Yes, I know it's called the Langham now. Not to me. Just as Costco will always be Price Club, the Langham will always be the Ritz.)

She chose picking up dinner from KFC and watching The Simpsons. It was her birthday, so I couldn't refuse. We got a family size popcorn chicken (great), a couple of buffalo snackers (average), and a tender roast sandwich (completely inedible; the toughest piece of chicken I have ever bittend into, without exaggeration.)

This was only my second time ordering the family size popcorn chicken. The first time was June 2, 2002, the day of the epic Lakers vs. Kings Game 7. My friend Zach and I had convinced ourselves that getting KFC popcorn chicken, drinking large bottles of Miller High Life, and watching Hoosiers before each Lakers game was the key to their victory that spring. I'm not sure if we were correct, but I am sure that we haven't done that since and the Lakers haven't won a title since.

The family size was much bigger than I remembered. We barely ate half of it, and put it in the fridge. The next evening I decided to try something that I had in my mind for a few months: a popcorn chicken pizza with buffalo sauce. In my mind I wanted to make it a complete play on buffalo wings, with celery and carrots. But I didn't have any, so I just used what I had.

I halved a package of Fresh & Easy pizza dough. Ordinarily I use an entire package for each pie, but I wanted to try a thinner crust. After letting it heat for about 5 minutes in the oven I added some buffalo sauce and the popcorn chicken, let that cook for another 5 minutes, then added the mozzarella for another couple minutes.

The pizza was very good, but a little on the dry side. I definitely should have cut the larger pieces of chicken in half, and probably added a little more sauce to the top of the pizza when it came out of the oven. It also would have been nice if I had had carrots and celery to sprinkle over the pizza. It would have been a bit unorthodox, but visually impressive, and most likely tasty. Next time.
Posted by JustinM at 3:01 AM

Wow. Sounds delish. I like my pizza on the thin, crispy crust side too.

The Langham sounds like a body part you wouldn't want to put your tongue near. For me too, it shall always remain The Ritz.

I once stayed at the Cock Hotel in Buckinghamshire, England.