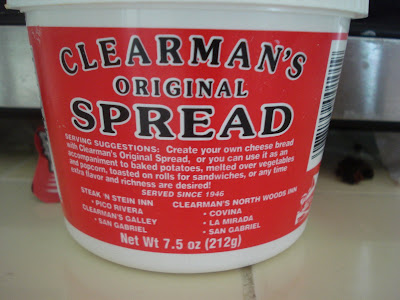 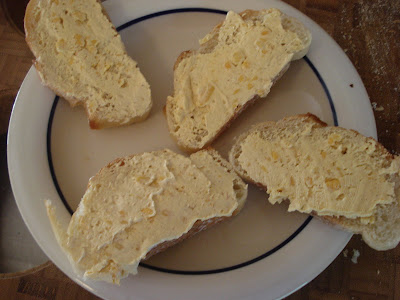 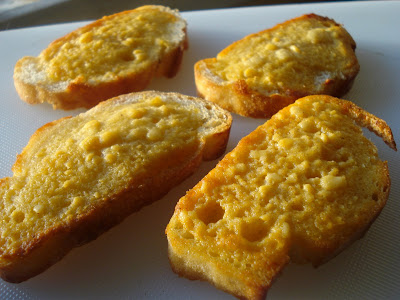 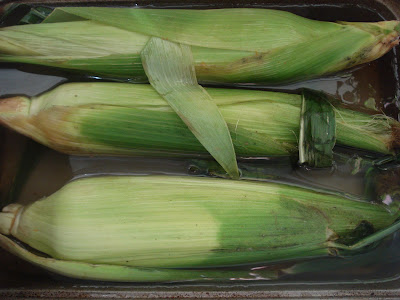 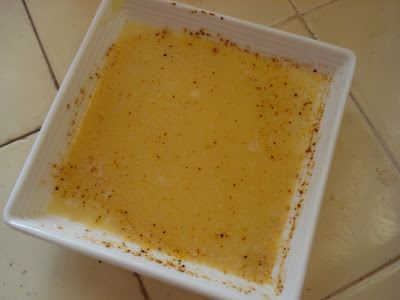 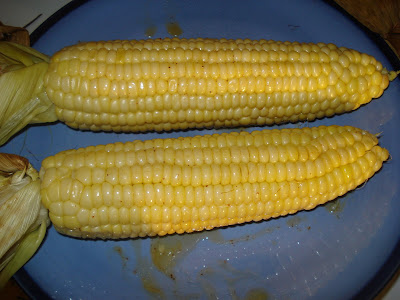 If I were to make a list of Elizabeth's top 10 favorite things, the first 3 would be easy: her cat, watching Scrubs reruns, and smelling every potent item on display in Jacob Maarse. But numbers 4-7 would be some order of the following: cheese, butter, and garlic. (In the last couple months the Yankees have dropped down to around number 117 .)
-
So it was with an (unfortunately, not surprising) amount of stupidity that I realized at lunch a couple weeks ago at North Woods Inn that I had never made, or even mentioned, Clearman's cheese spread to her. While waiting for her to get home last night, I prepared some of it. I was hoping she would love it and be appreciative and then, as the evening wore on, she wouldn't mind if I watched basketball and then Huell Howser. I'm half-kidding; I could have crusted the slices of bread with 24 carat diamonds and she still would not have enjoyed me watching Huell. But I was hoping it would at least earn me a free pass to watch the Lakers-Rockets.
-
I slathered the cheese spread over some sliced bread and put it in the oven for about 5 minutes. The traditional way of doing this involves putting it under the broiler. It still tastes good that way, but the bread doesn't crisp up and you end up with a soggy piece of bread drowning under a sea of slightly-charred cheese. That's not necessarily a bad thing, but I prefer a crispier piece of bread and golden-toasted cheese. It had been a long time since I'd had these and they were awesome. Elizabeth didn't like them as much as I did. I suppose this is one of those tastes it's important to have grown up with. (My friend Mick grew up in England and still insists that spotted dick is delicious; I think it looks like the most foul food imaginable.)
-
We also had some sweet corn from the farmers market. Years ago I saw a recipe on Food Network that calls for soaking the corn in water for about an hour and then roasting it - husks, silks and all - in the oven for 40 minutes. When I don't feel like lighting up the grill, this is what I do. While the corn was soaking, I mixed up a butter of lime juice and chili powder. When the corn came out of the oven I rubbed it down with butter. It was fantastic. Of all the things I love about the farmers market, fresh sweet corn that was picked earlier that morning is my favorite.
-
The Lakers played another one of their typical, no-defense games, and got embarrassed. Again. This is without question my least favorite Lakers team ever.
Posted by JustinM at 12:55 PM