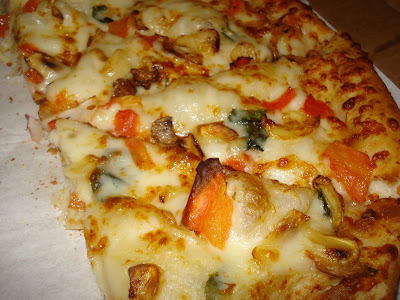 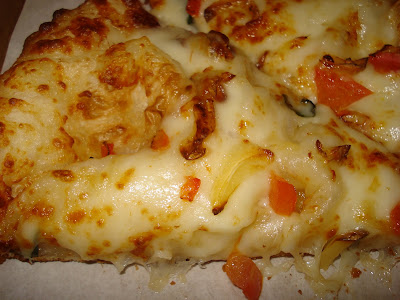 I was watching the Lakers-Rockets and Angels-Red Sox games when my friend Tracie called and said she was on her way home and was going to stop by the new Garlic Jim's to give their pizza a try, and she wanted to know if I wanted anything. I had already eaten, and I was nervous that the Lakers would give another completely gutless performance like they did Sunday, and that the Angels would give another completely gutless performance like they do every time they play the Red Sox. So I declined.

A little while later I got an email from Tracie saying that she really liked the pizza and that it was full of garlic in every bite. She said she had half the pizza left and she would leave it in her fridge for me to take the next day. I (only partly jokingly) said I wanted it now, so she walked the 100 yards from her place to mine, showing up with a pizza in one hand and pint of Fat Tire in the other. She really is the coolest.

She got the "Queen Margherita" pizza: fresh basil and olive oil with roasted garlic and tomatoes. I've never been a huge fan of pizzas without pizza sauce; I always find them too dry. This one was different. The dough was very airy and it didn't need any heavy sauce. The olive oil complemented it very nicely. And there was garlic in every bite.

I liked this pizza very much, and I will try another one of their pies in the future. However, I do not see myself becoming a regular customer, for two reasons. First, she paid $15 just for a medium pizza. I may have seen smaller "mediums" in my life, but I can't remember when. But, most importantly, it is nowhere near as good as Mamma's Brick Oven, which is about 100 feet away from Garlic Jim's.

The Lakers crushed the Rockets by 40 points. The Angels, in classic fashion, blew another one against the Red Sox. The Angels were up 3-1 in the 8th inning but the bullpen blew another lead. Inexplicably (well, actually I can't use that word when it comes to Mike Scioscia when he manages against the Red Sox) Scioscia allowed Scot Shields to pitch in the 9th inning. Scot Shields is my least favorite Angel of all time. The higher the stakes, the more likely he will throw boneheaded pitches. He entered the game with a 7.82 ERA. In the last three years his ERA against the Red Sox is 8.44. And yet Scioscia still allows him to pitch against them. All too predictably, he gave up a run in the 9th to lose the game. Thanks, Mike. Thanks, Scot. Another completely chickenshit performance from both of you against the Red Sox.
Posted by JustinM at 3:00 AM

I have to go there. That looks so good! Partly because it's pizza with garlic and partly because I forgot to eat dinner tonight....

You really need to make trying Mamma's your first priority.