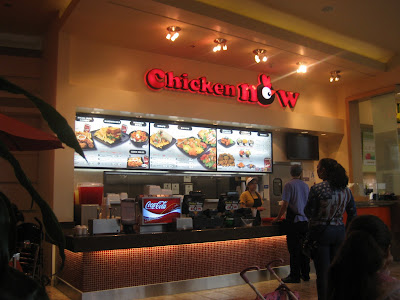 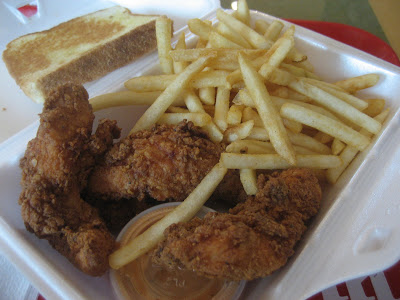 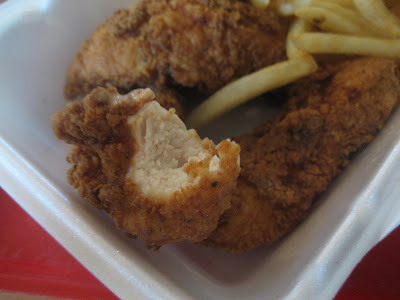 I do not remember the last time I ate in a mall food court. The one at the Santa Anita mall has always been particularly bad; it is telling that the longest line is usually at McDonald's. I rarely go to the mall anymore but every time I do it seems there is some new place open in the food court and some teenager standing in front of it holding a tray full of chicken on toothpicks.

The other day I returned a tuxedo to Mens Wearhouse and needed to look for something at Borders. I saw that "Chicken Now" was open. Months ago I read about Chicken Now and it at least sounded interesting, if not exactly to die for. They claim that their chicken is never frozen, marinated for at least 24 hours, and cooked to order. And all they sell is chicken. They don't sell hot dogs or hamburgers or slices of pizza that have been sitting out for hours. This doesn't necessarily mean that the chicken is good, but it is refreshing to see a place sell themselves on the quality of their food and not their free Star Trek toys or the ease with which you can dress like a pregnant woman and sneak their nachos into a ball game.

I decided I should give them a try. I ordered their #2 combo - three chicken tenders, fries, a piece of toast, and something perplexingly called "Grandma's Sauce." The girl behind the counter asked if I wanted the chicken grilled or crispy; I chose crispy, of course. It took several minutes for the food to be ready, which I did not mind.

The chicken wasn't really crispy, although it had certainly just come out of the fryer. There were parts of it that were crispy, but overall it was more of a soft breading. But I did not care, because the chicken was really good: fresh, juicy, big pieces. The Grandma's Sauce was nothing special; as far as I could tell it was mayo, sour cream and spices. The chicken did not need any sauce, though.

The fries were your basic fast food, previously cooked fries. In other words, lousy. If Chicken Now were to take the approach of Wingstop and cut fresh potatoes for their fries on a daily basis, I could see them becoming a legendary place. Or at least the best place in the food court.