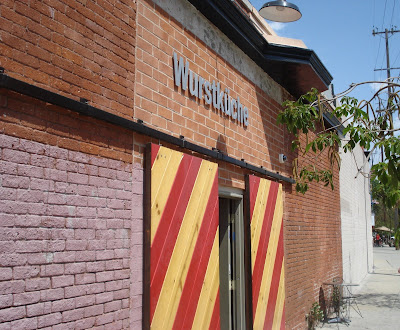 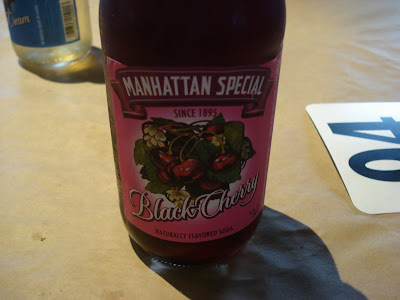 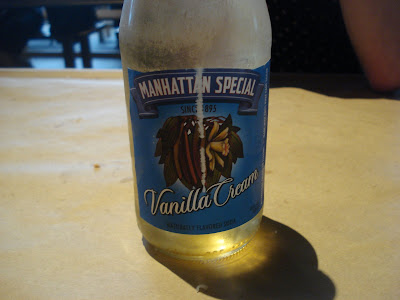 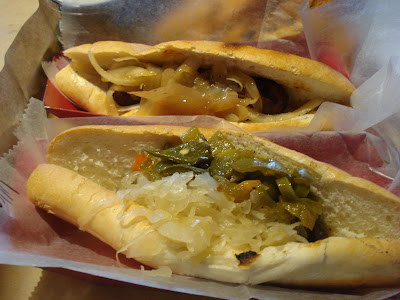 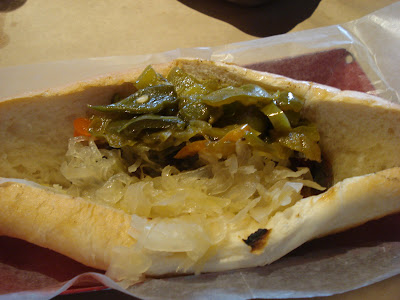 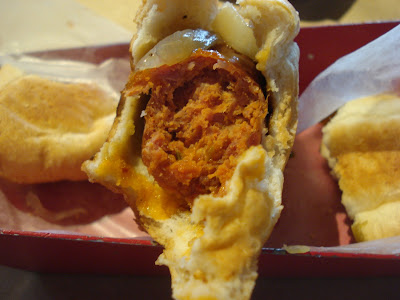 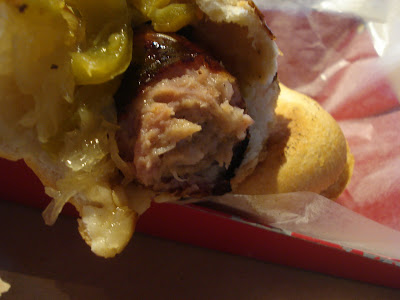 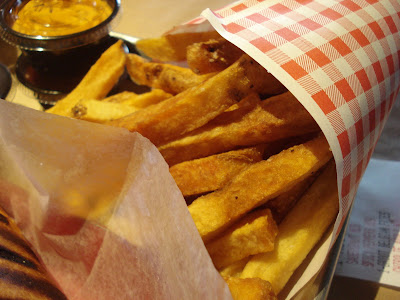 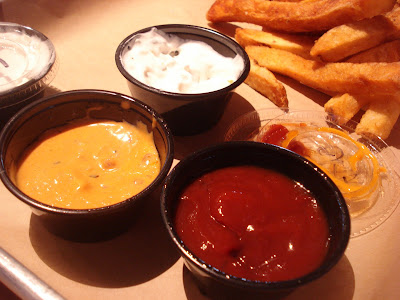 There is pretty much nothing in the world better than grilled sausage. Some of my friends hate the Lakers, some hate Dylan, one of my best friends hates condiments of any kind, and some (actually, most) of my friends are USC fans. But one thing we can all agree on is that there is no occasion that isn't made better with a grill sizzling with hot sausages and a cooler full of cold beer. Even my vegetarian friends admit that grilled sausage is pretty damn cool.
-
So when I heard about Wurstkuche, serving about 20 different kinds of sausage, a couple dozen beers on tap, and Belgian fries, I knew I had to try it. To start off the holiday weekend I picked Elizabeth up from work and we headed down to Third Street for a late lunch.
-
Wusrstkuche is divided into the front, where you place your order, and, separated by a long hallway, the back room, resembling a beer hall with long, communal tables and a bar. It is definitely a cool idea for a restaurant. Of course, this being L.A., it comes with a price: before ordering you have to deal with a long line, filled with a cringe-inducing amount of hipsters. The kind who wear skin-tight jeans, ties with t shirts, and sunglasses indoors. (My favorite of these characters had on a tie slung around his v-neck t shirt and another tie wrapped around his pants as a belt.) It took us about 15 minutes in line to place our order (although from what I've read this could be considered a short wait at Wurstkuche) and another 20 minutes to get our food.
-
Since this was Friday afternoon and we planned to go out for a couple happy hour drinks later on, I wasn't in the mood for a beer. Fortunately, they have a great selection of sodas that you can't find at the supermarket. I got a Manhattan Special Black Cherry Soda; Elizabeth got their Vanilla Cream. I don't think I've ever had these before, and they were both great. We also got a couple glasses of water from a nearby dispenser. It turned out to be cucumber water, something I haven't had in a long time but went very well with the food.
-
When the server first put my food in front of me I laughed: the sausage had shriveled up to about 3 inches. It took up less than one-third of the bun. ("You've got one shriveled wiener," Elizabeth pointed out, somewhat harshly.) I understand sausages shrivel a little when you grill them over an open flame, but this was ridiculous. I paid $6.75 for something that I can eat in two bites?
-
Still, my sausage, the "Austin Blues" (smoked pork with spicy peppers) was phenomenal. I wish it had been bigger, but what I did get was one of the best sausages I have had in a long time. I ordered it with sauerkraut and spicy peppers, which were indeed spicy. Elizabeth declared her sausage, a smoked turkey sausage with jack cheese and jalapeno, "probably the best sausage I have ever had." She had caramelized onions added to it; I tried a bite and loved them.
-
And then there were the fries. I have spent a significant amount of my adult life chasing after the fries I loved from the long gone Dive! in Century City. Perhaps those fries weren't really that great, but in my mind there will never been any better: long, crisp pieces of potato, served in cones with two dipping sauces. The rest of their food wasn't anything special and every so often the whole restaurant would jump into a mode resembling a submarine diving, a truly annoying thing, but there really wasn't anything better than those fries.
-
That being said, if Dive! somehow sprang back to life for one afternoon and I had to choose between eating their fries again or another round of Wurstkuche's... I would choose the latter. These were nothing short of perfect. Over the years I have bent the ear of two Belgian acquaintances of mine, both chefs, on just how to properly make Belgian fries. I would try and try and no matter what new advice they gave me I could never get them to turn out how I wanted. It's irrelevant now, as I know I can come to Wurstkuche and get my idea of perfect fries.
-
The large fries (of which we each got an order; way more than we needed) are served with two dipping sauces from your choice of a dozen. I chose chipotle aioli and chipotle ketchup (I love chipotles so much I will even try a Wienershnitzel product if it has chipolte in it.) Elizabeth ordered two of the tzatziki sauce. The chipotle ketchup wasn't anything special but the other two sauces were excellent. Next time I will try something else, perhaps the blue cheese walnut and bacon that a friend of mine recommends highly.
-
I will be back again, most likely to try one of their "exotic" sausages. The alligator & pork or rattlesnake & rabbit sausages sound tempting, but I have my eye on the buffalo, beef & pork with chipotle peppers. And definitely some more fries.
Posted by JustinM at 11:00 AM

uhm...How about an address so I know where to find these amazing fries!?

It's already really crowded there. I don't want to encourage more people who can't even be bothered to use google maps.

i looked at the menu a few weeks ago and it looked like most of the sausages are also very similar to those you can purchase at harmony farms in la cresenta without the hipster attitude. (bonus- harmony farms has tons of other amazing meats!)

Thanks for the tip, Miriam! I have never been to Harmony Farms, although years ago my boss killed a wild boar on a hunting trip and had Harmony make sausages out of it, and they were great. I will definitely check that out. Of course, I still need the Belgian Fries, because the ones Wurstkuche makes are better than I have ever made.

Yum! I always have lovechipotle anything as well!