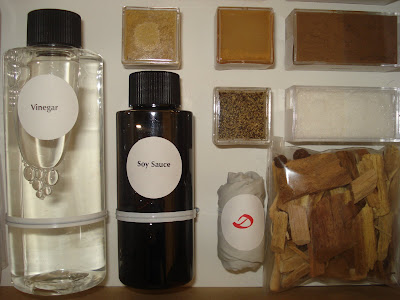 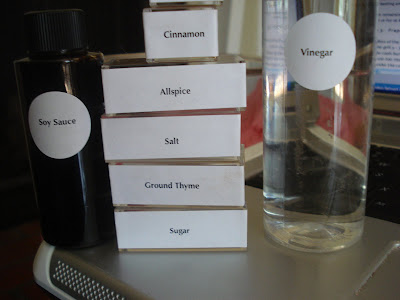 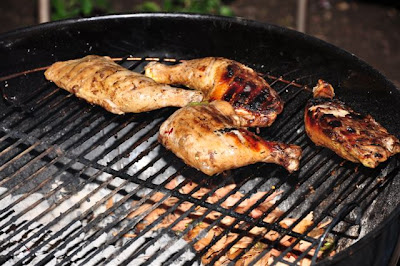 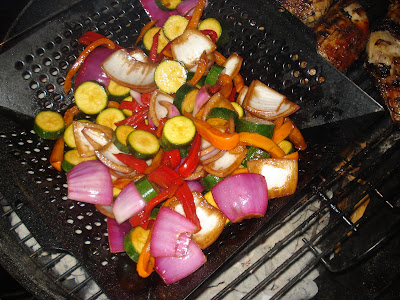 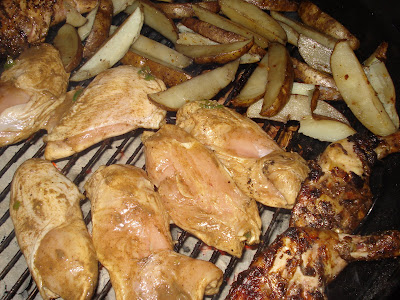 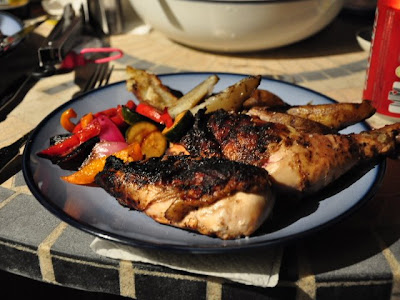 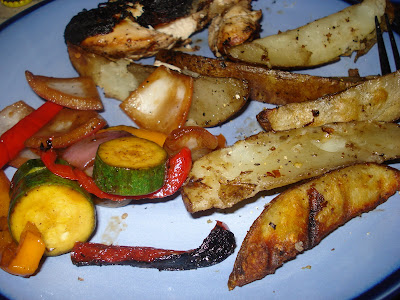 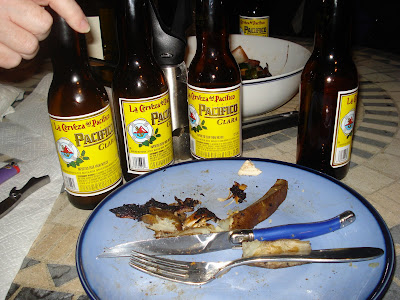 The last of my Destination Dinners - my amazing Christmas present from Elizabeth - was a jerk chicken recipe from Jamaica. I received it in March but, unlike the Thai pineapple chicken or Lebanese baked lamb, I wanted to be able to cook it outdoors on the grill, to invite a few friends over to sit around on a hot Saturday with sweating bottles of Pacifico and Red Stripe and relax while the food cooks.
-
In the late 19th century, traders from Boston, Massachusetts began importing bananas from the area around Boston Beach, Jamaica. This is how the beach got its name. The style of "jerk" cooking originated in this area. This got its name because Boston Red Sox fans are jerks. (This might not actually be true.)
-
Jerk cooking involves dry rubbing spices over a piece of meat and grilling it, ideally over an aromatic wood. The dinner kit included almost all of the necessary spices, and even the wood. In addition to the chicken I needed to buy some hot peppers, as these are traditionally used in true jerk cooking. (Especially the Scotch bonnet, one of the hottest peppers in the world.)
-
I let the chicken sit in the fridge overnight with the spices. I bought quite a few vegetables at the farmers market to grill, and cut up some potatoes. My friends Carla, Jim and Rachel joined Elizabeth and me for dinner.
-
Once I got the fire going I grilled the chicken legs over indirect heat, over the wood chips. I cooked the vegetables in a grill basket with olive oil. Earlier in the day I had cooked the potatoes part-way in the oven, then rubbed them with some jerk spice and let them cool. When the vegetables were off the grill I cooked a few chicken breasts and finished the potatoes on the grill to give them a crispy outside and some grill lines. I doubt grill lines make food taste better, but it sure seems that way. (Anyone else remember the Texas grill Fritos? I never bothered to ask why corn chips would have grill marks on them, but damn they tasted good.)
-
By the time we sat down to dinner we had finished all the Red Stripe, so it was on to Pacifico, which also went beautifully with the meal. Everyone loved it. I mean loved it. My friend Jim said "this might be the best chicken I have ever had." Nobody had any food left on their plate. This was the best of the Destination Dinners. I certainly see more of them in my future.
-
When I got this present, I didn't think I would love it as much as my own olive oil that I got last year, but after cooking these three meals, I would have to say that I do. There are very few things in life that are better than sitting around with a few friends on a hot Saturday evening, eating a meal cooked on the grill.
Posted by JustinM at 1:00 PM

This was by far my favorite of the dinners. Excellent doesn't seem to cover just how truly good it was.

Sounds like some good pollo. I want this for my meal next Birthday...

No, really, I think that was the best chicken I've ever had. It was an absolutely fantastic meal. Jim

Ok, now I'm a little peeved that the Dead had to schedule their Los Angeles show on the same night you made this. It looks absolutely fantastic, I'm bummed that I missed it.