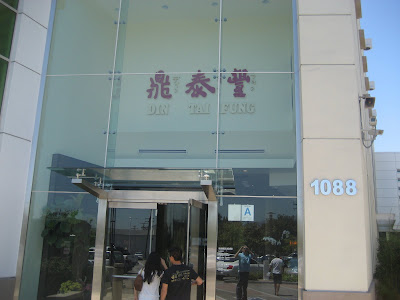 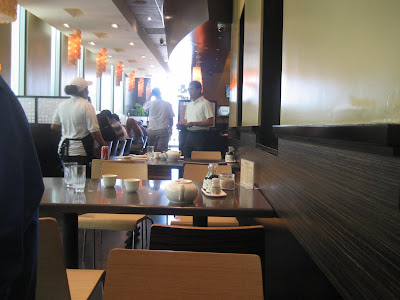 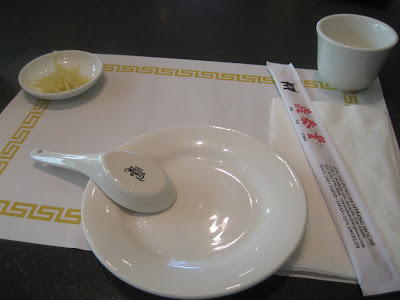 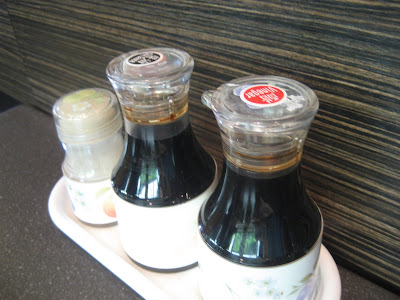 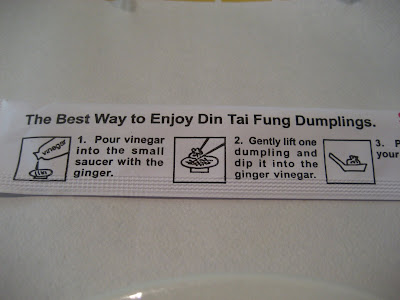 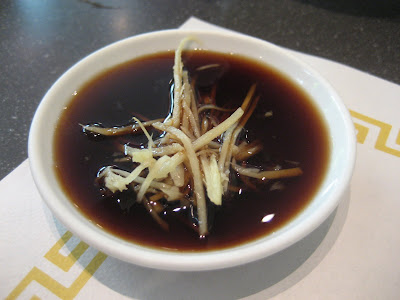 There are some culinary memories in my life that are absolutely indelible. When I was 17, in Rome, I ate a crustacean with giant eyes staring up at me. I first ate the cooked-in-lard fries at Arthur Bryant's in Kansas City in February of '02; I stuffed myself to the point that it hurt to walk and I immediately went back to the motel and took a 6 hour nap. I will never forget my first cup of Dunkin Donuts Iced Coffee (October '04) and how it was every bit as good as my East Coast friends promised.
-
And if I live to be 100, I will still remember my first juicy pork dumpling from Din Tai Fung. It was the best dumpling I had ever had. Actually, that's not true; the second one was the best dumpling I have ever had. The first one I had dipped into a dish of black vinegar and ginger then bit into. It was unquestionably the hottest thing I have ever eaten and it scalded my tongue, my gums, and made my teeth ache. (Two of the three friends with whom I was having lunch were dentists, but as I recall the sum total of their advice was "Be more careful next time.")
-
So I waited a couple minutes and repeated the process, bathing the dumpling in Chinese black vinegar - something that complements dim sum much better than soy sauce - and took a small bite. The broth was better than any soup I have ever had and the pork melted in my mouth like a porcine cotton candy.
-
Of course, the only days back then that I could make it in for lunch were on the weekend, and the waiting time on the weekend can be excruciating. I once went on the day after Christmas and waited two and a half hours. Was it worth it? Always. But at the same time, the idea of dedicating several hours on a weekend morning to waiting in line in a tiny parking lot - and unlike other dim sum places there is no alcohol to drink while you wait - did not appeal to me.
-
A couple years ago Din Tai Fung expanded, adding another wing on the north side of the building, cutting the wait time drastically. The new room is more spacious, with better lighting, and that's where I prefer to eat now. When my brother called me a few days ago and asked if I wanted to go to lunch with him and our buddy RB, I jumped at the chance and told him I would meet him on the north side of the building.
-
We settled in and poured ourselves some tea and starting checking off what we wanted to order. My brother selected three orders of dumplings. "Those are all for me," he said. I suggested we get some green beans, some shaomai, and a couple of other items. We had selected 6 orders of dim sum. "That's 60 dumplings," the waitress told us. "Yes," I said, "we're hungry." 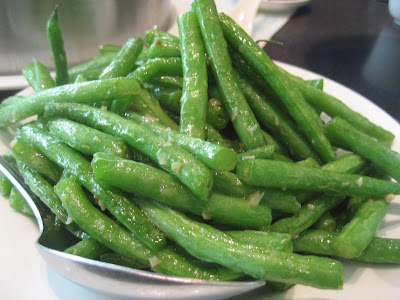 We got our green beans first - soaked in butter and chopped garlic. In other words, the best green beans I have ever had. 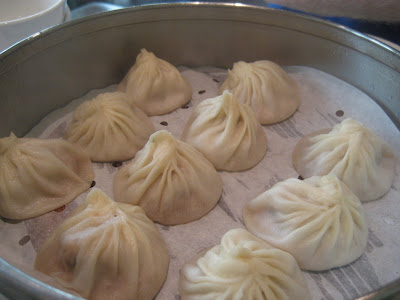 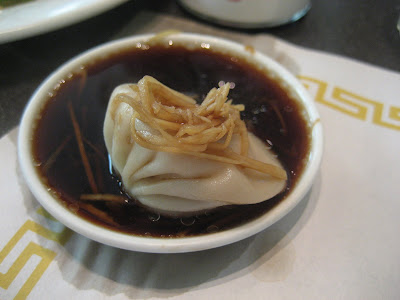 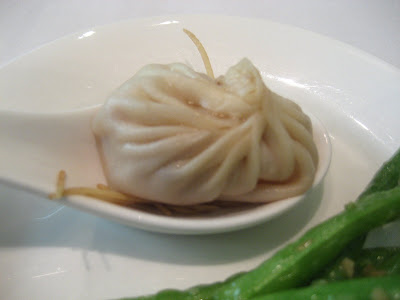 The famous juicy pork dumplings. These are about as good as anything you will ever eat. I set them in the vinegar and ginger for a minute, to let them cool down a little and absorb some of that flavor, then dug in. I have been to Din Tai Fung enough times that I do not need the dumpling-eating instructions that are printed on every package of chopsticks, but I still like to read them. I find them somewhat cute, not to mention a tad bit fascist.

We had three orders of these, and our routine is the same as always: we devour them, turn our attention to the other items, and say "we should have just ordered nothing but juicy dumplings." 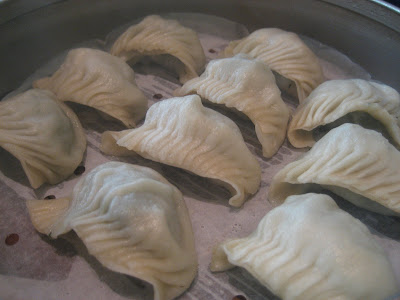 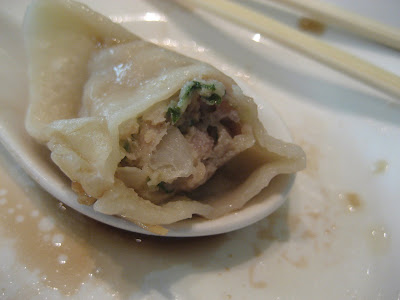 The chicken dumplings. These are very good, and if you had never had the juicy pork dumplings you might even consider these the best you have ever had. But they can't hold a candle to the pork. 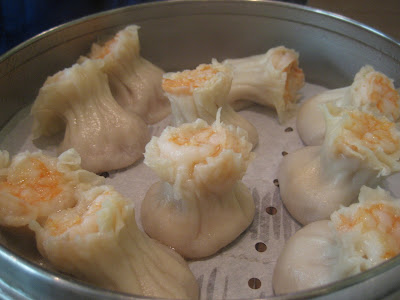 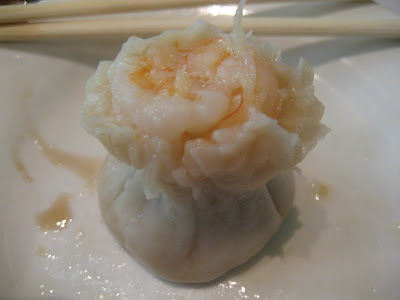 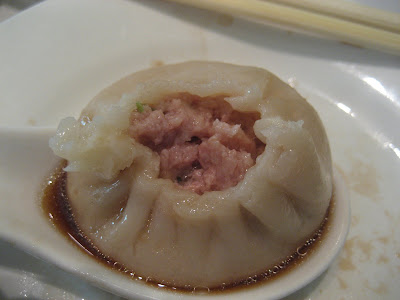 Shrimp and pork shaomai. I let these sit for at least a couple minutes in the vinegar/ginger, then bite off the top and eat the shrimp. Sometimes the shrimp is overcooked, but on this occasion they were perfect. 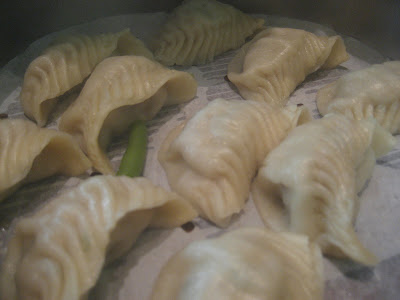 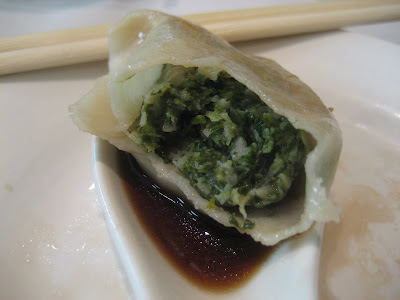 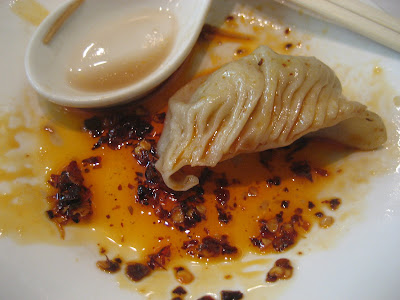 The vegetarian dumplings. I think I've had these before although I don't remember. They were decent, but not particularly good. Compared with everything else we had, they were downright lousy. I only ate two; the first I used the vinegar, and the second I bathed in hot chili oil, hoping to give it some flavor. It sort of worked.
-
Overall it was a fantastic meal. Everyone should try Din Tai Fung at least once. "The problem," as my brother explained, "is that every time I eat here, this is all I want to eat for the next several days. There is nothing that sounds good to me except juicy dumplings."
-
It's a small price to pay, though.
Posted by JustinM at 11:15 AM

I have never had dumplings. But, thanks to this post I want to! They read to be delicious!

Dumplings rock. This is a good place to start.

Quite a problem indeed. I continue to crave them every day since including today....I need dumplings!

Yeah, we always seem to order the chicken dumplings in addition to the juicy pork...somewhere in our brains, we think we're doing ourselves a favor and adding variety. The chicken are fine, but the juicy pork are always the first to be finished.

You know you love dentists.

The one in Finding Nemo and Amy.