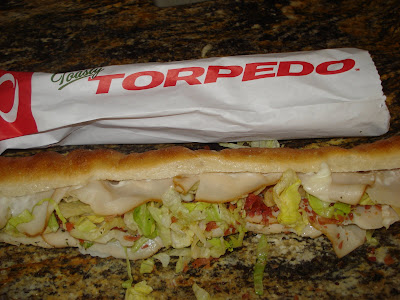 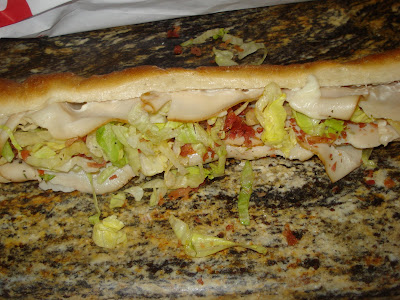 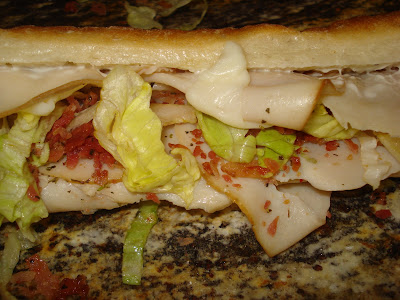 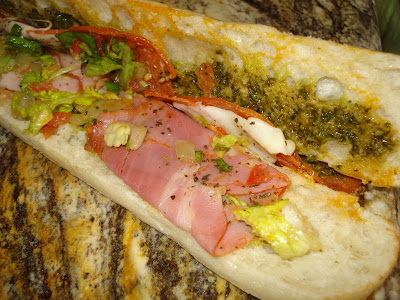 I definitely am a big fan of Quiznos. Despite their annoying idea of coming out with a product called sammies, their food is always good (including the sammies.) Earlier this year they made a point of lowering the prices on most of their menu items. Many people claim they also reduced the quantity of meat they put in each sandwich, but I certainly have not noticed that. Quiznos also has their "Batch 81 three pepper sauce" available at the condiment bar. This is the best pepper sauce I have ever tasted and one of the best condiments I have ever tasted. I once put it and Zankou Chicken garlic sauce on a hot dog; I could not talk for ten minutes it was so good.
-
A couple days ago I went over to my brother's house. He and his coworkers are putting out a book on canyoneering, and he needed someone with some writing and editing skills to look over and proofread the book. Only he couldn't find anyone, so he asked me to do it. Around lunch time he went out to Quiznos. Having never tried the Torpedo, I asked for the turkey club with no tomato.
-
I was impressed with the sandwich when it arrived. It is definitely over a foot long, like the commercials claim. The bread was nice and soft. The only annoying thing was how flimsy it was. It was hard to handle and fell apart, even when picked up with two hands, sending lettuce and bacon bits all over the counter. But it wasn't a big deal, especially after the first bite: the sandwich was delicious. I became angry at myself that I waited so long to try one.
-
And my brother had actually picked up a container of the three pepper sauce for me. I don't know if I'd ever mentioned to him how much I love it, but he still got some for me. The sandwich was so good that I briefly considered not adding anything else to it. But I still slathered the pepper sauce all over it.
-
My brother had gotten himself the Italian torpedo, getting it with pesto sauce instead of the red wine vinaigrette that usually comes on it. When he stepped out of the room to answer a phone call I did not hesitate to take a bite of his sandwich. It was even better than mine. I will definitely be trying both of these sandwiches again. perhaps as soon as this weekend.
Posted by JustinM at 9:38 AM

That explains why I wasn't full after finishing it. I felt like I was one bite short.

I ate 70 dumplings at Ding Tai Fung today. No joke.