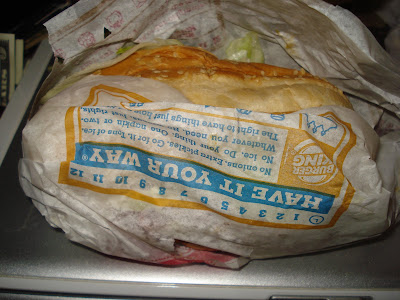 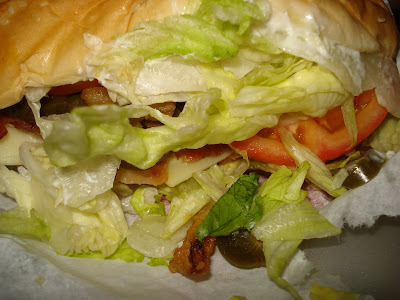 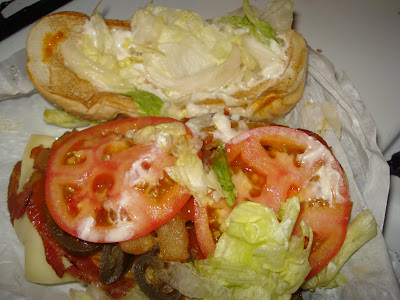 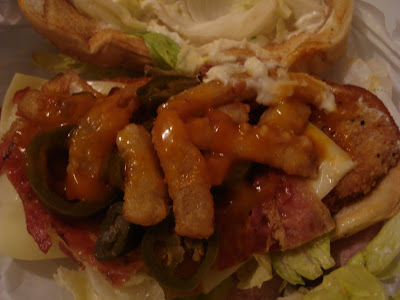 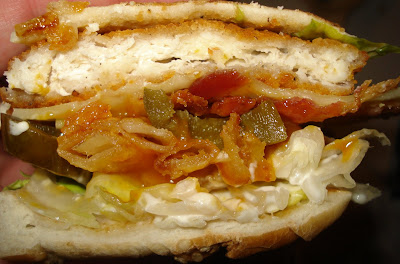 It was a great weekend. UCLA beat Tennessee. The Angels won their series with the White Sox. For the first time in weeks the mountains didn't look apocalyptic with smoke. And for the first time in at least half a decade I got to see my friend Carla three nights in a row. The only thing that could have made the weekend better would have been if I could have forced Elizabeth to watch a clip of Huell Howser skydiving. (Oh wait - I got to do that, too.)

And it was a great weekend for food. I went out with a friend Friday night, I went to one of my favorite places in Pasadena for lunch Saturday, and Saturday night we had a couple friends over and made pizza on the grill. One of them said it was the best meal of mine that she has ever had. But that's not what I'm here to write about. I'm here to write about Burger King. ("But that's not what I came to tell you about. Came to talk about the draft.")

I'd already decided that I wasn't going to be too harsh on this sandwich. What would be the point? I've written many times about disliking Burger King; I didn't see the need to write any more. It's the same reason I don't make fun of Rachel Ray anymore. It's the same reason I'm not stressing about the Angels losing to the Red Sox yet again this postseason. When you know something isn't going to be good but you participate anyway, you forfeit the right to complain.

Actually, though, this sandwich wasn't too bad. Yes, the "angry" sauce was still not spicy, just like on the other two angry sandwiches I've tried. And the jalapenos and angry onions are still inexplicably bland. But the chicken is much better than the burgers at BK, and I liked this even more than the Tendercrisp. (It also contains a couple hundred calories less than that sandwich, and probably more than that, since I took off the horrible-looking bacon.)

Like the Angry Whopper and the Angry Tendercrisp, trying this sandwich was a one-time thing for me. It's not terrible, but it's not good enough to ever eat again. But if BK comes out with another "angry" item, I am sure I will try that, too.
Posted by JustinM at 1:56 PM

It was a very nice weekend indeed. And, to top it off, Southern Cal beat those Ohioans back in the mid-east...even after playing what will probably be our worse game of the year.

Which fast food chain has the nastiest burger of all time? A special consumer report. Worst Fast Food Burger Ever