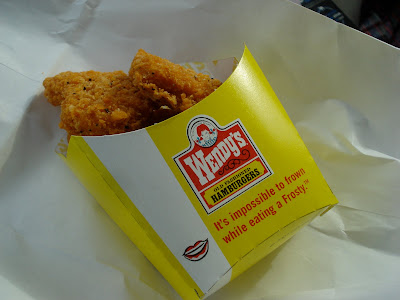 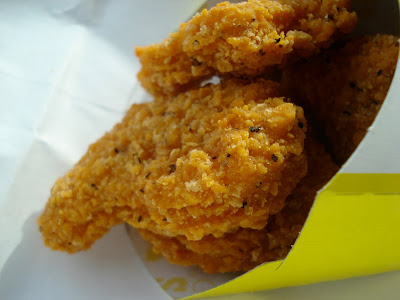 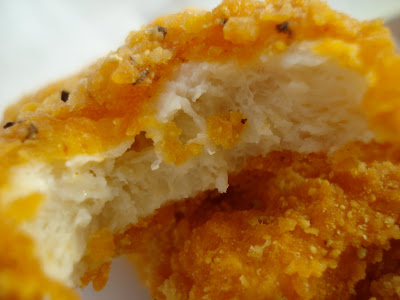 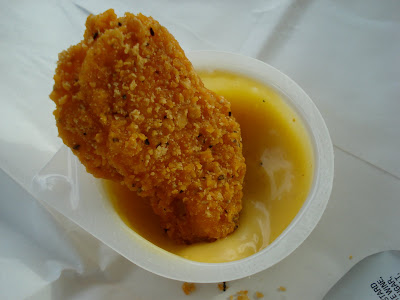 With the (spectacularly bad) exception of the Spicy Chicken Go Wrap, which, in addition to having a stupid name, was inedible, Wendy's always has good promotions. The "flavor-dipped" sandwich was so good that I kicked myself when it disappeared because I hadn't eaten it more than once. The boneless wings are decent, although not as good as the (much cheaper) nuggets. Their fish fillet sandwich was - and probably always will be - the only fast food fish sandwich that I liked.
Then I got a text the day after Christmas from a friend on the East Coast saying she had seen a commercial for Wendy's "spicy" chicken nuggets. I had not heard of these and immediately looked on the Wendy's website. There was nothing. I figured maybe it was a regional thing that they were trying out, like the KFC "Double Down" Sandwich... which I'm still not 100% convinced isn't some elaborate hoax.
So, not finding anything on the Wendy's website, and only finding a passing reference to it on a couple of websites, I did the only logical thing to do at 10:15 AM on the day after Christmas - I drove to Wendy's. (I was well rested; on Christmas Day, MLB Network generously showed all nine episodes of Ken Burns' magnificent Baseball, and I think I sat on the couch for at least 12 hours watching it.) There wasn't another customer there. Sure enough, a banner on the side of the building advertised spicy chicken nuggets. Even better, they were the same price as the regular nuggets - 99 cents. So I got an order and a drink.
I was pleased to find, when I took them out of the bag, that they are battered with the same peppers and spices as Wendy's spicy chicken sandwich, which has always been one of my favorite fast food sandwiches. Not surprisingly, they were really good. Much better than the boneless wings, and even better than the regular nuggets. And they were actually spicy. As I have written many times, I find only a fraction of the fast food items that advertise themselves as spicy to actually be spicy. I had requested some honey mustard - Wendy's honey mustard is very good - and the sweetness of it went very well with the spicy nuggets.
I haven't gone back to get any more of these. I'm sure I will one day only to be told "Sorry, we discontinued that yesterday." (Which is what happened to me when I went back to try the flavor-dipped sandwich the second time.)
Posted by JustinM at 9:34 AM

Had some last night for dinner! They were good.

I don't like Wendy's nuggets, but their spicy chicken sandwich is probably my favorite fast food sandwich. Although it's too expensive for my dollar-menu tastes, so I was excited to see a commercial about these. Had them earlier this week and was pleasantly surprised. They were really good!

Is it still 5 nuggets for a buck? If so, I think these are the best value for chicken nuggets among the junk food joints.

I think you should try these with McDonald's hot mustard .

Kelli: I know at least ten people who have told me they've tried these, and not a single person has a negative opinion.

Diana: Speaking of dollar menu tastes, I set up an email account that I don't use for anything important, and I signed up for every fast food mailing list. You'd be amazed at how many coupons and freebies you can get.

Cafe: Yes, they're still 99 cents. They are a very good deal. I'm always pointing out that just because something is cheap, it doesn't necessarily mean it's a good deal. But these are both.

Smith: Brilliant suggestion. I think I will do that after I watch Saved by the Bell and before the Jets/Bengals game.