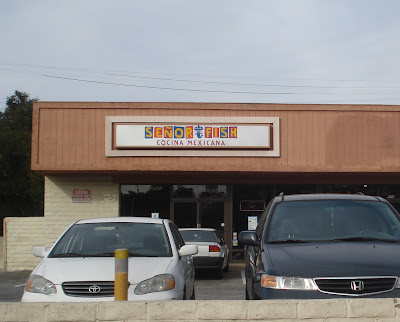 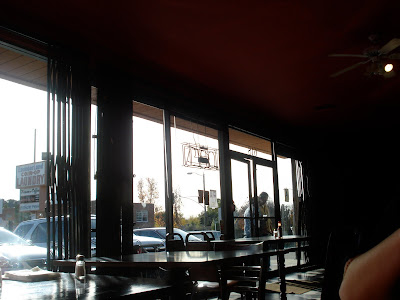 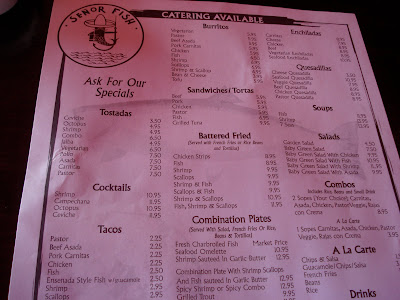 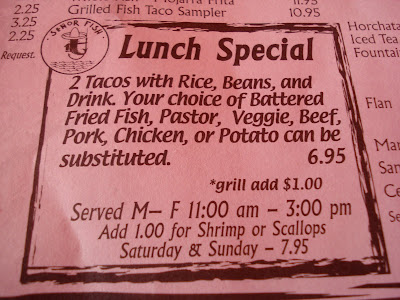 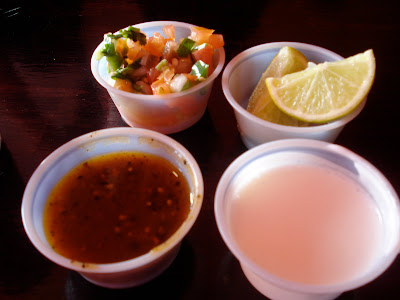 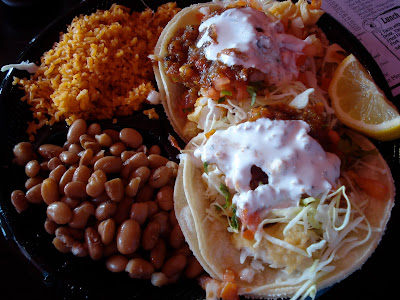 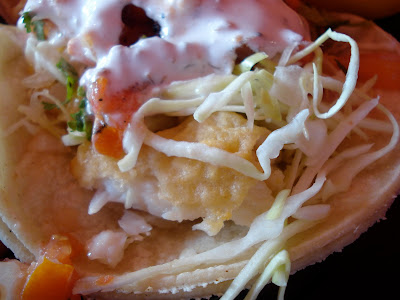 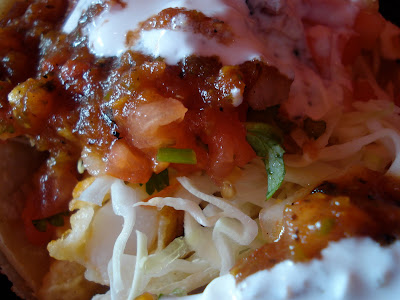 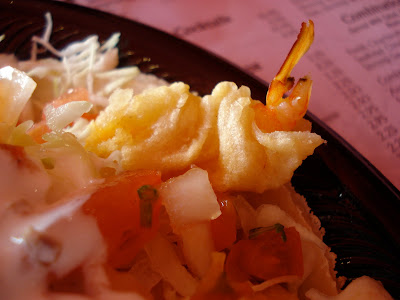 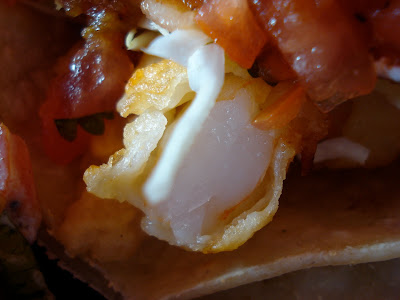 I have heard about Señor Fish for years but never made the effort to eat there. Something about the South Pas location (perhaps the unimpressive looking exterior?) has never inspired me to stop by. But since I introduced Elizabeth to fish tacos last year, we've been trying new places. So on a recent sunny day (is it just me or is this the mildest winter we have ever had?) we stopped by for a late lunch.
The interior of the building is every bit as bland as the exterior: unfinished floors, wobbly tables and the kind of chairs that used to be everywhere around my elementary school but I can't remember ever encountering in my adult life. None of this bothers me, by the way; I like formality when formality is called for, but I love diners-on-their-last-legs and dive bars, too. Senor Fish seemed like a place that doesn't put much effort into its appearance. I wondered, do they put effort into their food?
We each ordered a two-taco combo plate. Elizabeth got two fish tacos, I ordered one fish and one shrimp. We got little containers of salsa and some kind of white sauce and sat in the least-crowded part of the restaurant. They food took about ten minutes to come not, not bad at all considering how busy they were.
The tacos looked great when they arrived. As much as I love Rubio's, I admit their tacos have a certain assembly-line look to them. The Rubio's tacos I get in Pasadena look identical to the ones I get in Riverside, and I have a hunch if I were to order them in Denver they would still look the same. The ingredients in these tacos looked like they had just been prepared a few minutes earlier.
Both tacos were tasty - I liked the fish more than the shrimp - but they were also very bland. The only flavor came from the white sauce that was liberally doused over the tacos and some salsa I added. The seafood tasted fresh, but I was disappointed that there wasn't more flavor to it. After we ate, I asked Elizabeth her thoughts on the tacos, and they echoed mine. We both prefer the tempura-battered mahi mahi tacos at Sharky's.
I would certainly go back to Señor Fish and try one of their tortas, or perhaps some fried seafood combos. I liked the place, it was inexpensive and fresh and the employees were friendly. But I probably won't try their fish tacos again.
[Note: I wrote this a couple days ago; over the weekend a friend of mine told me that he likes the Señor Fish by Occidental College much better, so I might try that one day, too.]
Posted by JustinM at 12:00 PM

I've been to Sr Fish here & in Alhambra. Is Alhambra's still there? I can't recall it being memorable. So, when I think, "fish tacos", I don't think, Sr Fish.

From now on, I won't either.

I apologize. Tuesdays and Thursdays have somehow become 12 hour days for me. Totally does not fit in with my fast-food-and-happy-hour lifestyle. I got one coming up for Wednesday that is worth at least a month's worth of postings, though. (Or at least a something I would trade for a month's worth of eating,)

Try their veggie burrito some time. It’s great. The best in the world, actually. Like you said, lots of extra salsa is recommended, and salt, too. Their secret is the thinly sliced (and slightly marinated?) cabbage – somewhat unique in a burrito. I almost always get it To Go because it’s a lot nicer to sit in the park or on your own couch.